The neighborhood around Church and Walker Streets in the 1840s was still an respectable residential enclave.  The wealthy Verplanck family spent its summers in their ancestral home near Fishkill, New York, which may have prompted them to offer their city home for lease on April 7, 1843.  An advertisement appeared in The New York Herald that read "To Let--the three story house 34 Walker st, between Broadway and Church st, an excellent situation for a genteel family, occupied by Mr. Verplanck."  Around the corner, at No. 309 Church Street, was a three-story wooden house.

But as always was the case in New York, the district was to change.  On March 13, 1866 the Walker Street address appeared on the Metropolitan Board of Health's list of "filthy locations."

That same year architect and civil engineer E. J. M. Derrick left his position with the Erie Railway.  He had designed railroad stations and related structures for the firm.  On October 6 he advertised his new architectural office at No. 119 Broadway.  Among his first commissions would be an L-shaped loft building on the site of the old Verplanck house and the frame building at No. 309 Church Street.

John F. Delaplaine had hired Derrick to design the commercial building, which was being built especially for dry goods merchants Heine, Huber & Company.  Its cast iron facades were Italianate in style with large arched openings separated by simple pilasters.   By using the same foundry molds for both elevations, Delaplaine and Derrick achieved unity in design (and saved money).

Construction began in 1867 and was completed the following year.  Heine, Huber & Company may have been over-optimistic when it signed the lease, for the firm's name quickly disappeared at the address.

Simon Brill had operated his dry goods store from No. 327 Canal Street for years.  In the summer of 1869 S. Brill & Co. moved to No. 34 Walker Street.   Brill had branched into manufacturing and on September 11 that year advertised for "experienced operators for ladies' undergarments, in and out of the house."  The term "out of the house" meant that women could do piece work in their own homes.

S. Brill & Co. manufactured an array of women's apparel.  Eight months later the firm was looking for "experienced operators on ladies' white dresses; also good tuckers."  Another ad on December 15, 1872 reiterated that work could be done at home, but warned "no pay for poor work."

By October 1875 when S. Brill & Co. moved to No. 48 Lispenard Street Asher & Redlich had been in the building for at least two years.  The firm manufactured trimmings such as "ladies' silk collarettes and bows."  Unlike Brill & Co., the company insisted that work be done on the premises.  An advertisement on January 25, 1874 sought "first class operators on lace goods and rufflings, and experienced hands on Normandy caps; a few girls to learn about 15 years of age."

Those teen-aged girls who hoped to learn the trade would be disappointed.  The Financial Panic of 1873 claimed many victims and on October 15, 1875 The New York Herald announced that the operation of Asher & Redlich had been suspended with liabilities of about $70,000 (more than $1.5 million today).

New occupants included Schoals & Howell, selling agents for the Lyons Silk Works in Paterson, New Jersey.  The company moved its salesroom into the building in 1881, offering "handkerchiefs and dress goods."  Cloak maker L. Koch was already in the building and remain at least until 1887.  Another tenant was Tarlow & Baum, manufacturers and dealers in worsted and knit goods.

On February 1, 1890 Tarlow & Baum failed, but was immediately reorganized as Tarlow & Hutsching, headed by Jacob Tarlow and Thold Hutshing.   The men's optimism was short lived.  They declared bankruptcy before the year was out.   Their bad luck was echoed four months later when a sheriff's auction of the Royal Rubber Company was held.  Its owner, Shelly Jacobson faced attachments of more than $15,000.  The sale brought in less than $3,000.

At the time P. O'Doughtery & Sons had been in the building for years.  Importers of "linens, woollens, and shawls," the firm was established by Patrick O'Doughtery and now included his sons Francis and Daniel as partners.   In order to facilitate their acquisition of Irish linens, the O'Doughterys employed a representative in Ireland, Charles Malley, who routinely traveled back and forth between Donegal and New York.

Malley was a steerage passenger on the City of Rome when it docked in New York on June 21, 1891.  He was shocked when General O'Beirne, the Assistant Superintendent of Immigrants refused to allow him to leave the ship.  O'Beirne declared that Malley "had no money and was liable to become a public charge."

Word was sent to P. O'Doughtery & Sons.   A representative rushed to the dock, accompanied by two bondsmen for Malley.  Despite the endorsement and the officer to post bond, O'Beirne was adamant.  The New York Times reported that he "flatly refused to accept a bond in the case, and is reported as saying that no power this side of heaven could retain the man in this country."

O'Beirne defended his decision to the newspaper's reporter, saying that the Irishman was most likely to become a financial burden to the city.  When the reporter pointed out that P. O'Doughtery & Sons had offered a bond to ensure that did not happen, the immigration officer stood pat.  The Times reported that he said that the law "made it discretionary with him whom to reject, and that he proposed to exercise the power in this case."  Malley was sent back to Ireland.

As had been the case with so many of the tenants in the building, P. O'Doughtery was forced to declare bankruptcy three years later.  After having conducted his business for decades, the failure seems to have seriously affected the senior member.  On January 20, 1894 The Sun reported that the 80-year old Patrick O'Doughtery was in poor health "and had not been at the store this week."

Wolkovitch ran into serious trouble in September 1902 after 19-year old Frederick Blumenthal was arrested following a two-year investigation.  Blumenthal worked in the underwear factory of Henry Lewis at No. 70 Wooster Street.  Over a period of two years the factory had mysteriously been broken into and "thousands of dollars worth of goods" disappeared.  Police were baffled.  There was never any evidence of forced entry.

After Blumenthal's arrest it was discovered that he had made a wax impression of a key and had a duplicate made.   Police explained he would "return to the building after the close of business and pack the most valuable goods he could lay his hands on and drag the packages to the front door."  A truckman would remove the cartons to a storage place.

Once discovered, the teen-aged crook named his accomplices.  On September 13 Max Wolkovitch was arrested for receiving the stolen goods and selling them in his three stores, including No. 309 Church Street.

The store on Walker Street was home to Louis Feinberg's clothing shop.  He took a page from Wolkovitch's book when he sold overalls stolen from Sweet, Orr & Co. on January 10, 1906.   Feinberg enraged Judge O'Sullivan when the case came to trial on June 29.

The Assistant District Attorney asked him "Did you ever buy any such goods, bearing the marks of Sweet, Orr & Co.?"

O'Sullivan ordered him to answer the question and when Feinberg's attorney objected, the judge erupted, saying in part, "I will not allow you or anybody else to trifle with the court...I know that man [pointing to Feinberg] is lying.  No technicality of law can ever prevent me from preventing perjury from being committed here.  I would rather surrender my seat on the bench and go back to my practice than allow it."

The New-York Tribune reported "The witness seemed to wilt, and under further questioning answered that he had bought goods of this quality, bearing the name of Sweet, Orr & Co."

The following year, on July 13, 1906, M. Siegler & Sons, dealers in "woolens, silks, and cloaks," joined the long list of tenants that declared bankruptcy.  But this one would end in scandal.   After $54,000 in assets were found missing by December 1 an investigation revealed that Siegler and his sons had "drawn personal checks for $23,000; that ten days preceding the failure the Sieglers cashed checks payable to themselves for $10,300 and sold all their accounts for $6,000," according to the New-York Tribune.

On August 16, 1909 Max Siegler was arrested after disappearing to Massachusetts.  By now the total amount he and his sons had embezzled from their failing firm was calculated at $94,000--more than $2.5 million in today's dollars.

While dry good and apparel firms continued here, following World War I the building saw other tenants as well.  In 1920 Western Union had a branch office here.  An advertisement on February 16 targeted "Thoughtful Young Women" who "like to employ their minds as well as their hands.  The day is short when the mind is interested.  The new method of handling telegrams--Automatic Telegraphy--requires intelligence as well as finger dexterity.  The work possesses ever-changing interest.  The is good.  The occupation is esteemed."

In the 1930s Blanco Trucking Company had its offices here, replaced by Hochman Trucking Co. in 1944.  By then the Rose Roth Shoe manufacturing firm was in the building.  Mid-century saw Mam'selle Lingerie, Inc., Paramount Textile Mills and To-Dee Textile Co. in the building. 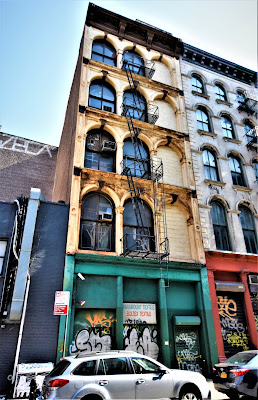 As the 20th century rolled over into the 21st, Boltex Textiles leased much of the space in the building.  Today, at a time when Tribeca enjoys its rediscovery and venerable loft buildings have been restored and refurbished, this rust-covered 1868 cast iron survivor still suffers irresponsible neglect.

photographs by the author
Posted by Tom Miller at 1:19 AM