Josiah Cleaveland Cady was 47 years old when his architectural firm, J. C. Cady & Co. started work on a string of eight speculative homes in the rapidly developing Upper East Side.  Stretching from No. 57 to 71 East 90th Street, between Madison and Park Avenues, they would target affluent families.

Completed in 1887, the handsome brownstone-fronted houses were designed in an elegant take on the Romanesque Revival style.  Cady forewent the weighty medieval elements of squat pillars, craggy stone and heavy carvings in favor of an undulating façade (the original row was formally symmetrical), planar stone layered with rough-cut bands, and a handsome arcaded parapet. 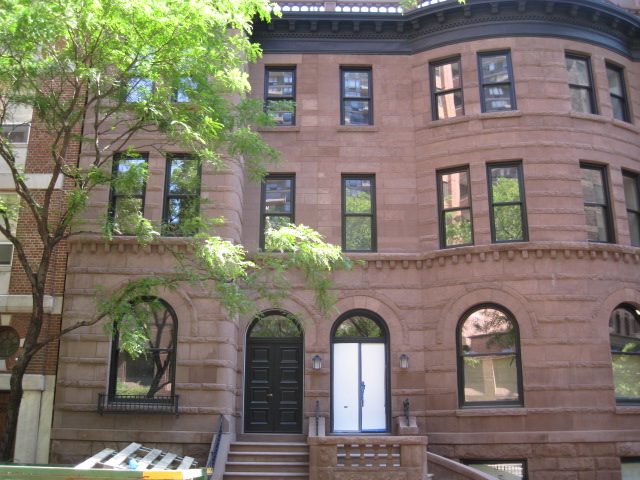 It was not over yet.  Two years later she started foreclosure proceedings and on August 17, 1896 The New York Times reported that she had re-purchased the property at $15,399.  She finally found a stable buyer in the Theodore Hachert Ward family.   Ward, his sons Edward, Frank and Patrick, and his wife Margaret would remain in the house at least until 1903.

In the meantime, the other houses along the row became home to well-heeled residents.  Hugo Sohmer lived in No. 61.  The German-born piano maker had founded Sohmer & Company in 1872 and by 1898 his firm was the leader in marketing player pianos and had produced the first modern baby grand piano.

But perhaps the row’s most colorful homeowner was Charlotte King Palmer.   Prior to 1910 she was an actress, appearing on stage as Charlotte Catherine Palmer with well-known actors like Lew Fields and De Wolf Hopper.  In addition to New York, she acted in London and Paris.

She left the stage in 1910 when she married the wealthy James C. Parrish, Jr., described by The New York Times as “former Harvard athlete and a relative of the Vanderbilt family.”  The marriage was ill-fated and ended in divorce in 1916.   Charlotte King Palmer moved into No. 59 East 90th Street a rich and thoroughly-modern divorcee.

On Monday evening, November 15, 1920 Charlotte left the house to attend a dinner party given by “the motion picture actress” Mrs. Sidney Drew.   She later told reporters she “had spent several hours dining and dancing in the Mont Matre in Fiftieth Street near Broadway.”

In 1920 wealthy women enjoying a night on the town dressed the part.  Charlotte left the 90th Street house wearing a sable opera cloak and she dripped with jewelry, including a $300,000 necklace composed of 210 pearls with a large pear-shaped pearl clasp.

In her absence, at around 8:30 p.m., three men wearing black made their way into the house.  They first surprised Charlotte’s butler, Alfredo Sazone, in his room.  After he was bound and gagged, they went to the maid’s room, waking Margaret Creevan and tying her up and blindfolding her.  The servants were taken to Charlotte’s bedroom where they were locked in closets.  They would remain prisoners in the cramped spaces for nearly 13 hours.

At around 1:00 that morning, Charlotte arrived home.  Her friends waited at the curb until she entered the house, and then drove away.   She noticed nothing out of the ordinary and proceeded to her bedroom.  When she turned on the light, she was that “the covering on her bed had been disturbed.”

The New York Times explained “She had removed her opera cloak and thrown it across a chair and was about to remove the necklace and the rest of her jewelry when she decided to call her maid for an explanation of the disturbed bed.”

Charlotte stepped into the hallway only to find three men standing there.  She demanded to know who they were and what they were doing in her house.

“Don’t become excited, lady,” said one man with a French accent.  “We are Central Office detectives.  We were called to this house several hours ago by your servants, who reported that you had been robbed.  We waited for you to return.”

Charlotte was suspicious and she ran for the stairs.   She tripped and tumbled to the landing, briefly losing consciousness.  When she came to, one of the men was ripping the pearl necklace from her neck and another plucked the diamond studded hairpins from her hair.  When Charlotte began screaming, she was gagged.

She told detectives, “They took all my jewelry from me before one of them lifted me in his arms and carried me to the bathroom on the top floor.  They were very rough at first because I continued in my effort to resist them.  I was placed in a chair, and although I complained that I thought my feet were broken in the fall, the man who spoke with a French accent commanded the man who carried me to bind my feet at the ankles and also to bind my arms at the wrists.”

As the ordeal dragged on, the French-accented thief showed compassion.  He told the man standing guard over Charlotte to remove the gag as long as she remained quiet.  When she said her back hurt, he had pillows brought to her.  Nevertheless, she could hear the burglars ransacking the house.  “I realized they were going to rob me of everything I had,” she later said.

Charlotte remained cool-headed and when she commented on the intruder’s French accent, he asked if she spoke French.  “When I told him I did, we spoke for several minutes in that language.”

As morning dawned, the house had become quiet.  Charlotte heard noises around 9:00 and her butler entered the bathroom, his hands still tied behind his back.  He had managed to force open the closet door, and work the blindfold and gag loose.  Charlotte was able to loosen the portiere cord around his wrists, and he then freed her hands and feet.  The maid was then released from her closet.

Charlotte was unable to walk (it was later discovered she had broken both feet in the fall), so the two servants carried her to the bedroom. They remained there for more than half an hour afraid to move, fearing the burglars were still in the house.

Finally the police were called and detectives arrived to find the house ransacked.  Drawers were removed and overturned; one painting had been taken from its frame but left on the floor, apparently too large to take.    Charlotte’s initial inventory came up with $500,000 in jewelry and $30,000 in furs missing; along with other valuables.  In addition to the diamond hairpins and the pearl necklace, she noticed she was missing a “platinum bracelet, set with diamonds and sapphires; platinum horseshoe brooch, set with diamonds; gold meshbag, set with diamonds; gold purse and a gold pencil.”

Within a week the estimate of the value of the stolen items had risen to $767,000.  The well-publicized crime had unexpected ramifications.  Charlotte’s maid suffered a nervous breakdown from “the harassment” of detectives.  Charlotte received scores of sympathetic letters from well-wishers.  “One was from a foreign war veteran who offered marriage and wrote that he had enough for two to live on.  He mentioned in passing that he was ‘handsome and affectionate,’ and enclosed his photograph ‘to prove it,’” reported The New York Times.

The Federal Insurance Company refused to pay Charlotte’s claim pending its “exhaustive investigation through private detectives to try to solve the mystery.”  Finally on February 2, 1921 she filed suit against the firm.  She was awarded $53,400 on the $767,000 loss.  In the meantime, she was emotionally unable to return home.  The New York Times, on December 10, 1922, said “She has given up her private house at 59 East Ninetieth Street, where the robbery occurred, and is now living at a hotel.”

On August 18, 1921 Charlotte leased the house for tree years to musical comedy star Wilda Bennett.  The actress agreed on a rent of $1,665.  It would end in an ugly court case with the two women trading insults and accusations.

When Bennett broke the lease and then failed to pay the quarterly rent due on June 1, 1924, Charlotte sued.  In court Bennett said she moved out “because her life had been threatened and the strain of living there resulted in a nervous breakdown.”

Her counter-claim intimated that Charlotte King Palmer was a loose woman.  She told the court that after she moved in she discovered “at least six male persons had keys to the premises with which they could enter at any time.”  Her claim asserted “She was thus placed in a most delicate position.”   She sued Charlotte for $4,500 for “breach of quiet enjoyment and damages for false representation.”

Wilda Bennett insisted she received blackmail letters and that to protect her safety and sanity, she was obliged to purchase a police dog and put gratings on a window.  And, she said, she was promised the house would be fully furnished with “high class furniture,” and instead she had to spend $2,500 on her own. She counter-sued for that amount as well.

Charlotte’s attorney did not directly deny the existence of house keys among several of New York's male population.  But he countered “Granting that the counter claim is not merely idiocy, just what had the keys to do with the receipt of blackmail letters!”

On May 13 the judge ruled in Charlotte’s favor and dismissed Bennett’s counter suits.

But that would not be the end of the feud between the two former friends.  On March 27, 1927 The Times reported that “A judgment for $4,000 against Wilda Bennett, actress, was filed in the Supreme Court yesterday in a suit of Mrs. Charlotte King Palmer for damages to an apartment she sublet to the actress in 1921.”   Charlotte had claimed that Wilda had ruined her “high class furniture.”

Throughout the remainder of the century Nos. 57 through 61 East 90th Street were each divided into apartments; but their outward appearance remained relatively unchanged, despite Nos. 59 and 61 receiving an unhappy coat of paint.  The rest of the row was not so fortunate and became nearly unrecognizable as part of the original group.

Then in 2008 a most amazing transaction occurred.   Mitchell Blutt purchased all three homes.   His intention was to restore the facades and create a single, expansive mansion of 17,000 square feet.  Neighbors were outraged as his plan, which included additions to the rear.  A hearing of the Landmarks Preservation Commission resulted in changes to the plans and eventual approval.  But having received the go ahead, nothing went ahead.  In 2009 the homes were offered for sale as a unit at $20 million; or individually.

Work finally got under way and in 2015.  The paint has been removed from the brownstone as engineers John V. Dinan Associates, Inc. work on creating the massive single private mansion.