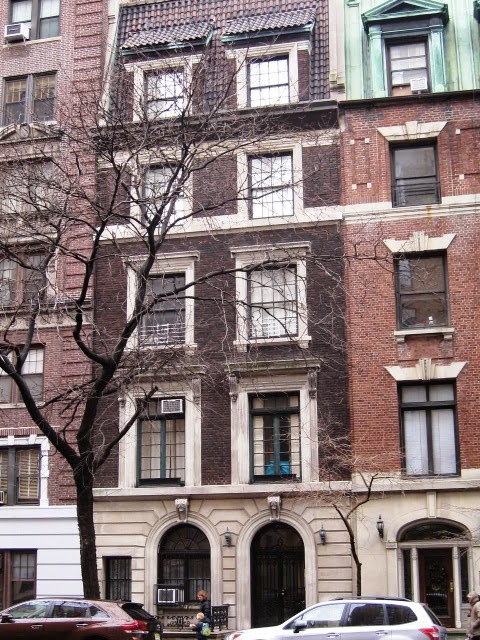 In the spring of 1910 The Real Estate Record & Builders’ Guide reported that architect Alexander M. Welch had designed “a row of 3 five-story American basement dwellings for W.W. & T. M. Hall on south side of West 86th street.”  Completed the same year, the mansions, Nos. 12, 14 and 16, were distinctively different in style.  It was a somewhat unusual move.  Architects designing rows of speculative rowhouses on the Upper West Side tended to create a harmonious flow--a sort of unit.  Welch opted instead for architectural individuality.

The architect had been hired by brothers William and Thomas Hall, known for erecting lavish, speculative homes targeted for Manhattan’s wealthy upper class.  The 86th Street mansions were the last word in modern conveniences, like elevators, but the Financial Panic of 1907 made selling the homes a challenge.  Neither 14 nor No. 16 was not sold until 1913.

No 14, a handsome Neo-Renaissance home, sat on a rusticated limestone base with the entrance a few steps off the sidewalk.  Three stories of muddy-red brick were highlighted by heavy limestone window surrounds and bandcourses; and capped by a steep tiled mansard and two dormers joined by a single roof.

While the house rose, the family of Alfred P. Gardiner was living at No. 272 West 90th Street.  Gardiner was President of the Radway Chemical Company.  Mrs. Gardiner was the former Adele Troup, whose uncle had founded the firm.  The Gardiners would move into the West 86th Street house, but the purchase was, perhaps, delayed because of the embarrassing legal problems that filled the newspapers.

Adele and her only sister, Kate Barnes, had inherited $250,000 each from the estate of their aunt, Mary Jane Radway.  Ignorant in business and finance, Kate turned over her money to Alfred Gardiner to invest, agreeing to pay him $1,000 a year for his services.  But in 1912 she sued, charging him with “fraudulent dealings” and saying that he had sold off some of her investments at cheap prices to his wife, or even to himself; and that he purchased other investments as prices she felt were “excessive.”

The Gardiners, possibly, felt that the purchase of a new mansion at this sensitive time would be unseemly.

But by late 1913 they had moved into the 86th Street house and on January 4, 1914 were ready to entertain.   That day both The New York Times and The Sun reported that invitations had been sent out for a reception and dance the following Saturday “at their new home.”

Adele, like all moneyed socialites, was involved with charities; but a few days after Christmas the following year, she went beyond the norm.  The New York Times noted on December 26 that “Mrs. A. P. Gardiner will entertain fifty children with private theatricals at her home…on Wednesday.”

Burglars found the mansions of Manhattan tempting targets during the summer months, when they knew the residents were off at country estates or resorts, and the city houses were thinly staffed.  But in 1917 thieves chose the cold winter months to hit.  On February 5 The Sun reported “Thieves skillful and petty, who have flocked to New York and given police the hardest work in years to keep down the rising tide of burglaries from homes to stores, made a large cleanup in January…Entrance to the homes has been obtained by posing as servants.  Others have used the dumbwaiters and the elevators, and in many instances on the Upper West Side the burglars have simply gone up the fire escapes and rifled the apartments at their leisure, often several at a time in the same house.”

Among the names of mansion owners who were struck in January was that of Adele R. Gardiner.

The Gardiners maintained a large summer estate, Hessian Hill, in Croton-on-Hudson, New York.   Then in November 1919 they began work on what The Sun described as “a large mountain home in the Adirondacks.”  The newspaper added, “The tract of land includes Pine Tree Lodge on the face of Big Crow Mountain, celebrated for its extensive view.”

Alfred and Adele Gardiner would remain on West 86th Street until March of 1921, when, as reported by the New-York Tribune, they “will join the east side colony.”  The house was sold to Joseph Isadore Saks of the department store family.  Joseph’s father, Isadore, had founded Saks & Co. with his brother Andrew.

With Joseph and his wife, Elsa, were their two daughters, Phyllis and Anne.  Among the staff was Helen Ness who had been with the family for three decades.  Helen’s many years of devoted service had earned her near-family member status.

Two years after Joseph and his family took over No. 14 West 86th Street, following Andrew Saks’s death, Joseph’s cousin, Horace, merged Saks & Co. with Gimbels Brothers.  It would be the first step towards the end of the involvement of Joseph’s branch of the family in the department store.  In the spring of 1926, Isadore and his two sons Joseph and Walter “withdrew from the business bearing their family name,” according to The New York Times.

Within a year Joseph Saks was admitted to the New York Stock Exchange.  Elsa chose as one of her favorite charities the Josephine Home for Anemic and Undernourished Children.  She headed the ticket sales of a benefit performance of “Private Lives” in January 1931.  Noel Coward, who not only wrote the play but starred in it, offered his services as a benefit to the fund.

Rather than summering in Newport, Bar Harbor and Tuxedo Park; many of Manhattan’s wealthy Jewish families traveled to the Adirondacks or the Jersey Shore.  Isadore Saks’s summer estate, White Lodge, was in Elberon, New Jersey, for instance, and Joseph Saks’s country place was in nearby Long Branch.  It was at White Lodge that Isadore Saks died on September 13, 1933.

Joseph inherited one-third of his father’s substantial estate, along with his personal jewelry.  Elsa received $25,000—a significant $450,000 by today’s standards—and the couple’s two daughters, Anne and Phyllis each received $20,000.

Three months later tragedy would strike the household again.  The family left West 86th Street for a weekend in Long Branch on Friday December 1, 1933.  Helen Ness, of course, traveled with them.  Now 60 years old, the servant had undergone surgery and was despondent over her failing health.

On Sunday morning she left the Saks home and “waded into the sea,” as reported by The New York Times later that day.  “The body was recovered several hours later by the Coast Guard after it had been discovered by fishermen.”  After 40 years of serving the Saks family, Helen Ness had committed suicide, no longer able to bear her ill health.

In 1948, like so many of the handsome mansions of the day, No. 14 was converted to apartments.  A doctor’s office took up the ground floor.  Today apartments still fill the former Gardiner-Saks mansion, and the doctor’s office has been eliminated.  Rather surprisingly, some of Welch’s period interior details survive.  But the exterior of the imposing house remains essentially unchanged.

non-credited photographs by the author
Posted by Tom Miller at 2:49 AM