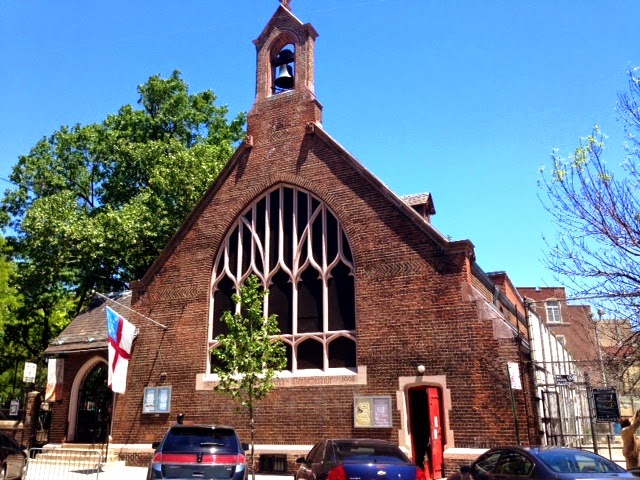 The Commissioners’ Plan of Manhattan’s that resulted in streets and avenues was published in 1811.  Within the next two decades the country estates closest to the city would be criss-crossed with thoroughfares and, in most cases, their elegant villas demolished.  But farther north the rural summer estates of the city’s wealthiest citizens would survive significantly longer.

The Bloomingdale Road, later renamed Broadway, was the major artery for travelers.  Dotted along it, roadhouses provided travelers rest and refreshment; while lanes and unpaved roads branched off toward the summer estates.  Around the convergence of the Bloomingdale Road and Manhattan Street (approximately 125th Street today), a tiny village was laid out in 1806 by city surveyor Adolphus Loss.

Called Manhattanville, it soon had a school and “house of entertainment," a market and a wharf.  The rural village attracted tenant farmers and blue collar workers.  A stage and a boat provided transportation for the eight mile trip to New York and before long a ferry to New Jersey was established.

By 1823 there were about 15 homes in the village for its mostly poor residents.  Although small, the population, augmented by the wealthy summertime residents, was large enough to warrant a house of worship.  On Thanksgiving Day, December 18, 1823 Rev. William Richmond, the rector of St. Michael’s Church in the village of Bloomingdale held a worship service in the school house.  He took the opportunity to invite residents to organize a proper church.

Although nearly all of the churches established in Manhattan's the rural north at the time were chapels of convenience—branches of established churches downtown—Richmond proposed an independent church and parish.  Wealthy merchant Jacob Schieffelin donated a plot of land 60 by 100 feet on Lawrence Street for the new St. Mary’s Protestant Episcopal Church.  The cornerstone was laid on June 15, 1824 and the little wooden structure was dedicated on October 23, 1826.

Included in the original membership rolls were prestigious names like Schieffelin, Lorrillard, Jay, de Peyster, Stuyvesant, and Lawrence.  Another was Elizabeth Hamilton, the widow of Alexander Hamilton, and her two sons.  The Hamilton mansion, The Grange, sat nearby.  Other Manhattanville residents had a harder time gaining membership.  The Minutes of the Vestry dated December 27, 1823 limited membership to “white male persons of full age, who shall for one year last, preceding the election, have worshipped according to the rites of the Protestant Episcopal Church and shall have contributed the sum of not less than fifty cents.”

Five years after its doors were opened St. Mary’s Church eliminated pew rent.  What sounds like a forward-thinking and generous move was probably simply pragmatic.  Although there were wealthy members; the majority of parishioners were poor and the pew rents were meager.  Trustees finally decided to simply forgo the rents altogether.

As the city crept northward the villages in what would eventually be clumped together as Harlem thrived.  St. Mary’s Church focused on the betterment of the Manhattanville residents.  Trustees established the Free School of St. Mary’s Church which was “open equally to all denominations;” and in 1864 opened “The Sheltering Arms.”  The New York Times described The Sheltering Arms as “a charitable institution…to give a home to children, not orphans, but who from one reason or another have been deprived of the comforts of a home.”

By the beginning of the 20th century Manhattanville was fully developed.  The little wooden church on Lawrence Street was no longer adequate for the growing congregation.  Although rector, the Rev. Hiram R. Hulse, pushed for a new building in the late 1890s, the project was delayed by a lack of funds.

Then on February 2, 1908 the New-York Tribune announced that the old building would be razed and a new church erected on the site.  The newspaper said it “will be of brick, with trimmings of limestone, of Gothic design, with a large decorative tracery window and a peaked roof, with an ornamental gablet.”

One month later, on March 8, The New York Times remarked “To-day marks the passing of St. Mary’s Episcopal Church, in Lawrence Street, near 129th Street, east of Broadway, which will, however live again in a handsome new brick and stone edifice to be erected on the old site.”

The Real Estate Record & Builders’ Guide was a bit wistful to see the venerable structure go.  Below the headline “Another Landmark to Disappear,” it reported on March 21, 1908 “The awarding of the contract to the Amsterdam Building Co, 43 West 27th st., to erect the new edifice in Lawrence st…means the disappearance of an old landmark in Harlem.  The present frame structure was built in 1823 and is one of the oldest in the city.”

The periodical credited the design to “Architects Carrere & Hastings” and predicted it would be “an attractive structure of stone and brick.”  The writer failed to name firm member Theodore E. Blake who was mainly responsible for the design.

The charming structure was completed before the end of the year.  Blake and his associates had produced a picturesque country church for what was now a bustling community.  The New-York Tribune reflected on the change in the neighborhood saying “The new St. Mary’s replaced a wooden structure constructed in 1828, when Manhattanville was a scattered village of country homes and villas on Bloomingdale Road, far to the north of the city of New York.  To-day the city has not only grown up to it, but miles beyond.”

Built of red brick with stone detailing, its English Gothic design bore some striking similarities to Renwick & Sands’ 1868 Church of the Holy Sepulcher on East 74th Street.  Blake’s structure, however, was dominated by the enormous Gothic arched window with its graceful tracery.  Atop the gable sat a quaint open bell tower crowned by a Celtic cross.  The bell from the original St. Mary’s hung in the tower.  The side porch of the church was carefully erected over the burial vault of the Jacob Schieffelin family.

Inside the architects carried out the rural ambiance with exposed beams and fretwork and unplastered brick walls.  And yet the proportions of the space resulted in a melding of the charm with grandeur.  The $35,000 cost would translate to about $856,000 today.

The consecration of the new St. Mary’s was held on New Year’s Day 1909.  A long list of clergymen assisted in the service which was celebrated by Bishop David H. Greer.  The New-York Tribune reported that the congregation “crowded the structure.”

St. Mary’s Protestant Episcopal Church drew its choir partly from The Sheltering Arms.  In 1912 the voices of twelve men and eight women were augmented by those of a dozen boys from that organization.  Choirmaster T. B. Arden was secure in his choir’s supply of young voices—it was the grown-ups that were making him nervous.  They were rampantly pairing off and getting married, threatening the continued existence of his group.

On September 16, 1912 The Sun reported that Arden “is afraid that if Cupid doesn’t leave his choir alone his church will be without music…He lost two men and two young women through marriages last week, and it is known that very soon three more engagements will be announced.”

The newspaper told readers that choir members Helen Belle and Frank Roe had been married in the church on the past Monday; and two days later soproano Mabel Quigley gave a party at her home to the choir members.  “Under the ice cream plates were found cards announcing that she had been married to William C. Blockwood.”  It was almost too much for the choirmaster to handle.

“The impending engagements, Mr. Arden thinks, will break up the choir if those concerned leave it when they marry.”
Six years after Prohibition was enacted, a strong push for repeal swept the nation.  Many of those who believed that the outlawing of alcohol would reduce taxes and better the quality of life now recognized that there was a downside.  Organized crime was rampant; hundreds of millions of federal tax revenue was lost; while millions were being spent on Prohibition enforcement.

Charles Breck Ackley, pastor of St. Mary’s, however, was unmoved.  On November 1, 1926 he stood before his congregation and addressed the growing pressure for repeal.  He argued that six years was not long enough for Prohibition to prove itself.

“A great moral and ethical question is before the American people, and especially the people of this State.  My contention is not that prohibition has as yet been proved to be the final answer, but we are in the midst of a great experiment in human betterment.  We have not had time to really try it out, even if we had whole-hearted enforcement and cooperation by our citizens.  We should be good sportsmen enough to really try the experiment, to carry it through.”
Ackley was not the first and certainly not the last rector of St. Mary’s unafraid to voice his opinion.  One of the most outspoken would be the Rev. Robert W. Castle, Jr. who took the pulpit in 1987.  By now Lawrence Street had become West 126th Street and the congregation was largely black and Hispanic.

Father Castle’s ministry was as much about social outreach as spiritual preaching.  He had marched alongside Dr. Martin Luther King, Jr. and picketed businesses that refused to hire minorities.  Among his first actions as rector was to bring in a Spanish-speaking priest so neighbors could hear mass in their language.  When the nearby Cathedral of St. John the Divine held a service honoring General Colin L. Powell and other Operation Desert Storm participants, Castle was out front with the protesters.

The fiery and determined actions of the priest resulted in the 1992 documentary film “Cousin Bobby,” in which Castle played himself.  His convincing performance led to other roles, including the father of Tom Hanks’ character, Andrew Beckett, dying from AIDS in the 1993 film “Philadelphia.”
Father Robert Castle retired in 2000 but his legacy continues on West 126th Street.  Under his direction the St. Mary’s Episcopal Center was established across the street from the church; a residence and day treatment center for people living with HIV/AIDS.  The church continues to reach out to the homeless and needy and runs a “supermarket style” Food Pantry and a mobile soup kitchen. 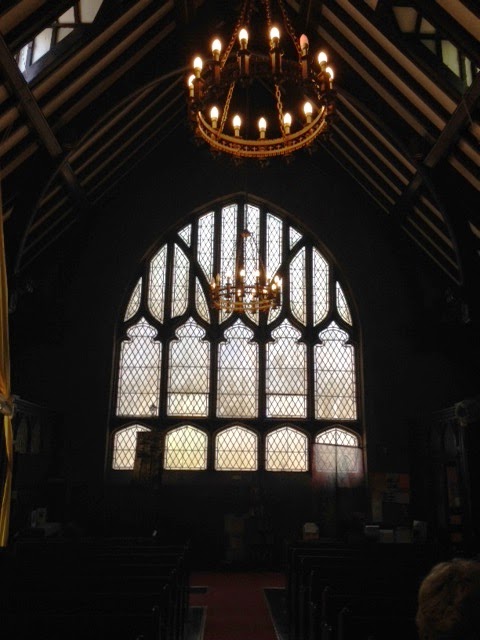