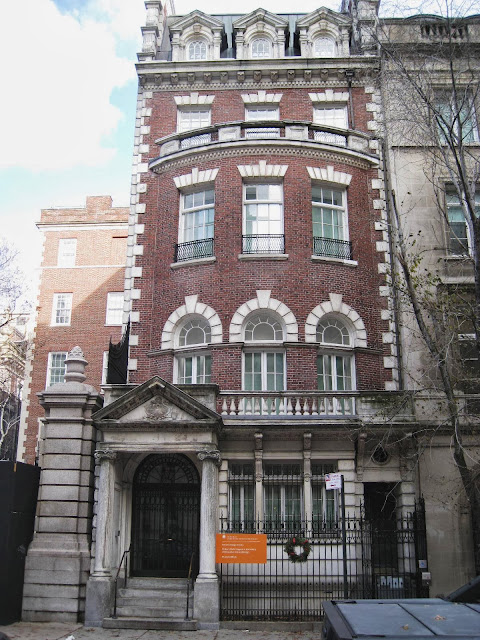 In 1902 the construction of Andrew Carnegie’s massive brick-and-limestone mansion was still a year away from completion.  The steel magnate had not only purchased the immense building lot that engulfed the entire Fifth Avenue block front from 90th to 91st Street; he purchased the surrounding land so he could hand-pick his neighbors.


There were a few, however, he could not choose.  The McAlpin family had built three adjoining brownstones at Nos. 9, 11 and 13 East 90th Street in 1888; ten years before Carnegie would start buying up land.   As the Carnegie mansion rose, its gardens spread right up to the walls of No. 9.


In 1901, following the death of David McAlpin, the family chose to “improve” the properties.  According to The Evening Post Record of Real Estate Sales, on July 18, 1902 Charles McAlpin conveyed No. 9 to his brother, George, for a “nominal” amount.  The three houses were demolished and plans were laid for two wider houses to replace them.  George would live at No. 9 and William McAlpin and his family in No. 11.


The McAlpin family had made its fortune through the tobacco industry and George would later become better known for his ground-breaking McAlpin Hotel on Herald Square.


George chose for his architect George Keister and by August plans were well under way.  The American Architect and Building News passingly announced on August 30 that McAlpin was planning a “five-story brick dwelling, 26’ x 92’8”, tile roof, $45,000.”  The cost would translate into about $1 million today.


The Carnegie mansion and the two McAlpin residences were completed almost simultaneously.  George L. McAlpin’s new home at No. 9, like the Carnegie residence, eschewed the gushing limestone or marble Beaux Arts facades of most other Manhattan millionaires.  Three floors of red brick sat on a rusticated base of white marble, embellished by a  handsome columned portico.  A two-story bowed front provided a balcony to the fourth floor and a stone balustrade protected the mansard roof with three stone-framed dormers.   The stone quoins, splayed lintels and broad, narrow chimneys brought a slice of Mayfair to East 90th Street.


The McAlpins moved in with their four children and six servants.  There were five maids—a “waitress,” house maid, chambermaid, kitchen maid and a parlor maid—a laundress and a cook.  George McAlpin also had a chauffeur who apparently lived elsewhere.


With three young daughters in the house, it would not be long before Mrs. McAlpin was busy with debutante entertainments.  On January 22, 1909, the “fancy-dress dance” in the house was not for a daughter, but a niece, Gladys C. McAlpin.  Seventy-five young people filed into the mansion around 10:00 that night.  “the young women wore fancy dresses and masks and the men wore masks,” reported The New York Times.  The dancing continued until 2:00 in the morning with supper being served at midnight.


The following year it was daughter Jeanette’s turn in the spotlight.   On December 21, 1910 the McAlpins hosted a dance and buffet supper at the Plaza Hotel.  Entertainments among Manhattan’s wealthy were normally late-night affairs and The Times noticed that “The dance was an early one, the guests being asked to come at 9.”


Daughter Flora was among the debutantes in 1913 and once again the East 90th Street mansion came alive with December teas and receptions.  Four months later a “large reception” was held in the house  following the Fifth Avenue wedding of Jeannette to A. Musgrave Hyde.   But before that the bride-to-be gave her last large entertainment in her parents’ house.  The Sun reported on April 19, 1914 that “Miss McAlpin will give a theatre party tomorrow night, to be followed by dancing at her home.”


The joy of the fashionable St. Thomas Church wedding would be short lived.  Jeanette’s health declined and towards the end of 1916 she was back in the mansion at No. 9 East 90th Street.  On December 11, 1916 The Sun reported that the 24-year old Jeannette had died in her parent’s home.  Saying that she “was a member of a family prominent in this city for the last eighty years or more,” the newspaper noted that “She had been in ill health for some time.”


When Dorothy McAlpin became the bride of Aldred D. Bell, she chose to have an intimate ceremony in the 90th Street house followed by a wedding breakfast.  The New-York Tribune noted on May 4, 1919 that “The house was attractively decorated with spring flowers, asparagus ferns and palms.”


Dorothy’s new husband had just returned from serving in the war as a Lieutenant in the Ordnance Departments, stationed at Camp Hancock.


It was the last McAlpin entertainment in the mansion.  On June 5, just a month after Dorothy’s wedding, The Sun reported on “the sale of the handsome George L. McAlpin residence.”  The newspaper mentioned that “The McAlpin dwelling adjoins the Andrew Carnegie property on the north corner of Fifth avenue and Ninetieth street, and its north and west windows overlook the elaborate private garden which surrounds the Carnegie mansion.” 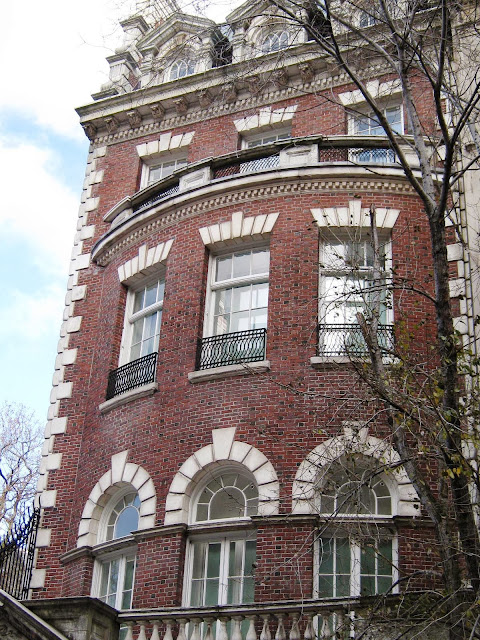 It would be a full year before the buyer was known—Mrs. Andrew Carnegie.  On May 29, 1920 the New-York Tribune reported that “Mrs. Andrew Carnegie, following in the footsteps of her husband, is determined that no objectionable neighbor locate too near her home, which occupies the greater part of the block bounded by Fifth and Madison Avenues, Ninetieth and Ninety-first streets…Mrs. Carnegie made the purchase to insure against an undesirable neighbor.”


The McAlpins moved to an apartment at No. 400 Park Avenue and in their place Louise W. Carnegie chose a decidedly desirable neighbor—her daughter, Margaret.  The only child of Louise and Andrew Carnegie, Margaret had married Roswell Miller, a Navy officer, on April 22 the year before.  Now the former McAlpin mansion was being extensively renovated for the newlyweds.  Included in the alterations was a doorway in the west wall that gave the new homeowners access to the Carnegie gardens.


Roswell was offered lucrative positions in the steel and financial industries by his deceased father-in-law’s associates.  The Pittsburgh Press reported that “It is related that Charles M. Schwab, who attended his marriage with Miss Margaret Carnegie, wanted him to join the Bethlehem Steel Co., and that J. P. Morgan & Co. also told him a place was ready for him at Broad and Wall sts.”


The 27-year old preferred, however, to follow his own dreams and make his own way in the world.  Rather than accept the high-paying positions, he took a job teaching engineering at New York University for about $2,000 a year.


The New-York Tribune said on March 23, 1922 “The young husband of the Carnegie heiress has made it evident ever since his marriage that he would not deviate from his lifelong ambition of becoming a civil engineer, in spite of the millions that were his to command.”


Nevertheless, life was not hard for the Millers.  Their lifestyle was evidenced by the note on the society page of The New York Post on Thursday, May 28, 1935.  “Mr. and Mrs. Roswell Miller and their children, Roswell Miller, 3d, and the Misses Louise, Barbara and Margaret Miller, of 9 East Ninetieth Street, are sailing tomorrow in the Franconia for Glasgow, Scotland.  As is their custom they will pass the summer at Skibo Castle, the home acquired by Mrs. Miller’s late father, Andrew Carnegie, and occupied every year for several months by his widow and daughter, Margaret, with the latter’s husband and children.”


Back at home both Roswell and Margaret were active in the Spence School.  He was national chairman of the Spence School fund when the institution was planning a new structure; and Margaret sat on the executive committee.  She hosted a tea in the 90th Street mansion in March 1929 to discuss plans for the new $1 million building.


After two decades in the house the Millers left in 1940, the Princeton Alumni Weekly saying “The Millers have given up their house at 9 East 90th St. in New York, and are living at Migdale House, at Millbrook.” By now Margaret was a trustee of the Carnegie Corporation.


The mansion became home to The School for Nursery Years.  The organization had been founded that year by the staff of the former Harriet Johnson Nursery School.


In 1972 the Carnegie Corporation donated the massive Carnegie mansion along with the McAlpin house to the Smithsonian Institution for use as the Cooper Hewitt National Museum of Design.  Deeming the McAlpin mansion “a small neighboring townhouse” the United States House Committee on Appropriations said “The Museum plans to renovate and expand the adjacent Miller House.” 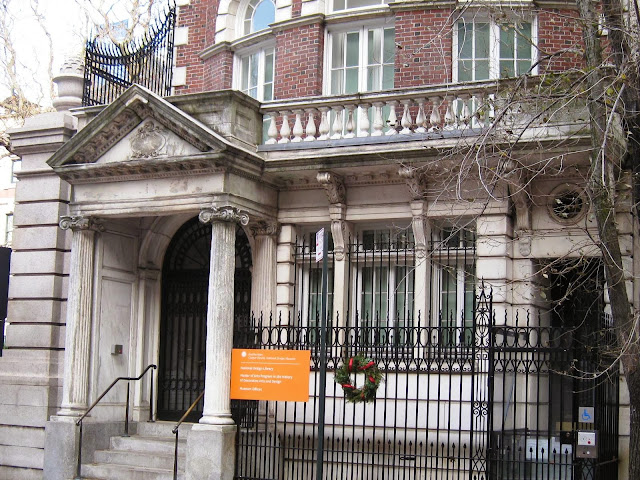 Little has changed to the exterior of George L. McAlpin’s neo-Georgian townhouse.  In 1996 a renovation was initiated by the architectural firm of James Stewart Polshek & Partners that connected the two houses internally.  But outside the refined home looks just as it did when three magnificent mansions were completed within the same year.