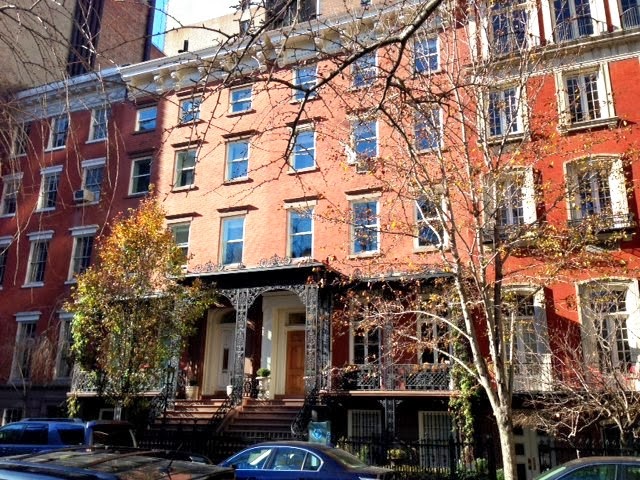 Samuel B. Ruggles’ ambitious project of transforming a marshy portion of James Duane’s former country estate into an exclusive residential enclave was well underway by 1844.  By now Gramercy Park was laid out and encircled by a heavy iron fence, and the first planting had begun.  Around the perimeter 66 building lots were plotted; intended for high-end homes of the wealthy citizens who were already abandoning the similarly-designed St. John’s Park to the south.

That year James Harper, Sr. stepped into the office of Mayor of New York City.  Harper, with his three younger brothers, had founded the publishing firm Harper and Brothers in 1817.  (His company would later become Harper & Row and finally, HarperCollins.)  While Harper served his three-year term, the first houses around Gramercy Park began rising.

Among them were Nos. 3 and 4; built as mirror image Greek Revival mansions.  The 26-foot wide homes exhibited all the expected architectural elements of fine residential structures; but they would not have been exceptional without one magnificent detail—their combined porches.

Architectural historians generally agree that the ornate cast iron porches were designed by one of the period’s most important architects, Alexander Jackson Davis.  Intricate, lacy arches supported a roof that stretched the width of the two homes, providing a shady refuge on summer evenings.  Because the houses faced east, by mid afternoon the porches would be fully shaded.  The railings spilled down the shared stoop from a central pavilion that projected slightly forward and stood higher than the flanking sections.

At the end of his term as 65th Mayor of New York, James Harper moved into No. 4 with his second wife, Julia.  With him came the mayoral lampposts.

In the days of the Dutch Burgomasters, two lantern bearers would escort the Burgomaster home at night.  The lit lanterns were then left outside the residence as a sign that Burgomaster was at home and boisterous citizens should not disturb him.  The custom evolved into two gas lanterns which adorned all New York mayors’ residences for life.

John Harper, Sr. died in 1869; but the family continued living on in the Gramercy Park mansion.  In the meantime, next-door neighbor Benjamin Franklin Lee was making a name for himself in legal circles.

Lee was born in New York in 1839 to a family with deep Colonial roots.  He was a descendant of Thomas Lee, one of the settlers of Lyme, Connecticut, who landed in 1641.   On his mother’s side he was a member of the Lawrence family; one of the most well-known and esteemed families of the city.  By the time of John Harper’s death, he had established himself as one of the leading real estate and patent lawyers in the country.

Benjamin Franklin Lee had purchased No. 3 Gramercy Park in 1866.  The highly-successful bachelor lived here alone with his servants until 1871 when he married Mary Ray King.  Like her new husband, Mary came from what The New York Times referred to as “old Revolutionary stock.”  She had the unlikely pedigree of the King family on both sides.  Her father, James Gore King was a banker, descended from John A. King the former Governor of New York.  Her mother was the great-granddaughter of Rufus King, the first American Minister to England.

The Lees would have four children in the house—James Gore King Lee, Franklin Lawrence Lee, Eliot Lee and Caroline King Lee.  In 1883 Benjamin was appointed professor of real estate and equity jurisprudence in the Law School of Columbia.

Mary Lee’s busiest social season would be the winter of 1894 when daughter Caroline made her debut into society.  It was a particularly difficult debutante year for Caroline to shine—other debutantes that year were the daughters of the Cornelius Vanderbilts, the Anson Phelps Stokes, the J. Hampton Robbs, and the Kiliaen Van Rensselaers, among other socially-elite names.  Nevertheless the receptions and teas at No. 3 Gramercy Park held their own in the society pages.

Three years later, on Thursday evening, June 3, 1897 Mary Ray Lee suffered a heart attack in the house and died.  The funeral of the 49-year old woman was held at Calvary Protestant Episcopal Church, just around the corner, the following Monday.

Somewhat surprisingly, Benjamin Franklin Lee almost immediately embarked for Europe on business.  He traveled throughout Italy, Switzerland, Germany, Holland, and England to garner “observations of European opinions on political conditions in the United States,” according to The Sun later.

Upon his return in October, he gave reporters a grim assessment of the state of things.  “My view of the present situation is that it is a very grave one…I found that the spirit of unrest which here takes the name of Bryanism was to be found to an alarming degree in Europe.”

Lee attacked William Jennings Bryan mercilessly.  “The forces of Bryanism are as defiant as ever and are attacking the very foundations of civilization itself.”

By now widowed Julia Harper and her unmarried daughter, Elizabeth, shared the mansion at No. 4.  During James Harper’s administration the massive Croton Reservoir had been completed which brought fresh water to the city’s residents.  In 1899 as the demolition of the hulking Egyptian Revival structure neared, Elizabeth was invited to remove mementos to adorn the Gramercy Park home.

On June 22 The Times reported that “Miss Harper…drove to the reservoir yesterday to select some of the trees and shrubbery, in answer to an invitation sent her by the contractors who are demolishing the place.  Miss Harper selected a number of trees and vines which she will have transplanted in the garden of her home.”

On April 25, 1902 Julia A. Harper died in the house at No. 4 Gramercy Park.  The Evening World mentioned that “The old residence and the residue of the estate goes to the two daughters, Mrs. Julia T. H. Millard of Paris, and Elizabeth Fletcher Harper.”  Julia’s estate of about $80,000 would amount to around $2 million today.

Before long sweeping changes would come to the two matching Gramercy Park mansions.  On March 3, 1907, after a long illness, Benjamin Franklin Lee died in his home at the age of 68.  Within months the mansion had been converted for use by the National Training School of the Young Women’s Christian Association.  Here courses such as “Public Speaking and Parliamentary Procedure” were given.  The school said it “Prepares young women for executive positions in the association.”

The dean of the school, Caroline B. Down, resided in the mansion, as did another associate, Charlotte H. Adams.  The school would operate in the house until 1912.

Meanwhile, in 1909 when Mrs. Caroline S. Harper, apparently a relative, leased her mansion at 5th Avenue and 46th Street to Charles Thorley, “a florist,” Elizabeth Harper rented the Gramercy Park residence to her. 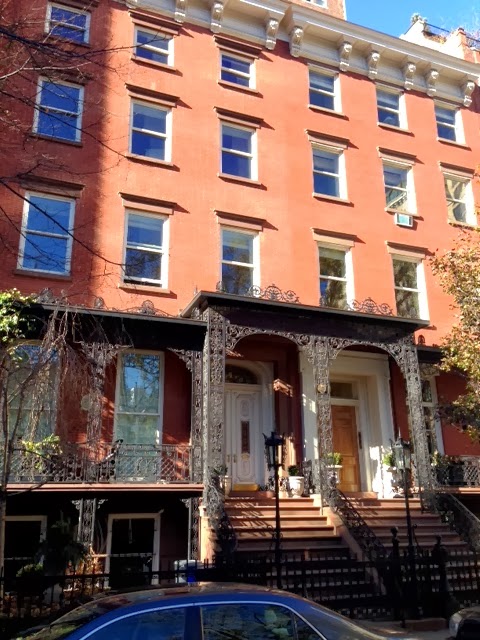 While the Harper mansion held out as a private home; No. 3 became a men’s club.  In 1903 The Netherland Club of New York had been formed for men with Dutch ancestry.  In 1912 it purchased from the Lee family the mansion that the Women’s Christian Association been using.

The Netherland Club retained the upper floors as sleeping rooms for members; such as Antonio Surie, Jr. who suddenly needed a place to stay in 1921.  Surie’s wife kissed him good-bye in the fall of 1920 as she left for Europe.  The problem was that Mrs. Surie did not go to Europe; but instead went to an apartment on West 69th Street.  She stayed there with “a man not her husband,” according to The New York Times.

The man who was her husband found out.  He served his wife with divorce papers and he moved into the Netherland Club while his problems were sorted out.

In 1939 the Netherland Club sold the former Lee mansion to architect Eugene Schoen as it prepared to move to its new headquarters in the Holland Building in Rockefeller Center.  Schoen made his intentions for the once-proud home immediately public.  The house, said The New York Times on June 2, “will be converted into small apartments.”  The architect told reporters that “One and two-room kitchen and kitchenette apartments will be made out of the old building and are expected to be ready in September.”

The mansion was divided into two apartments per floor and immediately attracted a list of artistic residents.  In 1941 former silent film actress and author Martha Sleeper moved in.  Author and journalist Elizabeth Jordan was a tenant in the 1940s.  She was editor of Harper’s Bazaar from 1900 to 1913.  She died in the house on February 24, 1947.

Actress and interior designer Iris Whitney was a resident of No. 3.  In 1952 film star John Garfield separated from his wife and a week later suffered a fatal heart attack in Whitney’s apartment.  The already-uncomfortable situation became more so when police arrived to prepare a death report.  Fearing that the men at the door were reporters, Whitney refused to open it.  Reportedly a hour-long standoff resulted in the apartment door being broken down.

The following year the house next door, like its neighbor, was converted to apartments.  Both of the remarkable homes received subsequent renovations; yet their exteriors remain virtually untouched.  The extraordinary cast iron porches bring to mind visions of summer evenings with the Lee and Harper families gazing out at the tranquil park as nightfall approaches.

non-historic photographs taken by the author
Posted by Tom Miller at 3:22 AM