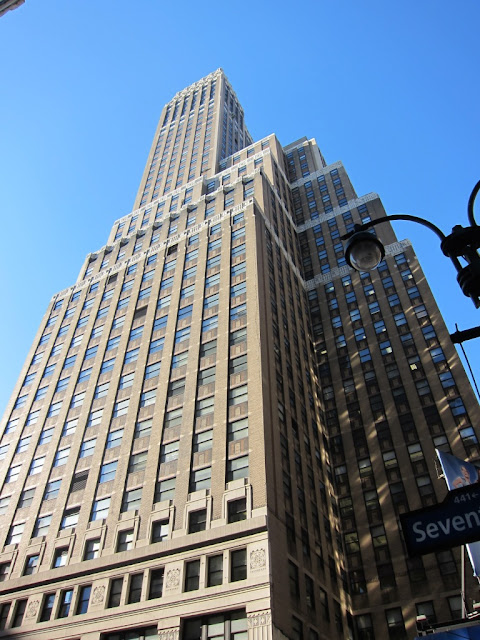 As H. Craig Severance’s new Bank of Manhattan building at 40 Wall Street was completed near the end of 1929, the structure’s backers joyously pronounced it the world’s tallest building—a distinction long held by Cass Gilbert’s Woolworth building.  The elation of Severance, his assistant architect Yasuo Matsui, and the financial supporters would be quickly cut short.


Having studied both domestically and in France, Severance had started his architectural career in 1900 when he worked in the office of his cousin, the esteemed architect Charles A. Rich.  He later worked for the firm of Carrere & Hastings, and eventually formed a partnership with William Van Alen that lasted from 1914 to 1924.  Although the working relationship ended, the two architects remained good friends, according to The New York Times years later in 1941.  That friendship may have been slightly taxed when Van Alen’s Chrysler Building inched higher and higher in the days after 40 Wall Street was completed.


Severance’s Bank of Manhattan building soared 71 stories to 927 feet—including the flagpole that was slapped on at the last minute to add extra height.   Van Alen now realized that his unfinished Chrysler Building would top off at around the same height so he designed and secretly constructed within the crown of the building a 185-foot Art Deco spire.   In November, shortly after Severance’s 40 Wall Street was proclaimed the world’s tallest building, the spire or “vortex” was hoisted to the top of the Chrysler Building.  Van Alen’s Art Deco masterpiece now measured 1,048 feet—overshadowing not only 40 Wall Street, but the 1,024-foot Eiffel Tower.


With towering skyscrapers popping up around Manhattan, some developers were seemingly thumbing their speculative noses at the Great Depression.   Among them was Julius Nelson.   The developer had erected three buildings in the Garment District since 1920—No. 129 West 29th Street, No. 247 W. 38th Street and No. 147 W. 35th Street.   The Depression did not slow his pace.


Nelson commissioned Severance to design a towering office building at the lower hem of the Garment District, steps from Pennsylvania Station.  Despite the economy, Nelson was bullish on the site’s potential.  “The Pennsylvania Terminal area cannot escape great commercial development,” he told a reporter from The New York Times.  “There have been evidences of this in recent years with the completion of such projects as the Pennsylvania and Equitable Life Assurance buildings and the Hotels New Yorker and Governor Clinton.”


The new building would be marketed to the garment industry; but would be unlike any of the many loft buildings that housed small manufactories.   “The building is designed to produce the most efficient and economical subdivision arrangements, including a novel advantage for large textile factors who, as tenants of the building, within a short distance of the garment sections, will have special showroom facilities on some of the lower floors.  Manufacturing or retail garment trading will not be conducted in the building.  It will be primarily an office building.”


Nelson’s ambitious new project was projected to cost $10 million and ground for the 45-story tower was broken in March 1930.   The oddly-configured site covered five plots on West 34th Street (Nos. 203 through 211), eleven lots on Seventh Avenue (Nos. 440 through 460) and No. 208 West 35th Street.  Perhaps to the annoyance of Nelson it did not include the site of the stubborn little National City Bank building at the corner of 34th Street and Seventh Avenue.


By November the 400,000 square foot building was nearly completed.   Rising 560 feet from the sidewalk it was, as The New York Times called it, “one of the dominant structures of the westerly midtown district.”  Severance sat the towering brown brick building on five stories of white limestone.   He emphasized the verticality of the skyscraper by extending piers three stories tall above the street level.

Unlike the Chrysler and Empire State Buildings, there was little of the expected Art Deco ornament—zig-zags, stylized lightning bolts and waterfalls.   The capitals of the stone piers approached iconic Art Deco designs.  But the embossed metal panels between the piers blossomed with stylized flowers and the carved stone segments separating the fifth story windows held geometric wheels similar to Pennsylvania Dutch hex signs.


Julius Nelson named the new building, which opened for occupancy in February 1931, for himself:  Nelson Tower.   His confidence in the neighborhood and the newly-completed building was strengthened when the Waldorf System, Inc., which operated a chain of restaurants, signed a 21-year, $1.5 million lease on July 31, 1931.   The new restaurant would extend 52 feet along the Seventh Avenue front.  Later that year, in October, The National City Bank added to the office space in its own now-engulfed corner building by taking part of the second floor in the Nelson Tower.  At the same time Glenerry Woolen Company leased 5,000 square feet.   Yet the building was still only 62 percent rented.

Julius Nelson’s confident spirit in the face of a great national economic depression was finally broken when three years after his Nelson Tower opened its doors it was sold in foreclosure proceedings.   In addition to a lien of $2.5 million, Central Hanover Bank and Trust Company held a mortgage of nearly $2 million.


While Julius Nelson had been busy developing the district, so had Samuel Kaufman.  The Times called him “a pioneer in the development of the Penn zone and the garment district.”   In 1945 he was one of the largest property owners in the neighborhood.   In December of that year he added to his holdings by purchasing Nelson Towers for around $4.2 million.   The Waldorf restaurant was still in the building, as was National City Bank, joined now by large concerns including Burlington Mills, New Jersey Worsted Mills, the Carnation Company, Lever Bros., the Philco Radio Corporation, Loft Candy Corporation and more than 90 textile firms.


Kaufman formed the 450 Seventh Avenue Corporation for the purchase of the building and two decades later it still held the property.  On November 3, 1963 the firm announced intentions to renovate and update the 30-year old structure.   The New York Times reported that “A two-story entrance lobby [is] being built on the Seventh Avenue side and the entrance is being framed in polished granite.  One side of the entrance and the ceiling are being faced with blue pear granite, iridescent with pearl in dark blue.  A contrasting light granite faces the other side of the entrance.”


“In place of the ornate, chandelier-equipped lobby of the original building,” reported The Times, ”the remodeled premises has white marble side walls, a blue mosaic rear wall and bronze fittings…The ceiling is covered with fluorescent panels equipped with irregularly shaped bronze fins that diffuse the light.” 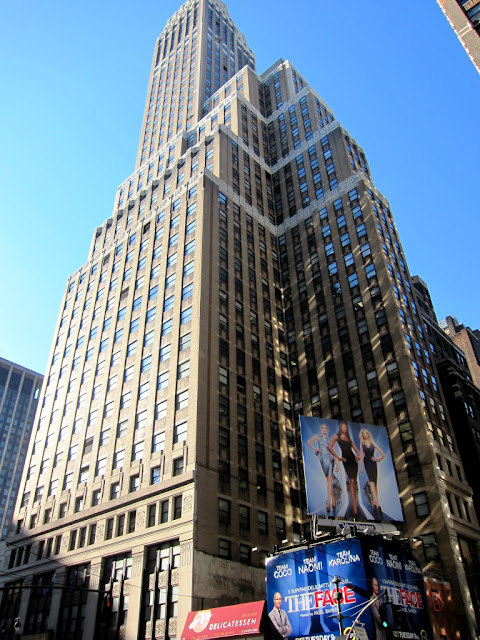 Unlike the architects he worked alongside—Carrere & Hastings, Van Alen, and Charles Rich—H. Craig Severance’s name is relatively unknown to most.   Yet his 1931 Nelson Tower remains “one of the dominant structures of the westerly midtown district” and a monument to his work.

photographs taken by the author
many thanks to Joel Weisinger for requesting this post
Posted by Tom Miller at 2:48 AM