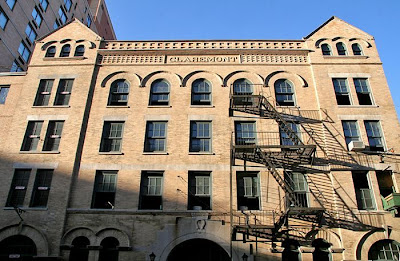 By 1892 houses and apartment buildings were quickly rising on Manhattan’s Upper West Side. Central Park, completed in 1873, lured developers who built rows of comfortable brownstone residences and luxurious apartments like The Dakota on Central Park West and 72nd Street. The newly established residents all needed adequate stable facilities for their horses and carriages.

On 89th Street, a block and a half from the Park, Edward Bedell erected a handsome stone livery stable. Designed by Frank A. Rooke, whose reputation was made designing stables, the Claremont was five stories tall and boasted an ingenious system of ramps that connected the floors – allowing horses and vehicles to be housed in the basement and on the second floor. Large elevators hoisted more carriages to the upper floors. In all there were 135 stalls for boarding horses.

The unpretentious buff brick building used limestone trim to accent its restrained Romanesque Revival style. A stepped stone arch with a carved horseshoe framed the main entrance. Inside Rooke provided a small riding ring which proved to be somewhat unrealistic. 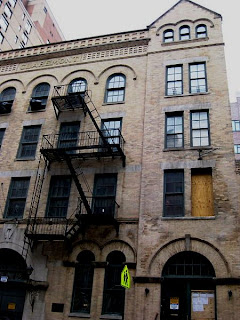 When completed, Bedell sold the Claremont to millionaire Charles F. Havermeyer, who in turn leased it to the Tallman brothers, Lee and Darius. The brothers operated another livery stables, the Cedarhurst.

Within a decade more automobiles and fewer horses populated New York’s streets. One by one the boarding stables either closed or were converted into garages; as happened to the Cedarhurst in 1910. The Claremont hung on, however.

On January 6, 1928 the then-current owner, Emil Wellner, made an eyebrow-raising announcement. The Claremont was to become a riding academy. Aspiring equestrians were given both private or group lessons in dressage and jumping from a staff of between 15 to 20 instructors. Veteran riders could rent horses for an afternoon ride on Central Park’s bridle path; after negotiating Manhattan traffic from the academy to the park.

Despite the comfortable success of the Claremont Riding Academy, Wellner had bigger plans. Nine years later, in 1937, he filed plans with the city to raze the building and erect a garage. The plans were rejected because the proposed garage was too close to a public school. The Academy lived on.

Wellner sold the Academy to his bookkeeper, Irwin Novogard, in 1943. The building was threatened again when, in 1956, the city proposed a major urban renewal project that would replace the existing buildings in the area with a large public housing project. Within the decade dozens of buildings had been acquired through condemnation, including the Claremont, and many razed. The Academy clung on, existing on a by month-to-month lease. 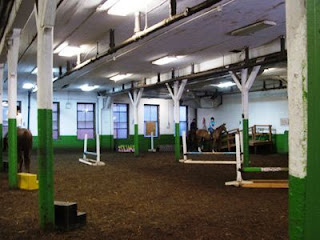 The fiscal crisis of 1977 forced the city to abandon its public housing designs. Novogard’s son, Paul, quickly sought landmark status from the New York Landmarks Preservation Commission in an effort to prevent any further threats to the building.

All the while young riders were still taking their lessons at the Academy and stalwart horsemen and women braved New York Traffic to ride in Central Park.

Landmark status came in 1990 and, finally, the city sold the building back to Novogard in 1998, 37 years after condemning the structure. A $2 million restoration followed which unfortunately resulted in heavy costs to the Academy in increased real estate taxes and property insurance. And yet the Claremont Riding Academy, the oldest stables in Manhattan, plodded on. 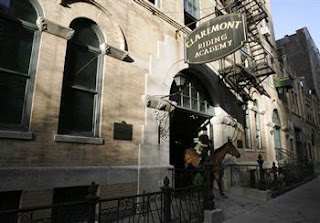 The death blow came for the Academy unexpectedly -- not from the threat of the wrecker’s ball but from the Commissioners of Central Park. The deep cinder bridle paths had historically been maintained solely for the use of horses. But shortly after 2000, the park allowed bicyclists, joggers and pedestrians on the paths and, worse yet, discontinued maintenance. With new congestion – what Paul Novogard termed “a fearful running of the gauntlet” -- coupled with the lack of maintenance, riders could no longer canter along the trails. Patronage at the Claremont fell off.

The New York Times commented, “At the very least, the closing of the Claremont stables means that Manhattan is a less surprising place…And so we will never again walk along West 89th Street and be overcome by the deeply nostalgic smell of horses, and may never again have the surprising pleasure of coming upon a horse and rider in the park…New York is certainly a human city, filled as it is with humans. But the loss of this stable makes us wonder whether the city wasn’t more human still when we shared so much more of it with horses.”

After plans to convert the building to apartments fell through, it was purchased by the Stephen Gaynor School, a private school for children with learning difficulties.
Posted by Tom Miller at 2:33 AM