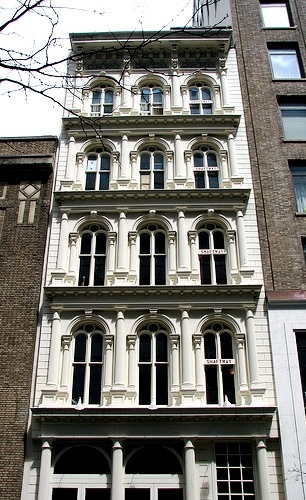 Photo epicharmus.com
In the years prior to 1860 the commercial district was still in the downtown section of Manhattan. Here, in 1848, John Bogardus designed, produced and installed a cast iron façade for the John Milhau’s new pharmacy at 183 Broadway, between Corland and Dey Streets.

The great fires of 1835 and 1845 that decimated the lower portion of Manhattan created a near-paranoia among merchants and developers. Bogardus’ new concept of facing buildings in an incombustible material was ground-breaking and exciting.

In addition, Milhau’s drugstore which featured soaring piers with Doric columns at every floor, applied ornamentation and an elaborate cornice frieze was constructed in the span of three days.

Bogardus was on the way to fame and success. The inventor who only a year earlier was hawking his cast iron “eccentric sugar mill” and who listed himself in the city directory as “eccentric mill maker,” was now an architect and structural façade founder. 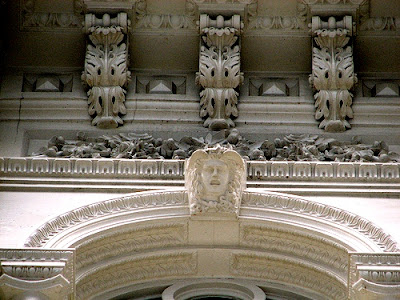 Photo epicharmus.com
In 1858 Bogardus manufactured the commercial building at 75 Murray Street. By now his facades had become more ornate and visually appealing and this new building had all the bells and whistles. Italianate in style, each of the five stories was separated by deep cornices supported by modified fluted Doric columns. Fearsome Medussa head keystones capped the window arches on the third and fifth floors below elaborate leafy knee brackets.  Rolling iron shutters, devised by Daniel Badger, were installed over the street level entrances and windows that could be lowered at night for total security.

Bogardus created, for a relatively low cost in an extremely short construction time, a sumptuous building.

Brothers John and Francis Hopkins established their glassware business on the first floor while among the tenants on the upper stories was John F. C. Thielemann’s importing business.

In 1874 General Francis Darr manufactured “fancy soaps” at 75 Murray. In his employ was young James R. Washington, a clerk and bookkeeper. In June of that year Washington quarreled with the building’s porter, Joseph Pfohl, drew a revolver and shot the janitor in the right knee.

Pfohl was quickly transported to St. Vincent’s Hospital in a carriage and, despite Darr’s attempts to cover up the shooting, Washington was arrested by Detective McDonnell shortly thereafter. Darr bailed out his employee for the astonishing amount of $1000, explaining that the boy was General George Washington’s last direct descendant.

By the turn of the 20th Century the building was owned by the Heyman Brothers who held significant property in Manhattan.

Various tenants moved in and out of 75 Murray throughout the 20th Century and the wear and tear of a century and a half of use was evident when George and Christiane Aprile first saw it in 1992. The couple’s son, Matthew, would be attending nearby Stuyvesant High School and they needed a home closer than their Brooklyn neighborhood.

When they purchased the building for $635,000 the following year it had “no windows, no water, no electricity – just a façade,” according to Aprile. The couple immediately sought to restore the façade of the landmarked building.

Within the architectural community, a confirmed Bogardus building is the baseball card equivalent of an Honus Wagner. In his 1956 book “Bogardus Revisited,” Turpin C. Bannister said “For most historians, the prophet, apostle, and patron saint of Ferromania has been James Bogardus.”

The New York Landmarks Preservation Commission had carefully avoided attributing the structure to Bogardus. Because building permits did not exist in Manhattan until the spring of 1866, there was no official documentation to support the claim, despite the similar character of other existing Bogardus works.

It was historian David Kahn who noticed a foundry mark on the cast iron steps where the thick layers of paint had started to chip away. The foundry mark read “James Bogardus Originator & Patentee of Iron Buildings Pat’ May 7, 1850.”   No. 75 Murray Street was one of only a handful of surviving Bogardus structures.

The Apriles owned a treasure.

The approximately $600,000 restoration began in November of 1993, resulting in the cream-colored façade gleaming once again. The street level amazingly retains its original 19th Century storefront, including the Badger roll-down shutters – still in working condition. 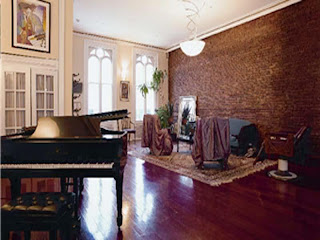 photo sothebyshomes.com
Each of the first four floors was renovated into full-floor loft spaces for events, a “ballroom” and temporary exhibition space. The top-most floor became a residential penthouse with private roof deck. 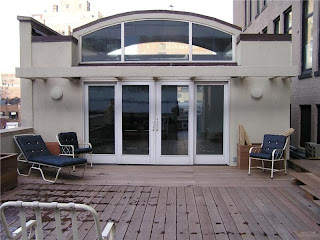