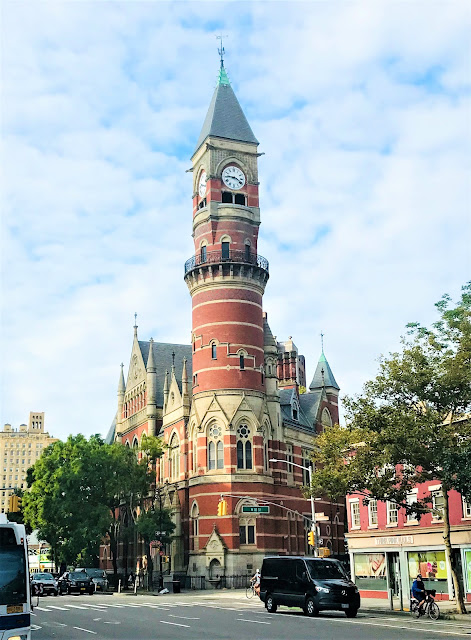 photograph by the author
In 1877 construction of the Jefferson Market Courthouse--so named because it shared trapezoidal parcel bounded by Sixth and Greenwich Avenues, and Christopher and West 10th Streets with the Jefferson Market complex--was completed.  Designed by the firm of Vaux & Withers, composed of Frederick Withers and Calvert Vaux (of Central Park fame), the courthouse was the product of one of Boss Tweed's graft schemes.  The New York Times, a consistent adversary of Tweed, grumbled that an equally suitable building could have been built for half the price -variously reported from $360,000 to $550,000.  Referring to the seedy area in which it was located, The New York Times called it "a jewel in a swine's snout."
The completed project was actually a combination of buildings:  the courthouse to the north, a jail complex to the south and the Jefferson Market buildings to the west.  The site had been, since 1833, a group of sheds serving the market and a tall wooden fire lookout and bell.  The lookout was incorporated into the clock tower and the resulting assemblage was pronounced one of the ten most beautiful buildings in America by a poll of architects in 1885.

A riot of Victorian Gothic design, the courthouse is a medley of materials and shapes.  Red brick, ochre colored Ohio stone, cast iron, colored stone, and stained glass work together in creating the arches, pinnacles and gables.  The clock tower begins out as an octagon, morphs to a cylinder, and then a square.  It is a feast for the eyes.

The facade is abundantly decorated with sculpture, from the huge stone New York Seal within the central, Sixth Avenue gable, to small, unexpected owl heads.  Gruesome gargoyles loom from the clock tower.  One medallion is of a resting man, reflecting on nature and looking very much like John Ruskin.  Another depicts a stork eating a frog. 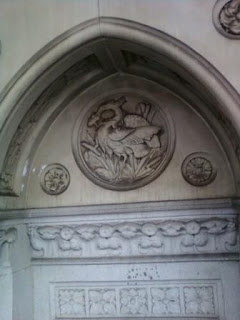 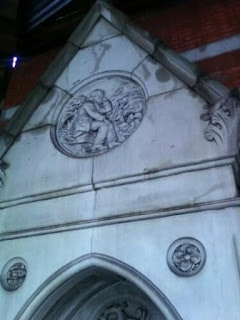 In 1896, author Stephen Crane testified here in defense of a prostitute--Crane said he had seen the girl in the Tenderloin District while he was there "studying human nature."  It was here in 1906 that Harry Thaw was tried for the murder of Stanford White, who was having an affair with Thaw's wife, showgirl Evelyn Nesbit.
By 1927, the jail and courthouse were used only for trials of women, becoming locally known as "the lady's courthouse."  It was here, on February 9, 1927 that Mae West and her entire cast of the Broadway play Sex were tried and jailed on obscenity charges.
In 1929 the market buildings and the jail were razed and the Women's House of Detention, a hulking Art Deco behemoth rose, nearly dwarfing the courthouse.

Because of redistricting, the courthouse ceased operation in 1945, afterward used for various uses by the police department and other agencies.  But by 1958 it was abandoned.  Home to rats and pigeons, it was slated for demolition by the city in favor of an apartment building.

Fate stepped in when Margot Gayle, Democratic District  Leader, attended a Christmas time cocktail party at 51 Fifth Avenue in 1959.  Conversation turned to the courthouse and it was agreed that it should be saved.

At the time, there were no landmarks laws, no preservation movements, and recycling vintage buildings for new purposes was essentially unheard of.  Saving the courthouse would be a monumental undertaking.  The group started with the clock.  According to Ms. Gayle, "it had been stuck at 3:20 for several years."  A telegram was sent to Mayor Robert F. Wagner saying "What we want for Christmas is to get the clock started."

Wagner jumped on the cause and, eventually, other politicians, celebrities and literary figures joined in.  The clock was restored.  A new use was now needed for the building.  Although the New York Public Library was initially not receptive to the idea of having a branch in an old court building, the mayor swayed the directors by threatening to withhold capital funding.

By 1967 the renovation, designed by Giorgio Cavaglieri, was complete.  It was the first real example of historic preservation in the city.  In 1974 the Women's Detention Center was demolished and replaced by a beautiful community garden that perfectly compliments the renewed building. 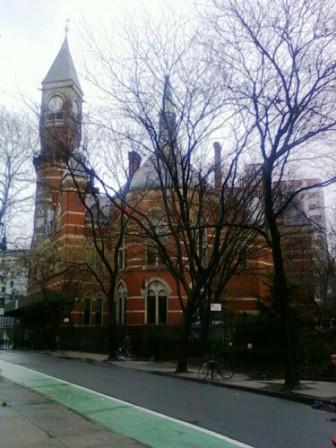 non-credited photographs by the author
LaptrinhX.com has no authorization to reuse the content of this blog
Posted by Tom Miller at 7:45 AM