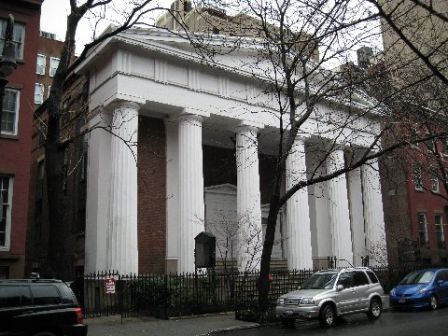 West 13th Street, between 6th and 7th Avenues is lined with large mature trees and gentile residences from the mid-19th Century.  And holding court over it all is the stately 1846 Village Presbyterian Church.
One would be hard-pressed to find a better, purer example of period Greek Revival architecture in the city.  Wide stairs lead from the heavy, cast iron fence to imposing painted wood portico with its great, ionic fluted columns.  Three wooden doorways with Greek Revival surrounds are centered within the warm brick facade.
Originally called the 13th Street Presbyterian Church, the building was nearly destroyed twice by fire -- once in 1855 and again in 1902.  Two merges with other local Presbyterian churchs and two accompanying name changes resulted in The Village Presbyterian Church.

The church became responsible for a footnote in America's history when, during the 1884 presidential election between James Blaine and Grover Cleveland, Blaine attended a meeting of New York preachers here.  The Rev. Dr. Samuel Burchard extolled, "We are Republicans, and don't propose to leave our party and identify ourselves with the party whose antecedents have been rum, Romanism, and rebellion."

A Democratic mole in the audience grabbed onto the anti-Catholic comment and made certain it was extentively publicized.  Catholic opinion rapidly turned against Blaine which cost him New York State.  And because of that he narrowly lost the presidency. 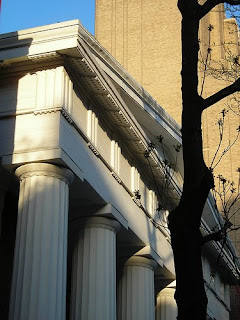 A important structure architecturally as well as an integral part of the historic character of the block, the church was threatened when, in 1975 membership declined to the point that the church disbanded.  Purchased by a developer, the building was slated for redevelopment into luxury condominiums.  Despite a public outcry and pleas to The Landmarks Preservation Commission, the plans for redevelopment were approved.
Luckily, while the interiors are lost forever, the facade was carefully preserved.  Entrances to the residences were installed covertly into the side walls, undetectable from the street.  Even the old church message board remains out front. 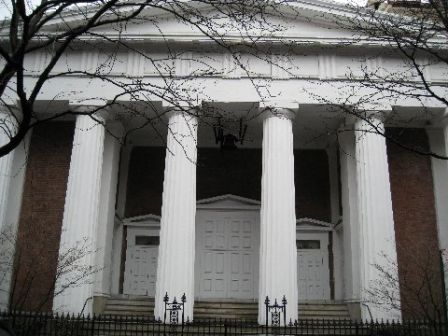 A superb example of Greek Revival architecture, The Village Presbyterian Church is a visual delight and an elegant survivor of pre-Civil War New York.
non-credited photographs taken by the author
Posted by Tom Miller at 6:41 AM