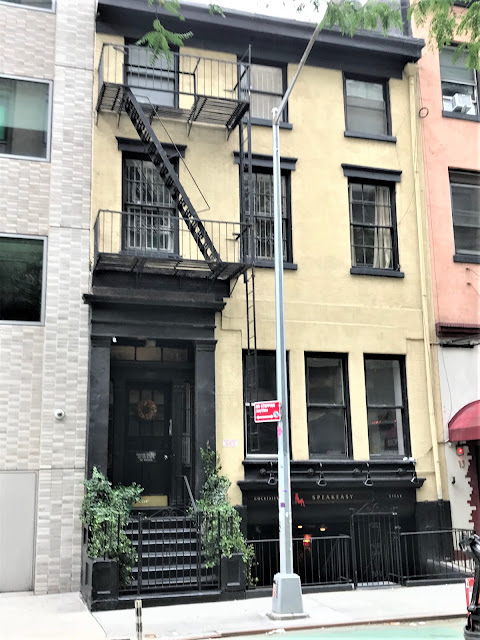 By the early 1850's Emanuel Velleman had moved his family into the comfortable brick house at 11 East 12th Street.  It sat within a fashionable neighborhood, just half a block from Fifth Avenue and two blocks south of the elegant Union Square.  Velleman could afford the high-end residence.  A a dealer in whalebone--so important in the making of corsets--his business was located at 225 William Street.

The Vellemans' Greek Revival style home was 25-feet wide and two-and-a-half stories tall.  Its stoop rose to a handsome (if not unusual) entrance, flanked by heavy stone pilasters that upheld a substantial entablature.  The door was framed by paneled Corinthian pilasters and sidelights, and a three-paned transom allowed additional light into the entry hall. 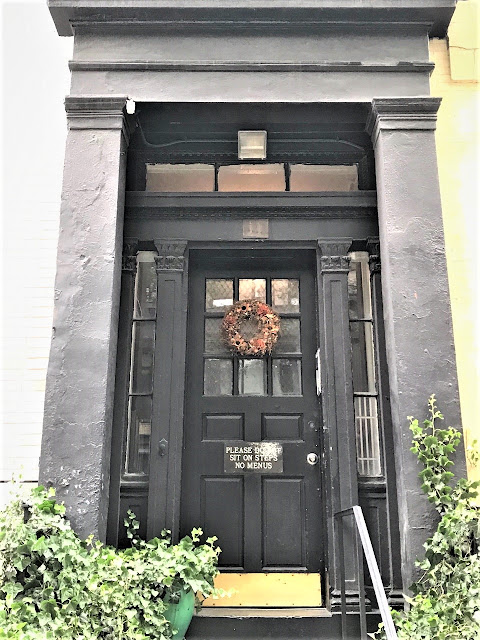 Despite decades of abuse, the attractive entranceway survives well intact.
Around 1857 newlyweds Washington and Eliza Murray moved into 11 East 12th Street.   Washington Murray was born on July 7, 1828, the son of James B. and Maria Bronson Murray.  The 28-year-old had married Eliza B. W. Dana on April 23, 1856.
Murray had studied at Harvard Law School and had been admitted to the bar the year before his wedding.  He was now practicing at 156 Broadway.  His comfortable financial status was evidenced in his membership in the New-York Historical Society, which was, on the whole, composed of well-heeled gentlemen.
The couple maintained a sizable domestic staff.  In September 1859 Eliza Murray was looking for three servants at once.  Her advertisement read:

Wanted--Three servants; one as first class waitress, one as chambermaid and laundress, and one as professed cook.

In 1864, the year that Murray was appointed a commissioner of the City Board of Education, the couple briefly took in a boarder.  Edward Delano was a recently-retired partner in the shipping firm of Spooner & Gilman.  His retirement did not slow him down.  He was actively involved in establishing a reading room and library for the Union soldiers quarters at the Park Barracks.  The New York Times noted that contributions should be send to "Edward Delano, Treasurer, No. 11 East Twelfth street."
Washington Murray, too, involved himself in civic projects.  In April 1865, only one week after President Abraham Lincoln's assassination, he sat on the Finance Committee formed to raise money to erect a statue to him in Union Square.  And by 1868 he was a trustee of the Columbia College School of Medicine.
On September 19, 1867 Washington Murray died at just 39 years of age.  Eliza remained in 11 East 12th Street, again taking in a single boarder, possibly more for personal security than for money.  In 1868 Mathias Hare listed his address here, and in the early 1870's William F. Smith boarded in the house.  His profession was listed only as "president" of an unnamed firm on Library Street.
It seems Eliza moved elsewhere in 1877.  The house was leased in August that year.  The ad read:

It was initially leased to John Bigelow, who stayed only one year, and then to Clara B. Warner, an "editress."  It was, perhaps, a surprising profession for a female, although she may have worked on a women's magazine or similar publication.  Clara stayed for several years, and when the house was sold in 1886 she took a position teaching English at the Genesco Normal School upstate, today the State University of New York College at Genesco.
Artist Julian Alden Weir and his wife, the former Anna Baker, purchased the Murray house in September 1886 for $27,500--in the neighborhood of $750,000 today.  Born in 1852, Weir was already making his mark in the art world.  He had trained at the National Academy of Design in New York and the Ecole des Beaux-Arts in Paris.
The East 12th Street house was just six blocks north of Weir's studio in The Benedick on Washington Square.  The couple's country home, Weir Farm, in Wilton, Connecticut had been in Anna's family. 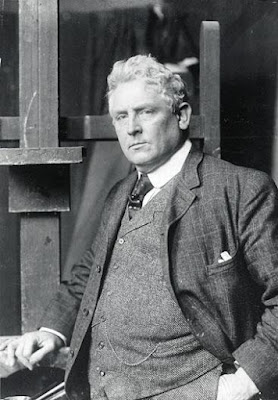 from the collection of the Smithsonian American Art Museum
Anna Weir died in 1892.  Rather shockingly Weir married her sister, Ella Baker, before the end of the year.  Through this marriage the artist gained another farm in Windham.
The following year was a significant one for the J. Alden Weir.  The American Art Association staged an exhibition comparing his and John Henry Twachtman's works with those of Claude Monet and Paul Besnard.  The distinguished showing confirmed that Weir's style of American Impressionism had been noticed by the art world.
Prior to leaving the city for the summer months, socialites sometimes tried to help valued staff find employment.  On May 27, 1897 Ella placed an advertisement that read:

Nurse Girl or Lady's Maid--A lady desires to find a situation for a French girl; competent to take care of an infant, or young child, or as lady's maid.

In 1910 architect H. Horenburger updated the house with new windows and stairs.  Weir then leased the house to David Gottesfelt for a period of ten years, starting at $1,800 per year.
Julian Alden Weir died on December 8, 1919.  His paintings hang in esteemed institutions like the Metropolitan Museum of Art, the Smithsonian American Art Museum, and the Phillips Collection in Washington D.C.  He had two daughters, Cora and Caroline (Caroline became an accomplished artist herself).  Caroline sold the house to Samuel Kilpatrick two years after her father's death.
The parlor floor and basement levels were converted for business by 1925 when Charles Meyer's drug store was in the lower section.  By 1931 E. R. Siering operated the Dr. Cheeseman Medicine Co. here.  That year he advertised Dr. Cheeseman's Pills in American Farming, touting among other things, that they provided "Ladies positive relief for delayed or overdue [menstrual] periods," and that "Millions of women throughout the world have used our famous pills for their wonderful health giving powers."
Sierling was charged by the Federal Trade Commission in 1933 with fraudulent advertising.  In its complaint, the Commission said in part that "in truth and in fact" the pills were not harmless, did not possess health-giving powers, and were not guaranteed under the Pure Food and Drugs Act, as the advertisements claimed. 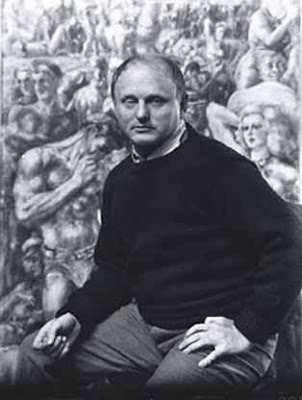 Reginald Marsh, from the collection of the Smithsonian American Art Museum
At the time artist Reginald Marsh was living in the upper floors.  Born in Paris to artist parents, he had arrived in New York City in the early 1920's.  His subject matters were the common members of society in locations like Coney Island and the Bowery. 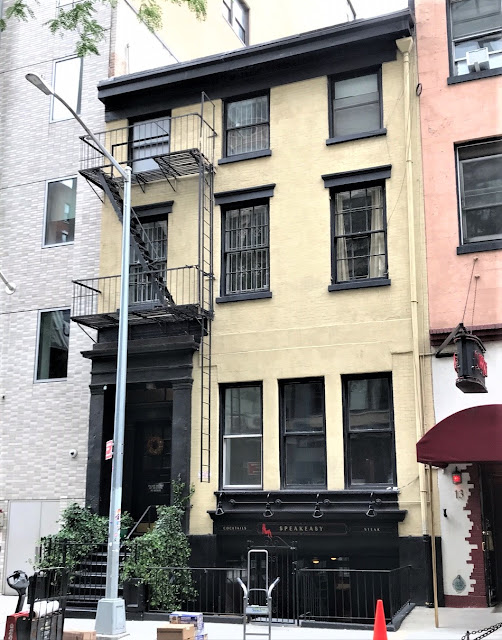 Around 1959 the basement level became the Orientalia Bookshop, which would remain through the 1960's.  A renovation to the building in 1992 resulted four apartments above the basement level store.   It was home to Twelfth Street Books before the bar-restaurant Speakeasy moved in more recently.
photographs by the author
LaptrinhX.com has no authorization to reuse the content of this blog
Posted by Tom Miller at 1:08 AM