Thomas Merritt was a "carman."  The term referred to deliverymen, most often employed by stores or express firms.  And so he was the 19th century counterpart to today's U.P.S. or FedEx driver.  As early as 1849 Merritt and his family lived in the 26-foot wide house at No. 177 West 18th Street (later renumbered 255).  The three-story vernacular style building was faced in brownstone and, most likely, a store always occupied the ground floor.  In the rear, accessed by a narrow horsewalk, or walkway, was a smaller house for rental purposes.

There were two boarders in the house in 1849--Charles B. Warren and Francis J. Doremus, both masons.  They were gone by 1852 when Lewis Rigler and John S. Davis rented rooms here.  Rigler was a butcher who ran a stall in the Washington Market, and Davis listed his occupation as an "inspector."
In 1856 the ground floor store housed a dairy store.  An advertisement appeared in The New York Sun in 1858 offering "For Sale--A Good Private milk round with horse, wagon, harness and cans.  Apply at 177 West 18th st."  A "milk round" referred to the route of established subscribers to whom the wagon would make deliveries of fresh milk.
The business was purchased by John H. Carr, the son of constable Benjamin J. Carr and his wife, Hester.  The family had lived just a few houses away at No. 163 West 18th Street, but in 1858 moved into No. 177 with a boarder, confectioner Charles Ayrey.  Two other tenants that year, presumably in the rear house, were William Garrett, a butcher, and carpenter Edward Sullivan.
Benjamin Carr had been appointed a constable in 1854 and was a city collector as well--responsible for collecting past taxes, for instance.  Ayrey remained with the family through 1861, at which time he had changed his profession from making candy to making shoes.

Garrett R. Ackerman, another carman, lived with the family for several years; and then Isabella Gillespie, a widow who sold toys, rented a room in 1861 and '62.  She was replaced the following year by Margaret Wilson, who made candies.

Benjamin J. Carr died in 1861, but Hester and her son remained in the 18th Street house until 1864 when she moved uptown to No. 60 West 32nd Street.  No. 255 continued to see a succession of blue-collar boarders and widows.  In 1868, for instance, the residents included Andrew Armstrong (who would remain for several years), a "laborer;" widow Mary Mack who took in washing; cabinetmaker Jacob Matz; and Susan Roe, widow of Edward Roe.

In 1879 John Herman ran the store, but police were unhappy with one of the items he sold there.  On February 21 The Evening Telegram reported that he had been arraigned in the Jefferson Market Police Court "charged with violation of the Lottery law in selling policy slips purporting to represent part of a drawing or lottery unauthorized by the laws of the State."

The rear house was occupied by James Cullen and his wife in the 1890's.  Mrs. Cullen did housework, advertising on May 21, 1890 in the New York Herald "A respectable woman to work by the day; terms moderate."

The name of James Cullen, too, would appear in newspapers, but for a less respectable reason.  On Saturday night, January 12, 1895, plainclothes officers Rohrig, McConville and Gregg were patrolling the neighborhood when they overheard two men on West 18th Street talking about playing poker.  They followed them to No. 255 West 18th Street, where they went down the pathway to the rear.

The New York Press reported "The officers followed and found themselves in a little, narrow alleyway leading to the back door, which was so narrow that they had to file in one at a time."  Officer Gregg rapped on the door while the other cops stood back.  The door was opened a crack and someone said "What do you want here?  This is a private house."

The officers did not answer, but rushed in, "carrying the doorkeeper with them."  There were fully a dozen men, ranging from 18 to 25-years of age, including Cullen, "seated around a table playing poker."  The Sun reported "There were five card tables, several packs of cards, and 420 poker chips" and The Press said the men, "arose thunderstruck, to be taken in charge by the three policemen."

The group maintained that they were playing for fun, despite long, "diligent" questioning.  But one of them, John Beattie, caved when promised he would be discharged if he would testify against Cullen.  The Press reported "He said that they were playing for money, and told how much the different chips represented."  The other men were released after being fined $5 each--about $157 today.

At the time George H. Tabor ran his paint store in the ground floor shop.  He was called for jury duty on May 20, 1896 regarding a highly visible trial.  Alice Almont Livingston Fleming was the only child of millionaire Robert Swift Livingston and Evelina Matilda Livingston.  When Livingston died, his will left most of his estate to Evelina.  At Evelina's death the remainder would go to Alice.  Evelina later remarried and on August 30, 1895, she died from poisoning.  Alice was indicted for her mother's murder.

George H. Tabor had no intention of sitting on the jury.  When his questioning began, he "said he was a little hard of hearing," according to The Brooklyn Daily Eagle.  The lawyer lowered his voice and continued the questions, deciding that "the objection of deafness did not weight very heavily."  So Tabor changed his strategy.  He told Recorder Goff he had formed a "passing thought" on the case.  The lawyers discussed the issue, and then decided Tabor could be impartial.  But just as he was about to be sworn in (and after having been grilled for an hour and thirty minutes) the defense lawyer changed his mind and Tabor was happily dismissed.

The Young family had moved into the rear house by this time.  Like her predecessor, Mrs. Young did domestic work.  She placed an advertisement in the New York Herald that year that read "Respectable woman to do washing or house-cleaning,"  Similar ads continued for several, always ending "Mrs. Young, rear house."

No. 255 was owned by James M. Moore in 1905, when he made significant improvements by introducing indoor plumbing.  The modernization came with a "water-closet" which would have done away with the necessity of a backyard privy.   The significant updates cost Moore then equivalent of $15,000 in today's money.

George H. Tabor continued to operate his store here until about 1915.  In 1911 he got home to find he had dropped his eyeglasses somewhere along the route.  His ad on July 1 read "Lost--pair of spectacles, in case, between 255 West 18th and 442 Manhattan Av."  He promised that if the finder would return them to the 18th Street store, he "will be suitably rewarded."

The building was officially converted to apartments in 1942--one each on the second and third floors.  It was most likely at this time that a veneer of beige brick was applied to the brownstone front and the cornice replaced by a parapet.  A new storefront was installed, as well, accommodating two shops.

Irving Lazaroff was one of the tenants in the mid-1960's.  He was associated with a camp in the Catskill Mountains called the "Irene--Kenmar County House."  The facility was especially aimed aimed at mentally challenged children.  The Review-Times explained on June 19, 1965 that it was "a place where middle income families and their retarded may enjoy an inexpensive family vacation."

Before 2000 one of the stores became home to Ellen Christine Colon-Lugo's boutique.  She was described by Claudia Varin in her A Guide to New York's Fetish Underground that year as "a hatmaker and dressmaker with a vision.  She specializes in real antique and newly made antique fashions, and has taken hatmaking and dressmaking to a new level by using antique and vintage hat styles for inspiration."

The store was visited by The New York Times journalist Ralph Blumenthal in March 2009.  The designer explained her approach to hats (her career began in 1995) and bemoaned the fact that hats, overall, had fallen from fashion.  When asked what caused that, she replied "Hairdos changed," as far as women went, "And then you had Vatican II.  The ecumenical council decreed woman no longer had to wear hats in church."

And for men?  "People like to blame it on J.F.K.  He loved his lush hair, plus he was always getting dressed so fast from all his affairs he didn't have time for a hat." 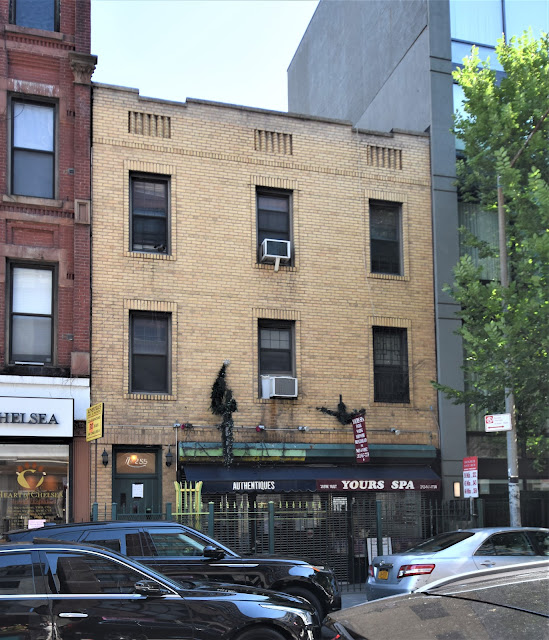 The building is little changed since its 1942 makeover.  No one passing by could suspect that beneath the brick is a brownstone house more than 170-years old.

photographs by the author
Posted by Tom Miller at 1:09 AM