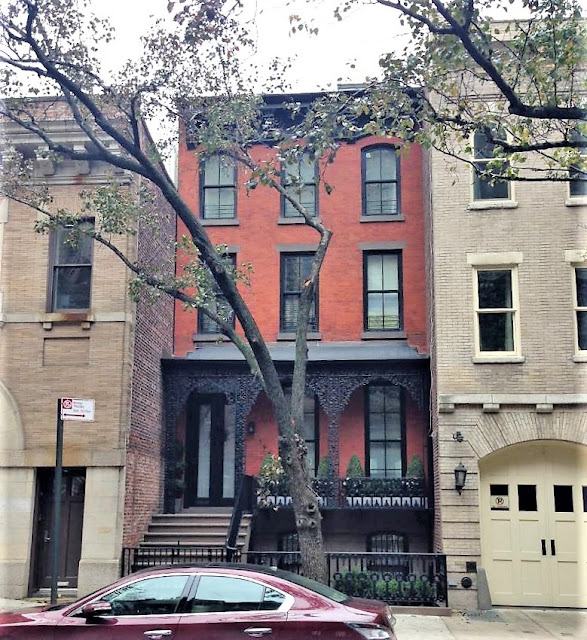 Before long a row of brick-faced Italianate-style homes was completed on East 73rd Street, between Lexington and Third Avenues.  At 20-feet wide they were intended for financially-comfortable, albeit not wealthy, families.  Three stories tall above an English basement, the houses could claim no outstanding architectural elements--other than their striking cast iron verandas at the parlor level.  A noticeable scar on the facade of No. 175 (one of the last two survivors of the row) suggests that the entire group had the charming detail.

Two houses away, No. 171 became home to Edwin L. Hodgson, who was listed under the catch-all description "merchant."  The relocation to the still mostly undeveloped district must have seemed to the family as if they were moving to the country.  They previously lived on Oliver Street in the crowded, noisy Lower East Side.

The Hodgsons remained in the house until the summer of 1885.  Edwin sold it that year to Jonathan and Caroline Southward.   The couple had a son, also named Jonathan, and like the Hodgson family would stay at No. 171 for decades, finally selling it in June 1911 to millionaire George J. Gould.

As the mansions of Manhattan's wealthiest citizens had crept up Fifth Avenue along Central Park, private carriage houses cropped up along blocks far enough away to not be a smelly nuisance; but close enough for convenience.  At the turn of the century the East 73rd Street block which included No. 171 had essentially become a "stable block."  Prim residences were demolished for the lavish carriage houses of millionaires like Henry Harper Benedict, Charles Hudson, and J. B. Layng.

In reporting the sale, the Real Estate Record & Guide noted "Mr. Gould's garage occupies the adjoining property at Nos. 167 and 169."  The purchase may have originally been intended to provide extra housing for Gould's garage staff.

Gould was travelling in France when he suffered a fatal heart attack in May 1923.  The brick house on East 73rd Street was purchased by well-known and influential architect Electus Darwin Litchfield.

Born in New York City in 1872, Litchfield had worked in several architectural firms, like Carrère & Hastings and Lord & Hewlett.  He and his wife, Elizabeth, had two children, Elizabeth and Burnham.

Unlike many architects who moved into vintage houses, Litchfield did not alter the Victorian facade.  It was a surprising decision, given that in 1920 he had initiated a dramatic re-make of a group of vintage homes in the neighborhood.  On February 20 The Sun reported that he had "purchased twelve old fashioned houses" on 68th Street between Second and Third Avenues, "and will alter them into the modern American basement type."  The newspaper deemed that the project would result in "a new society neighborhood."

The changes which Litchfield did make to No. 171 were a protective brick and iron wall at the property line in 1924, and the division of the interior to what today would be termed two duplexes.  The Litchfield family lived in the lower two floors and leased the upper to upscale tenants.

The Litchfields spent their summers in Stockbridge, Massachusetts; although Electus, like many busy heads of families, seems to have been there mostly on weekends or for short visits.   Yearly announcements in society columns included mentions like that in the New-York Tribune on September 24, 1922.  "Arrivals at Heaton Hall in Stockbridge include Mrs. Electus Darwin Litchfield, Miss Elizabeth and Master Burnham Litchfield."

Litchfield made his mark not only as a designer of public buildings--the National Armory in Washington, the Denver Post Office and Courthouse and the Public Library in St. Paul, Minnesota among them--but of monuments, such as the Lewis and Clark memorial in Astoria, Oregon.  He designed entire communities, as well.  He was responsible for Yorkship Village, and World War I industrial town of 2,000 homes for shipbuilders near Camden, New Jersey; and was the architect of the Red Hook housing project which replaced slums.

As president of the Municipal Art Society in the 1930's he vehemently fought against Park Commissioner John Sheehy's proposal to convert 32 acres of Central Park into athletic fields.  Some of his ideas were surprising.  When John L. Nagle, Chief of Design of the Bureau of National Parks, suggested cleaning up the grounds of Liberty Island in December 1933 by removing "barracks and storehouses" that surrounded the base of the Statue of Liberty, Litchfield bristled.  He cautioned Nagle "these ancient buildings, with their easily distinguishable doors and windows, are extremely valuable," since they provided a comparison of scale to the monument.

And in 1935 he may have surprised parents when, as reported by The New York Times on January 28, he sent a letter to every public school in the city "asking the help of the pupils in keeping the streets and parks clean and in preventing defacement of the city's monuments."  (He was not suggesting that the children do free-lance sanitation work; but that they be aware of littering and vandalism.)

In the meantime, the Litchfields' upstairs tenants were well-to-do.  Stock broker Webster Tilton was here in 1939, followed by socialite Enid Locke Gillett and her daughter, also named Enid.  Mrs. Gillette was the widow of Lowry Gillett.  When Enid, her only child, married Peter Irving, Jr. in St James' Episcopal Church on May 3, 1941, the event made headlines on the society pages.

Electus Darwin Litchfield died on November 27, 1952 at the age of 80.   His obituary in The New York Times summed up his illustrious career, saying he "was a member of many private and city organizations, championed civic-improvement causes including slum-clearance and housing projects.  He was a devotee of municipal beautification."

Elizabeth Litchfield sold the house to Samuel Nirenstein in December 1953.  When he sold it six months later it was described as a "four-story apartment house;" but in fact it still had just the two duplexes that Litchfield had configured.

At around 6:20 on the night of February 13, 1960 three men, ranging from about 20- to 30-years-old, managed to breach the protective wall out front.  Schweitzer was in his parlor floor study when he heard the breaking of glass at the front door.  He was suddenly confronted by the burglars who demanded money while holding their hands in their pockets to suggest they had guns.

Schweitzer turned over all his cash--$181.  In an odd gesture of compassion, when he asked them if he could have $5 back, they agreed.  It would be their only kindly act.

One of the men, who spoke to one another in what Schweitzer thought was Hungarian, asked him "Are you a Jew?"  When the diplomat said he was, the man ordered "Let's hear you say 'Heil Hitler' and give the salute."  The thugs forced him to repeat the humiliating act several times before fleeing.

Schweitzer went upstairs where Dorothy Wilson and two sons, 12- and 13-years-old, lived.  He told her what had happened and she urged him to call the police.  But Schweitzer was so terrorized that he refused to call for help until 7:00, as the intruders had ordered.

At the time Stephen McKenzie DuBrul, Jr. had been married to the former Antonia Paepcke for three years.  Born in 1929, DeBrul had already made a name for himself.  At only 26-years-old he had been named a partner of Lehman Brothers.

The DuBruls were living at No. 171 East 73rd Street--now once again a single family home--when son Nicholas was born in March 1966.   Their second child, Jennifer, would be born six years later.

Stephen's astounding career continued to evolve.  From 1961 to 1965 he served as a part-time consultant to the President's Council on Economic Advisers.  In 1970 he was elected to the board of the Continental Can Co.; and two years later, after having been with Lehman Brothers 16 years, he joined the prestigious brokerage house of Lazard Frère.   Then, while at the White House "on a business matter" in October 1975 Douglas P. Bennett, the White House recruiter, asked him if he would be interested in becoming head of the Export-Import Bank.

In reporting on the appointment two months later, The New York Times mentioned No. 171, getting the construction date slightly wrong. "They own an 1850 red brick house on 73d Street in Manhattan."

The DuBruls stayed on in that red brick house at least through the 1980's.  By the time the house was again placed on the market in 2011 the interiors familiar to the Southwards and Litchfields were gone, replaced by open, modern spaces.  But the brick wall outside still remained, prompting Curbed New York's headline on May 1 that year to comment "Gated UES House Kept the Poor Away Before Madonna Made it Cool."


Unseen from the street, a sizable extension to the rear had transformed what had been built for an upper-middle class family 150 years earlier to a 6,500-square foot residence with six bedrooms, five and a half baths, and a 33-foot living room under a skylight.  The asking price in 2011 was $6.375 million.

Electus D. Litchfield's protective wall has been removed, bringing the house back to its charming 1860 appearance. 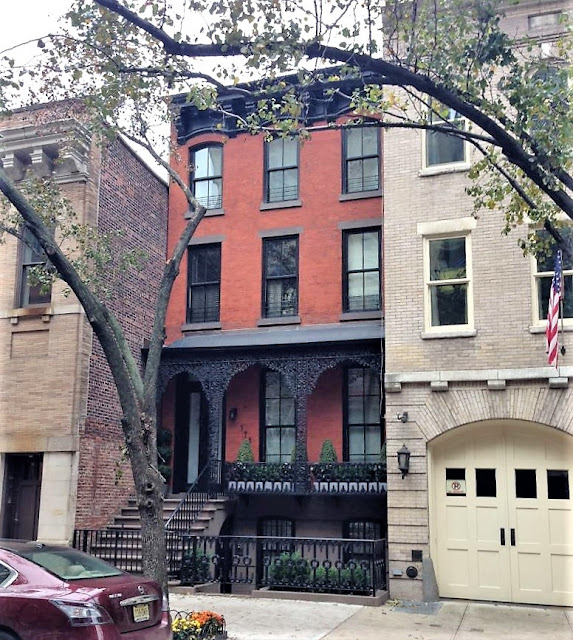