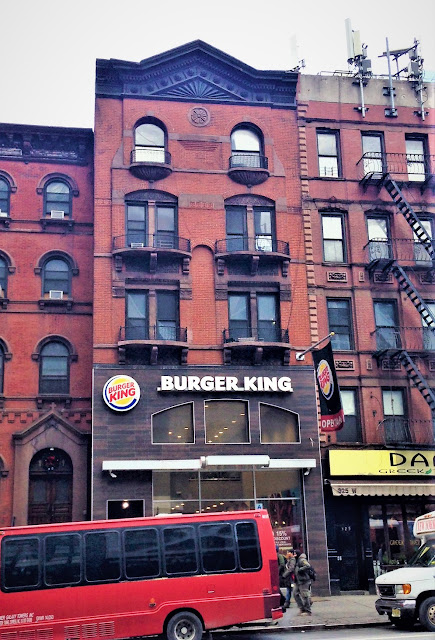 On August 20, 1881 the New-York Tribune reported that four young children had been "rescued from a place called 'Hell's Kitchen'" at No. 551 West 39th Street.  Calling the wooden building a "shanty," the article went on to say "The block in which this place is situated is considered one of the lowest and most dangerous localities in New York; across the street from 'Hell's Kitchen' is 'Battle Row,' and not far distant is 'Sebastopol,' two notorious resorts for criminals.  It is made up of miserable huts and shanties built among the rocks."

While many of the ramshackle wooden buildings were given such monikers by the locals, it was Hell's Kitchen that would lend its name to the entire crime-ridden district from approximately 34th Street to 59th, and Eighth Avenue to the Hudson River.

But even as the Tribune printed its disturbing article, an effort to upgrade the living conditions of the poverty-stricken residents was underway.  Among those involved in the charge was builder and developer Samuel McMillan.  He was the president of the New York Building and Land Appraisement Co., a vice-president in the Mutual Bank, and the owner of his own construction firm, Samuel McMillan & Co.

McMillan not only purchased old structures throughout the district and replaced them with brick tenement buildings--a major step up for the residents--but in 1882 he made a move that no doubt astonished other well-to-do businessmen.  He proved his confidence in the potential of the gritty area by deciding to move his family to Hell's Kitchen.

The block of West 42nd Street between Eighth and Ninth Avenues was marginal at best.  A few blocks to the east were banks and businesses; but here only the brick Holy Cross Church offered visual relief from the squalor.  Peter F. Crouch owned the wooden house and store at No. 327 West 42nd Street in 1882.  But the following year, on November 3, the Real Estate Record & Builders' Guide announced that Samuel McMillan "is about to tear own the frame dwelling at No. 327 West Forty-second street...and to erect on the site a five-story brick and brown stone dwelling and store."  The article added "Mr. McMillan will occupy the new building, both as a residence and for business purposes."

For his architects McMillan chose the firm of Thom & Wilson, who were currently busy producing rows of houses on the Upper East and West Sides.  For McMillan's structure, projected to cost $25,000 (more than $580,000 today), they turned to the highly popular Queen Anne style.  Ignoring the sordid surroundings, they produced a handsome structure that would have comfortably fit into any other Manhattan neighborhood.

Above the two-story commercial front, where McMillan would install his business offices, the building was faced in red brick and trimmed in brownstone and terra cotta tiles.  Each of the windows was provided a balcony--a means of relief on sticky summer nights.  Thom & Wilson crowned it with a triangular pressed metal parapet and cornice containing a geometric sunburst, a common Queen Anne motif.

If McMillan intended the upper portion of the building to be his private residence as the Record & Guide suggested, he changed his mind.  His wife's sister and her husband, Leon E. Baily, appear to have been living in an apartment here when Mrs. Baily died on Friday, August 24, 1888 (newspapers announced that she died "at the residence of her brother-in-law").   Leon E. Baily was a funeral director.  His wife's funeral was held in the apartments on August 27 before proceeding to Holy Cross Church nearly next door.

By the mid-1890s Patrick F. Trainor and his wife were living in an apartment here.  An American success story, he was born in Scotland in 1863 and brought to America as a child.  After his public school education he worked for the American District Telegraph Company, later becoming manager of the Baltimore and Ohio Telegraph Company in Baltimore, then assistant general manager for that company in Washington.

When he returned to New York in 1888 he turned to politics.  He was elected in 1893 to the 17th Assembly District and was repeatedly reelected.  He was well-known in political circles while living in the building.  Later, in 1900, he would be elected State Senator.  He died in Albany on Christmas Day 1902 at just 38 years old.

In the meantime there was trouble at ground level at No. 327.  Samuel McMillan had two partners in Samuel McMillan & Co.--James W. Pacey and William Young.  Pacey also ran Pacey & Whipple from the address, a finish carpentry firm that manufactured interior trim, window frames, sashes and doors.  It may have been that perceived conflict of interest which resulted in what appears to have been a messy parting of the ways.

On July 29, 1899 the Record & Guide reported that not only had Samuel McMillan & Co. been dissolved, but "the 42d street property has been sold by Mr. McMillan."   James Pacey and William Young partnered to form the general contracting firm of Wm. Young Co.  Seemingly ignoring McMillan, the Record & Guide concluded, "Mr. Pacey has a host of friends, and his long experience and successful work are sure to secure him numerous contracts and success."

The apartments were rented to families of modest means in the first years of the 20th century.  At least two of them sought secure city jobs.  In 1907 Peter J. Smith passed the Civil Service test for "office boy," with a grade of 81.2, placing him 188th on the list of eligible applicants.  And William R. McAuley, who was here at least by 1914, had been a Civil Service clerk since January 1, 1898.  He was making the equivalent salary in 1914 of around $50,000 today.

William Melligan lived here in 1910 when he became a hero of sorts.  He was far north at 131st Street and Third Avenue on the afternoon of May 29.  Three men were in a runabout (a light, open buggy) when the driver lost control of the spirited horse.  All three were thrown out, one seriously injured.

Melligan, described by newspapers as "a youth," was apparently as physically fit as the horse.  He chased the rig to 157th Street, where it grazed and nearly overturned another vehicle containing three women.  The New York Times reported "The horse continued to 164th Street and Washington Avenue, where Melligan overtook it and seized the animal by the bridle."

If the young man was winded by the long chase, he did not show it.  "He threw it to the ground and sat upon its head until several policemen arrived."

In 1920 the building was purchased by the Zanesville, Ohio based Mosaic Tile Co.  In reporting the sale, the Record & Guide announced "The structure will be remodeled and made into a permanent sample and show room for the company's exclusive use...The interior will be arranged in a manner to display the company's line of ceramic specialties to the best possible advantage."

Architect John H. Knubel remodeled the storefront with a two-story arch faced in Faience tiles.  Its arcade show windows displayed the firm's ceramic tiles and drew the passerby in.   Mosaic Tile Co. used the ground floor as its showroom, the second floor as its offices, while the top floors were listed as a "tenement."


Mosaic Tile Co. remained in the building for 25 years, selling it in 1945 to the Schliftman Real Estate Corporation.  For decades, at least until 1990, the store would be home to the Eagle Supply Co., dealers in art supplies.

In the meantime, the building's most interesting occupant since Patrick F. Trainor was Edward P. May.  Better known as "Teddy," he had been Manhattan's Superintendent of Sewers and in 1903 he made the first comprehensive Manhattan sewer survey.  One columnist said of him "A small man, Mr. May could get into a small pipe.  He got to know every foot of the sewer network, even of the amazing brick sewers put down before 1850."

Throughout his more than 50 years in the position, he had helped the police repeatedly in retrieving guns and loot stashed in the sewers by gangsters and murderers.   The New York Times purported on April 24, 1960 "Once Mr. May led a squad in clearing the sewers of a number of live alligators that, discarded in the sewers as tiny pets, had survived and grown large."

As the end of the 20th century approached the 42nd Street block had greatly changed.  The Port Authority Bus Terminal had opened directly across the street in 1950; and by the 1990s the neon-fronted restaurants and clubs of Time Square were spilling west.  In 1999 a conversion of the lower floors commenced.  The second floor was ripped out to create a mezzanine for a restaurant.  The tiled storefront installed by Mosaic Tile Co. in 1920 was annihilated. 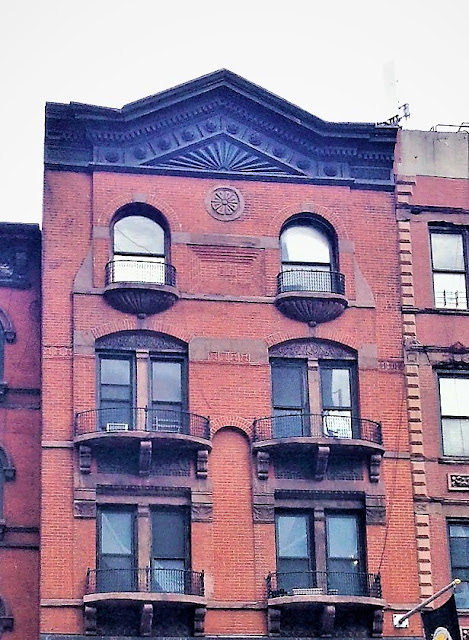 The ground floor space was home to B. B. King's Blues Club before Burger King took it over and added its own questionable storefront in 2015.   A glance above reveals Thom & Wilson's handsome Queen Anne design that must have seemed so out of place in 1883.