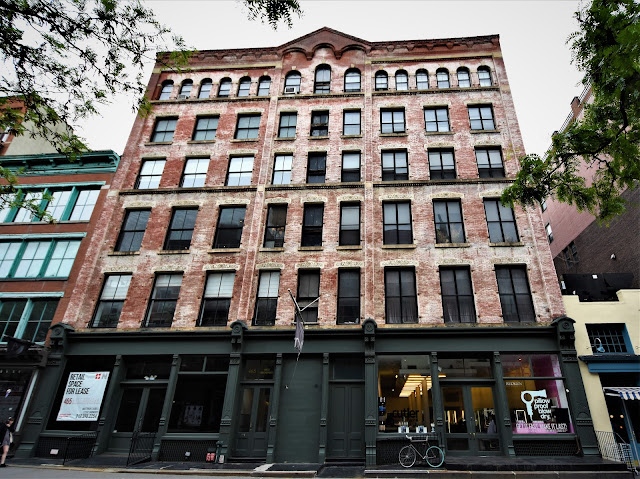 In March 1889 real estate operator Amos R. Eno completed a brick-faced factory building at Nos. 95 through 99 South Fifth Avenue.  Apparently pleased with his architect's design, he set John A. Whitenack to work on a near copy just steps away, at Nos. 87 through 91.

In June 1889 Whitenack filed the plans for a "six-story brick store" with estimated construction costs of $50,000; effectively doubling Eno's original outlay.  Completed the following year, it was a utilitarian blend of Romanesque Revival and neo-Grec styles.   The cast iron base was divided into three sections.  Two retail shops flanked the entrances to the upper floors.

The top five floors were clad in red brick.  Stone lintels were carved with elaborate incised decorations, typical of the neo-Grec style.  Whitenack introduced Romanesque Revival at the top floor in the form of an arcade of arched openings.  Above the central section a triangular pediment sat on a graceful arched corbels.

The building filled with a wide variety of tenants.  Among the first was Abram S. Townsend's hat band factory.  His products could not have been more different from that of another early tenant, the DeLamater Iron Works.

Cornelius H. DeLamater was born in Rhinebeck, New York. The New York Times said in 1889, "in 1821, circumstances compelled Mr. Delamater [sic] to begin earning his own living when 14 years old."  He came to New York City and got a job as an office boy in a hardware store.

The boy's Horatio Alger-worthy story landed him as the head of the iron works and during the Civil War he created the Union's ironclad ships, including the famous USS Monitor.   It prompted H. F. J. Porter to deem the DeLamater Iron Works "The cradle of the modern Navy" in 1919.

While Townsend made hat bands and DeLamater constructed engines and pumps, French-born George Rosseau operated his embroidery factory in the building.  Trouble between him and an employee, Marie Banglin, landed both of them in the newspapers and in jail.

In 1893 Marie arrived in New York from France and answered a want-ad placed by Rousseau.  The Evening World reported a year later that she claimed "It was not long before he began to show her marked attentions."  According to Marie, when she did not respond to his advances, he drugged and "abused her."

Rousseau was arrested and appeared in court on September 10.  His wife met him in the courtroom and kissed him.  The Evening World said "She believes him innocent of the serious charge."  While Rousseau denied the charges and said Marie was acting out of spite because she had been fired, the prosecutor presented seemingly damning accusations.

The Evening World reported that Marie was "in a Jersey City hospital and in a critical condition."  Dr. Fernand D'Orbessam told Justice Potts that she was likely to die.  A priest, Rev. Father Cunniff, testified that Marie had "told him the story of her alleged wrong at the hands of the defendant."

Rousseau's trial began the next morning.  Mrs. Rousseau brought their three children to court and Marie, deemed the day before at death's door, was present as well.  Her case crumbled without hard evidence.

On the stand Marie "admitted she could not prove that Mr. Rousseau assaulted her," said The Evening World.  And when Dr. D'Orbessam was cross-examined, he said there was evidence she had been "roughly handled," but he could not swear she had been assaulted.  Judge Lockwood discharged the prisoner for lack of evidence.  The newspaper wrote "Rousseau cried like a child when he was released."

But the story was not over.  The scorned former employee wanted justice.  Four months later, on February 27, 1895, she laid in wait in the darkness outside of 87-91 South Fifth Avenue.  When Rousseau left the building, she attacked, throwing "a package of pepper in his face."

The stinging seasoning was not enough to keep Rousseau from grabbing and holding Marie until a policeman arrived and arrested her.  She was held on $500 bail--$4,700 in today's dollars.  Once again their stories clashed.  The Evening World reported that she "swore George deserted her for another woman.  George denied it and said she had bothered him with her attentions."


In the meantime another major tenant in the building was J. J. Lattermann Shoe Mfg. Co.   The shoe and boot factory employed more than 200 workers on the upper three floors in 1894 when labor troubles ensued.  Four of those employees were non-union and the others demanded that they be fired.  John J. Lattemann refused, saying that at least one of them had worked for him for three years.  On Tuesday, February 20 about 200 of the workers walked out on strike.

Five days later The New York Times reported that the strikers "are confident that they will win the battle, and have not shown any inclination to surrender.  They have stationed pickets around the doors to watch for non-union workers."  Lattemann, however dug in.  He announced that "the strikers will be taken back only as individuals, and not as union men" and he then commenced hiring new workers.

Three weeks later things were getting heated.  The Evening World reported on March 14 that the strike "has developed very bitter feeling between the firm and the former employees."   Picketing strikers did their best to dissuade the new workers.

Like most factories in the 1890s, teenagers made up a portion of the J. J. Lattermann Shoe Mfg. Co. workforce.  The union attempted to take advantage of that.  The Evening World explained "Among the pickets this morning were a dozen girls, who are said to be more successful than the men at embarrassing the Lattemann Company."

When nothing else worked, the strikers became more aggressive.   As the new employees arrived for work, they were greeted with shouts of "scab" and worse.  Marantha Locke fought back and had striker Frederick Hasten arrested on the morning of March 22.  She charged he "repeatedly insulted the women who were filling places in Latteman's" and made himself "obnoxious."   That morning she had had enough she he called her "indecent names."  He was fined $3 and warned to keep away.

With neither side blinking for six weeks, fire broke out on the fifth floor of the J. J. Lattemann factory around 2:00 on the morning of April 2, 1894.   Suspicions, understandably, pointed to arson, but it could not be proved.  The fire did $1,000 in damages to the building and an equal amount to the Lattemann stock.  The "fancy metal" factory and showroom of Alfred Koehn below were slightly damaged by water.

The strikers who had been so confident in February finally conceded defeat.  The shoe and boot factory continued on without union labor, at least until around 1897.

The enterprising J. G. Timolat operated his two seemingly disparate businesses in the building at the time.  The J. G. Timolat Mfg. Co, made drills under the Moffet brand, and the Oakland Chemical Co. manufactured just one item, the Oakland Hydrogen Dioxide.   An advertisement in December 1895 described it as "A specific in all cases where a non-irritating antiseptic is indicated; in Diphtheria, Ulcerative processes, Nose and Throat affections, Burns, Leucorrhoea, &c., &c., &c."


In 1897, acting on the strong suggestions of businessmen, South Fifth Avenue was renamed West Broadway.  Before then the thoroughfare changed names three times along its route, causing confusion to clients.  The building now became Nos. 465-469 West Broadway.

Alfred Koehn was still in the building at the turn of the century, casting architectural ironwork.  In  March 1900 the New-York Tribune said he "manufactures gas and electric light fixtures of iron, as well as fireplace goods, railings, iron and glass vestibule doors and any and all sorts of special iron work calling for particular skill and exactness in their workmanship and fittings."

Nearly three decades earlier, in 1876, Dr. Augustin Thompson had created an elixir in Lowell, Massachusetts.  He called his mixture of gentian (a flowering plant from the Pyrenees mountains), sugar, sassafras, caramel and other flavorings Moxie Nerve Food.  Like the Oakland Chemical Co.'s hydrogen dioxide, it claimed to be a near panacea.  According to Thompson, it would cure nervous exhaustion, paralysis, impotence, imbecility, "softening of the brain," insanity and other afflictions, as well as build strength, stimulate the appetite and boost energy.


By 1904 he had moved his plant into the West Broadway Building.  Thompson's brilliant marketing strategy put the name Moxie constantly in front of the public.  It was emblazoned on glassware, trays, delivery wagons and even leaded glass lamp shades.  The word "moxie" entered the American lexicon as a synonym for spunk or bravery and lasted through most of the 20th century.

The broad mix of tenants continued in the post World War I years.  In 1919 the Colonial Art Works was in the building.  Its name belied its actual product.  In April that year the firm advertised for "Girls to pack and examine hair nets."

Also in the building was Joseph Petrocelli & Co. Inc.  Operated by Joseph, Louis and Mary Petrocelli, they sold macaroni and olive oil and leased one of the stores as well as space upstairs.

As mid-century approached, the changing neighborhood was reflected in the occupants at Nos. 465-469.  In 1947 Silverton Record Co. was here, selling and manufacturing vinyl records.  And by 1950 the Silver Record Pressing Co. shared the building.

But true change came in October 1969 when Ivan C. Karp opened the OK Harris Gallery in what New York Magazine called "two huge ground-floor galleries."  The article said he "added considerable prestige to downtown," in his opening, and added "The art world has long considered that Karp has one of the best eyes in the business, and he now has the space to show some of the young artists he discovered."

The OK Harris gallery would help launch the careers of artists like Roy Lichtenstein, Andy Warhol, John Chamberlain and Robert Rauchsenberg.   It not only exhibited paintings, but photography, site-specific installations and other art mediums.

The building drew other art galleries.  The Star Gallery opened in 1974 and the Ergane Gallery in 1992.  By now the once-industrial block was reborn as the artsy Soho era took over.  In 1996 the northern store became home to The L-S Collection, a trendy shop offering items like the art glass Tom Collins glasses made in Murano, Italy that sold for $30 each.

Calling Karp's OK Harris a "cornerstone for the contemporary art world," the Smithsonian Institution's Archives of American Art acquired the gallery's complete archives, dating from 1960 to 2014, in 2015.   They were transferred to Washington D.C. and made available to researchers.

According to Alanna Martinez, writing in the Observer on June 15, 2015, the collection included "personal correspondences, artist and exhibition files, printed materials such as announcements, posters, and photographs, prints by gallery artists, slides and negatives, and 39 journals by Karp that he completed over 62 years." 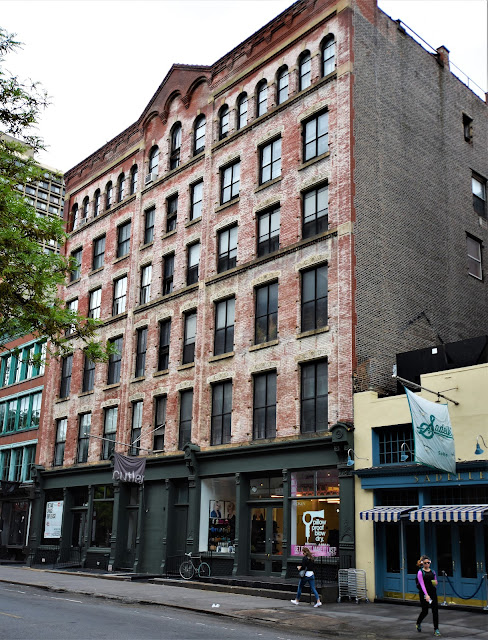 Through its long history the storefronts and even the original doors miraculously escaped modernization.  The peeling paint of the upper facade gives the handsome building a deservedly venerable feeling.

photographs by the author
Posted by Tom Miller at 3:48 AM