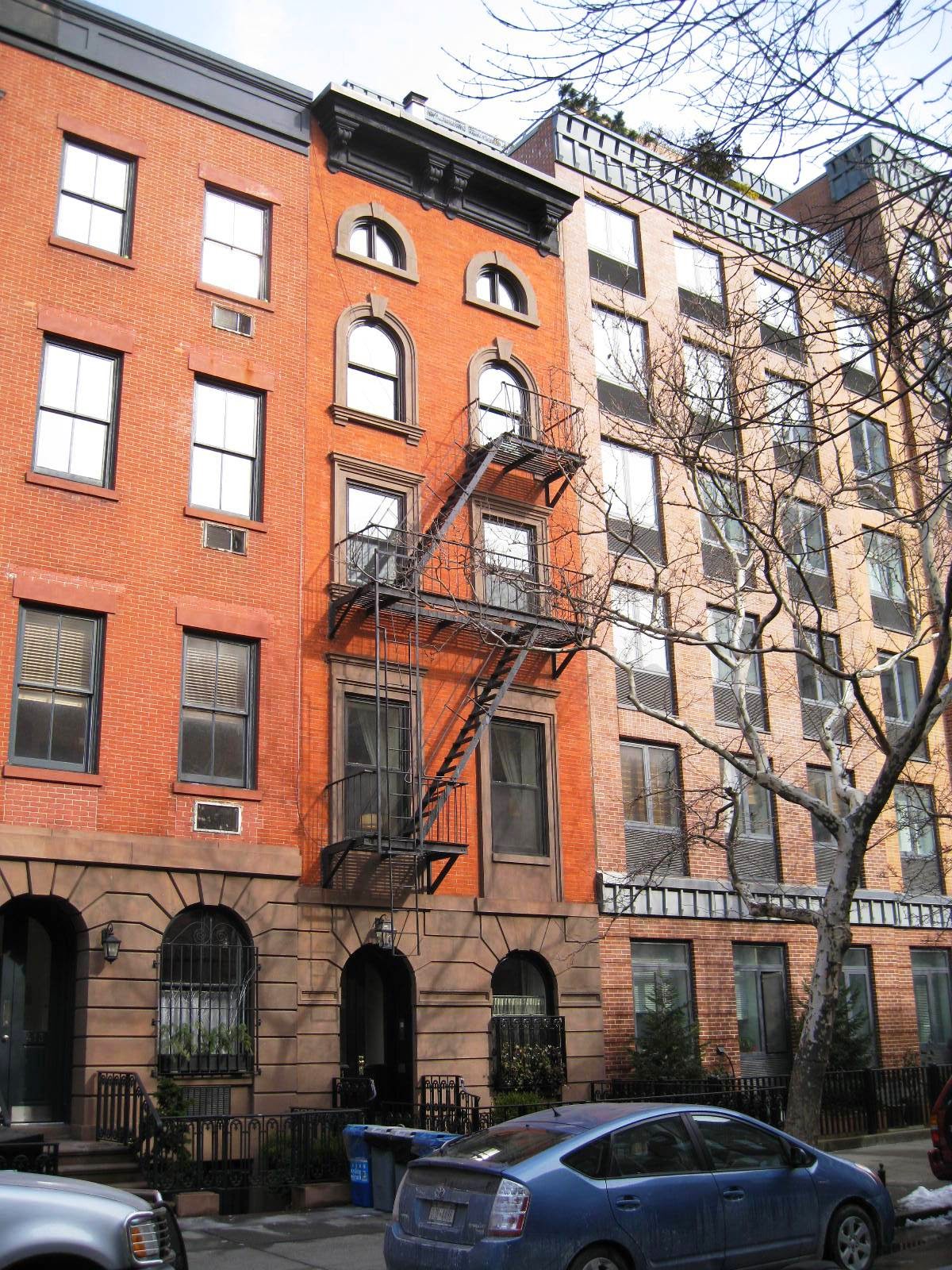 In 1841 a 16-year old boy arrived in New York City from Ireland with no money and no acquaintances.  He had sneaked aboard the ship Ironsides bringing with him little more than vast ambition and ironclad determination.  John H. McCunn had no intentions of surviving on the street as a newspaper boy or bootblack—he would be a lawyer.

McCunn managed to impress attorney Charles O’Connor, who gave him a job as office messenger.  The New York Times later recalled “Having picked up a slight knowledge of law in Mr. O’Connor’s office he was admitted to practice at the New-York Bar at the age of twenty-one.”

The young, driven Irishman’s practice was successful; enough so that by 1855 he was investing his money in real estate in the rapidly developing Chelsea neighborhood.  That year he built a handsome Anglo-Italianate house at No. 411 West 22nd Street.  At only 16.8 feet wide, the house was in some ways less impressive that other, grander homes on the block.  But with its the up-to-date style and fashionable architectural appointments, No. 411 held its own.

The house sat back from the property line, its small yard protected by an attractive cast iron fence.  A rusticated brownstone base with two arched openings upheld the four floors of red brick.  The windows of each floor were treated differently, yet all were framed in carved brownstone that contrasted pleasantly with the rich red brick.  A robust bracketed cornice completed the design. 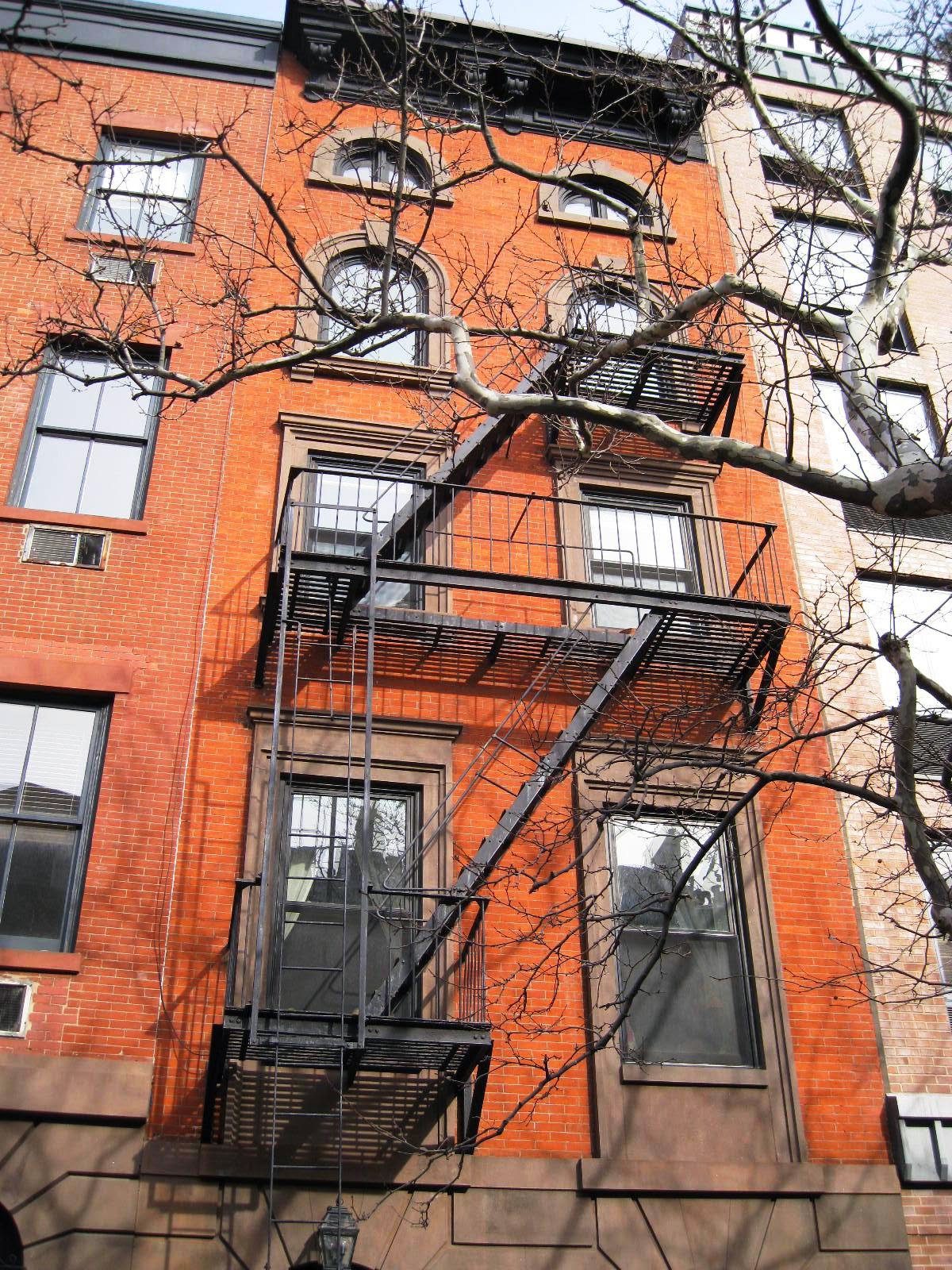 McCunn held on to the completed property, renting it to merchant-class families.  In 1866 the family of George Francis Merchant lived here.  That summer, on August 21 at 5:00, the funeral of George Augustus Brown was held in the parlor.  The 54-year old had died of sun stroke while in New Orleans two weeks earlier.  Whether the Brown family had replaced the Merchants as residents; or whether the funeral was held here as a gesture of friendship is unclear.

By now the good luck of John H. McCunn was running out.  In 1860 he has been elected City Judge under the Tammany Hall administration.  He left New York to fight in the Civil War and was honored for his bravery at the Battle of Malvern Hills.  But he was later ordered court-martialed for his treatment of a subordinate.  He avoided trial by resigning; however General McClellan issued an order that John McCunn could never again be admitted into the United States Army.
He returned to New York and his house at No. 208 West 21st Street.  He would be further disgraced when the exposure of the Tweed Ring drew him into the scandal.  In April 1872 the Judge was forcibly removed from the bench and charged with eight counts of malfeasance and corruption.  On April 21 The Times ran a full-page explanation of the charges under a sub-headline that read “Mal and Corrupt Conduct in Office—Illegal Seizures and Receiverships—Arbitrary Arrests—Startling Array of Alleged Facts.”

It was all too much for the 59-year old McCunn.  Faced with a trial that he told his family “he would not live through,” he paced his room mumbling to himself on the night of July 5, 1872.  He finally “dropped into a gentle slumber,” according to The New York Times and died in his sleep.  The newspaper later said “he died suddenly, under circumstances which indicated that he had committed suicide.”

Among the young attorneys in McCunn’s office of McCunn & Moncrief was Christopher Fine who lived just down the block from McCunn at No. 230 West 21st Street.  The Times described him as “a typical advocate, relying for success largely upon a fervid style of oratory, which was very effective with juries.”

Fine took the opportunity of the senior member’s death to garner a fortune.  McCunn had drawn his own will and Christopher Fine offered to represent the heirs in contesting it.  “It is a singular fact that the death of the senior member of the firm with which Mr. Fine began his legal studies afford the opportunity for his most famous victory in the courts,” The Times later recalled.

Among the properties contested was No. 411 West 22nd Street where, at the time E. L. Lawrence was living.  After a ten-year battle Christopher Fine won the case when the courts eventually declared the will invalid.  His fee for breaking the will was $200,000—nearly $4.5 million today.  He also walked away with the title to No. 411 West 22nd Street.

The house became home to Charles Van Tine and his family.  Van Tine was the son of the wealthy and influential Theodorus Van Tine.  Theodorus, who died in February 1862, had been a member of the New York County Committee on Annual taxes, Chairman of the Board of County Canvassers of the City and County of New-York, and a Director in the Phoenix Bank.

The extended Van Tine family were long-time Chelsea residents; growing up in the Theodorus Van Tine home at No. 111 West 38th Street.  Now, on the same block with Charles, sisters Emma and Anna lived at No. 433 West 21st.

Charles died unexpectedly on October 4, 1886.  Two days later at 3:00 his funeral was held in the parlor of No. 411.  The family remained in the house and by 1888 daughter Elizabeth was teaching music at Grammar School No. 32 on West 35th Street.

On June 8, 1893 an advertisement appeared in The Evening World.  “Wanted, a good girl for general housework; must be willing and obliging.”  Whether the family found their “good girl” or not; they would soon be moving.  In 1894 the Real Estate Record & Builders’ Guide noted that Christopher Fine had sold the house to “Mandelbaum & Lewine, on private terms.”

The sale apparently fell through and on January 11, 1895 The New York Times reported that Fine sold the house to David Bonner.  Somewhat astonishingly, Bonner's wife, who had died a year earlier, was Catherine McCunn, the daughter of Judge McCunn's half-brother, Mark.  It had been Catherine and her sister, Elizabeth, who had retained Christopher Fine to break their uncle's will.  If Bonner lived in the house at all, by the turn of the century it appears it was being operated as a boarding house.

The building was sold in 1915 and once again became a private home.  John A. Sheeran, a real estate broker, had run as Republic candidate for assemblyman in 1900 and had been Adjutant in the 69th Regiment Camp No. 93.  By the 1930s it was home to Mary Isabel Malmar and her son Girard.  Mary’s husband, John Jay Malmar who had been an executive with the Corn Exchange Bank had died in 1911.  She died in the in house at the age of 73 on October 4, 1938.

Girard would not remain in the house long, and in 1940 it was converted to apartments—two per floor.  Today little has changed.  With still just two apartments per floor, it endures a grisly but necessary fire escape.  The paned windows have been replaced and some sort of ornamentation at the second story windows—perhaps small cast iron balconies—is missing.  But essentially the house survives intact, including the beautiful Italianate cast iron fencing. 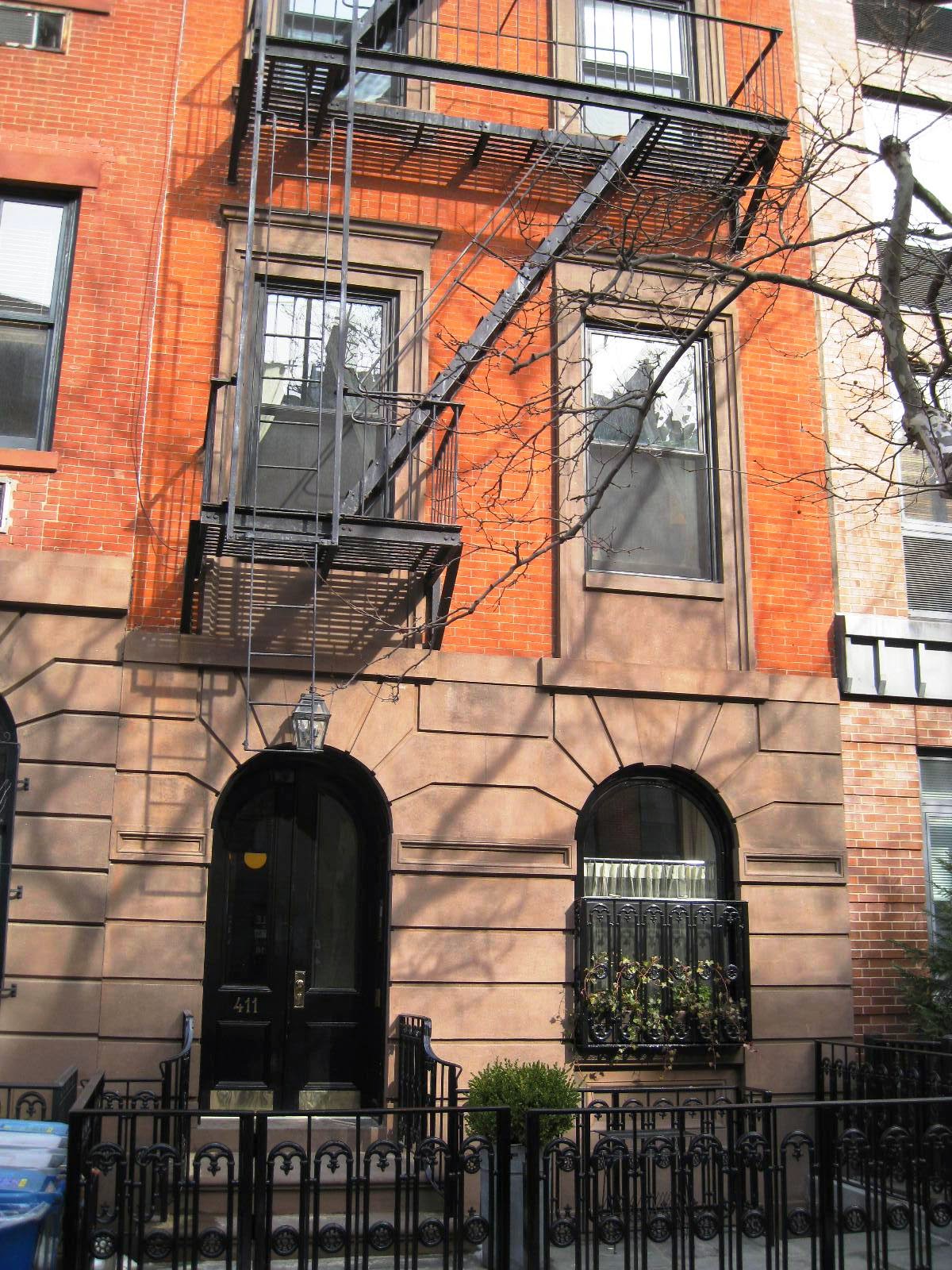 photographs by the author
Posted by Tom Miller at 6:44 AM