The first years of the 20th century saw a renewed interest in things “Colonial;” an interest that was reflected in domestic architecture.  Suddenly, interspersed among the marble and limestone chateaux and palazzos of New York’s wealthy were brick-and-stone neo-Federal and neo-Georgian structures like Andrew Carnegie’s 1903 mansion on upper Fifth Avenue.


In November 1902 William M. Benjamin purchased three brownstone houses at Nos. 119, 121, and 123 East 73rd Street.   The neighborhood was quickly changing into a highly fashionable one and within days he had resold the plots.  The old townhouses would not survive much longer.  No. 123 went to “a buyer who will erect thereon a high-class dwelling,” reported The New York Times.


The buyer was architect Robert Burnside Potter, a member of the firm Robertson & Potter.  He designed and erected a neo-Georgian brick-and-limestone mansion, construction of which began in 1903 and was completed a year later.  By secreting the fourth floor behind a wooden railing, set back in the mansard roof, the architects gave the appearance and proportions of a smaller building. 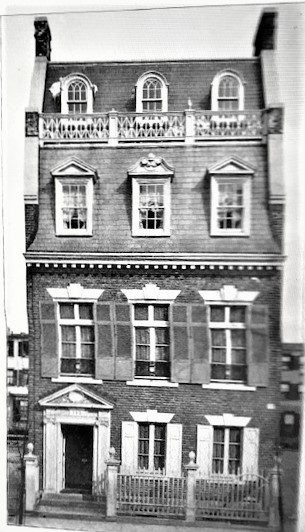 from Cyclopedia of Architecture, Carpentry and Building, 1909 (copyright expired) courtesy of Jim Kane
The title to the completed house was put in the name of Robert Potter’s wife, Elizabeth.  But it would soon become home to Dr. Frederic Grosvenor Goodridge who had married Ethel Iselin two years earlier.  Goodridge came from a socially prominent family and his new wife was descended from three Colonial-period families—Morris, Gouveneur and Philipse.  The 18th century-inspired home was therefore especially appropriate for the couple.


Colonial detailing – splayed keystones above the first and second story windows, a carved shell within the pediment over the doorway, a recessed and paneled entrance and a wonderful scrolled, broken pediment on the middle dormer—lent authenticity to the design.  An American basement was protected by a restrained wooden fence.


Mrs. Goodridge established herself quickly as an accomplished hostess.  Elaborate entertainments were held here for the cream of society.  On January 28, 1910 the house was the scene of a dinner dance.   Sixty guests were invited for dinner at 8:00 after which an additional 100 arrived for dancing and a midnight buffet supper. 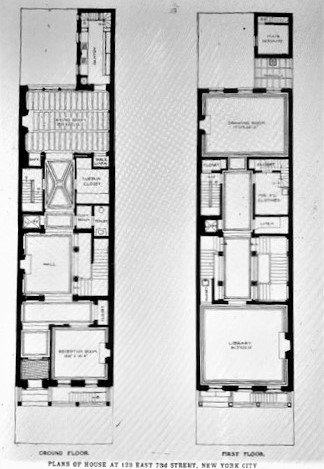 from Cyclopedia of Architecture, Carpentry and Building, 1909 (copyright expired) courtesy of Jim Kane
The splendid home at No. 123 East 73rd Street proved, eventually, inadequate for Ethel Goodridge’s entertaining and later in 1910 they purchased two brownstone houses on East 78th Street where they constructed a double-wide mansion, also in the neo-Georgian style.
The 73rd Street house saw a quick succession of owners.   The Carlfen family, whose 20-year old son tragically drowned the first year they lived here; George W. Miller, whose  new Pierce Arrow motorcar would have been admired on the street; and then, in 1914, Stephen Peabody and his family.
That year was a busy one, socially, for the family.  Dinners, teas and a dance at Sherry’s were hosted for daughter Pricilla’s debut.


But by the early 1920s the Peabodys and the Moens had moved on and the house was owned by attorney Frank Longfellow Crocker, the senior member of Crocker, Johnson & Shores at 5 Nassau Street.  The family owned a country estate in North Haven, Maine.   When daughter Elizabeth returned from school in Paris in 1922, her engagement to a Cleveland businessman was announced.


On November 5 The Times announced that Elizabeth’s wedding to Henry Gilbert Hold “took place quietly yesterday noon at the residence of the bride’s parents, 123 East Seventy-third Street, the Rev. Dr. Henry Evertson Cobb officiating in the presence of the families and a few close friends.”


It was a low-keyed function compared to the entertaining the house had experienced under Ethel Goodridge.


On January 16, 1931 an “international marriage of more than usual interest took place,” as The Times put it.  Barbara Schieffelin had a social pedigree nearly unmatched in New York.  The great-great-great-granddaughter of John Jay, first Chief Justice of the United States, and a direct descendant of Commodore Cornelius Vanderbilt, she married Charles Ion Carr Bosanquet of Northumberland, England.


The Madison Avenue Presbyterian Church was filled with the most notable names of New York society for the wedding.  Among them were the bride’s sister Margaret Louise Schieffelin Osborn and her husband Frederick H. Osborn, the most recent owners of No. 123 East 73rd Street.


Following the ceremony, the Osborns hosted a reception.  The house “was decorated with rosary ferns, white carnations and forsythia,” commented The Times.


Osborn came from a distinguished family, as well, dating to the 17th century in America and was the grandson of millionaire William Earl Dodge.  Although Osborn’s family made a fortune in the railroad business, he served in the American Red Cross in France as Commander of the Advance Zone during World War I.   By the time he purchased No. 123 East 73rd Street, he was a research associate at the American Museum of Natural History, studying anthropology and population.  It was a course of life that would have resounding ramifications later.


The Osborns, who divided their time between 73rd Street and their Garrison, New York estate, were highly involved in progressive reforms.  Osborn was one of the founding members of the American Eugenics Society and was fundamental in the creation of Princeton University’s Office of Population Research.  He is credited with advancements in the understanding that environment plays a greater role than race in IQ levels.


In the meantime, Mrs. Osborn was making her own mark.  In 1937, the year that daughter Margery’s engagement was announced, she held a series of discussions in the home on “Education for Democracy.”


With the onset of World War II, Franklin Roosevelt selected Osborn to chair the Civilian Advisory Committee on Selective Service in 1940.   Before the year was ended, he took over as Chair of the Army Committee on Welfare and Recreation.  The Osborns left East 73rd Street for Washington DC.  By the end of the war, now a Major General, he had earned the Distinguished Service Medal, the Selective Service Medal, a bronze star, and was made Honorary Commander in the Most Excellent Order of the British Empire.


At mid-century the house was owned by Mrs. Margery O. Erickson who converted it to two residences—a lower triplex and a separate duplex on the top two floors.  She sold it in 1952 to Evelyn W. Backer.  Backer held the property only for a year, selling it in August 1953 to Michel Pierre Fribourg and his wife.   The couple announced plans to live in the lower triplex after they returned from a scheduled European trip.


Fribourg was a Belgium-born American who came to New York with the outbreak of World War II to work in his family’s business (he had been headquartered in the London office previously).  He became a citizen, served in the US Army and had taken over the business, Conti-Group Companies, after his father’s death.


In 1964 he made himself famous.  That year he announced the sale of $80 million of wheat and rice to the Soviet Union.  Fribourg was humble.  “Anybody can get grain to sell to the Soviet Union,” he said, “Our business is basically built on ideas and imagination.”


The real significance of the deal, he felt, was that it proved that trade could create communication that simple diplomacy could not.
He was founding director of the U.S.-U.S.S.R. Trade and Economic Council and the U.S.-China business Council.  His charitable works included the Fribourg Foundation, the ContiGroup Foundation and he contributed heavily to schools and hospitals.

Michel Fribourg died in April 2001 at the age of 87.  The new buyers of No. 123 East 73rd Street reconverted the house to a single-family residence.

Today the remarkable neo-Georgian house sits like a small sliver of Williamsburg, Virginia on a stylish side street of the Upper East Side; quite unchanged since its completion in 1904.