From the beginning of the 18th century throughout the 19th century, New York's religious community was dominated by Anglicans (or Episcopalians post-Revolution).  Their patience with the immigrant Scots and Irish Presbyterians was short at best, yet the original persevering group of eighty worshipers organized the First Presbyterian Church congregation in 1716.

Their little church on Wall Street was closed throughout the American Revolution when the British occupied it first as a barracks and later as a stable.  It was destroyed in the Great Fire of New York in 1776 and the two subsequent buildings were also destroyed by fire, the last in 1835.


By this time New York was spreading northward and after lengthy discussion, land was purchased uptown on Fifth Avenue at 12th Street around 1844 on the outskirts of the expanding Village of Greenwich.  Around Washington Square to the south, fine Federal mansions had already begun rising.

English-born architect Joseph C. Wells was given the commission for the Gothic Revival style building. Wells based the bulk of the building on the Church of St. Saviour in Bath, England and modeled the central tower after the Magdalen Tower at Oxford.  Interestingly, the same tower had inspired Richard Upjohn for his Church of the Ascension just one block to the south, completed in 1841.

﻿﻿
Wells made optimum use of the broad block-wide lot, setting the brownstone structure back from the street and surrounding the grounds with heavy cast iron fencing.  Rich Gothic tracery both in the tower and large side windows were complimented by stone quatrefoils along the roofline. 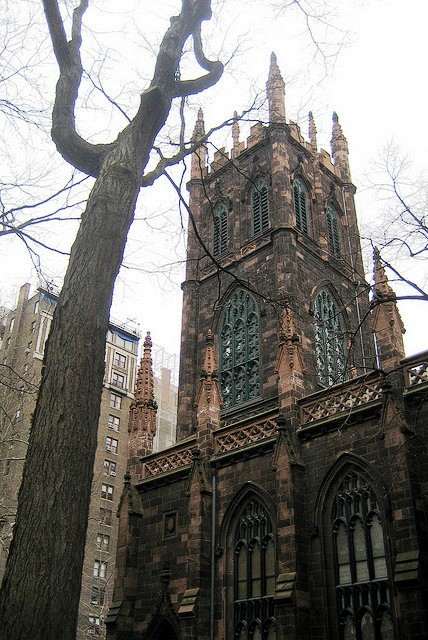 Construction was completed in January 1846 and the New York Herald remarked that “The interior of the edifice presents a novel and yet a very agreeable and impressive aspect.  It is of the perpendicular Gothic Style, without columns to sustain the long extending arch, which makes the seats in a remarkable degree available and unobstructed.  This is a new feature in modern architecture.”  According to The New York Times “The new edifice cost $55,000.”   (That amount would equate to around $1.6 million in 2020.)

The Wall Street churchyard was excavated and the deceased re-interred in the south lawn of the new church, according to former deacon John Rhodes.  The gravestones, however, were never re-erected; instead they were stored in the church house basement.

Throughout the 19th century memorial windows were donated by members of the congregation, including three by Tiffany Studios, two by Charles Lamb (of J. & R. Lamb nearby on Sixth Avenue) and five by Maitland Armstrong.  In 1893 McKim, Mead & White, then the foremost architectural firm in the country, was hired to design a south transept; creating one of the most picturesque corners in the city.

﻿﻿
﻿﻿First Presbyterian remained on the cutting edge of theological and social ideas and, on June 25, 1911, initiated the first of its Sunday evening outdoor services “in an attempt to bring the institution into closer touch with the masses.”

“Since New York Was young,” said pastor Dr. Howard Duffield, “it has been a custom for its people to gather on the steps of their dwellings at the end of a hard day’s work and by association with others like themselves to learn that their struggles and tribulations are part of the common lot, and to find sympathy and encouragement in place of their loneliness.  That is just what we are doing this evening.” 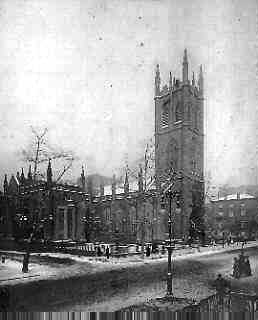 Two nearby congregations merged with First Presbyterian in 1918 and, at the same time, called upon fiery Baptist minister Dr. Harry Emerson Fosdick to be associate pastor.  Fosdick was renowned for his outspoken opinions against racism and social injustice.

A year later interior renovations were initiated when a chancel was added and the reredos, painted in 1917 by Taber Sears, was relocated to that new wall and repainted.  The striking blue rose window was donated by Robert W. de Forest as part of the renovation.  Completed in September 1920, the 40-foot extension and interior changes, designed by architect John Almy Tompkins of the firm of Grosvenor Atterbury, cost more than $3 million in today's money.

“One of the most striking innovations in the new furnishings is a highly carved Gothic pulpit of oak,” reported The New York Times, “standing ten feet high.”

In the meantime, Dr. Fosdick’s popularity grew as did his following; the church membership burgeoning to 1,800 congregants.  His rhetoric however, offended fundamentalist members and in 1924 amid great controversy and dissension, he resigned his post.  On October 23, he spoke publicly in the church after having formally resigning his position a few days earlier.  Crowds jammed Fifth Avenue, tying up traffic in an attempt to hear his final words.

Toward the end of the 1950's, the need for more space for church programs led to the construction of the Church House toward the rear of the church on 12th Street.  At a time when mid-century sympathies regarding harmonious blending of historical and modern architecture were weak at best, the end product could have been disastrous.  Instead, architect Edgar A. Tafel, a student of Frank Lloyd Wright, created a work of art.  The AIA Guide to New York notes that the main church’s Gothic quatrefoils “form the motif for the adjacent, properly reticent, Church House, built more than a century later."  It went on to say that "its copper-clad structure shares Wright’s sense of materials and proportion.”  ﻿﻿﻿﻿﻿﻿﻿﻿﻿In addition to the quatrefoil design, Tafel colored the brick of the new building to match the brownstone of the church. The $1 million addition was dedicated on May 15, 1960.

The handsome iron fence was restored in the 1980's and a decade later a major restoration of the south wing was completed.

First Presbyterian’s tradition of support for social justice and tolerance lives on today. The racially-mixed congregation is gay-inclusive and is active in a homeless shelter program. The handsome English church and churchyard on lower Fifth Avenue remains a serene and welcoming oasis.
Posted by Tom Miller at 2:48 AM