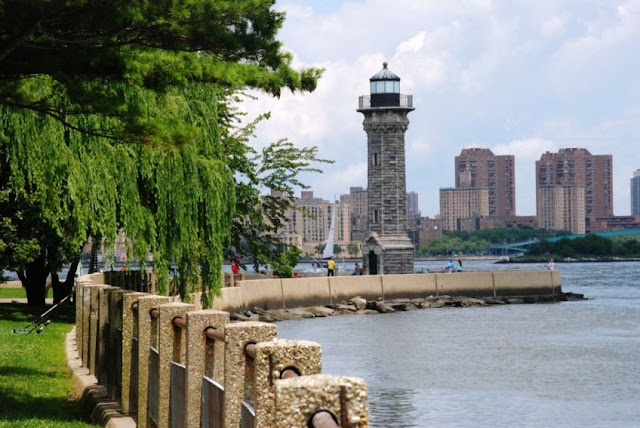 In 1828 New York City faced the problem of a smallpox epidemic as well as a lack of facilities for the mentally ill, convicts and debtors. The city fathers purchased the East River island on which James Blackwell ran his farm. For $32,500 they acquired adequate land to erect a smallpox hospital, an insane asylum, a debtors house and a prison.


Seven years after he had designed the breath-taking Grace Church on Broadway, James Renwick, Jr. was given the commission for the Smallpox Hospital, completed in 1850, the Workhouse, and the City Hospital. In 1872 he was consulted again, this time for a lighthouse on the northern point of the island.

Renwick designed a 50-foot tall Gothic structure using the same gray gneiss use for the other city-owned structures. The stone was quarried on site by the prisoners, greatly reducing the costs of the buildings. The octagonal lighthouse used rough-cut stones to imitate a centuries-old building; its entrance sheltered by a modest Gothic arch.

At this point the myth and the history of the Blackwell Island Lighthouse become blurred.

Two years before construction began, in 1870, the warden’s report of the Lunatic Asylum clearly indicated that an "industrious bur eccentric” inmate had constructed a well-built seawall which reclaimed marsh land. The warden commented that the patient “is very assiduous, and seems proud of his work, and he has reason to be, for it is a fine structure, strong and well built.”

Some legends contend that instead of a seawall the inmate, who feared a British invasion, built a fortress.

Whichever (if either) story is correct, the structure had to come down to make way for the lighthouse.

Traditional folklore on Roosevelt Island (the last name given to Blackwell Island) goes on to say that the inmate, John McCarthy, was bribed or paid to destruct his own fortress; and then he was given the allowance to build Renwick’s lighthouse.

The legend becomes more muddled when the name Thomas Maxey, Esq. is added to the mix. Both Maxey and McCarthy are named as the builder (Maxey was apparently also an inmate); and there is the possibility that both are the same man.

An inscription in stone at the lighthouse reads:


This is the work
Was done by
John McCarthy
Who built the Light
House from the bottom to the
Top All ye who do pass by may
Pray for his soul when he dies. 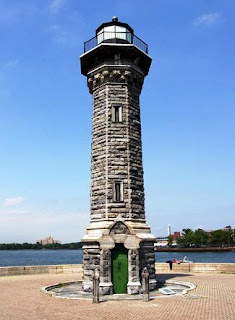 Whoever built the Blackwell Island Lighthouse did a professional job. Additionally, the concept of a single man building such a structure is difficult to accept. Nevertheless, there is no surviving documentation to confirm or refute the legend.

The lighthouse was in use (although occasionally not working) until around 1940. In the 1970s, when most of Roosevelt Island’s historic buildings were falling into disrepair, a modest restoration was done using private donations. A complete restoration was initiated in 1998 through an anonymous donation of $120,000, making the light functional again.

The mysterious lighthouse was designated a New York City Landmark in 1975, at which time the Landmarks Preservation Commission said “The rock-faced stone and the sparing uses of boldly scaled ornamental detail give the lighthouse the strength and character of a medieval fortification. In its isolated setting the lighthouse is a prominent and dramatic feature of Roosevelt Island.”
Posted by Tom Miller at 2:43 AM