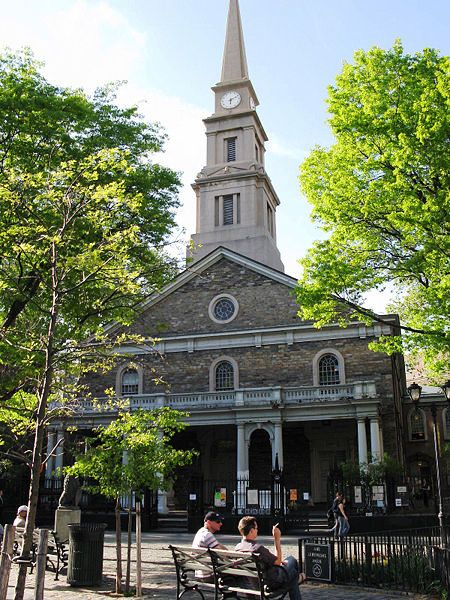 Peter Stuyvesant purchased his farm, or bouwerie, from the Dutch West India Company in 1651. By 1660 he had built a family chapel on the grounds where, when he died in 1672, he was buried in a vault below.

As Peter’s grandson, Petrus, developed the land towards the end of the 18th Century, laying out a network of roads and erecting elegant family homes, he donated the chapel and its grounds to the Episcopal Church. The stipulation of Stuyvesant’s bequest was that a new chapel be built there. In compliance, the Church laid the cornerstone of Saint Mark’s Church-in-the-Bowery on April 25, 1795.

The building, bounded by the present-day 10th Street, Stuyvesant Street and Second Avenue, was completed in 1799 and consecrated on May 9 of that year. Alexander Hamilton, the close friend of Stuyvesant’s son-in-law Nicholas Fish, provided legal assistance in incorporating St. Mark's Church, making it the first Episcopal parish independent of Trinity Church in the new world.

The parish of wealthy New York society, it was a graceful Georgian fieldstone building designed by John McComb, Jr., who had six years earlier designed the impressive Georgian home of James Watson at 7 State Street.

In 1828 the wooden Greek Revival steeple was added, following the designs of architects Martin Euclid Thompson and Ithiel Towne. In 1836 Thompson was called back to revamp the interior of the church at which time he removed the chunky square pillars supporting the balcony in favor of the slim, reeded Egyptian Revival pillars which survive today. Two years later the architect designed the heavy wrought-and-cast iron fence that surrounds the property.


For decades after its consecration the church was seemingly a work-in-process and in 1858 the imposing cast iron Italianate portico was added. The porch is attributed to James Bogardus, a pioneer of cast iron architecture who planted the seed for the ornate cast iron facades that would eventually line lower Broadway.

In 1866 James Miller in his Stranger’s Guide for the City of New York said of St Mark’s “The steeple is lofty, but somewhat venerable in appearance, which is indeed the character of the entire structure. The church is venerable also on account of its historic associations; it stands on what was the estate of Petrus Stuyvesant, the last of the Dutch governors and his remains rest in a vault under the church, over which, on the east side, is a table indicating the fact. Here also repose the mortal remains of the English governor, Col. Sloughter and those of the American Governor, Tompkins.”

Miller neglected to mention that Daniel Tompkins was also Vice President under James Monroe. Also buried in the churchyard on the east and west sides of the church are Nicholas Fish (Revolutionary War officer, US Senator, New York State Governor and Secretary of State to U.S. Grant), retailer A. T. Stewart (his body was stolen from the graveyard and held for ransom contributing to Mrs. Stewart’s mental breakdown), Abraham Schermerhorn (United States Representative and father of Caroline Astor), Philip Hone (Mayor of New York 1825), Commodore Matthew Perry (who forced Japan to open trade relations with the US), and other famous 19th Century figures.


The church was stuccoed over at some point and 1936 photographs show an interesting Edwardian fresco, much in the style of Maxfield Parrish, in the pediment over the portico. Here animals and birds lounge in an idyllic setting under spreading trees.

The 20th dentury saw St. Mark’s become increasingly involved with and supportive of the arts. The trend was started by Reverend Dr. W. Norman Guthrie who was Rector from 1910 to 1937. In 1923 Guthrie, who felt that a person’s spirituality could be fostered through the arts, wrote The Relation of The Dance to Religion.  He invited Isadora Duncan to perform at the church and later Martha Graham danced here.  From that start, the church’s Danspace Project is now renowned for promoting new work in dance. Michael Kaiser, President of the John F. Kennedy Center for the Performing Arts has said “Danspace has played a significant role in the arts ecology of New York and the entire dance world."

When a group of poets lost their meeting spot at the Telegraph Bar in 1966, Allen Ginsberg approached the Rector asking if they could meet in the church. They could.  And with that poetry joined dance at St. Mark’s.  Poetry readings were conducted by Ginsberg as well as W.H. Auden, Edna St. Vincent Millay, Amy Lowell, Carl Sandburg, Kahlil Gibran, and William Carlos Williams. Eventually hundreds of writers and other performers appeared here. Sam Shepard staged his first few plays from St. Mark’s and visitors have been entertained by the likes of Adrienne Rich, Alice Walker, Yoko Ono, John Cage and Patti Smith.


The spiritual and artistic life of St. Mark’s Church-in-the-Bowery was nearly extinguished when, on July 27,1978, a devastating fire tore through the structure, nearly destroying it. New Yorkers formed the Citizens to Save St. Mark’s organization that raised funds for the reconstruction of the building. The church hired architect Harold Edelman to direct the restoration. Edelman also designed the abstract stained glass windows that replaced the 19th Century balcony windows which were destroyed.

Today the historic St. Mark’s Church-in-the-Bowery is as vital to the neighboring community as it was in the early 19th century. The oldest site of continuous religious practice in New York City, it continues as a fundamental force in developing arts in America.