The Stuyvesant family was one of the oldest and most prestigious families in Manhattan in the years after the American Revolution. Peter Stuyvesant had acquired the family farm in 1651 from the Dutch West India Company, a tract which today would encompass all the land east of 4th Avenue, from 5th Street to 17th Street. 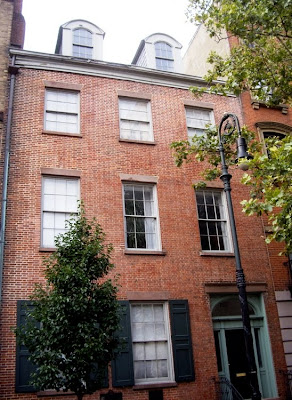 In 1797 Stuyvesant’s great-grandson, Petrus, laid out a street plan on the estate using a compass to align the roads in an east-west, north-south direction. One of these streets was named “Stuyvesant Street.”
When the engagement of Petrus’ daughter Elizabeth to Revolutionary War officer Nicholas Fish was announced, Stuyvesant had work started on an elegant Federal-style house as a wedding present. Fish was the youngest commissioned major in the history of the United States Army at 18 years old and had served at Valley Force. He became a close personal friend of Alexander Hamilton.
The house was completed in 1803 and fully reflected the young couple’s social station. The red brick, Flemish bond façade rose three stories to the attic floor. Two arched dormers with double keystones pierced the pitched slate roof and an elegant iron fence topped with palmettes protected the English basement.

Photo by Dmadeo
In 1808 Elizabeth gave birth to a son, named Hamilton after Alexander Hamilton. Hamilton would grow to become a lawyer, then enter politics becoming Governor of New York and, prior to the Civil War, a United States Senator. When he retired in 1857, he took his wife and eight children on an extended two-year tour of Europe. In 1869 he reluctantly accepted Ulysses S. Grant’s appointment as Secretary of State, becoming what some historians deem the strongest member of the Grant Administration. The National Register of Historic Places noted “Fish’s cautious day-by-day advice saved Grant from some embarrassing blunders.”

Prior to all that, however, Hamilton Fish's birthplace at 21 Stuyvesant Street had been threatened.  In 1811 a three-member commission laid out the famous grid plan for Manhattan Streets above 14th Street. Rather than use strict compass direction, they based their grid on the slightly-askew orientation of the island. Any roads and buildings that did not comply with the new plan were to be destroyed.

Petrus Stuyvesant’s network of roads did not comply.

Stuyvesant Street was a private lane for the family, lined with five Stuyvesant houses. The family voiced their dissatisfaction; apparently quite well. They were granted a special dispensation, their private diagonal road -- which would now be reduced to just over a block long -- was deemed a thoroughfare “for the accommodation of a large and respectable Congregation attending St. Mark’s Church as well as the owners and occupants of several large and commodious dwelling houses.”

The family houses were saved and it was here at the house at 21 Stuyvesant Street on the evening of September 10, 1824 that the Marquis de Lafayette was entertained by Nicholas and Elizabeth Fish during his tour of all 24 states.

Nicholas Fish died in 1833 and was buried in the nearby churchyard of St. Mark’s Church-in-the-Bowery. Hamilton Fish and his wife stayed on in the house until 1838, and Elizabeth remained until her death in 1854. Although the family retained ownership of the property until around the turn-of-the-century, things began going downhill for the house. 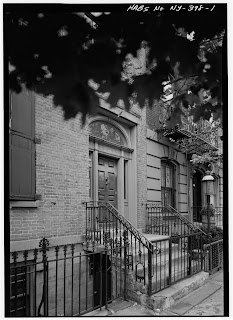 On January 27, 1861 Daniel T. McFarland was living there when his basement door was broken into and a burglar made off with a copper boiler worth $50. (Police officer Eagan captured the thief a short distance away with the boiler in a hand cart.)

T. E. Carey was a plumber when he rented here in 1884, the same year that he was arrested for counterfeiting. Carey and two accomplices were drunking at Joseph P. Strack’s saloon on East 3rd Street when they tried to pass a fake dollar bill. Strack ordered them out of his saloon and rushed to the 17th Precinct Station House. Carey and the others were caught “in Marcus Popper’s saloon, No. 53 First-street” as reported in The New York Times.

Photo Library of Congress
A year later Louis Brandt, a wood carver for the A. S. Nichols & Company's ornamental mantel works, was living in the house. When the other carvers went on strike, Brandt kept working. For days he was given escort by the police to ensure his safety; however on May 15 the police officer was late. A group of striking carvers approached Brandt on his way home and, fearful of his safety, he pulled a gun and shot one of the men in the groin. The entire group, including Brandt, was arrested.

Throughout the 19th and most of the 20th Century, historic homes received little protection or public interest. The Stuyvestant-Fish house remained a rooming house until 1964 when advertising executive F. Philip Geraci purchased it for around $140,000 and returned it to a private residence.

Beginning in 1967 Geraci waged an all-out restoration of the property. Using photographs and surviving elements he brought the home back to its 1804 appearance. The original 8-panel front door, removed in 1838, was replicated. Inside, fireplaces were reproduced based on the last existing original. Doorknobs were copied from the single 1803 survivor.

After 30 years in the home, Geraci donated it to The Cooper Union’s College of Art and Engineering, which uses it to house its president and family. The exterior of the structure, which the Landmarks Preservation Commission said “displays beauty of proportion, notable restraint and those details that indicate an outstanding Federal house,” appears much as it did when the Nicolas Fish and his bride moved in. 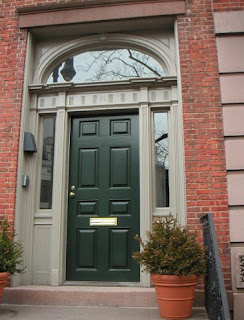 Inside original details remain despite the property’s somewhat rough handling. In the first floor front hall, a semielliptical transverse arch survives, the original staircase with its delicate spindles and handrail is still there. On the second floor 200-year old stencilwork is intact. There are even side windows from when the house stood alone.
The house was designated a New York City Landmark in 1965 and was included on the National Register of Historic Places in 1972
Posted by Tom Miller at 2:51 AM