Mary Ann C. Rogers was a player in the nearly men-only real estate development game in the decades before the outbreak of Civil War.  In 1854 she erected a row of six 21-foot wide Italianate style residences on the north side of West 13th Street, just east of Greenwich Avenue.  Like its identical brick-faced neighbors, No. 245 was three bays wide and three stories tall above a rusticated brownstone basement.  The high stone stoop led to the segmentally-arched, double-doored entrance.  Its horizontal cornice topped by undecorated blocks was a departure from the carved pediments and foliate brackets so popular in the Italianate style.

By the end of the 1860's No. 245 was being operated as a boarding house.  The upscale nature of boarding houses was often judged by the number of tenants and their allotted space.  Boarders at No. 245 paid for suites encompassing entire floors.  There were, therefore, no more than two paying families at any time (the landlady would have lived on the parlor floor or basement).

The proprietor left in the spring of 1869, leaving the owners of the house scrambling for a new proprietor to run the boarding house.   An advertisement in The New York Herald on April 28, 1869 read "To Let--Furnished--A three story high stoop House, modern building; rent reduced; part taken in board, and boarders that will remain."

Among her boarders in 1872 was the family of Henry Evesson, Jr.  He and his wife, the former Florine Augusta Bassford, had four children, Isabelle, Estelle, and Harry (another son, Charles, came along in 1874).  Both Isabelle and Estelle would go on to careers in the theater.  Isabelle had a successful stage career and appeared in two silent films.  Estelle would also be an actress, as well as a playwright.  One of her plays, A Puritan Romance, was written as a vehicle for herself and her sister.

In January 1882 William Mulry purchased No. 245 for $9,740, or just over a quarter of a million in today's dollars.  Mulry was well-known in real estate circles, a member of the Real Estate Exchange and a member of the building firm of Mulry Bros.  Interestingly, it was not William, but the family of his brother, Thomas Maurice Mulry, who moved into the house.

The Mulry brothers were devout Catholics who had arrived in New York from Ireland in the 1840's.  They earned their living as hard-working construction laborers know as “cellar-diggers.”  Thomas Mulry, Sr. met and fell in love with Parthenia M. Crolius.  They married, despite the objections of her father, Clarkson Crolius.  According to the New-York Tribune later, “He came of Dutch and Quaker stock, and, being a stanch Protestant, was strongly opposed to the marriage of his daughter to the young Irish Catholic.”  Crolius was, no doubt, even more deeply concerned when Parthenia converted to Catholicism at the time of the marriage.

There would eventually be 14 children in the Mulry household.  Four sons would go on to become priests and two daughters would become nuns.  By the time Thomas and Parthenia moved into No. 245 their children were grown.   Following William's death in 1893, the firm was renamed Thomas Mulry & Son, with Thomas, Jr. as a partner.

Parthenia died on May 23, 1902.  Her funeral was held in the house three days later, followed by a service at St. Francis Xavier's Church where, according to the New-York Tribune, "a solemn mass of requiem will be offered for the repose of her soul."

Following his father's death four years later, Thomas Mulry Jr. sold No. 245 on June 16, 1906 to Mary J. Mitchell.  The price, around $425,000 today, reflected the still respectable tone of the neighborhood--one that would draw the attention of the Florence Crittenton Mission for Fallen Women.

The organization had been founded in 1883 "to aid and encourage destitute, homeless, and depraved women who wish to seek reformation."  Its home and mission had been at Nos. 21-23 Bleecker Street from its inception; and now looked to open a branch home.   The 1909 Sixty-Fourth Annual Report of the Prison Association of New York listed the Florence Crittenton Mission as running a "home for the reformation of fallen women and young girls" here.

On May 14, 1913 The New York Press reported that Mary Mitchell had sold No. 245 to the Mission.  The article noted that the group has recently sold the Bleecker Street property which "it occupied for about thirty-five years."  As owners, the Mission was now free to make changes to the house.  "Extensive alterations will be made to the building, including an extension in the rear part of the lot."

Some of the women who received the services of the Florence Crittenton Mission lived in the building (termed inmates).  The organization also held gospel services here.  The managers attempted to help the prostitutes and unwed mothers get back on their feet.  The Mission espoused its goal in 1912 as "Not to lock people up away from society, but to help them to become useful members of society."

Living here was not a free meal ticket.  Household tasks were allotted to the residents.  "One girl attends to the laundry of the household articles, another does the porches and parlor, two share the chamber work, another takes care of the dining-room, and so on," explained a matron, Miss M. M. Hinchcliff to The Evening World.

On November 28, 1913, the New York Evening Telegram reported on the first Thanksgiving here.  "The Florence Crittenton Mission, in its new home at No. 245 West Thirteenth street, provided for the feeding of three hundred, including the girl inmates and other worthy poor."

The policies of the Mission would receive criticism decades later as attitudes towards unwed mothers changed.  At the time, many families saw the Mission as a place to send their pregnant daughters, thereby hiding their condition and avoiding shame.  The women were required to give up their babies for adoption.

The Mission moved out in 1919 and leased the house for a year.  In June 1920 it was sold to Charles F. Goetz who almost immediately resold it to Henry Mundt.  By the early Depression years the residence was being operated as a rooming house.

Among the tenants in 1935 was 25-year old Stanley Wescott.  He and 20-year old Joseph Fletcher made their livings in a daring way--payroll robberies.  Workers were paid in cash until the second half of the 20th century.  Wescott and Fletcher had successfully stolen the $7,500 payroll of Swift & Co. on August 23, 1934 (more than $141,000 today), and now they plotted to rob a Pennsylvania coal mining payroll.

After doing their research, the two men learned that payroll for the coal workers arrived at the Cambria County Post Office.  They just were not quite sure on which day.  They took a hotel room in St. Michael, Pennsylvania, then dropped into the post office every afternoon, asking if they had any mail.

But their "flashy clothes" drew the suspicions of the postmistress, who did some investigation.  She finally took her concerns to the constable, noting they "hung around town with no visible means of support."  On September 16, 1935 the New York Post ran the headline "Slickers Trapped by Postmistress."  Weapons were found in their hotel room.  They were not only charged with attempted robbery,  but were identified in the Swift & Co. theft as well. 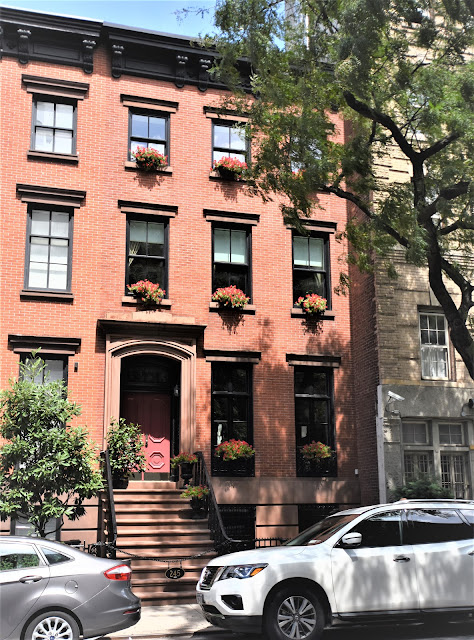 In 1946 the house was converted to a duplex in the basement and first floor and one apartment each on the upper floors.  Then, in 2014 it was reconverted to a single family house by artist Angel "Vlady" Oliveros.  To replace the lost interior elements, he recycled artifacts like banisters from the Plaza Hotel and an "antique earthenware soaking tub from the 1920's," according to a realtor.  Oliveros put the house on the market in 2016 for $16.75 million.