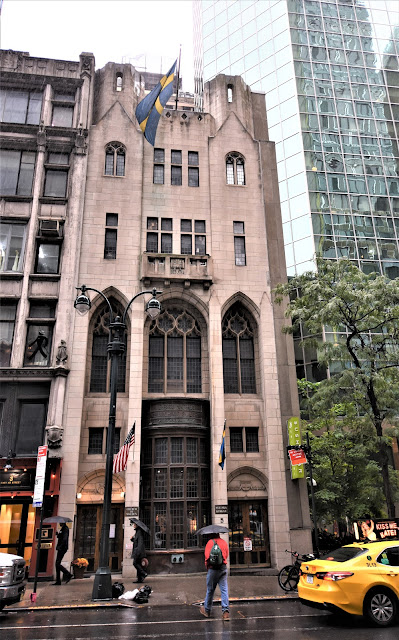 Merchant James Talcott was the founder of James Talcott Co., described in 1907 by Who's Who in New York City as "controlling the output of about two hundreds mills of foreign and domestic manufacture of woolens, cottons, silks, etc."  He was, as well, a director in several corporations and a bank.  Educated at Williston Seminary, he and his wife, the former Henrietta E. Francis, gave generously to charities throughout his life.  He was a founder of Northfield Seminary in Massachusetts and the couple funded a professorship of religious instruction at Barnard College (Henrietta was a trustee of that institution).  Upon his death in 1916 he left Henrietta a fortune of more than $3.8 million.

Within the next year she made massive gifts to worthy causes including funds for the land and construction of a new building for the New York Bible Society.  The society was a venerable institution, formed in 1809.  Its main purpose was to acquire and distribute copies of Bibles and Testaments.

Early in his career Anthony had been employed in the architectural offices of Cram, Goodhue & Ferguson--best known for its Gothic Revival style churches.  Upon setting off on his own, Anthony brought that expertise with him, modifying the Gothic style to the changing times.

The New York Bible Society published a quarterly magazine, The Bible in New York.  The feature article in its February 1921 issue began "No description can give an adequate idea of our new Bible House at No. 5 East 48th street, New York.  It must be seen in order to be appreciated."

Anthony had produced a striking limestone-faced structure arranged in three vertical bays.  His 1920's take on the Gothic style has been called "streamlined Gothic" and he touched it with occasional Arts & Crafts elements, especially in the top floor gallery and the two-story barrel-shaped reading room in the center section.


Although it was the height of a six-story building, there were technically only four floors.  Both the ground floor reading room and the assembly hall above it were double-height.  Tall Gothic arches culminated in leaded glass windows.  Directly above the central window a picturesque Juliette balcony clung to the facade.   The end bays rose to form octagonal turrets, connected originally by a charming roofed gallery.


The building was dedicated on April 25, 1921.  It began with a religious service at the Collegiate Church of St. Nicholas on 48th Street and Fifth Avenue and concluded at the new building.  The New-York Tribune reported "A special police escort arrested traffic in Fifth Avenue while the assemblage crossed to the Bible House."  A bronze table in the main hall was unveiled that evening which read:

In recognition of the active interest which Mr. James Talcott has always taken in the distribution of the Scriptures, this building is given to the New York Bible Society.

On September 10, 1921 The Publishers's Weekly wrote "Nothing is lacking in equipment to make this a real center for religious work in New York.  Besides the large salesroom, there is an auditorium which will accommodate at least two hundred persons, spacious committee rooms, which adjoin a dining-room and kitchen, and a section given over to hospital flower service, with devices in which flowers may be kept fresh."


Architecture magazine called it "one of the most interesting and suitable small business buildings in New York."  The Fifth Avenue Association agreed, awarding the New York Bible Society Building second prize in the "alterations" category.  Architecture commented in its December 1921 issue, "We should have [been] inclined to put it number one, for it seems an especially happy and appropriate design for its purposes with its elements of ecclesiastical Gothic."

The auditorium was also used for presentations and lectures.  On December 19, 1921, for instance, The New York Herald announced "Dr. A. C. Gaebelein will lecture on 'The Disarmament Question in Light of the Bible."

Rev. Dr. George William Carter, the General Secretary of the society, lived in the building.   Along with the hundreds of Bibles that were routinely distributed, he took note of current events and reacted with special presentations.  Before President Warren Harding attended the Conference on the Limitation of Armament in October 1921, he received a Bible.  The New-York Tribune reported that it "is said to be one of the finest prints of the Scriptures published."


And after Captain A. E. Matthews died aboard the United States Shipping Board freighter Hatteras, Carter read reports that "there was no Bible on board for use in the burial service."  Rev. Carter immediately announced "that his society would present one or more Bibles to every vessel of the United States Shipping Board and that he would have the name of the ship placed in gold letters on the front of the Bible," as reported by The New York Times on January 5, 1923.


The number of Bibles distributed by the Society was prodigious.   And the process was sometimes done with flair.  On April 10, 1926 The New York Times reported "Carrying 7,000 Bibles which they will place in hotels, 1,000 young people will march up Fifth Avenue tomorrow afternoon under the auspices of the New York Bible Society...The consignment will bring the total number of Bibles distributed in hotels by the society to 77,000.  The paraders will have a police escort."  That year the Society circulated nearly one million copies, printed in 67 languages, in New York City alone.

The gifts prompted by current events may have sometimes been more about public relations and positive publicity than religious outreach.  A month after Colonel Charles Lindbergh thrilled the world with his non-stop flight from New York to Paris, newspapers nationwide reported that the New York Bible Society had presented him with an Oxford Bible.  The cover was imprinted in gold lettering:

Presented to
Colonel Charles A. Lindbergh
in recognition of
Faith, Courage, Heroism,
by the
New York Bible Society,
June 13, 1927

In October 1959, the year of its 150th anniversary, the Society announced how it intended to fight the scourge of juvenile delinquency.  New York City was plagued with teen gangs defined along racial and ethnic lines.  Puerto Rican gangs "rumbled" with Italian gangs; whites with blacks.

The New York Times reported that it had "allocated 5,000 Bibles, 10,000 Testaments and 25,000 Scripture portions in English, Spanish and Italian for distribution in the city's racial tension areas."  The article explained "The society rightly took the position that with a Bible in every home in the troubled sections, 'the prospects of a peaceful and Christian solution' to the youth crime problem are brighter."

The New York Bible Society operated from its distinctive headquarters until 1978 when the building was sold to Svenska Kyrkan, or the Swedish Seamen's Church.  The group had been founded on Water Street in 1873. 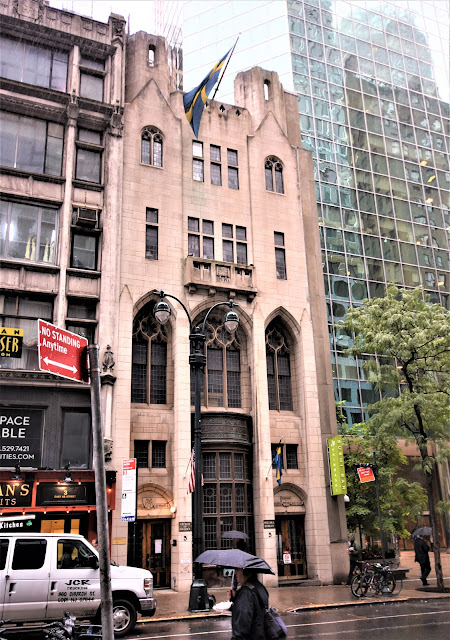 Minimal alterations to the building were made.  Today Svensky Kyrkan operates a café, holds Swedish language classes, and celebrates mass every Sunday.  Little changed inside and out, the building is one of Manhattan's hidden treasures.