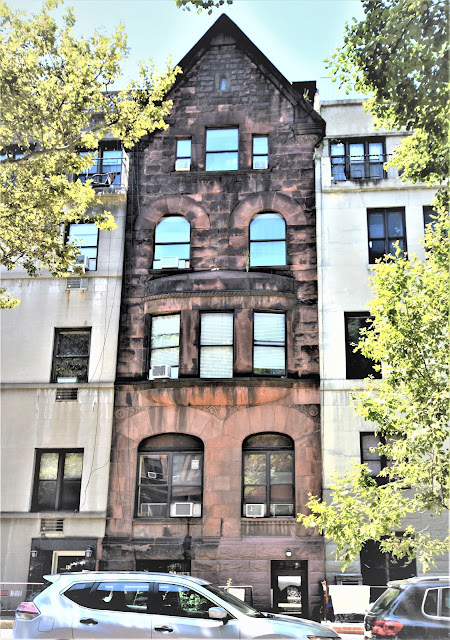 Developer James T. Hall completed an ambitious row of ten upscale residences on West 75th Street, between Columbus Avenue and Central Park West in 1890.  That he targeted well-to-do buyers was evidenced in the cutting edge amenities like the complex indoor plumbing featured in a full page article in The Engineering and Building Record on August 30, 1890.  It described how each house had a copper-lined tank fitted into a "special alcove" in the attic, filled by pumps in the rear extension.  The new homeowners would enjoy hot and cold running water, flush toilets, and state of the art laundry facilities.

The article ended by noting that "George H. Budlong...was the architect of the houses."  No longer a household name, Budlong had designed the string of homes in--basically--the Romanesque Revival style.  While some designs were repeated, he made no attempt at a balanced pattern and mixed them seemingly indiscriminately.

No. 42 was faced in rough-cut stone which added to the medieval flavor of the style.  A tall stone stoop led to the arched double-doored entrance.  Budlong gave a nod to the Queen Anne movement by filling its transom and that of the wide parlor window with colorful stained glass.

A rounded bay filled the second floor.  It was ornamented with Romanesque details and a decorative rope molding.  Unlike the other flat-topped bays along the row, this one wears a stone hood, seemingly original.  The arched openings of the third floor appeared larger by Longbud's use of beefy stone voissoirs.  Above the group of three fourth floor windows, a tiny, stone-framed opening pierced the attic gable.


The house became home to the Joseph Carmoreau Hatie family.  Hatie was secretary of the Mutual Fire Insurance Company and he and his wife, the former Mary G. Heyl, had two children, Lillian Stafford and Joseph, Jr.   Hatie was descended from what one newspaper termed "an old New York family."

Mary's family were decidedly military.  Her brothers were Dr. Theodore C. Heyl, a retired surgeon of the United States Navy (whose son, Ashton, by now was an assistant surgeon in the Army), Army Captain Charles H. Heyl, and Colonel Edward M. Heyl, Inspector-General of the Army.

Like all well-to-do families, the Haties escaped the city's heat at fashionable watering holes each summer.  But they also took a break from its frigid cold, as well.  On February 1, 1894 the Sacramento, California newspaper The Record-Union, noted that "Mr. and Mrs. J. C. Hatie, Miss Hatie, [and] Master J. C. Hatie, Jr." had arrived at the Golden Eagle Hotel.

Among the training necessary for teen-aged children of society to function easily in their upcoming whirl of debutante entertainments, weddings and other affairs was dancing.  Dance classes were organized by socialites to handle that issue.  On February 7, 1893 The World reported "Mrs. J. Carmoreau Hati [sic] of No. 42 West Seventy-fifth street gave a luncheon yesterday to the patronesses of the Wednesday evening dancing class."  It was a decidedly French-themed event.  "This was a mignonette luncheon and the flowers and embroidered table drapery carried out in detail the green and white effect."

Late in 1895 the Haties had house guests, Navy Lieutenant William Stetson Hogg and his wife, the former Clara W. Heyl.  Clara was the Mary's niece, the daughter of Theodore C. Heyl.  Her marriage to the Navy man had added to the military tradition of the Heyl family.

On December 17 The Press reported "Miss Hatie, daughter of Mrs. J. C. Hatie of No. 42 West Seventy-fifth street, will give a dance this evening at her mother's home in honor of Mrs. William Stetson Hogg."

In 1896 the Haties again took a February trip.  The New York Press reported that they "leave town on Friday evening for the Mardi Gras festivities in New Orleans.  They will also spend some time in St. Augustine, Fla.  They will return in three weeks."

The family returned just in time for another house guest--Theodore C. Heyl.  The visit ended tragically.  On March 23, 1896 The Record-Union reported "Dr. Theodore C. Heyl, a surgeon (retired) in the United States navy, died suddenly last night at the home of his brother-in-law, J. C. Hatie, 42 West Seventy-fifth street.  Death was due to heart disease."

The military tradition of the family continued when Lillian's engagement to Lieutenant Edmund Luther Butts of the United States Army was announced on February 19, 1899.  The wedding was held in the house on December 1.

And Joseph, Jr. would eventually go on to a distinguished military career, as well.  By the time of his marriage in 1921 he had achieved the rank of major in the Army and was recognized for his performance during World War I.

But long before that the Haties had left West 75th Street.  No. 42  was sold in February 1900 to Thomas J. Brady and his wife, the former Emeline Wolfe.  The 61-year old Brady had a long and distinguished career by now.  He served in the Civil War and was promoted to brevet brigadier general just before its end.  He had served as consul to St. Thomas and was appointed by Ulysses S. Grant as second assistant Postmaster General in 1876.   By now he held the post of Building Commissioner and was president of the Board of Buildings.

Before the end of the month the couple held their first entertainment.  A newspaper reported "Mr. and Mrs. Thomas J. Brady gave a reception at their new residence, No. 42 West Seventy-fifth street, on Wednesday last."  The event was in celebration of their wedding anniversary and "also as a 'house warming.'  An orchestra provided music for dancing, and there was vocal music by Miss Mulligan and Miss McCormick."

On April 1, just two weeks after moving in, Brady retired.  At 6:00 on the evening of May 1 the doorbell rang.  On the stoop stood "a large delegation of the [Building Department] attaches."  The unexpected group pushed in, bringing with them "a rich silver tea service," as described by the Record & Guide.

"The service was spread upon a table in the parlor by several of the inspectors, and one of their number asked Mr. Brady to accept it as a token of the regard which the entire department staff bore toward their former chief."  In fact, more than 300 employees had contributed to the pricey gift.  Made by the Gorham Mfg. Co., it included a "large tray, with a tea kettle, coffee and tea pots, sugar bowl, cream pitcher and waste bowl."  Each of the pieces was decorated with Brady's monogram and the tray was inscribed with presentation details.

On February 28, 1904 the New York Herald reported that the Bradys had celebrated their 20th anniversary with a reception.  "The house was tastefully decorated.  One of the pleasant incidents of the evening was an address given by the Rev. Charles McCready, D. D. who married Mr. and Mrs. Brady twenty years ago."  It was perhaps the last entertainment by the Bradys.  Thomas Jefferson Brady died two months later on April 22.

No. 42 was sold in 1906, becoming the home of Dr. William Travis Gibb and his family.  He was born in 1862 and since 1891 had been examining physician for the Society for the Prevention of Cruelty to Children.  He was also an instructor in women's diseases at New York University from 1889 to 1899; and was appointed visiting surgeon at the Workhouse and at the City, Home and Pension Hospitals.

Most important was Gibb's work in children's and women's diseases; both of which received little attention.  He was among the first to recognize and speak out against sexual assault on children.  In 1894 he complained that doctors routinely diagnosed vaginal discharges in little girls as vaginitis--resulting in child predators going unreported.   When girls became infected with diseases like gonorrhea, their doctors were reticent to accept there had been sexual contact.  They developed the term "innocent" infection, attributing it to bad sanitation.  Gibb lobbied for the investigation into incest in such cases.

Gibb was honored on February 25, 1909 when the Gibb Operating Pavilion on Blackwell's Island was dedicated.  The state of the art facility included x-ray rooms, laboratories and a sterilizing room.

Dr. Gibb continued to advocate for women and children.  In February, 1910 a three-year-old boy was found wandering on Fulton Street and Broadway.  He was able to tell police that his name was Harry Hanley and that his father had left him and his six-year-old brother, Claude, on the streets several days earlier.  He did not know where Claude was.

Police tracked down the father, 32-year-old Frederick Hanley in Bayonne, New Jersey. The boys were from a previous marriage.  Hanley had married his current wife, Jennie, five months earlier.  He explained to the authorities that his "wages were small and that in addition his wife and he himself were frequently ill."  The New-York Tribune reported that both were arrested.

Dr. Gibb was called in to examine little Harry.  He "found marks on the boy's back, believed to have been inflicted with a strap, and his left eye is discolored," reported the Tribune.  "The police and agents of the [Children's Society] are now looking for Claude."

By the 1920's the Gibb children were growing up.  Newspaper articles describing the debutante fetes of the 1924-1925 mentioned that Frances attended several of the dances and receptions.

Alice Stearns Gibb died in 1924, the year Frances was graduated from the Spence School and Alice from the Cornell Medical College.  That winter season should have been festive, with France's introduction to society.  Her sister was determined that Frances would have her coming-out; and on April 14, 1925--noticeably late in the season and following the family's period of mourning--The New York Times reported "Miss Alice Gibb, daughter of Dr. W. Travis Gibb of 42 West Seventy-fifth Street, gave a luncheon yesterday at Pierre's to introduce her sister, Miss Frances Gibb.  A reception was held in advance of the luncheon."

Now a doctor, Alice followed closely in her father's footsteps.  She would go on to be on the staff of Elizabeth General Hospital and to sit on the board of the Family and Children's Society and the Visiting Nurse Association of Elizabeth.  William, Jr., too, pursued a medical career.  In 1925 he was enrolled in Cornell Medical School.

That summer Dr. William Gibb, his daughters and John Alexander went abroad.  It would be the last trip they took together as a family.  Five days before departing Dr. Gibb had announced the engagement of Alice to Dr. Henri Ernest Abel.  Alice and Henri had been classmates at Cornell Medical College.   A progressive female, Alice continued to use her maiden name following the wedding.

Frances's engagement to John Howard Neely, Jr. was announced on December 12, 1926.  The wedding took place in the 75th Street house on May 17, 1927.  The New York Times remarked "Spring flowers in shades of orchid and yellow combined with palms and ferns decorated the house."

By the time William, Jr. was married to Margaret B. Kies on October 4, 1930 he had become an attending physician at the Knickerbocker Hospital and a member of the staff of St. Luke's Hospital's outpatient unit.  His brother, John, served as his best man.

The following year, on October 3, the New York Sun reported that the Gibb estate had sold No. 42 to "a realty corporation."  Within the year a renovation resulted in the stoop being removed and the entrance lowered to the basement level.  There were now two apartments there, three on the parlor floor, two apartments and two furnished rooms on the second floor, and one apartment and three furnished rooms each on the upper floors.

The configuration remained, with some tweaking, until 1985 when another renovation created two apartments each on the lower three floors and a duplex above.  The removal of the stoop and the stained glass transoms are more than regrettable.  More than a century of grime gives the sadly abused structure a charred appearance, disguising the fascinating history of the families who once lived here.

photographs by the author
Posted by Tom Miller at 1:37 AM