The 1842 House That was Jack Delaney's Restaurant - 72 Grove Street 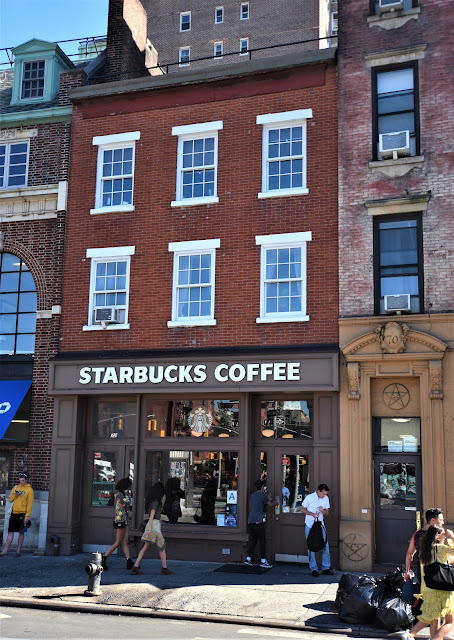 William Newhouse erected his substantial 21-foot wide home at No. 72 Grove Street in 1842.  As with almost all such projects, there was a secondary building--in this case a three-story house--in the rear yard.  Newhouse's three-story Greek Revival house was unpretentious; its brownstone lintels and sills and its simple fascia board below the cornice making no attempt at display.

The rear house was leased to a working class family.  On April 19, 1853 an advertisement in The New York Herald read: "A respectable Protestant young woman wishes to get a situation as chambermaid; is a fine washer and ironer; would be willing to do general housework...Please call at 72 Grove street in the rear."  Similar advertisements appeared over the next decade.

The Collins family was living in the main house in 1862 when tragedy struck.  The New York Herald reported on October 1 "Edward Collins, a boy about five years old, residing with his parents, at No. 72 Grove street, fell off the pier at the foot of Christopher street, yesterday, and was drowned."

It appears that the main residence was being operated as a boarding house by the end of the Civil War; and several families lived in the rear house.

Mrs. Rosaline Elliott had rooms in the main house when she became the victim of a burglar on March 9, 1869.  Thomas Smith was charged with "burglarously entering" her rooms and "stealing a quantity of clothing" after he was seen leaving the house by a pedestrian.   Smith seems to have gotten away with the crime, however.  The Evening Telegram reported on his trial of June 20, saying "One witness swore to the identity of the accused, but only saw him across the street.  The good character of the accused was established, and the jury rendered a verdict of not guilty without leaving their seats."


In the meantime an Irish immigrant family--the widowed Mary McKenna and her grown children, Owen and Bridget--were living in the rear house.  On May 8, 1868 Mary, who was just 58 years old, died there after what The New York Herald called "a lingering illness."  Her modest funeral was held in the little house two days later.

By the early 1870's the basement of the main house, now apparently owned by John Campbell, had been converted for business.  The stoop was moved to accommodate the traffic to the the saloon there.  Campbell's family occupied the upper floors.  On March 8, 1872 John's widowed mother, Jannett, died at the age of 70.  Her funeral was held in the house on March 11.

It is unclear whether John Michel and his wife rents rooms in the main or the back house at the time.  He was looking for employment that year and his advertisement suggests the agrarian-trained man had recently arrived from Europe.  "Gardener's and Farmer's Situation Wanted--by a practical married man (German); understands his business fully; greenhouses, graperies, vegetables and the management of stock and general farming."


Bridgett and Owen McKenna had remained in the rear house following their mother's death.  Now on February 24, 1873 Bridgett died "after a long illness."  She was just 28 years old.  (It is possible that both Mary and Bridgett had succumbed to the smallpox epidemic which first arrived in New York in 1868 and lasted through 1875.)  As the anniversary of Bridgett's death approached, it may have been too much for her brother.  His death notice reported that he died "suddenly" on "Sunday evening, February 1...aged 32 years and 13 days."   The New York Herald was more explicit.  "The body of Owen McKenna, native of Ireland, thirty-two years of age, was yesterday found floating in the dock foot of Leroy street, North River, and removed to his late residence in the rear of No. 72 Grove street, where Coroner Kessler will hold an inquest."

A tenant, 23-year-old Andrew Hamilton, got himself in trouble with the law for his rowdiness in June 1881.  He and a group of young men and women crossed the river every week to attend a Saturday night dance at a certain Hoboken pleasure garden.  On June 13 The New York Herald noted "the termination of the dancing is, as a rule, the signal for the outbreak of a series of fights."  As the "party of revelers" headed to the ferry, they were met by Officer Flaherty who ordered them to keep quiet and go home peaceably.  "But they turned upon him and he arrested one of the crowd," reported The Herald.  "With the assistance of Officer Crush two others were taken, and at the police station charges of disorderly conduct and resisting an officer were preferred against them.”  Among the arrested was Andrew Hamilton.

It did not go well for the young men.  Determined to end "these Sunday morning quarrels," the court imposed a fine of $20 each--just over $500 today.  Unable to pay the fine the men were sent to the Penitentiary for three months.

Following the turn of the century the former saloon became the shop of chair maker H. B. Foster.  His son, Edward, was good friends with a rookie police officer, Bruce Manson, appointed to the force on July 2, 1908.  That friendship would result in Foster's enduring a frightening incident in 1910.


That spring the Secret Service offices in Washington and in New York received a series of peculiar, anonymous letters that warned that Manhattan's street posts, fire alarm boxes and mail boxes were painted in treacherous colors.  The New York Call later explained "The red meant danger and black was the color of death, the writer said.  He wished the boxes and posts be removed and the dangerous colors changed."

The letters were traced to Officer Manson.  He was retired in May on a doctor's certification and committed to an asylum in Central Islip.   Five months later, on October 19, The New York Call ran a headline that read "Crazy Ex-Policeman Escapes From Asylum" and reported that when H. B. Foster answered a knock on the door "Manson staggered to a seat.  His clothes were torn and he was covered with dust."  He had walked all the way from Islip after, according to him, he "just walked out."

Foster remained calm, put the escapee to bed, then called for a policeman.  He was taken to Bellevue Hospital with little commotion.

No. 72 received an alteration in 1921 that converted the ground floor to a commercial space.  By the beginning of the Great Depression it housed The Village Grove Restaurant, operated by S & C Restaurant, Inc.  In 1932 it renewed the lease for 10 years, with a starting rent of $3,300 per year, gradually increasing to $3,900 (about $6,000 a month today).

In 1936 the building was leased by Jack Delaney.  After making renovations he opened Jack Delaney's Restaurant.  It became a popular destination specializing in steaks.  Delaney was a horse breeder and the main dining room was decorated with horse racing photographs and memorabilia.  The barstools were fashioned from English saddles and hanging from the ceiling was a sulky cart.

Lunch cost 50 cents in 1939; around $9.00 in today's money.  Greenwich Village was ground zero for writers, poets and musicians, resulting in the restaurant appearing in literature throughout the coming decades.

I was reflecting the other night meaning
I was being reflected upon that Sheridan Square
is remarkably beautiful, sitting in Jack
Delaney's looking out the big race-track window
on the wet
drinking a cognac while Edwin
read my new poem...

And in his 1968 Vanity of Duluoz: An Adventurous Education, 1935-46 Jack Kerouac recalled his father taking him downtown in 1939: "So we go down to Jack Delaney's steak restaurant on Sheridan Square, myself little knowing how much time I was destined to spend around that square, in Greenwich Village, in darker years, but tenderer years to come."

Jack Teitelbaum, who went by the name of Jack Lane, played piano during the "cocktail" hours.  Lane, who lived just a block away at No. 95 Christopher Street, had been a vaudeville director in his early career.  He had also composed popular songs and musical scores for silent movies.  After three decades at Jack Delaney's, he died on January 20, 1964.

Two years later, on January 14, 1966, Jack Delaney died at the age of 65.  If New Yorkers were concerned that his death would signal the end of the restaurant, it was not to be--not yet at any rate.

On March 12, 1973 New York Magazine wrote "The favorite Village pianists are here.  Mon. and Tues. it's Charles DeForest, and the rest of the week it's Murray Grand.  There's no tune you can ask for that one of them won't know."  And a year later, on October 21, The New York Times remarked on a new pianist, Phil Della Penna, calling him "a genial man who looks like an English Lit. prof." 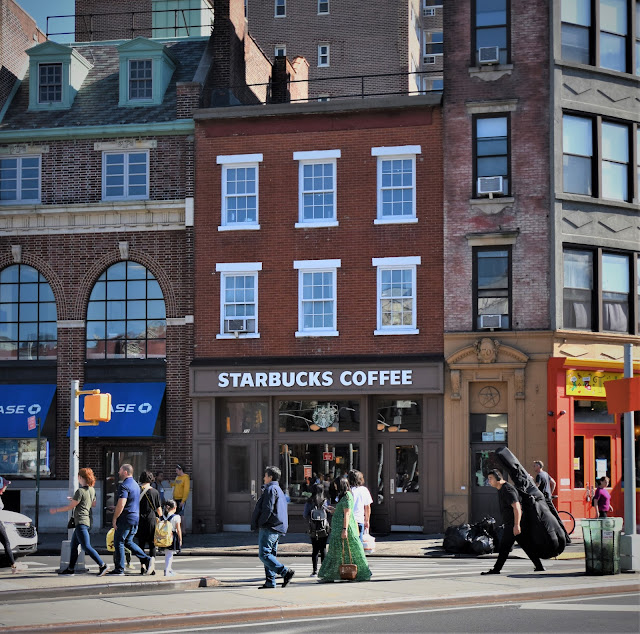 By 1990, however, the venerable restaurant and nightclub was gone, replaced by the Sheridan Square Restaurant, a diner that lasted for many years.  Today the ground floor houses a Starbucks.  The unassuming little building reveals no hint of its rich history and the importance it played in 20th century Greenwich Village.

photographs by the author
Posted by Tom Miller at 2:04 AM