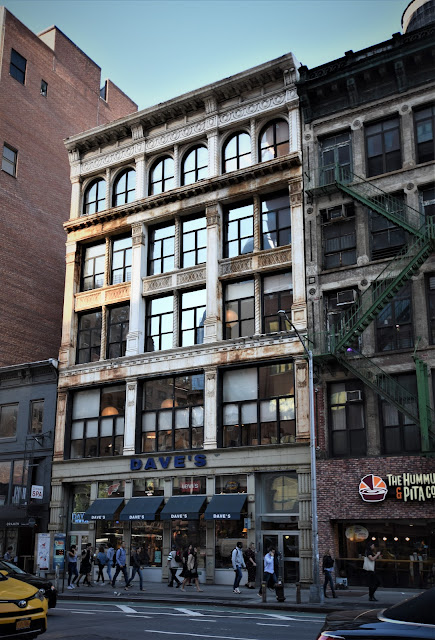 In the first years following the end of the Civil War John H. Dresler operated his substantial bakery from the converted house at No. 261 Sixth Avenue.  The bakery was conveniently located only about three blocks from No. 119 West 13th Street where Dresler and his wife, Sophia, lived comfortably with their daughters.

The scope of his business was evidenced in the spring of 1874 when thousands of poor New Yorkers faced literal starvation following the onslaught of the Financial Panic of 1873.  Soup kitchens were opened, clothing drives were initiated and donations of money were petitioned by newspapers.  Local police precincts ran certain soup kitchens and on March 13 Captain John H. McCullough of the 29th Precinct announced that John Dresler had donated 80 loaves of bread.

The avenue saw the rise of lavish dry goods and department stores in the third quarter of the century.  Dresler responded by demolishing the old house and the one next door at No. 259 and commissioning architect John E. Terhune to erect a modern commercial building on the site.  His plans, filed on April 3, 1891, called for a "five-story iron and glass store" to cost $40,000--or about $1.14 million today.

Completed in 1892, Terhune had designed a striking cast iron front that allowed for vast expanses of glass.  Unusual hefty banded piers flanked the ground floor.  The pilasters of the second floor were decorated with blank shields and delicate ribbons.  Between the two-story pilasters of the third and fourth floors, twisted single-height engaged columns separated the paired openings.  The spandrel panels between the floors were decorated with elaborate Moorish designs.  Above a projecting cornice, the fifth floor carried on the motif of twisted columns, its arched windows creating rhythm to the design.

The dry goods firm Hill & Co. leased the building; however Dresler seems to have been reticent to entirely move his bakery from the location.  On February 27, 1892 the Real Estate Record & Builders' Guide reported that he had hired B. F. King to install "two bakers' ovens."  The coexistence of the upscale store and the bakery does not seem to have survived long.

The year after Hill & Co. moved in another economic downturn, the Financial Panic of 1893, hit.    On September 22, 1893 The Evening World reported "Although times may be hard, Hill & Co., of 259 and 261 Sixth avenue, seem to have decided that women will wear just as pretty hats and buy as many as ever before, for seldom have there been such fine displays as at the opening this year."  The article mentioned that even the women who did not intend to buy a new hat dropped in just to see what was new--"many of the most fashionable visited the popular house to at least learn what the styles for the season will be."

The Ladies' Mile saw a change in shopping trends as dry goods stores--which traditionally sold clothing, accessories and linens--branched out, adding departments for unrelated items like furniture, housewares and shoes.  Hill & Co. joined the department store trend in the fall of 1894, introducing a "carpet and curtain department."  The store kicked it off with an aggressive advertisement in The Evening World on October 15:

We are 25% cheaper than any other carpet house in the country.  It will pay you to call and examine the new carpet and curtain department of Hill & Co.

In 1900 Hecht Bros. department store took over the building.  Run by brothers Meyer and Bernard Hecht, the store continued to buck retailing tradition along Sixth Avenue by offering mens' and boyswear.  Gentlemen's outfitters had for years lined Broadway near Union Square, while Sixth Avenue catered to the feminine shopper.  Hecht Bros. offered both men's and women's fashions.  And they offered payment plans, as well.

The Brooklyn Daily Eagle reported "The first surprise was the opening of a large establishment entirely devoted to specializing outer and under apparel for every member of the family and extending the privileges of credit to every patron."

An advertisement in The World on November 8, 1901 explained "We not only provide clothing of the dressiest character for the entire family at astonishingly low prices, but we offer you the advantages of our charge system, which permits of small, convenient payments."  The payments were, no doubt, necessary for some patrons.  A "high-class suit" of "splendid fabrics" listed in that advertisement was priced at the equivalent of $762 today.

Hecht Bros. remained in the building until 1907 when John Dresler's daughters, Sophia and Emma, took it in a different direction.  By now the grand emporiums of the Ladies' Mile had moved northward.  In response the women hired architect H. W. Cotthaus to make what the Record & Guide described as "extensive alterations to the department store."  The New York Herald announced on September 11 that Cotthaus's plans called for "making over the fire story department store Nos. 259 and 261 Sixth avenue...into a studio and office building with sales rooms on the ground floor."

The renovated building became home to Miles Bros., motion picture makers and outfitters of motion picture theaters.  Bachelor brothers Harry J. and Herbert L. Miles not only provided films, but the equipment on which to screen them.  The Sun remarked "The firm is well known in the moving picture trade throughout the country.  The brothers came here from San Francisco."

In 1907 they marketed their Picturephone, an early attempt at talking pictures.  An advertisement that year touted "Here It Is!  Singing and Talking Moving Pictures."

The Picturephone, which cost a significant $15,200 in today's dollars, came "complete with especially wired Phonograph."  An advertisement explained:

Remember, this marvelous instrument is sold under the guarantee of our firm that it is the greatest possible added attraction to any Moving Picture or Vaudeville Theatre.  The moving pictures, acting in harmonious conjunction with a perfect synchronizing apparatus...gives a complete performance of solos, dialogues, duets, concerts, operas and dramas.

Despite the firm's success and renown, Harry J. Miles suffered depression--possibly because of his diagnosis with epilepsy in the fall of 1907.  He and Herbert lived in an apartment on the seventh floor of the Concord Hall apartment building on Riverside Drive at 119th Street.  At 10:30 p.m. on New Year's Day, 1908, the 40-year-old said goodnight to his brother and went to his room.  An hour later John Noyes, a hall boy, heard a crash in the inner courtyard. Harry had jumped to his death from his window.   Herbert continued running Miles Bros. at least through 1916.

Another set of brothers, Jacob and Samuel Liberman leased the store in November 1910.  Lieberman Bros., clothiers, ignored the flight of other dry goods firms from the district.

Sixth Avenue was renumbered in 1926, giving the building its new address of Nos. 581-583.  The most notable tenant in the upper floors came in 1932 when Walter Quirt leased two floors of the building.  Quirt was the secretary of the National Students League, founded a year earlier.   Renovations resulted in a workshop, gallery and meeting space.  Although the League staged exhibitions in the gallery space, its agenda went far beyond art. 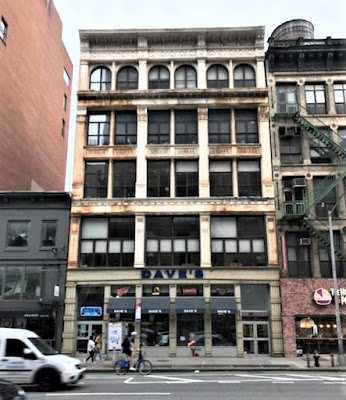 In 1934 The Examiner called it "an organization of radical writers and artists," and "a Communist students' organization."  The publication noted it "has sympathizers at 129 American colleges."  In his 1997 book Student Politics in America: A Historical Analysis, historian Philip G. Altbach writes "From its beginning, the NSL was controlled by the Communists and echoed Communist policy on both campus and national issues, although it never openly acknowledged its Communist leadership."

The National Students League staged protests and demonstrations, aired radio shows and held meetings in its Sixth Avenue space.  Among its demands in 1934 were "1. Lower tuition fees, a free college in every city, 2. Academic freedom for all students and instructors, and 3. Abolition of all forms of compulsory religion services in college" among other goals.

In May 1933 what the Daily Worker described as a "mass memorial meeting" for Japanese Communist Takiji Kobayashi was held here.    A leading force in the Communist community in Japan, he was a writer, lecturer and organizer.  Arrested in May and August 1930, he was tortured by the Imperial Police.   After being tortured again after a subsequent arrest in February 1933, he was brutally murdered by the Imperial Police.

Early in 1934 the National Students League moved to 14th Street.  The building was sold in 1938 and by 1941 the ground floor was once again a furniture store, Forman's.  The tradition was continued in the 1980's and '90's when Furniture Gallery was a neighborhood fixture.


At the time Bob Giraldi Productions operated from an upper floor office.  It was renamed Giraldo / Suarez Productions sometime around 1994. 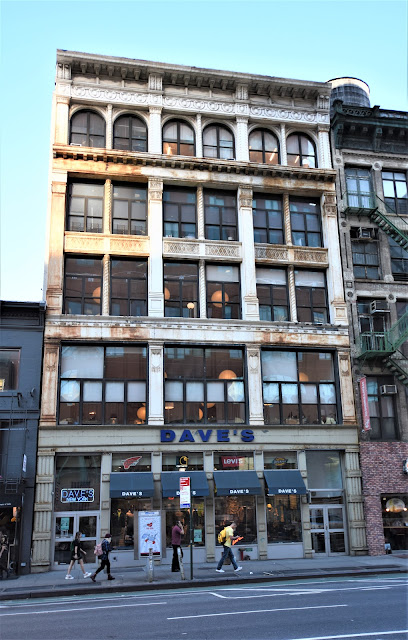 Today a casual clothing store operates from street level.  The more than 125-year old cast iron facade is stained with rust--a condition that could be rectified by a coat of paint.  Despite the neglect, the Hill & Co. dry goods store retains its 1892 dignity.