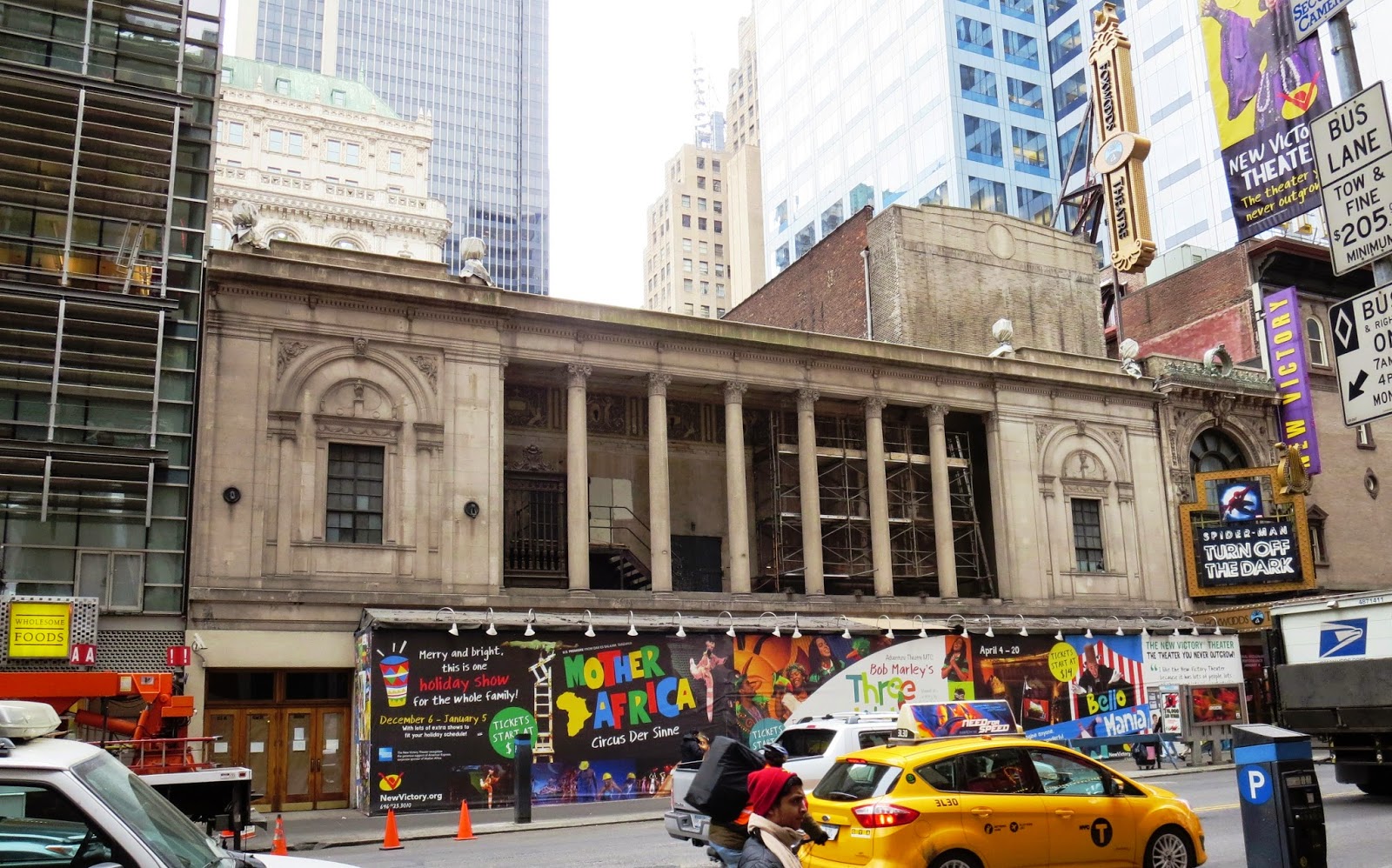 By the time that World War I erupted in Europe, the theater district had essentially left 23rd Street and relocated around Longacre Square; recently renamed Times Square.  On June 22, 1919 The New York Times reported on the coming of two more theaters.

“The two new houses now in course of construction are to be known as the Times Square and the Forty-second Street.  They are to be located on the north side of West Forty-second Street, adjoining the Lyric Theatre and directly across the street from the New Amsterdam Theatre.”

Brothers Edgar and Archibald Selwyn had founded the theatrical production company The Selwyns.  Their two new theaters would be unusual in that they would appear to be a single structure.  The Selwyns had commissioned architects De Rose & Persira to design their theaters, with George L. Keister acting as consulting architect.  The completed structure would resemble a colonnaded 18th century English "terrace" with a rusticated granite base supporting a grand classically-inspired loggia.

The Times remarked “The new structures represent the last word in theatres.  Each contains numerous innovations.  Perhaps the most important improvement to be noted in connection with the new building will be what in effect amounts to air cushions built on the street sides.  The result will be to render the auditoriums practically soundproof.”

The theaters would share a large marquee, adding to the illusion of a single structure.  The Times Square, entered at the right, had a seating capacity of 1,200 while the Forty-Second Street Theatre (quickly renamed The Apollo) could seat 1,100.

The construction of the theaters was a major undertaking.  “The negotiations leading to the purchase of the property and the erection of the theatres, which involves an investment of close to two million dollars…is one of the largest theatrical enterprises undertaken in the city in several years,” said The Times.

A month before The Times article, the Real Estate Record & Builders’ Guide had reported that construction had been resumed after being “halted by the war.”  “It is hoped to have them completed and ready for occupancy by the opening of the autumn theatrical season.”

The Apollo opened on November 17, 1920 with “the youthful” Oscar Hammerstein’s musical comedy, Jimmie.  The New York Times noted “The Apollo will be devoted exclusively to musical shows.”

“There is a story about a homeless waif defrauded of her inheritance,” said the newspaper of Jimmie. “To say nothing of the girls.”

Despite the assertion that only musical shows would play here, the following year Lionel Barrymore opened in MacBeth.  Like Jimmie, it was not well received.  In 1922 the Selwyn’s staged the first of a few plays with mostly black actors.  Sidney Bechet and Alberta Hunter appeared in How Come.

In the meantime the Selwyns had scored a coup when they enticed Florence Reed to leave her producer and open The Times Square on October 5, 1920 in The Mirage.  "Edgar Selwyn has evolved a play which he believes to be suited to Miss Reed, and since he is one of the producers in the case it would not be surprising to find this the piece in which Miss Reed opens the Times Square,” announced The Times on Jun 13, 1920.

Channing Pollack’s The Fool opened at the Times Square Theater on October 23, 1922.  One young actress, Sara Sothern was deemed by Theatre magazine to be “outstandingly fine” while judging the rest of the cast to be “creditable but not startling.”  The 27-year old starlet would eventually be forgotten for anything other than being mother to Elizabeth Taylor.

Andre Charlot’s Revue of 1924 opened on January 9 “With three of the most popular London revue comedians as its starts,” said The New York Times.  Called “Frequently brilliant in idea and thoroughly English,” it starred Beatrice Lillie and Gertrude Lawrence.

The Selwyns took a chance when they opened The God of Vengeance next door at the Apollo on February 19, 1923.  As John H. Houchin points out in his Censorship of the American Theatre in the Twentieth Century, “The God of Vengeance contained more than enough provocation for censors.  Aside from the theme of homoerotic love, it dealt with prostitution, took place in a brothel, and clearly implied…that the respectable ‘upstairs’ was supported by the sordid ‘downstairs.’”

Critics called the play sickening and it quickly garnered the attention of authorities.  On March 7, 1923 The Times reported “Two managers and twelve members of the cast of the tragedy, ‘God of Vengeance,’ now being presented at the Apollo Theatre in West Forty-second Street, were indicted yesterday for violating the penal code in giving an alleged indecent, immoral and impure theatrical performance.”

It took jurors only 90 minutes to convict the players.  Before releasing the defendants on $300 bail, Judge McIntyre said he was pleased with the verdict which would have a “wholesome effect on the theatrical profession.”  He added it “the time had come when the drama must be purified.”

The Apollo Theatre got back to presenting lighter fare and in 1924 opened George White’s Scandals.  White had danced in Florenz Ziegfeld’s Follies before producing his own revues in 1919.  The Scandals would feature scores of box office draws like Ann Pennington, comedians Willie and Eugene Howard and Harry Richman, dancer Ray Bolger, and Ed Wynn.

On August 4, 1924 a woman in the audience of Scandals left her seat to get a drink of water.  Unfortunately, she was unaware of the difference between a paper cup dispenser and a fire alarm box.  The Times reported the following day that “In a few minutes West Forty-third Street, in the rear of the theatre, was jammed with fire apparatus and curious crowds.”

Theater attendant Katie Lorenson explained “The woman broke open the door of the fire-alarm box and turned the hook.  I met her as she and two other women were returning to their seats upstairs.  She said: ‘I was thirsty and I thought that red thing in there was the cover of an apparatus which would release a drinking cup.  When I turned it, one of my friends here told me that I had sent in a fire alarm.  Don’t tell anybody until I get back in my seat.’”

Astonishingly, Deputy Fire Chief Ross “viewed the 1,500 spectators at the show through a hole in the scenery and satisfied himself that they had not paid the slightest attention to the clanging of the gongs of the fire apparatus as it drove up to the stage entrance.”

The Depression years hit Broadway hard and theater owners scrambled to draw customers.  In 1934 the owner of The Apollo, Max R. Wilner and his Okaybud Corporation, filed for a license to operate the theater as a burlesque house.  Commissioner Paul Moss refused the request.  Moss testified “that the type of show given by Wilner at the Irving Place Theatre, which he expected would be offered at the Apollo, is ‘raw.’”

Wilner appealed and Supreme Court Justice Koch reversed Moss’s decision.  It was the end of legitimate theater at the Apollo.  But in 1937 Mayor Fiorello LaGuardia put an end to all burlesque licenses and the last burlesque show at the Apollo was in November that year.  The following year the Apollo Theatre screened motion pictures only.

The conversion of the Apollo to a movie theater followed the lead of the Times Square Theatre three years earlier.  On April 13, 1934 The Times had reported “A five-year lease has just been signed whereby Harry and William Brandt will show continuous movies here; in the house that in recent years held Noel Coward’s ‘Private Lives’ and “Clear All Wires.’  This season, however, it has remained dark.”

The conversion was not without its troubles.   In 1935 disgruntled members of the Allied Motion Picture Operators Union picketed movie houses and on August 15 they chose the Times Square.  Before the night was over 17 pickets were arrested--15 charged with disorderly conduct, one with assault and another with interfering with an arresting officer.

In October 1936 the theater was a target again when, with nearly all the 1,100 seats filled, there was a loud explosion near the orchestra.  “Members of the audience said afterward that it sounded like a pistol shot, and many thought there had been a shooting.  Word passed around that some one had attempted suicide, and most of the spectators, curious to learn what had happened, kept their seats,” said The Times on October 11.

And then the smell came.  The explosion was a home-made tear gas bomb that sent the patrons rushing into the street.  “Tears were streaming from the eyes of men and women, and others, who had left hats, coats and other belongings inside, were undecided whether to brave the fumes to retrieve their belongings or remain in the fresh air.”

In reporting the incident, The Times called the Times Square Theatre “a second-run motion picture house.”

The Apollo Theatre avoided similar labor troubles by screening mostly foreign films.  Movies like the Russian drama Lenin in October played in July 1938; and the French film Thunder Over Paris starring Erich Von Stroheim premiered June 27, 1940.  Russian films were a favorite here.  The foreign productions with their English subtitles brought in an unexpected audience.  Variety noted on May 7, 1947 that The Apollo had become a favorite for the deaf.  The subtitles made movie-going enjoyable those who relied on them to follow the plot.

The 42nd Street area around Times Square became crime-ridden and sleazy in the second half of the 20th century.  The Times Square Theatre, once filled with patrons in evening clothes, was repeatedly robbed at gun point throughout the 1950s.  The Apollo was briefly used as a night club in the 1970s; but that effort, too, failed.

The elegant classical-fronted theaters sat empty and neglected; and was finally condemned.  In 1990 the City and State reclaimed the property and in 1992 was given “protection” by the New 42nd Street organization.  The interiors of the Apollo were gutted to become part of the often renamed Ford Center for the Performing Arts; the Hilton; the Foxwoods Theatre; and finally in 2014 the Lyric Theatre. 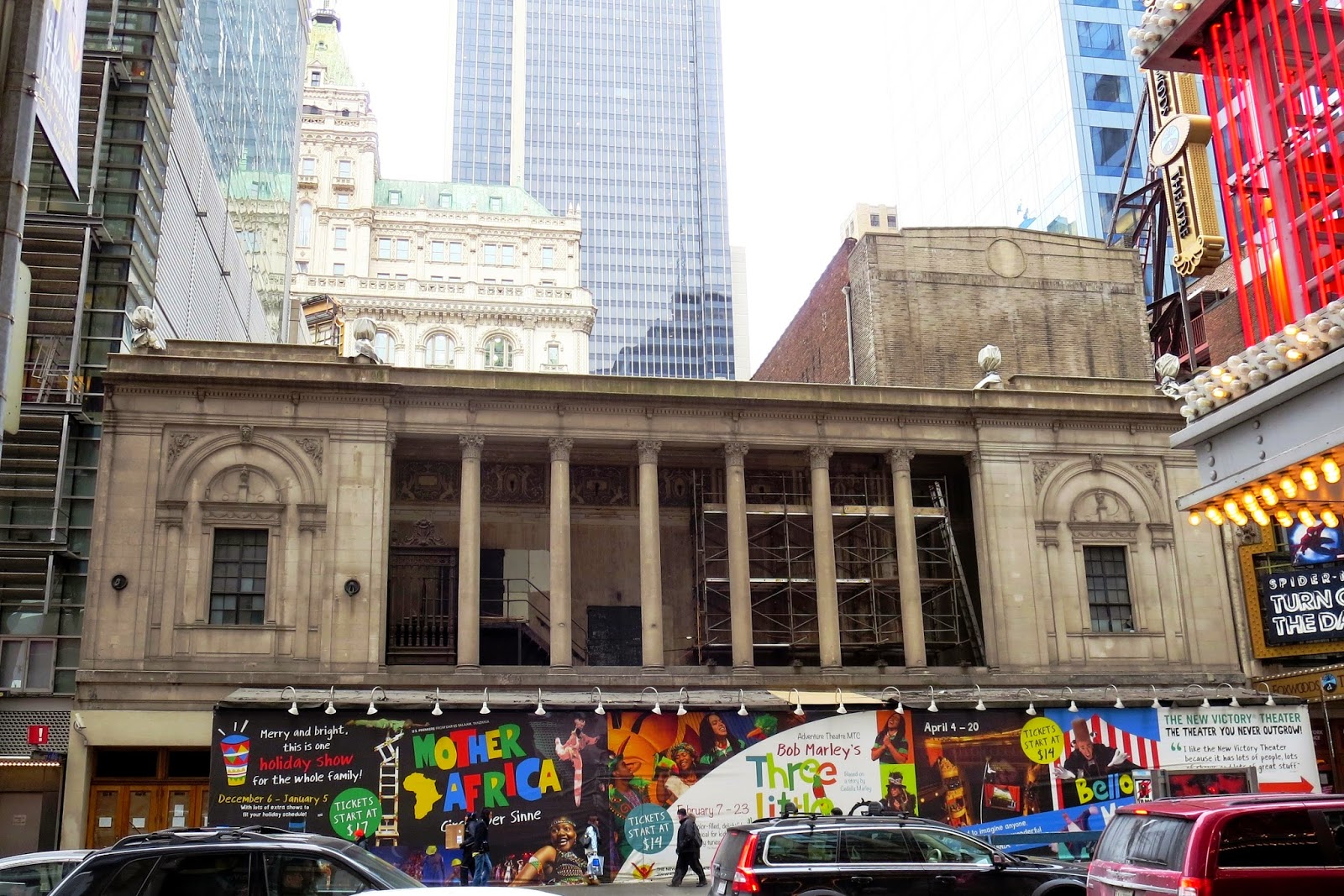 non-credited photographs taken by the author
many thanks so Sean Khorsandi for suggesting this post
Posted by Tom Miller at 2:39 AM