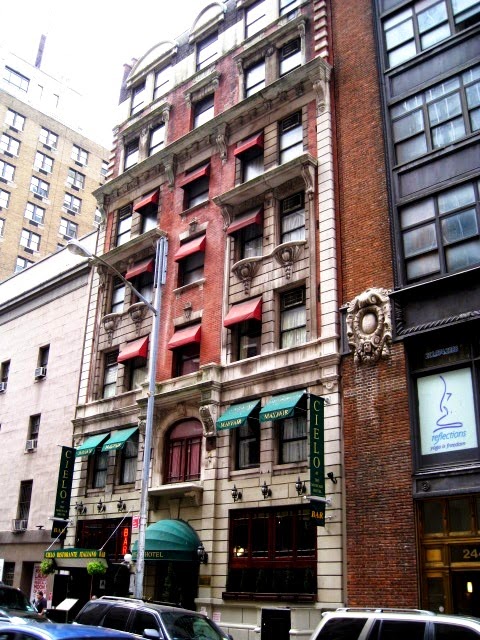 By the turn of the last century the entertainment district had been gaining a foothold in the Times Square area for seven years—since Charles Frohman built his Empire Theater at Broadway and 41st Street in 1893.  In 1901 the flurry of real estate activity in the area was dizzying as developers and investors with plans for theaters, hotels and apartment buildings in mind purchased old buildings

On March 8, 1901 alone The New York Times reported on real estate deals involving Nos. 10 through 14 West 44th Street, Nos. 215 through 221 West 40th Street, and Nos. 240 and 242 West 49th Street.  The 49th Street properties were two “three-story brownstone-front dwellings” sold by John Totten and Marcella O’Neil.  They were purchased by the City Mortgage Company.  The end of the line for the 20-foot wide houses was on the near horizon.

Before the year was out the homes were gone, replaced by what The New York Times called a “seven-story brick flat.”  The brick and limestone apartment building boasted all the Beaux Arts bells and whistles found in moderate to upscale residence hotels at the time.  Carved French ornamentation and delicate balconies distinguished the “flats” from a tenement.

The investors, apparently, gambled too heavily on the project, for only months after its completion it was sold at a foreclosure auction.  N. D. Stillwell purchased the building on Wednesday, June 25, 1902 for $85,002—around $2.25 million today.

Known as The Gotham, the building initially drew respectable residents.  In 1905 real estate developer Clarence L. Sefert lived here while he made plans for a 6-story, 35-family flat on Manhattan Avenue in Harlem.  But before long a more nefarious element would infiltrate the Gotham.

In the fall of 1911 the Police Commissioner received a letter that began “This of necessity must be anonymous.”  The writer complained about the opium dens operating around Times Square and the corrupt police who enabled the activity.  His letter added:

And while we are on the subject why are placed like the White House, The Gotham and the one near Churchill’s allowed to exist?  They all violate the excise law.  After seeing the fairyes flit in and out it wouldn’t take an Anthony Comstock to understand the nature of the house.”

Within two years the name was changed to the Hotel Van Courtlandt, although it still offered apartments for long-term residents.  The New York Hotel Record reported on September 30, 1913 that E. R. Hart, a veteran of three hotels, had been hired as room clerk here.

As Winn headed along Central Avenue, one of the women decided she wanted to drive and tried to grasp the steering wheel.  Winn struggled for control of the car and, according to witnesses “The car served so sharply that both the wheels on the right side collapsed against the curb, and all the occupants of the car were thrown out.”  The New York Times reported that Lee suffered a broken right leg, Celia Jackson’s arm was broken, and Delia Bates suffered “from shock and bruises.”

Operating the building as a hotel did not work out and when it was leased to Hugo J. Hunt on May 8, 1915 the Record & Guide again called it the “Gotham, a 7-story apartment house.”  Just a year earlier, on July 20, 1914, one apartment in the building was raided by vice detectives who suspected prostitution.

A detective named Chultz later testified about his visit to the “disorderly house” in court.  He described the parlor and the women lounging there.  He was served wine, then ushered into a bedroom where a woman named Camille met him.

“We entered the bedroom, and she took this kimono off, or night gown, and asked me how long I wanted to stay.  I said, ‘For a short time.’  She said, ‘A short time is $10.’  I then placed her under arrest.”

Camille’s attorney argued that there was “no proof that the defendant had any knowledge that the apartment was conducted as a house of prostitution.”  Rather surprisingly, the judge ordered a new trial.

Considering its location, it is not surprising that by 1920 the Gotham was attracting residents in the theatrical field.  Motion picture actor Stephen Grattan lived here in 1920.  He had already played in movies like the Fox productions of The Ruling Passion, The Spider and the Fly, A Tortured Heart and Should a Mother Tell; and a role for Brennan Selznick in The Lone Wolf.   Also living here that year was Laura Baresch, whom the Evening Public Ledger of Philadelphia described as a “pretty New York model or chorus girl" (for there was some uncertainty as to which she was).  The uncertainty regarding Laura’s profession was the result of her sudden attack of amnesia on March 2, 1920.

She was shopping on Chestnut Street in Philadelphia when “she felt faint and her head ‘went queer.”  She told police that she couldn’t remember where she was going or what she had intended to do.  The newspaper seemed to be more interested in Laura’s physical charms than her medical condition.

“Her brown bobbed hair, dark eyes and piquant face, as well as the temporary amnesia that caused her to be taken to Hahnemann Hospital, made Miss Laura Baresch a person of interest there today,” said the reporter.  By the following day, Laura’s memory was improving.  A card in her purse gave her address at 242 West 49th Street and she remembered that she had relatives in New Jersey.

Violet Lorring was another resident.  She was 22 years old in 1921 and described herself as a vaudeville actress.  Violet’s theatrical income was not sufficient, it would seem, to keep her in the style she aspired to.  But Helen Shipman, a musical comedy headliner, was doing quite well for herself.  She had a suite on the fourth floor of the Hotel Thoradyke and the wardrobe of a star.

Some of that wardrobe went missing after Helen’s rooms were looted on October 8.  She reported that her $4,000 mink coat, $400 squirrel coat and a $600 pearl necklace were stolen.  Then, on Tuesday November 15 vaudeville comedian Sam LeMaire “became an accidental detective in the case,” according to the New-York Tribune.  He noticed Violet Lorring walking with a female companion on the street and wearing a fur coat.  He followed her for 15 minutes until he was convinced it was Helen Shipman’s missing coat.

LeMaire brought it to the attention of two detectives, who took Violet and her friend to Helen’s suite.  “Brought face to face with her accuser at the hotel, Miss Lorring was obliged to admit that the mink coat wasn’t hers.  The girl who accompanied her, Miss Shipman says, was wearing the collar and cuffs of the squirrel coat, which she said Miss Lorring had given to her.”

To make matters worse for Violet, the pearl necklace was found in her apartment in the Gotham.  Despite the overwhelming evidence against her, she pleaded not guilty to the charge of burglary.

Another showgirl who landed in the newspapers was Clara, a “blond, and of Scandinavian descent,” according to The Pittsburgh Press on June 19, 1921.  The woman with the unknown last name would flee to Minnesota when she found herself involved in an ugly divorce case.’

Florence Leeds, described by the same newspaper as “the former Century Roof beauty” had began a romance with the already-married banker James A. Stillman several years earlier while she was still a chorus girl.  Their fling grew to the point that Stillman and Florence lived together.

Florence became incensed when, during the divorce proceedings imitated by Mrs. Stillman, “a woman high in society,” it was revealed that Stillman had another girlfriend on the side—Clara.  Thinking herself the sole object of the banker’s attentions, Florence flew into a fury.

“Inflamed with jealousy, it is reported, Mrs. Leeds now is bitterly anxious to do all in her power against the man with whom she is said to have lived for years,” said The Pittsburgh Press.  It added “The former chorus girl is said to be determined that Stillman shall be made to pay in full for his alleged philandering.”

The defense was happy to have Florence Leeds on its side and would have liked to find Clara as well.  The charges against the cheating millionaire seemed, nevertheless, to be obvious.  “It is known that if they appear they will be but two of 50 or more witnesses for the defense,” said the newspaper.

When he was put on the stand on June 29, 1921 James Stillman refused to answer questions—including “Were you ever at 242 West Forty-ninth Street?”

In July 1922 the Gotham was sold for $180,000 to an Oscar B. Pipes.  The New York Times mentioned that “It contains twenty-one apartments and yields an aggregate rental of $55,000 per annum.”  One of the selling features was the building’s elevator.

The Gotham would never be a truly respectable address.  Forty-year old Irving Becker lived here in May 1937 when he was arrested as part a “hold-up gang” and charged with assault and robbery.  It was Becker’s fifth arrest.

Twenty years later former model Judith Morgan lived here.  Several years earlier she had brought a $1.5 million suit against the city and four psychiatrists, saying that she had been mistreated at Bellevue Hospital.  Judge Edward Weinfeld dismissed her case.

Now, on May 13, 1957, Morgan’s anger against the judge reached the breaking point.  She took a 12-inch carving knife from her room and went looking for Weinfeld.  When she found him on the Lower East Side, she plunged the knife into his back crying “You ruined my life!”

In fact, her victim was Sam Smith, a 57-year old garment salesman who happened to live in the same building as Judge Weinfeld.  Police tracked the middle-aged woman to her apartment in the Gotham.  She told the detectives, “I’m sorry I hit the wrong man.”

She was charged with felonious assault.

By 1960 the Gotham was renamed the Mayfair Hotel.  Pat Rodgers, a 27-year old showgirl, was found dead in her room here on April 23 that year. 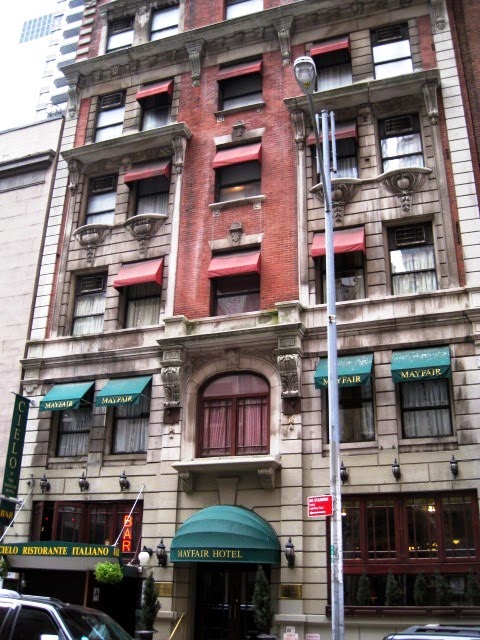 Today, still called the Mayfair Hotel, the building has received a bit of a brushing up.  Called by Travelweekly.com a “European-style boutique hotel,” its renovated rooms and lobby disguise its somewhat seedy past.  The façade has lost its balcony railings and decorative urns; yet it survives surprisingly intact; and its history, now forgotten, is colorful at best.