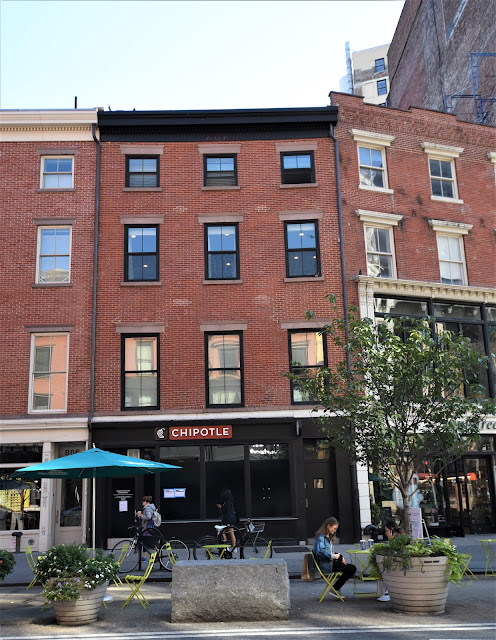 In 1806, anticipating the need for a branch bank north of the city, the Manhattan Bank Company purchased a rural plot of land, one acre square, from Edward Williams.   Facing Broadway at the southeast corner of what would become 17th Street, the land would remain vacant for decades.
By the 1830's the expansion of the city was nearing the area.  Another banker, Samuel Ruggles, spearheaded the creation of Union Square in 1832; intended to be an exclusive enclave of upscale homes surrounding a tranquil fenced garden with a central fountain.   Following the park's completion in 1842 the surrounding lots filled with handsome residences of moneyed families. The Manhattan Bank Company began construction of four speculative brick-faced homes in 1847.  Completed the following year, the Greek Revival style houses were an ample 25-feet wide and four stories tall.

No. 864 was briefly occupied by Nathaniel Marsh, secretary of the New York and Erie Railroad Co.  Then in 1849 it was sold to Navy Commander Theodorus Bailey (who sometimes used the name Theodore) and his wife, the former Sarah Ann Platt.  The couple had four children, Anna P., Sarah R., Margaret S. and Edmund S. Bailey.

Theodorus Bailey had entered the U. S. Navy in 1818 at the age of 12.  Most recently he had seen action in the Mexican-American War, commanding the sloop Lexington from 1846 through 1848.  That year he was given a leave of absence during which time (the same year he purchased the Broadway house) he was promoted to commander.

The Bailey family's residency would be relatively short.  In 1852 city directories listed "Theodore Bailey, U.S.N." as occupying the house; but it would be his last listing here.  The following year he received orders to command the warship St. Mary's, currently being repaired at Philadelphia.  It appears that the entire Bailey family left the house at this time.

Theodorus Bailey's distinction throughout the Civil War, incidentally, earned him the rank of rear admiral in 1866.  He died in Washington D.C. in 1877.

In the meantime the Bailey family leased the house, which quickly became a boarding house.  In December 1853 an advertisement appeared in The New York Herald reading:

Furnished Rooms, on the European Plan, at 864 Broadway, two doors above Union Square--A parlor and bedroom, handsomely furnished, on the second floor; also one large room on the first floor.  The house contains all the modern improvements.

Commercialization of the Union Square neighborhood would not make significant progress until the first years after the end of the Civil War.  But in 1856 the ground floor of No. 864 had already been converted for the carpet store of John C. Boak, who lived in Brooklyn, and Addison A. Jayne, a New Jersey resident.   The upper floors continued to be operated as a boarding house, run by Eliza Wiley.

Among the boarders in 1860 was musician Madame Wauters, who worded her advertisement in The New York Herald on March 15 that year in the third person:

Mme. Wauters, Professor of the Pianoforte.  She obtained the first prize of the Conservatoire in Paris.  She gives lessons at her residence; also at those of the pupils.  Apply at 864 Broadway, corner of Seventeenth street.

Another educator in the building in 1861 was L. Palma di Cesnola whose rooms doubled as the Polyglot Institute.  He advertised on February 2:

Conversational parlors--A second course of Conversational Lessons in French, Spanish, Italian, German and English will be formed at the Polyglot Institute, No. 864 Broadway, near Union square, as soon as the applications will be sufficient.  Private lessons in Grammar may be had of each language by native professors.  This institute is patronized by the highest society of this city.

About the same time the former carpet store became a sweet shop.  In October 1862 its owner was looking for "an intelligent boy, from 12 to 15 years of age, to go on errands and help in a confectionery."  The owner was most likely Anthony Iauch, whose "French Confectionery and Restaurant" was definitely in the space by 1867.

A. Iauch was a favored spot for women who patronized the shops on Broadway and Union Square.  In 1870 Appleton's Hand-Book of American Travel advised tourists "A. Iauch keeps a well-known and popular place at 864 Broadway, a short distance above Union Square."  And New England, a Handbook for Travellers noted in 1875 that the restaurant was "much frequented."

By then the upper floors, too, had been converted for business.  In 1874 the offices of the Music Trade Review were here.  The year's subscription cost $4 per year--a somewhat pricey $90 today.   A similar periodical, the Musical Critic and Trade Review was in the building by 1884.  It was far less costly at $2 a year.

Upon Admiral Bailey's death his children inherited equal shares in the Broadway property.  Edmund sold his quarter share to his siblings in September 1881, the price of which--$19,500 or about half a million in today's dollars--reflected the soaring property values in the neighborhood.

In 1885 A. Iausch's restaurant was replaced by the bakery of Charles A. Dean.  L. N. Vause & Son, awning manufacturers, moved its showroom and offices into an upper space by 1882.  That year the Record & Guide called it an "old-established and successful firm" and said they "transact, each year, an increased business in the way of supply plain and fancy awnings, flags, tents and window shades, as well as automatic roller awnings."

Dealing in canvas awnings was a profitable business in the 1890's.  In the decades before air conditioning, nearly every business office and store purchased custom-made awnings to deflect the heat and protect windows against direct sunlight.  I. N. Vause & Son would remain in the building at least through 1895.

Continuing the tradition set by Music Trade Review, two more publishers, The Commercial Company and The Studio Publishing Company, were here by 1894.

The Studio Publishing Company published books as well as the weekly art journal The Studio (touted as the only one in America) established in 1882.  The magazine promised between 30 to 50 full-page supplements each year with "valuable reproductions of the Master-Work of Noted Painters, Sculptors, etc., including Etchings, Engravings, Photo-Gravures...forming a magnificent collection of Pictures suitable for Framing."  A year's subscription in 1894 cost $5; or around $150 today.

In 1899 the ground floor became home to the Conrad Brothers' bakery and lunchroom.  It would remain at least through 1907, followed by the drug store of Ira. E. Belfry by 1911.

In the meantime the upper floors had changed from publishers and awnings to clothing and barrels.  Above Conrad Brothers in 1904 were Anthony Kim's shop where cloaks and suits were manufactured, A. Palmer's "clothing" business, and the office and showroom of barrel maker George Adolf.

As the century progressed the Union Square neighborhood declined.  But in the last quarter a renaissance was sparked which traveled up Broadway.  In 1987 No. 864 underwent an alteration as it and its three 1849 siblings one-by-one were cleaned, their facades restored, and updated commercial spaces installed.  Proof positive of the change in the neighborhood came in 2006 when the chain restaurant Chipotle moved into the space once home to a famous Navy figure. 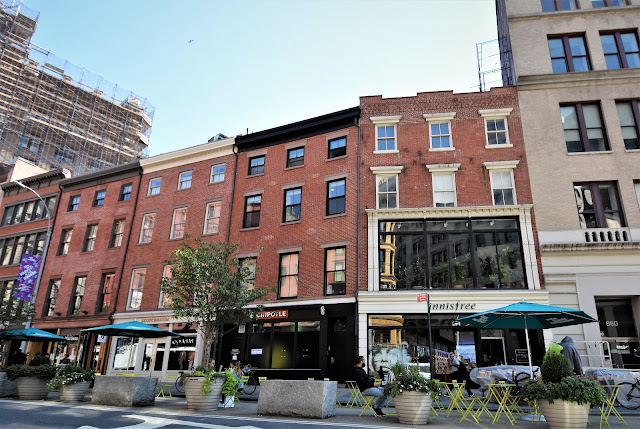 photographs by the author
Posted by Tom Miller at 12:54 AM