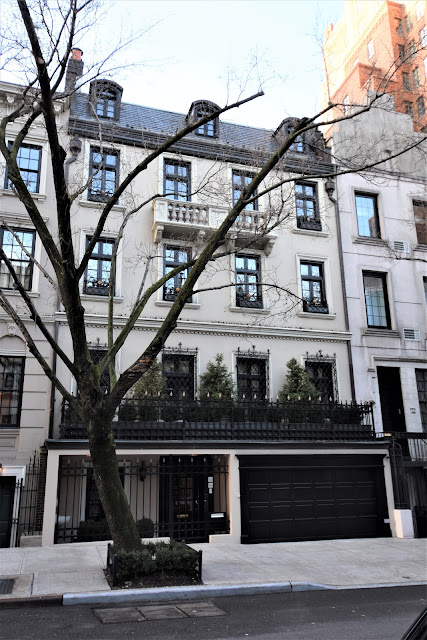 British-born architect Frederick Junius Sterner came from to New York from Colorado in 1906.  He purchased a Victorian brownstone on an East 19th Street block lined with similar high-stoop homes.  Before long he had transformed it into a Mediterranean-style villa with a stuccoed façade and red tile roof.    By 1911 the block was filled with Sterner’s fantastic renovations, earning it the nickname “The Block Beautiful."
In July 1914 Sterner purchased the two three-story brownstones at Nos. 154 and 156 East 63rd Street with plans to convert them into a single residence.  The rear yard would hold a single-story structure for his architectural studio.
Sterner combined the vintage houses internally and remodeled the exterior in his trademark stucco-covered style.  The entrances were moved to the former English basement level.  The studio was accessed by a tunnel behind a gate.  Its brick surround was embedded with ancient-looking sculptures.
The second floor openings were covered with decorative Mediterranean style grills which were echoed in the playful railing of the two-bay-wide balcony at the top floor.
Sterner settled into the house with his sister, Maude.  Working from his Mediterranean style study in 1916 he remodeled the two houses directly across the street at Nos. 153 and 155 into a Spanish Revival style villa for Mrs. William K. Vanderbilt as a wedding present to her daughter, Barbara Rutherford, and Cyril Hatch.
Neither Sterner nor his sister appeared often in society columns for their entertainments.  But an event on February 25, 1916 was a notable exception.  The New York Tribune's article entitled "Young Men Give Backyard Party" reported that Sterner, Frank Crowninshield, Bertram de N. Cruger and Henry Clay had hosted a "'Gothic backyard party' last night in the studio of Mr. Sterner," adding "Many interesting features were arranged for the entertainment of the guests."
Those guests were among the most notable in Manhattan society, including the Mayor, John Purroy Mitchel and his wife; Mrs. John Astor; the I. Townsend Burdens; Charles Dana Gibson and his wife; the Conde Nasts and many others.
In March 1917 Sterner sold the residence to Leonard Moorhead Thomas and his wife, the former Blanche May Oelrichs.  Thomas immediately hired architect F. Burrall Hoffman to make alterations.  A stairway was added, the plumbing updated, and a dumbwaiter shaft installed.
Leonard and Blanche had been married in 1910 and now had two children, Leonard, Jr., who was six years old, and Robin May who was two.  The New-York Tribune commented "Mr. Thomas is the son of one of Philadelphia's wealthiest families, a graduate of Yale, and a member of a dozen clubs.  For months after the marriage he and Mrs. Thomas entertained lavishly at their home in Narragansett Avenue, Newport." 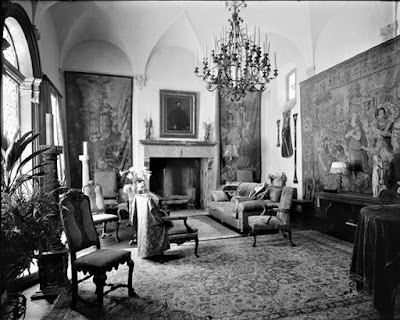 Although active in society, Blanche's schedule was filled with more than merely afternoon teas and charity receptions.  She was a successful poet, wrote a play, and was a ardent suffragist.  But it was perhaps her striking beauty for which most knew her.  In 1913 French artist Paul César Helleu had arrived in America "to find the most beautiful woman."  As he prepared to sail home to pair he told reporters "I found her.  I found her in Mrs. Thomas."  Blanche would be remembered for the rest of her life as having been deemed "America's most beautiful woman."
In April 1920 New York society was stunned when it was discovered that Blanche had obtained a divorce in Paris several months earlier.  A reporter from the New-York Tribune caught up with Blanche on April 20 in the East 94th Street apartment she was leasing.  She confirmed the divorce but refused to give details.  "I am sure that our friends would not be interested in anything of the kind," she said.
Of course, they were interested.  And so was the rest of America, especially when news of Blanche's marriage to actor John Barrymore in the Ritz-Carlton Hotel on August 5 was published.
Thomas left No. 154, initially leasing it to banker Walter Lewisohn and his family, and then to the Benjamin Moores.  By 1929 it was home to the well-known and powerful attorney and politician, judge Samuel Seabury and his wife, the former Maud Richey.
While Seabury busied himself with court cases and politics, Maud entertained.  On November 15, 1929, for instance, The East Hampton Star reported that she had hosted a luncheon here, "preceding the first session of the yearly fall meeting of the Garden Club of America."
Seabury was highly involved in politics (in 1916 he was the Democratic nominee for Governor of New York).  As votes were counted in the 1933 mayoral race, candidate Fiorello LaGuardia chose to wait it out at the Seabury house listening to the results on the radio.   On November 9 the New York Evening Post wrote that when his victory was assured, thousands cheered in the streets.  "But in the early Italian dining room of Samuel Seabury's home at 154 East Sixty-third Street, Fiorello LaGuardia, Mayor-elect, sat in a straight chair, oblivious to the back-slapping of his sponsors, deaf to the concessions of his adversaries and the rising tide of his plurality."  LaGuardia could only recall his earlier attempts at office.  "In victory, Fiorello LaGuardia remembered only defeat."
When LaGuardia was reelected four years later, he chose to take his oath of office in the Seabury house.
The Seabury summer home was in East Hampton.  For some reason Samuel came briefly back to the city in July 1938.  Because the domestic staff was with Maud, only he and the chauffeur, John Mooney, were in the house.
Seabury was reading in the library and Mooney was asleep just after midnight on July 12 when an explosion rocked the house.  Both men rushed to the top floor, normally occupied by servants, "where they found flames shooting upward," according to The New York Times.  Fire fighters extinguished the blaze, but not before extensive damage was done to the fourth floor and attic.  Two fire fighters were overcome by smoke inhalation.  Investigation traced the cause to an electrical short circuit.  Had Seabury not made the unusual trip home, the structure may well have been destroyed. 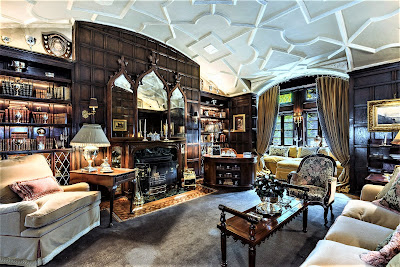 In 1948 the Seaburys sold No. 154 to the Source Teaching Society, run by May Benzenberg Mayer.  Remodeling resulted in the kitchen and other school-related rooms in the basement level, with the upper stories used as "residence of staff," according to the Certificate of Occupancy.
Mary Benzenberg Mayer had been a student of Dr. Carl Jung.  The purpose of The Source Teaching Society was to "permit modern man to have religious and mystical experiences despite materialistic pressures."  One skeptical writer called it "a group of Jungian nature-worshipers."

In 1961 another renovation resulted in a triplex in the ground floor through second.  It shared the basement level with a garage.  One apartment each were now on the third and fourth floors.  In 1994 a conservatory was erected on the roof.
By the time the house was placed on the market in 2019 it had been returned, essentially, to a single-family home although the top floor apartment was still in place.
photographs by the author
many thanks to reader Bruce Addison for suggesting this post.
Posted by Tom Miller at 1:07 AM