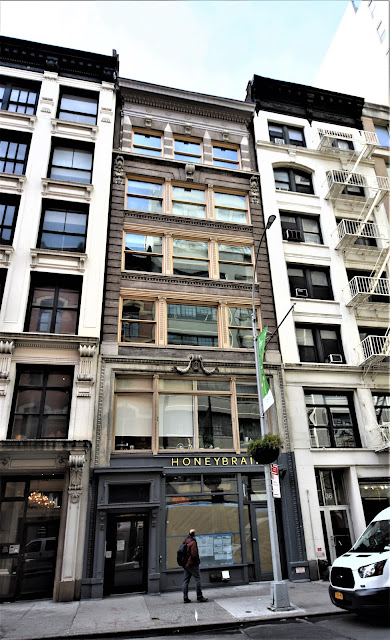 By the early 1890's Mother Elizabeth ran an industrial school for girls in the house she personally owned at No. 34 West 22nd Street.  Avoiding the term "industrial school," Mother Elizabeth and the Society of St. Martha called it St. Martha's Home.  The name perhaps referred to the fact that some of the girls, orphaned or otherwise homeless, lived here.  Mother Elizabeth ran the facility independently of any church, although the Rev. Arthur Ritchie of St. Ignatius's Church was its chaplain and he president of the Home.  He visited daily to say mass.

The Sun described the school, saying "The children are taught sewing, cooking, and housework, besides receiving a plain English education."  And the New York Journal called it "celebrated for its instruction among devout Protestant Episcopalians."

Dealing with girls who sometimes came from the streets could be difficult.  In the spring of 1897 one of the older girls, according to Rev. Ritchie, "became unruly" and "tried to stir up a disturbance in the school.  She was finally told to leave, as I heard the story, and two or three other girls left with her."

The trouble came at a time when the 22nd Street block was changing from a quiet residential enclave to a commercial hub of lofts and stores.  It prompted Mother Elizabeth to rethink her options.  On December 6 that year The Sun reported that "Miss Elizabeth Faitoute, or Mother Elizabeth" had moved the school into a "two-story Queen Anne house" in Bronxville.  "Miss Faitoute purchased the Bronxville property with her own means, and conducts the school practically unaided, hiring the teachers and servants who assist her."  Rev. Ritchie told the reporter "When the school was moved to Bronxville last spring the Twenty-second street house was closed, and is now for sale or to rent."

Mother Elizabeth's full lay name was Jane Elizabeth Faitoute and whether she was an actual Episcopal nun or not is unclear.  She was born in 1837 in New York to Jonathan and Nancy Pierson Faitoute, and at some point came into a fortune.  When accused of abusing her pupils in 1897 she protested "I have spend from seventy to eighty thousand dollars of my own money in this work, and is it likely that I do this to maltreat children?"  On the higher end, that amount would be equivalent to about $2.5 million today.

Rather than sell the vintage 22nd Street house, she hired the architectural firm of Pollard & Steinam to design a replacement structure.  On May 27, 1898 the firm filed plans which called for a six-story "brick store and offices" to cost $20,000 (in the neighborhood of $625,000 today).

The architects produced a neo-Renaissance store and loft building 23-feet wide.  The storefront and the second story show window were framed in a limestone architrave outlined by egg-and-dart carving and capped with a decorative keystone draped in foliate swags.

The third through fifth floors were clad in beige brick around sets of three grouped openings.  The architects set back the wall of the top floor slightly, to accommodate a layered, projecting section where bands of tone alternated with the brick.  Each of the openings was given an ambitious scrolled keystone which upheld the frieze below the cornice.

The building was completed in 1899 and along with the apparel factories that moved in was the New York and Paris Millinery School.  An advertisement in the New-York Tribune urged "Begin now.  French millinery taught from foundation to finish.  Material furnished.  Individual teaching.  Evening school Monday, Wednesday and Friday."

The school was in the building for years, and its success seems to have sparked a sister school.  On March 4, 1900 an advertisement in The New York Press read:

Only school in City where you get a thorough and practical knowledge of Cutting, Fitting, Draping and Finishing.  You see all kinds of latest style garments cut and made for customers; in fact we teach you every branch of the business fully.  You have your choice of the best Systems and Cutting.  We don't compel you to take a special system, or any system if you don't need one.

Dressmakers wishing to learn Tailoring have advantages that no other school can offer.

Britton & Co. was also among the initial tenants.  The ladies' tailor and furrier created upscale fashions as well as "remodelling and repairing furs."  Its ad in the New-York Tribune in September 1900 promised "Best workmanship, perfect shape, and absolute satisfaction guaranteed" and offered "a variety of this season's smartest effects, in a very choice line of fine imported cloths of the newest weaves and colors."   Britton & Co. catered to the carriage trade--women who could afford a suit costing the equivalent of $1,850 today.

Also in the building at the time was The Holly Co., makers of petticoats, suits and its branded Holly Waist.  The firm touted "The acme of Shirt Waist Making is exemplified in the Holly Waist.  The Best Fitting Garment Made."  The blouses were not inexpensive.  Prices started at $3 "and up" in 1902--a significant $92.50 today.

O. H. Bleil was another of the initial tenants.  On the night of November 19, 1901 he worked late in his office.  Unaware that anyone else was still in the building, the janitor left, locking the street doors behind him.  Unable to get out, Bleil went back upstairs and, according to The New York Times, "shouted out the front window of the third story, and [he] says many persons passed without paying any attention."  Finally his shouts attracted Policeman Hynes who instructed Bleil to climb out onto the rear fire escape.   Hynes managed to get to the roof of the two-story extension of No. 36 then directed Bleil to jump to him.

The roof of No. 36 was about ten feet below the third floor fire escape of No. 34 and Blieil "was timid at first, as the jump was somewhat risky."  But he did, resulting in the newspaper's headline the following morning "Jumped To Policeman's Arms."  His rescue did not end his troubles that night.  Now Policeman Hynes wanted to make sure he had not just liberated a burglar.  He was held until another man, whose business was at No. 58 West 22nd Street, vouched for him and he was let go.

That same year Lilliam Manufacturing Company opened its store in the ground floor.  The firm made lamp shades.  N. Becker & Sons expanded into the store in 1921.

The following year, in July, Frieda Altman purchased the building.  It is tempting to connect her with Altman, Schulhoff & Silvins; however any possible relationship is unclear.

Throughout the 20th century No. 34 continued to attract small manufacturers.  But as the Chelsea and Flat Iron districts grew trendy, the change caught up with the vintage factory.  In 1999 the store space, where dealers once hawked bolts of wool and lamp shades, became home to the Gotham Comedy Club.  In March 2000 Jesse McKinley, writing in The New York Times, said the "sleek joint...has recently been the home base of the quintessential New York comic, Robert Klein."  The article, entitled "Where the Howlers May also be a Hoot," said "It has a young clientele (a lounge and smoking area are downstairs) and special nights tailored to Latino and gay comedians, a trend mirrored in larger clubs as well."

The Gotham Comedy Club stayed on through 2005, after which the space became the Metropolitan Room.  What would be a tradition of top-tier entertainment here began immediately.

On May 13, 2006 Times columnist Stephen Holden wrote an article devoted entirely to Billy Stritch's show "Billy Stritch Sings the Mel Tormé Songbook."  Calling the Metropolitan Room "a new music club," he raved about the show, deeming it "a loving, carefully researched tribute to his idol and role model."

In 2008 the second floor was converted to a beauty parlor and the upper floors to offices.  The Metropolitan Room was allowed to provide "eating or drinking" but "no dancing."

The Metropolitan Room was by now known for its famed entertainers as well as "up-and-coming stars."  In the summer of 2010 Tony Award-winning performer Tammy Grimes opened a one-woman show called "Miss Tammy Grimes: Favorite Songs and Stories."  One reviewer said "If you wish you could have been around to witness Lotte Lenya mutter out dark cabaret songs in Weimar-era Berlin, or to experience Elsa Lanchester belt bawdy beer-hall standards, live, in a seed London tavern, don't miss this unique opportunity to witness these underground icons' rightful heir--Tammy Grimes is the Lotte Lenya of our time, with more than a little Elsa through in for good."

No. 34 received another renovation, completed in 2015, which added a penthouse level, unseen from the street.  There were now offices on the second floor, one apartment each on floors through through five, and a duplex above.  The Metropolitan Room continues to occupy the street level.

Through it all, except for expected replacement windows, Pollard & Steinam's handsome industrial structure survives little changed.  A reminder of 22nd Street's change from residential to commercial to residential.