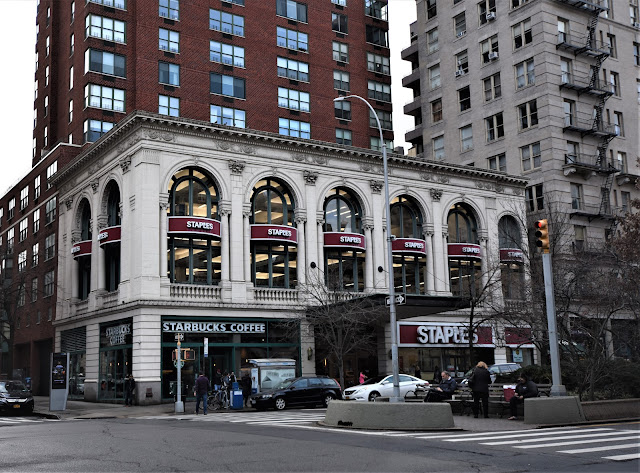 Born in Dundee, Scotland, Thomas W. Lamb arrived in New York in 1883 at the age of 12 and went on to study architecture at the Cooper Union.  Eventually, after working as a buildings inspector for the City, he established his architectural office, Thomas W. Lamb, Inc.  His first commission for a theater came in 1909 from William Fox, who was involved for the fledgling moving picture industry.  Within eight years he had designed three more motion picture theaters on Times Square.

On March 26, 1913 The American Architect reported that Lamb had filed plans for a "3-sty theatre and stores to be erected on the corner of Broadway and 81st St. for the Fulton Building Co."  Construction costs were projected at $130,000, or about $3.4 million in today's terms.

Unlike Lamb's projects for William Fox, the 81st Street Theatre was intended mainly as a vaudeville venue, with "photo-plays" as an added attraction.  It was completed by the end of April the following year.  The Broadway section which held the lobby, ticket booths and lounges was three stories tall.  Its dignified neo-Classical style facade was executed in white terra cotta and featured soaring double-height arches flanked by columns and separated by tall Corinthian pilasters.  The auditorium directly behind was clad in dull red brick which purposely did not compete with the Broadway showpiece.

In its July 1914 issue Architecture and Building beamed "The new Eighty-First Street Theatre...which has just been opened, is decidedly a step forward in the erection and equipment of a modern vaudeville and photoplay house.  The amount of study which has been given and the taste displayed throughout this entire structure is evident, even to the exterior of the building which is of matt [sic] glaze white terra cotta."

The lobby was paneled in Caen stone--a marble-like material--and its ceiling was decorated in "delicate clouded effects."  The critic said "On entering the theatre one is impressed with the harmony and refined richness of the entire color scheme."  The carpeting and the curtains were deep red.  The seats were upholstered in Spanish leather dyed to match.  Above the audience was a large mural depicting music and dance.  Architecture and Building commented that it "introduces just a sufficient amount of color to give a rich note to the entire color scheme."

Acts in vaudeville theaters changed often and patrons visited more than once a week.  The proprietors of the new theater quickly established a clever gimmick to keep its customers coming back.  On July 2, 1914 The Evening World reported "At the Eight-first Street Vaudeville and Motion Picture Theatre, the management lends umbrellas to patrons in rainy weather."

A highly unusual event took place on September 25, 1918.  Members of the Screen Club staged a benefit for its house fund.  Moving Pictures magazine reported "Many picture people were present.  The proceeds for the club came from the sale of souvenir programs and autographed photographs, also the difference in the advance of seat prices."

None of that would have prompted press coverage.  But then at 11:00 four audience members were selected and brought on stage.  While the audience watched, a motion picture was made.  Moving Pictures explained "The film was to be 500 feet in all, and will be shown at the theatre October 15-17."

The management was rethinking its programming by the spring of 1919.  In March Variety wrote "This theatre divides its program with a feature picture, playing three [vaudeville] acts at either side of the film.  Through that the theatre confesses that first it is a picture house rather than vaudeville, and secondly it prefers pictures."

On September 1 that year the management of the theater was turned over to B. F. Keith, who immediately changed the name to B. F. Keith's 81st Street Theatre.  That was the only initial change.  Vaudeville reported "The house will open with six acts and a picture, without a headline attraction billed."  There were two performances each day, "placing it in the big time class," said the trade journal.

Audiences showed their disapproval of vaudeville performers by tossing pennies.  On November 1, 1920 a group of well-dressed young men in the orchestra section were caught by booking agent Charles Stockhouse "casting pennies on the stage during the turn of Clayton and Lennie," as reported in Vaudeville.  Stockhouse went to the street and found a policeman, who arrested the youths.

As it turned out, they were not neighborhood rowdies, but college boys "home from school on an election day week-end vacation."  The night court judge "reprimanded the penny throwers, stating to them they stood in no different position before him, though they were sons of wealthy fathers, than any other culprit," reported Vaudeville.  "He warned them if a further complaint was lodged against either they would receive a jail sentence."

Patrons enjoyed the works of the best directors and most celebrated screen stars here.  On January 11, 1920, for instance, The New York Herald announced "At B. F. Keith's Eight-first Street Theatre the feature will be Cecil B. De Mille's 'Male and Female,' with Miss Gloria Swanson in the lead.  There will be six vaudeville features in addition to the feature."

Among the live acts in February 1928 was Rudy Vallée and his musical group, the Connecticut Yankees.   The crooner was the equivalent of a pop star of today and drew masses of screaming female fans.  The crush of devotees on opening night caused traffic to come to a halt on Broadway.  He mentioned the incident in his 1930 memoir, Vagabond Dreams Come True, calling it "the tremendous outburst we received."

At mid-century the venue had become a full-time motion picture theater, operated by Howard Hughes's R. K. O. Pictures.  The New York Times theater critic was less than thrilled with The Lisbon Story on September 6, 1951.  Saying that the film "arrived from over the water yesterday afternoon at the R.K.O. Eighty-first Street Theatre, British National Film, the company responsible did neither continent any great favor."  He concluded his critique saying "Anyone who pays good money to see this one deserves the boredom he'll get in return."

Then, in December 1953, CBS-TV announced it had leased the property.  The venue was converted to its first color television studio.  Among its most memorable productions here was the 1957 Rodgers & Hammerstein Cinderella starring Julie Andrews.  It was the only musical written by the partners expressly for television.

The elegant terra cotta building, now named the Reeves television studio, seemed doomed in November 1984 when it was sold to a developer for $11 million.  The Landmarks Conservancy pronounced the structure "an excellent example of early classical and elegant movie palace building form."  The following spring, however, The New York Times reported "But the landmarking effort was never pursued."

It was only the developers, Louis V. Greco, Jr. and Peter Gray, who had formed the Landmark Restorations Company three years earlier, who saved the front of the building.  When they purchased the building the television soap opera "Search for Tomorrow" was still being taped there.  The firm announced plans for a 22-story apartment tower, Renaissance West, designed by Beyer Blinder Belle behind the gutted Broadway section.  The New York Times remarked "Landmark Restorations has made a specialty of projects with a preservationist character, or at least a sensitivity to history." 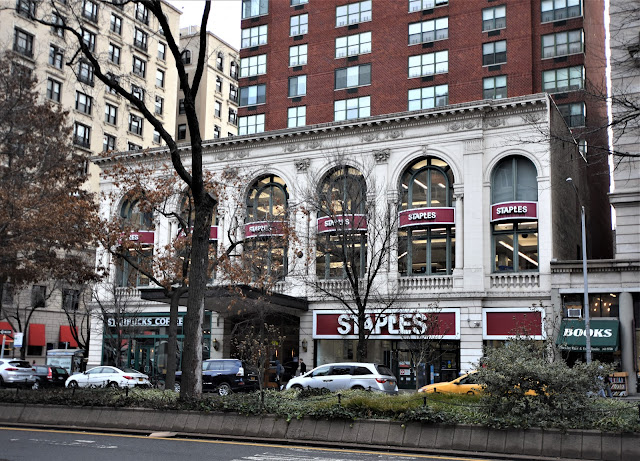 At a time when developers are demolishing vintage structures at an alarming rate, it is refreshing that at least the shell of Thomas W. Lamb's handsome 1914 theater was preserved by one of them.