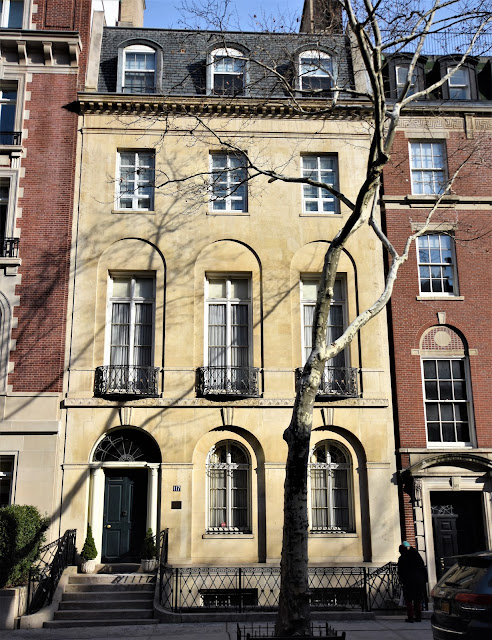 Johnston Livingston Redmond graduated from Harvard in 1911 with a degree in architecture.  He never practiced that craft, however.  After serving as a ensign on the U. S. destroyer Stevens during World War I, he focused his time and money on charitable causes and social activities.

Redmond's mother, Estelle Livingston, was descended from Robert Livingston who arrived in the Province of New York in 1673.  The daughter of Johnston Livingston, she had inherited the family homestead, Callendar House, in Tivoli, New York, built by Henry Gilbert Livingston in 1794.  Johnston's father, Geraldyn Redmond, made his significant fortune from his banking firm, Redmond & Co., and the linen business he had inherited from his father, William Redmond.

Johnston Redmond's personal wealth was greatly increased when his mother died on June 17, 1916 leaving an estate of between $3 and $4 million; followed by Geraldyn's death in November 1918.  Still technically in mourning, his relatively subdued wedding on June 5, 1919 to Katharine Sergeant Haven was held in her parents' French-style mansion at No. 18 East 79th Street.

While Johnston and his two brothers, Geraldyn Jr. and Roland, shared in their parents' estates, including the massive Redmond double mansion at 701-705 Park Avenue, it was Johnston who inherited Callender House.  His and Katharine's city house was at No. 705 Park Avenue.  They soon acquired another country estate, The Plains, in Virginia where they enjoyed horses and hunting.

Johnston was active in the civic live in Dutchess County, where his family's ancestral home was located.  He was a trustee of Vassar Brothers Hospital and of the Northern Dutchess Health Service Center; aided in relief work around Red Hook, New York, and was a director of the First National Bank of Red Hook.  He went so far as to represent the County Boys Scouts Council in the National Council and arranged for two locals scouts to attend the World Congress in England.

On March 1, 1921 The New York Times reported that millionaire architect Isaac Newton Phelps Stokes had purchased "the three five-story residences at 113 to 117 East Seventieth Street" between Park and Lexington Avenues with the intention "to alter the buildings into American-basement houses with elevators."

Redmond could have used his architectural training to design the new mansion himself.  Instead, he turned to an architect with a social pedigree as impressive as his own, Frederic Rhinelander King.  He was a member of two of the oldest and wealthiest families of Newport and New York City.  He had graduated from the Harvard three years before Redmond, then studied at the Ecole des Beaux-Arts in Paris for three years.

The onslaught of the Great Depression did not hamper the Redmonds' plans.  King filed plans for the new house in August 1931, estimating the cost at $170,000--about $2.7 million today.   As work progressed four months later, The New York Times exhibited astonishment at the flurry of lavish private home construction.  On December 6 it noted that "at this present time in four through-fares on the upper east side...seven expensive dwellings have recently been finished or are nearing completion."  The article pointed out the Redmond mansion, saying the 70th Street block "in recent years has become one of the choice residential blocks in the city."

King produced what years later architectural historian Christopher Gray would call "a majestically impassive limestone house almost as good as anything on the Royal Crescent in Bath, England."   Gray was referring, apparently, to the quiet elegance of the mansion and not its architectural style.  (The Royal Crescent homes, designed by John Wood in the 18th century are Georgian, the 70th Street mansion is neo-French Classic.)

Indeed, Frederick King focused on understated dignity, foregoing fussy ornamentation.  The sheer surface of the stone facade was broken only by the blind arches of the first and second floors, the semi-circular iron balconies of the French windows, and a delicate wave-crest bandcourse.  Above the simple stone cornice a slate-shingled mansard wore modest arched dormers.

The Redmonds had four children--Katharine Sergeant, Moira Livington, Thomas Johnston Livingston, and Joseph Woodward.  They traveled between their three homes, often entertaining on the 81-foot yacht De Grasse moored at Tivoli, near Callendar House.  MotorBoating described it in June 1920 as having "two staterooms, one with two berths and saloon below aft, and a dining saloon on deck.  Good crews' quarters are provided, with shower bath."  The captain was outfitted with his own stateroom and office.

But Johnston would not enjoy his new mansion for long.  In January 1933 the family traveled from Callendar House to their Virginia estate for hunting.  Soon after arriving Redmond fell ill with the flu and was bedridden.  Then, while "riding to the hounds," Katharine was thrown from her horse and broke both legs.

According to The Rhinebeck Gazette, Redmond "rose from his bed to take Mrs. Redmond to Emergency hospital" about 50 miles away in Washington.  The exposure and strain worsened his condition, which developed into pneumonia.  The 45-year old died about a week later, on February 12, in the same hospital where his wife was recuperating.

Katharine was released from the hospital to accompany her husband's body back to New York.  His funeral was held in the Church of Notre Dame in Manhattan and he was buried in the family graveyard in Tivoli.

Katharine inherited all three of the Redmond properties.  She remained in the 70th Street house, tending to her own charitable causes.  Then in April 1940 she quietly married William Henry Osborn, an executive with Phelps Dodge, with no public fanfare.  Several days later The New York Times mentioned "Although the place of the ceremony was not disclosed, a small reception was given at the home of the bride's father, 760 Park Avenue."

The newlyweds remained at No. 117 East 70th Street with Katharine's children.  When war broke out in Europe, Katharine added that cause to her agenda.  On December 1, 1943 The Times noted that she was named "vice chairman in charge of women's war bond activities in Manhattan" and noted she was the "former head of the women's speakers' bureau of the State War Finance Committee.  She was simultaneously a board member of he Community Service Society and the New York Hospital Social Service, and sat on the advisory committee of the Cooper Union Art School.

But her attention would be focused much closer to home beginning in 1944 when Katharine became the first of her children to marry.   Her wedding to U. S. Marine Paul Gordon Evans on June 6 was held in Church of Notre Dame on Morningside Drive where her father's funeral had been held.  Afterward a "small reception" was given in the 70th Street house.

There would be at least two more wedding reception at No. 117.  On June 10, 1954 Katharine's cousin, Pamela Fowler McKim, widow of Robert James McKim, Jr., was married in St Bartholomew's Church to George Ronald Furse.  The guests came to the Osborn house following the ceremony.  And on the evening of March 17, 1967 the wedding reception of Katharine Serena Evans and Robert Rose Carson, Jr. was held here.

Katharine continued to be active in social and philanthropic efforts.  When the annual Imperial Ball in the Waldorf-Astoria for the benefit of the Hospitalized Veterans Service of the Musicians Emergency Fund was being planned in the fall of 1956, the organization committee held its first meeting in the 70th Street house.  Among the co-chairs was Mrs. William Randolph Hearst, Jr.

Somewhat surprisingly, Katharine and William allowed the exterior of their home to be filmed as the townhouse of a socialite character in the 1969 film Midnight Cowboy, starring Jon Voight.  In the movie, lead character Joe Buck's hopes are dashed when the smartly-dressed woman he was following disappears into the mansion.

William Osborn was 76 years old when he fell from a horse on the couple's upstate estate, Forest Farm near West Point, in June 1971.   He did not recover from the shock and died in his sleep on July 28.  Three years later, on January 11, 1974, Katharine died at the age of 75.

The Redmond house became Irving Homes Arts.  Its published mission was to provide "persons dedicated to the homemaking profession the training needed to carry out hospitality careers with human virtues, sound Christian doctrine, and concern for others consistent with the social teachings of the Roman Catholic Church."

Known today as Alderton House, the Catholic-based, non-profit corporation's mission is "to educate and train women to work well and with purpose in their profession."  Programs are offered throughout the city in cooperation with other organizations, like the Murray Hill Institute, and The Avenue Leadership Program, Etc. 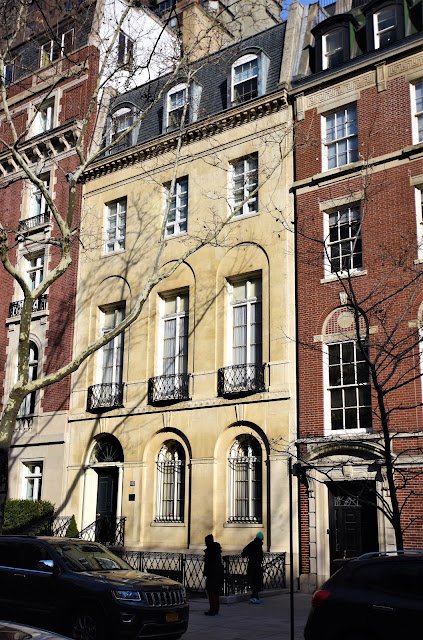 Other than a barely-noticeable bronze placard next to the door, there is no evidence that the Redmond mansion is anything other than a private dwelling.  Its chaste facade is virtually unaltered since its completion in 1932.