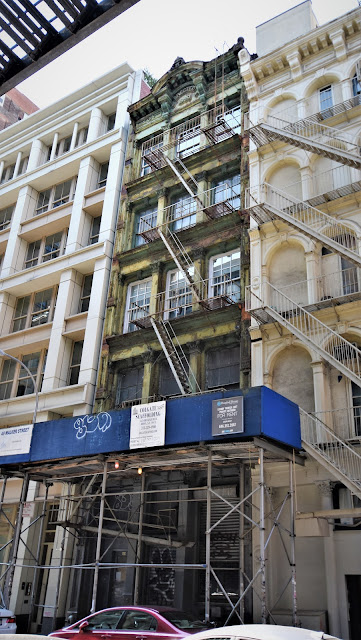 In 1859, when publishers W. R. C. Clark & Meeker occupied the old building at No. 49 Walker Street, Daniel D. Badger's innovative concept of prefabricated cast iron facades was just taking hold.  Within the decade it would transform the face of New York City's commercial structures--especially in the districts that would be later called Soho and Tribeca where commercial buildings were rapidly taking the place of three-story brick houses.

But for now the publishing firm made do within its vintage structure, releasing The History of the City of New York that year.  Two other publisher, Doolady's and M. Gauntt, and book jobber David Davidson shared the building.


Change was about to come on March 15, 1869 when Superintendent James M. MacGregor approved plans for an "iron store, situated No. 49 Walker-street; five stories and basement; owned by R. H. L. Towndsend."

Richard H. L. Townsend, a well-to-do silk merchant who was turning his attention to real estate investments, had commissioned Isaac F. Duckworth to design his new loft building.  Prolific in the downtown area, the architect had enthusiastically embraced the concept of cast iron facades.

Construction was completed before the end of the year.   The five-story building was a commercial take on the newly-popular French Second Empire style.  The four identical floors above the storefront featured flat-arched openings recessed within square enframements, stylized Corinthian pilasters, and prominent cornices between each floor.

Stealing the show was the impressive upper cornice, its arched pediment upheld by hefty brackets.  Molded into the frieze was the construction date. 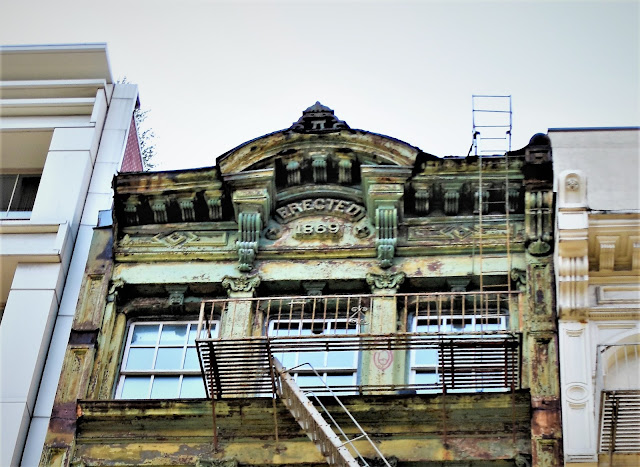 The area was becoming the dry goods district and Townsend's new building would fill with apparel and textile-related firms.   In 1888 Meyer Gans, cloak manufacturer, was here as was the Morris Brothers suspender factory.

On Thursday night, April 26 that year a fire broke out in the building.  It was quickly extinguished and there was little damage either by fire or water.  But Morris Brothers quickly realized they had suffered a different type of loss.

Unscrupulous firefighters sometimes took advantage of the chaos of blazes to help themselves to goods.  In the worst cases some rogues were convicted for setting the fires in order to gain access to the booty.  On  April 28, 1888 The Evening World reported "No new light has been thrown upon the alleged theft of suspenders in the store of Morris Brothers...during the fire."

There was no question as to who the perpetrators were in the mind of Abram Morris.  The World said "he has no doubt that the robbery was committed by a member of the Fire Department, for there were no outsiders in the building."  According to the article the brothers explained "their money loss is comparatively trifling, but they are indignant that it should become necessary to keep a watch on those who are paid to protect their property."

Morris Brothers remained in the building until October 1897 when the firm moved to No. 575 Broadway.  By then Morris Mikola, waist manufacturer was in the building, employing 13 factory workers--three men, seven women and three girls.

L. H. Rice & Co moved in soon after.  The company was formed on Walker Street in 1865, "as a manufacturer of bosoms only," according to The Clothier and Furnisher years later.   Now it was the well-known maker of the "Palmetto" brand shirt.

The Clothiers' and Haberdashers' Weekly announced the firm's new spring line in 1899, noting "The assortment contains many novelties and striking effects."  The high quality of the shirts was evidenced in the cost.  Retailers were offered "novelties" (stripes, for instance) at from $4.50 to $18 a dozen; and the "fine line of white shirts" at $4.75 to $9 a dozen.  The wholesale cost of the most expensive styles would be equal to about $537 a dozen today, or $44.75 each.

After the turn of the century the building had a significant turnover in tenants.  By 1905 L. H. Rice & Co.had moved to No. 618 Broadway.  New occupants included Saul Bros. & Co., "general line of dry goods;" Diamond & Co., makers of "overalls and duck clothing:' and children's dress manufacturer L. Feldstein & Co.

One tenant engaged in a far different industry was the Bent Glass Novelty Company, here by 1909.  Run by Oliver C. and Robert O. Brown, the firm had been established in 1894 and was listed as a "manufacturer of illuminating glassware."  In other words, it created the highly-popular leaded glass lamp shades.


Many of its skilled workers and artists were Italian.  Three of them were brothers, Giuseppe, Francesco and Vincenzo Gambaro who came from Sicily.  The New-York Tribune described Francesco as "a cripple" and Giuseppe as "a skilled designer."  Vincenzo was their foreman.

Things went well until Giuseppe, who made an admirable salary of $50 a week (more than $1,300 today) was fired early in 1909.  He blamed Vincenzo for his firing, and then, according to The Sun, "was made angry by the praise his father and mother gave Vincent [sic] for supporting them."  The newspaper editorialized by adding "Giuseppe is the ne'er do well of the Gambaro family."

Giuseppe's anger turned into a simmering vendetta.  On February 8 he appeared at the factory and told Vincenzo "come and see what I've got."  He pulled out a revolver and fired.

A terrifying scene unfolded as Vincenzo tried to escape with his life.   He "ran the length of the store and Giuseppe pursued, firing as he ran.  The pursued doubled and twisted among the shop fixtures, but his brother was close behind and kept up the fire until Vincent [sic] dropped dead."


The New-York Tribune reported he had fired five shots into his brother.  In the meantime, Francesco had attempted to stop the murder, "but was thrown aside during the chase about the store," according to The Sun.

Francesco found his own life threatened when he appeared as the principal witness against his brother on May 18.  As he left the courtroom, a voice among the crowd whispered in Italian "You won't live to see this day out."  He was given a police escort home.

Giuseppe was convicted and the artist-turned-murderer was sent to the electric chair in Sing Sing prison on July 26, 1910. 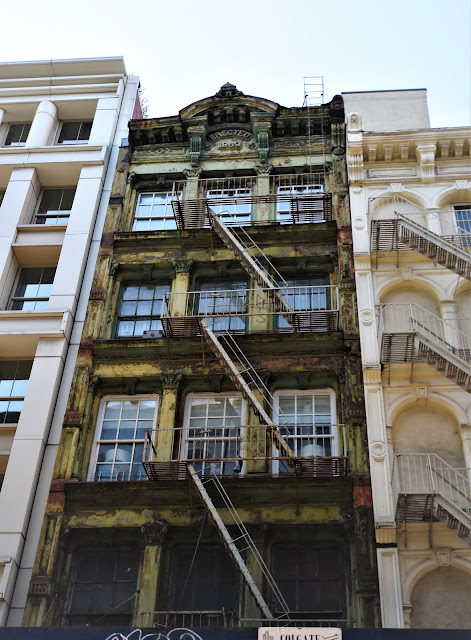 The year of the murder, on November 3, Robert O. Brown was notified that some of his employees had joined a union.  Two days later a strike was declared.  Thinking he could arrange a compromise, Brown called the union's committee into his office.  But its president, named Provenzano, "made absurd demands."

Among them was reducing by work week by five and a half hours with no reduction of pay.  Moreover, Provenzano then insisted that after that demand was met, Brown would employ only union members.

"I was to let him run my business, that is.  Not much!" exclaimed Brown.  "I'd rather go to New Jersey and raise potatoes than let Mr. Provenzano run my business."

The Sun, calling the Bent Glass Novelty Company "the leading house in the bent glass industry," interviewed Brown who expressed his frustration and anger on November 18 .

"We complained to the police only after our place of business had been surrounded by strikers on picket duty, as it is called, and after those pickets had by force and intimidation deprived us of the services of several employees not members of the union who were eager to remain at work."


Things then got ugly.  Labor unions often resorted to violence to obtain their goals and Brown related that "There have been some street brawls and fistfights as part of the strikers' method, but even worse than that was been the threats, which have so frightened some of our employees that they are afraid to come to work."

One of the Bent Glass Novelty designers assumed he was not involved in the conflict, since he was a leaded glass artist and not a worker as such.  He arrived one morning and told his bosses he had been threatened outside, but that he would continue working.  Brown said "That day he went out to lunch and they 'got him.'"

Like Giuseppe Gambaro, the skilled artist was an Italian immigrant.  Most of the strikers were Italian-born and they made it explicitly clear in their native language that "if he did not quit it would go ill with him."  Brown said "He seemed to understand what was meant."

The Bent Glass and Brass Workers Union had set up a headquarters of sort--a tent made from tarpaulins--at the corner of Walker and Cortlandt Streets where they could watch the comings and goings from No. 49.

The Bent Glass Novelty Company and 11 others (there was a total of 15 companies in the city making art bent glass at the time) formed an association to hold out against the union until their demands were more reasonable.

In February 1916 Richard H. L. Townsend's son, J. Allen Townsend, sold the building to Daniel P. Morse, president of the Parmelee Realty Corporation.  The aging building needed upgrading and the Record & Guide announced that architect James S. Maher would be doing improvements.  Included were "new store front, fireproof stairways, steel ceilings and other modern details."  The building was vacated so the renovations could be done.

By the time work was completed in October all four of the upper floors had been leased to Teijeiro & Co., cigar manufacturers.   The cigar business seems to have lagged by the end of the five-year lease, because in 1921 the firm took only the second floor.  The upper floors were taken over by The Irish World, publishers of the magazine by the same name.

Patrick Ford had come to America from Ireland in 1847 was a highly active in the Irish Freedom movement.  He founded The Irish World in 1870 and headed it until his death in 1913.  His son, Austin J Ford, then took over the reins.

The editorial offices were located on the third floor of No. 49, with the printing operations above.  On July 23, 1928 Ford and an editor, Francis P. Jones, went to lunch at around 4:00 then returned to work.  Later that evening Jones entered his boss's office to find him asleep at his desk.  The New York Times reported "it was when he attempted to awaken him by shaking his arm that he discovered the publisher had died."  The 58-year old executive's death was attributed to a heart attack.

For decades soon after the building was home to the Atlantic Sponge and Chamois Co., Inc.  But the Tribeca renaissance arrived in 1981 when owner Elihu Lipkis completed a three-year renovation that resulted in a store at street level and one apartment on each of the upper floors.  Department of Buildings records noted that each apartment included a "fine arts studio."

The relationship between Lipkis and his tenants was no love affair from the start.  On April 5, 1982 the State Court of Appeals upheld their eviction following a long-lasting rent strike.   Lipkis started eviction proceedings for nonpayment of rent.  The tenants said they withheld rent because he "refused to provide them with heat and other essential building services," as reported by The Times. 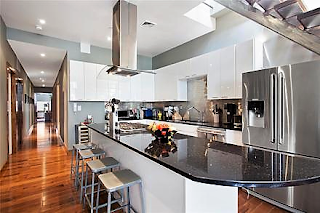 
photographs by the author
Posted by Tom Miller at 2:58 AM