By 1889 developer Henry Heinken had collaborated with architect James W. Cole on several apartment building or residential hotel projects.  That year they would work together again after Heinken purchased the two lots at the northwest corner of Central Park West and 87th Street.

The rapid development of the Upper West Side was evident in the recent history of the property.  The Vanderpool estate had sold it just months earlier to operators Maclay & Davies.  The partners resold it to Heinken for $42,500—in the neighborhood of just over $1 million in 2016.

Cole designed a five-story, brownstone-fronted building that melded Renaissance Revival with Romanesque.  Stone carvers were put to work embellishing the façade with panels, friezes, capitals, and tile-like decorative buttons.  Henry Heinken was obviously highly pleased with the design, for he had Cole create a near-copy of the building at No. 151 West 22nd Street almost simultaneously.

The apartment building was completed in 1890.  Unlike so many of the Upper West Side flat buildings, it used its address rather than a name for identification.  No. 3 West 87th Street filled with professionals like Professor John C. Krause.  Moving in with him and his wife was Krause’s widowed mother-in-law, Frances D. Porter.  Born into the wealthy Philadelphia Davis family, Frances had married Capt. D. W. Porter of the United States Army.  She died at the age of 66 in the Krause apartment on November 24, 1896 and her funeral was held there three days later.

Resident Marie de Montalvo was ahead of her time.  She was a college graduate, a professional writer, and, most surprisingly, she retained her maiden name after marrying Robert Neville.   She made her opinion about Civil War motion pictures clear in a letter to the editor of The New York Times on July 23 1913.  The subject was wildly popular at the time, with a reported 98 films based on the Civil War produced that year alone.

Marie’s letter expressed surprise that “no one has ever seen fit to protest against the civil war moving pictures, whose chief purpose seems to be to incite again the blood lust of the North against the South and bring wild yells of enthusiasm from the young boys in the gallery when the pictured bluecoats sweep down upon the Confederates and leave them slaughtered in the ditches.  Surely the war of brother against brother was horrible enough while it lasted without keeping alive its most shocking aspects in the eyes and minds of our young people to to-day.”

Interestingly enough, within eight years Marie de Montalvo would become a columnist for The New York Times rather than merely a reader submitting in letters to the editor.

At around 11:00 on the sultry hot night of June 25, 1906 Harry Kendall Thaw shot architect Stanford White on the rooftop garden of Madison Square Garden.  The sensational and scandalous tale of infidelity, jealousy and murder riveted the nation.  On January 23, 1907 the long jury selection process began.  Among the potential jurors was an apparently not overly-enthusiastic Walter McDougall, who lived at No. 3 West 87th Street.

The New York Times reported on the questioning of McDougall, who seemed to answer questions from the prosecutor and defense lawyer satisfactorily.  However the following day the New-York Tribune reported “Walter McDougall, of No. 3 West 87th street, proved an acceptable juror to both sides, but he said he had recently recovered from several weeks’ illness and showed a physician’s certificate that he was not strong enough to stand the strain of a long trial.  He was excused by consent.”

The lifestyles of the reticent juror and his wife reflected the social and financial status of the building’s residents at the time.   On August 2, 1908 the New-York Tribune reported on many Manhattan families who maintained summer homes in the Pocono Mountains.  The article included Highland Dell, the summer home of Walter McDougall near Stroudsburg, Pennsylvania.

Living at No. 3 that year were Albert Sutton Macgregor, his widowed mother, and his unmarried sisters.   The 54-year old architect had graduated from Yale in 1876.  Although he had originally studied law, he took up the profession of his architect father, James M. Macgregor.  An expert on Building and Tenement House Laws, he worked for the Hudson Companies where, according to Yale’s Trigintennial Record in 1908, he was “head of the construction department engaged in building the terminal buildings, power houses and tunnels.”

Despite her age, Albert’s mother was active in charitable works.  On December 5, 1909 The New York Times noted that she “will entertain the members of the committee hat assisted her at the recent bazaar given for the East Side Clinic.”

Albert’s sisters were identified in the social columns as “the Misses Macgregor.”  On February 20, 1910, for instance, The New York Times noted “Another card party of the week was that given by the Misses MacGregor [sic] of 3 West Eighty-seventh Street.  The favors were appropriate to Washington’s Birthday.”  The Macgregors would remain in the apartment at least through 1913.

Adding to the literary tone in the building set by Marie de Montalvo were authors Rossiter Johnson and his writer and activist wife, Helen Kendrick Johnson.  Born in 1840 Rossiter was a writer and editor who had earned his reputation writing articles for periodicals, editing scores of other authors’ works, and writing both fiction and non-fiction. Among the books he wrote while living at No. 3 West 87th Street were The Clash of Nations, Captain John Smith, Episodes of the Civil War, and his wife’s life story, the Biography of Helen Kendrick Johnson (published in 1917).  While living here he was editor of Appleton’s Annual Cyclopaedia, a position he had held since 1883.

Johnson had married Helen Louise Kendrick in 1869.  Shortly afterward she began writing children’s literature, poetry and travel articles.  But her greatest recognition would come when she took a fervent stand against women’s suffrage (as did her husband).  In 1897 she wrote Woman and the Republic, which argued that women did not need the vote to gain equality and that woman’s role as home keeper was essential to maintain the American republic.  In 1910 she founded the Guidon Club, an anti-suffragette organization.

In March 1919 the building was leased to the management firm of Adie Company.  The Sun, on March 13, reported “The leasing company expects to alter the building into small housekeeping suites.”

Another writer-editor in the building by 1924 was 35-year old Lester Douglas Wise.  An associate editor of The American Standard, a semi-monthly magazine, Wise found himself in trouble with Governor Alfred E. Smith that summer.

On the afternoon of Tuesday June 23 six newsboys were stopped from selling the magazine and two days later Wise was arrested for libel, along with the editor, 46-year old Charles Louis Fowler, and his son Louis.  An article in the magazine entitled “A Patriot Aged Twelve” was purported to have been written by a 12-year old boy.  It depicted the Catholic Governor as a “wet papal Governor” and protested the possibility of a Catholic President.

The article said in part “Awake, sleeping Protestants, do not let this vassal of a foreign potentate hypnotize you into making him the next occupant of the Executive Mansion!  No, this devout subject of the Pope never shall be the Chief Executive of the mightiest nation in the world if all true Americans do their part in defeating Smith.”

It went on to denounce the Knights of Columbus and called parochial schools “merely dens of hatred, malice and deception.”  The inflammatory nature of the article (which could hardly have been written by a pre-teen) was such that, according to The New York Times, “When the three men were arrested they were hustled to the police station as a precaution against violence.”

No. 3 West 87th Street was home to writer and thinker Gregory Polonski by the early 1930s.  Born in Russia in 1872, he had taught in the Universities of Petrograd and Leipzig.  He and his wife, the former Anna Neitzschik, had arrived in America in 1921. Polonsi wrote many books and treatises on philosophical subjects and was best known as an exponent of the Spinozistic metaphysical philosophy (which maintained that all things in nature “have been determined from the necessity of the divine nature to exist and produce an effect") and Cartesian logic, based on the work of Rene Descartes.

While her husband wrote and lectured, Anna Neitzschik Polonski was both an artist and singer.  A contralto, she was a member of the Metropolitan Opera Company.  She remained in the 87th Street apartment following Gregory’s death on April 12, 1933.

Another operatic residence was baritone Martino Rossi in the 1940s.  He had sung with Chicago, Philadelphia and New York opera companies and, since 1939, was a voice teacher.  In the fall of 1949 he became ill and on Sunday, February 6, 1950 he died in his apartment at the age of 58. 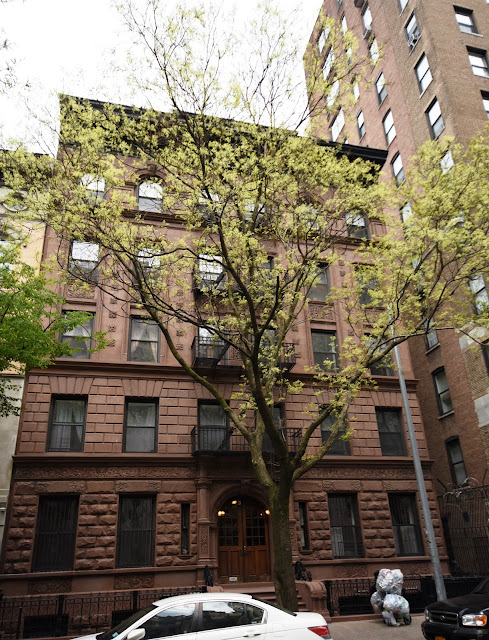 Little has changed to the exterior of James W. Cole’s brooding brownstone building after nearly 140 years.  As the apartments were broken up and reconfigured, the interiors were lost; replaced by 20th century functionality.  Nevertheless, No. 3 West 87th survives as a delightful relic of early apartment living.