By 1850 America had developed at a whirlwind rate.   A proposal to construct a railroad to the Pacific Ocean was being discussed in Washington, the gold rush of a year earlier had planted the seeds of development from coast to coast, and in New York the banking industry was exploding.

In the four years between 1849 and 1853 the number of banks in the city more than doubled—from 24 to 57.   Porters rushed along the streets with bags of coins, exchanged at other banks for checks.   A formalized procedure for settlements and accounting was non-existent.

In 1853 George D. Lyman set forth his suggestion that banks send and receive checks at a central location, and the idea took root.   On October 11 that year the New York Central Clearing House opened in the basement of No. 14 Wall Street with 52 of the 57 banks participating.  The tangled knot of exchanges among banks had been unraveled.   In 1858 it moved to the fourth floor, later adding he fifth as well.

In 1875 the Clearing House moved to the building at Nassau and Pine.  But as the century drew to a close, that too was universally recognized as inadequate. Banking historian James Smith McMaster, in 1902, said “In the latter part of the year 1892 a plan was set on foot for the erection of a new building for the New York Clearing House Association.  Increase in the volume of business transacted had made an enlargement of the accommodations quite necessary.”

Not only was the Clearing Room now too small, there was a need for vaults to store the gold and, according to Clearing House Association records, “the light and ventilation were primitive and insufficient.”

At a meeting of the association on December 29, 1893 it was agreed to acquire the property at Nos. 77-83 Cedar Street, between the National Bank of Commerce and the American Exchange National Bank.  Just over two weeks later on January 17, 1894, the building committee released a hint of what was to come.

“Since the building will be used solely for Clearing House purposes, the opinion prevailed that interior arrangement, with ample vaults and storage room, should be suitably provided, rather than a pretentious exterior.”

The idea of foregoing a “pretentious exterior” lasted approximately three months.  Seven architects submitted plans for the New York Clearing House building and after several weeks of discussion, the design of Robert W. Gibson was selected on April 21, 1894.  The English-born architect was already responsible for several notable Manhattan structures including St. Michael’s Episcopal Church and the striking West End Collegiate Church, both on the Upper West Side, the United States Trust Company, the Botanical Museum at the New York Botanical Garden, and the Fifth Avenue Bank.

On the day following Gibson’s selection, The New York Times announced “There will be four stories and a basement in the structure, which will have a marble front.  One of the striking features of the front will be four Corinthian pillars of polished marble.  A dome will surmount the building.”

Things moved quickly.  By July 1894 the old building on the Cedar Street site had been demolished and Gibson revealed his sketches to the press.  The Times described it as “of white marble, in Italian Renaissance style [and] detached from adjacent structures, and preserves its own separate character.”

Gibson’s near-ecclesiastical design (The Times called it a “Temple to Finance”) had a regal bearing, reminiscent of the grand Renaissance structures of Rome.  The white marble two-story columns supported an entablature announcing the Association’s name.  Above an ornate cornice the windows of the third floor were masked by pierced marble panels, separated by statues on pedestals, carved with the coats of arms of the nation, the city and the state.  The New York Times said “The dome is principally an internal feature.  It will not be seen from the street, except at a few points, but the composition of the building is complete without it”

On October 2 the cornerstone was laid “with appropriate ceremonies.” Only three months later, on January 15, 1896, the building was formally dedicated.  James Smith McMaster remarked “The dedication of the new Clearing House by the New York Associated Banks attracted wide attention.  The magnificent of the building and the costly appointments of the structure indicated the importance of the business which rendered them necessary and befitting.”

The splendor of the exterior was matched inside.  There were marble halls and grand staircases.  On the second floor were a library, board room and committee room.   The piece de resistance was the “great exchange or clearing room” on the third floor.  The central section of the room was 60 feet square, with two wings that brought the full length to 80 feet.  “The ceiling is a dome rising 25 feet above the walls.  It is paneled in fire-proof stuff in Renaissance style, and the walls have pilasters of a Corinthian order supporting the cornice and dome…The room is lighted by a great iron and glass skylight, which forms the upper part of the dome,” reported The New York Times. 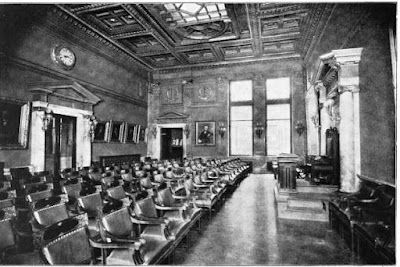 On January 16, 1896 the New-York Tribune opined “The interior staircases are of marble and the interior decorations are unsurpassed in the richness of materials and the beauty of design.”  Following “an unusually sumptuous and elegant luncheon with all varieties and delicacies” served by Delmonico in the Board Room, the hundreds of men present for the dedication “spent the rest of the afternoon in looking through the new building and admiring it,” said the Tribune.  “All agreed that it was an ornament to the city and one of the most beautiful structures to be found anywhere.  Many compliments were bestowed upon R. W. Gibson, the architect of the new structure.”

The Chase National Bank had shared the old Pine Street building with the Clearing House and it moved into the Cedar Street headquarters, as well, as the only tenant. 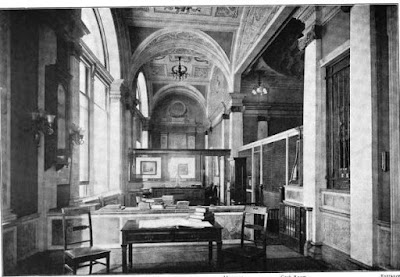 The New York Clearing House had dealt with financial panics and other emergencies throughout its existence.  On August 1, 1914 it faced another.  A headline blazed across the face of The Evening World that day which read “GERMANY DECLARES WAR; ALL EUROPE IS IN ARMS.”  The newspaper reported that bankers had gathered “to keep American gold at home” and ‘to discuss the financial situation and arrange for whatever precautionary steps might be considered necessary to protect the United States form the indirect effects of European war.”

That same day the New York Clearing House received a telegram from Secretary of the Treasury McAdoo which read in part “For the purposes of considering the general situation created by the European crisis and with a view to intelligent co-operation in protecting the interests of this country, I shall be pleased if you will send a committee of your Clearing House to confer with me in Washington.”


It would be just one of the major crises the New York Clearing House would address in the next decades.  Perhaps as a means to calm the panic of readers during the Great Depression, on March 12, 1933 The New York Times published an article entitled “Great Banking Crises That The Nation Has Weathered.”  It recalled the many near-calamities—bank holidays, gold embargoes and the need for Clearing Certificates, among them—and reminded readers that all the “expedients proposed in the past week have been tried during previous emergencies and have bridged the difficulties.”

That crisis was followed immediately by another—World War II.   Although the war precipitated what New York State Superintendant of banks called the need for “greater sacrifices by banks” and the necessity of issuing “ration coupon banking checks,” it also was seen as the way out of the Depression.

At a meeting of 600 bankers presided over by New York Clearing House Association president Herbert P. Howell, Paul F. Cadman pointed out “banking is a war industry par excellence, serving the government as faithfully and effectively as any major branch of manufacture or agriculture.  The banks have sold 80 percent of the war bonds and stamps to date and have expanded their facilities in military and war manufacturing areas.  They have financed war industries, and are supplying credit direct to the government in steadily increasing accounts.”

Just after the end of the war the New York Clearing House faced yet another problem: counterfeiters.  Their greatest antagonist at this time was Alexander D. L. Thiel, described by the Clearing House as “one of the cleverest professional forgers of this generation.”    By the time Thiel was nabbed by two New York detectives Lieutenant Grover C. Brown and Detective Archibald J. Woods in 1946, he had cost banks “close to $500,000.”  In an unprecedented display of appreciation, the New York Clearing House Association presented “illuminated scrolls” to the two men in a ceremony on August 25 that year.

The financial recovery of the nation was evidenced that year when check clearings through the New York Clearing House Association amounted to nearly $365 billion—the highest level since 1930.

In the spring of 1963 the Clearing House Association abandoned its Temple to Finance and moved to new headquarters at No. 100 Broad Street.  Two stories tall, the $1.5 million structure was designed by Rogers & Butler.  In reporting on the move The New York Times mentioned “Much of the original marble and intricately carved mahogany furniture were moved from Cedar Street to the new building.  A set of delicately balanced scales once used to weigh gold dust now is displayed in a glass case.”  The numerous oil paintings move to their new home included the portrait of Francis William Edmonds, chairman of the Association from 1853 to 1855.

Twenty-five days after that article, The Times followed up on May 28, 1963 with the announcement that “a 40-story office building is planned at 140 Broadway in the entire square block bounded by Broadway, Liberty, Nassau and Cedar Streets.”  A new skyscraper, designed by Skidmore, Owings & Merrill, was projected to cost $45 million.

Not everyone was pleased with the death sentence of the old Clearing House.  Fortune magazine featured it in an article entitled “Vanishing Glory in Business Buildings,” saying it had “a profuse façade.”  The Times’ Thomas W. Ennis responded with an article headlined “Architectural Treasures Give Way to Stark Boxes.”

Almost simultaneously, plans were laid for the demolition of McKim, Mead & White’s masterful Pennsylvania Station.   As Ennis pointed out, the city’s Landmarks Preservation Commission had mentioned the buildings “in its listing of notable buildings, and has recorded their history and photographed them.”   Before many months it would be only photographs that survived.

The plans for a 40-story building morphed into the 51-story Marine Midland Building, completed in 1967 and designed by Skidmore, Owings & Merrill’s Gordon Bunshaft.
Posted by Tom Miller at 3:11 AM