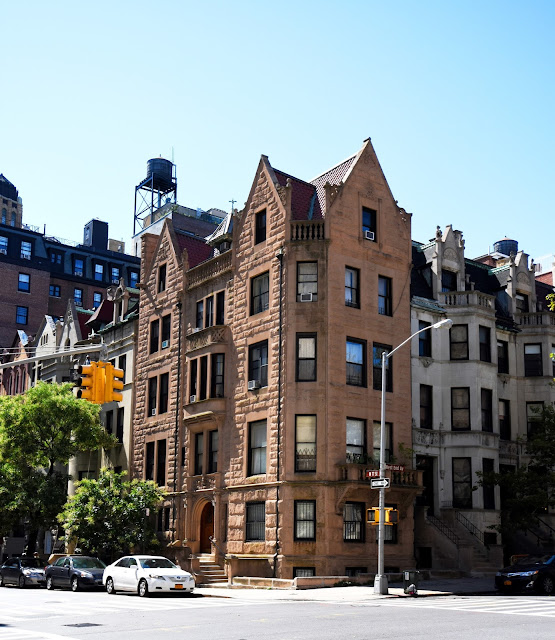 In 1891 Architect Clarence True had only been on his own for six years, after leaving the employ of Richard M. Upjohn.  He may have been regretting the decision, since commissions were relatively scarce.   A year earlier he had finally received a significant contract to design a string of rowhouses for developer Charles G. Judson.

It was the beginning of a flood of commissions which would establish True as one of the most prolific architects in the wildly-developing area and prompt some to later call him the face of the Upper West Side.

Within months True received another commission from developer Francis M. Jenks.   His row of upscale residences would wrap the southeast corner of West End Avenue and 77th Street, stretching from No. 350 to 356 West End, and from No. 270 to 274 West 77th Street. Clarence True drew heavily from historical styles; but he preferred to adulterate them with his own liberal interpretation.  With no compunction about melding two or three styles into an attractive and sometimes playful concoction, he produced mansions and townhouses that managed to be at once elegant and fanciful.

And so it was for the Jenks houses, anchored at the corner by the row’s showpiece.  Although the entrance to the four-and-a-half story house was squarely on 77th Street, it took the avenue address of No. 358 West End.  Clad in rough-cut limestone, it was quintessentially True.  Elizabethan elements co-existed with Romanesque Revival in a romantic manse with tall gables, balconies, and elaborate carvings. 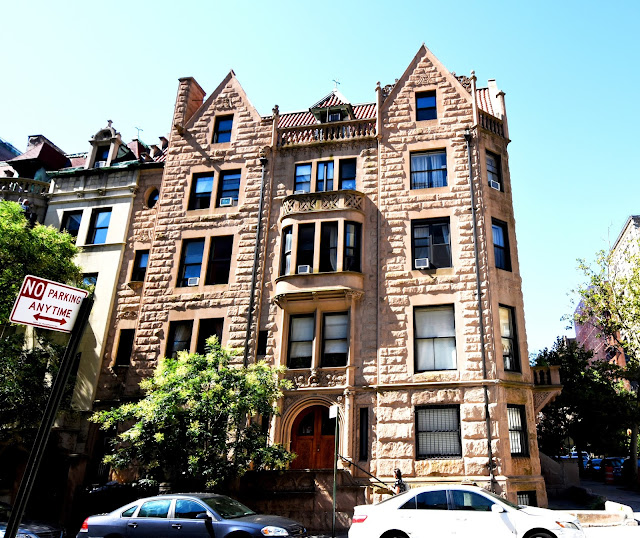 The handsomely carved arched double doors were flanked by Elizabethan style columns, carved in a diamond pattern.  The panel directly above featured the head of a frightening beast contrasted by delicate, swirling foliage.  A stone oriel at the fourth story provided a balcony to the floor above, its stone railing decorated with carved Celtic-like strapwork.

Construction on the row commenced in 1881 and was completed the following year.   As the finishing touches were put on the corner mansion, wealthy broker Alfred Kayne married the contralto opera singer Attalie Claire Smith (known on stage as Attalie Claire) in the Windsor Hotel on Fifth Avenue.  In reporting on the wedding on September 15, 1892, The New York Times noted that Attalie’s veil “fell in deep folds over the skirt from under a coronet of diamonds in the form of a fleur de lis valued at $20,000.”

Alfred’s courtship of the singer caused somewhat of an uproar in the entertainment world a year earlier.  Attalie had shared the stage with the formidable and celebrated Lillian Russell and, as reported in The Times, “It was in Boston about a year ago that [Attalie] excited the jealousy and enmity of Lillian Russell by receiving more flowers from Mr. Kayne and other young men than the star of “La Cigale,” and left the company.”

The newlyweds spent their honeymoon in Newport.  Upon their return Alfred Kayne purchased No. 358 West End Avenue in February, 1893.  As was customary, the title was put in Attalie’s name.   While Alfred carried on business downtown, Attalie continued her stage career, having signed a three-year contract with Colonel Henry Mapleson that began in April 1893.

Sharing the spacious home with the Kaynes was Attalie’s close friend, operatic soprano Lucile Hill, described by The New York Times as “the prima donna of the Metropolitan Opera House Company.”   She had recently returned from an engagement at Covent Garden.

The Peterson Magazine, in 1895, described Lucile as “one of the singers immensely popular within the theater and without, as she has a sunshiny, open-hearted and un-affected temperament that cheers and refreshes.”  And then after that glowing compliment, it went on with a description that would offend most female entertainers today.  “She is a plump little person with a winsome, intelligent face, very youthful and with pretty, regular features.”

The Peterson Magazine added that she “may be seen daily cantering round the corner at Seventy-seventh Street and West End Avenue, on her way for a ride in the park, as she is an excellent horsewoman.”

Alfred Kayne was an avid bicyclist and was a member of the Cyclists’ Touring Club.  But he, like Lucile, was equally interested in horses.   He found himself in hot water with U.S. Customs officials in 1893 over three fine new steeds.

The Times reported on May 19, 1893 “Alfred Kayne, who is rated down town as a man of fashion, is in trouble with the customs authorities over three horses that he brought across the Canada line near Rouse’s Point a few days ago.”  Kayne declared the value of the animals at $145 each, which enabled him to bring them into the country for $30 tariff each, since their value was under $150.

But Special Agent Montgomery was not so sure about Kayne’s low assessment.  He sent two appraisers to examine the horses.  Their separate reports valued them at $1600 and $1010.  Alfred Kayne’s new horses were seized, much to Kayne’s irritation.

As might be expected, the glittering entertainments in the Kayne mansion often centered around music.  On January 17, 1895 The Times reported on one such event, saying the Attalie “gave one of the most enjoyable musicales of last week at her home…The hall and the reception room were profusely decorated with palms, smilax, and American Beauty roses.”  Lucille Hill, of course, sang (“charmingly,” according to the Times’ reporter) as did several other opera singers.

The Kaynes had one daughter.  But their seemingly happy marriage came to a highly-publicized and unhappy end by the turn of the century.  The couple separated and the West End Avenue mansion was sold  to Thomas J. McLaughlin.

In January 1899 Attalie was living with their child in apartments at No. 74 Madison Avenue.  Her maid, was working undercover for Alfred.  Attalie told reporters “She had been carrying tales to Mr. Kayne ever since I took her, through sympathy, into my employ.”

It resulted in Alfred Kayne and his brother breaking into Attalie’s apartments at 2:30 on the morning of Saturday, January 14.  There he found Attalie with a man.  Alfred swept up his daughter and left.

Attalie protested that “When they broke in, Mr. Kaffenburgh of Howe & Hummel, who has my divorce suit in charge, and I were talking about the divorce case.  My husband had no right to act as violently as he did.”  She did not address the question of why her lawyer would be talking business in her apartment at 2:30 a.m.

In the meantime, Thomas J. McLaughlin sold the West End Avenue mansion on March 1, 1901 to Bendet Isaacs and his wife, the former Gussie Finn.  The 36-year old Isaacs had been born in Cincinnati and the couple was married in 1890.  A self-made man, Isaacs had received a public school education.

In 1897 he was still described in directories as a “clothing manufacturer.”  But by now he had amassed a comfortable fortune and was branching out into real estate.  Within the next few years he would become President of the Tuben Realty Co.; an officer in the Trion Toy Co., Inc.; President of the Clifton Construction Co.; and an officer in the Oklahoma-Kansas Refining Co.

Bendet and Gussie had three children, Sidney, Theodore and Hilda.   The couple were active in Jewish philanthropies; Bendet was a member of the Jewish Social Service Association, a director in the Montefiore Home, and a member of the Jewish Protectory and Aid Society.  Gussie was a regular contributor to the United Hebrew Charities, a member of the Hospital for Deformities and Joint Diseases, and the first president of B'nai Jeshurun Sisterhood.

In 1917 Distinguished Jews of America asked Bendet Isaacs “whether it is possible for the Jew to adhere to his religion, and at the same time, serve best his own interests and that of his country.”  He replied “Success in business is absolutely independent of one’s faith.  To be truthful in words and deeds and the people one comes in contact is the only condition essential to success.”

When war broke out the Isaacs’ 21-year old son, Theodore, became a sergeant in the Gas Defence Section.  Unlike his father, he had enjoyed a privileged education, attending Barnard Preparatory School and Cornell University.  Known for his school athleticism, he had excelled in basketball and track.  He died suddenly in St. Luke’s Hospital at the age of 26 on June 27, 1922.

Two years before the tragedy, in November 1920, the Isaacs sold No. 358 West End Avenue to Henry M. Weill.  The Real Estate Record and Builders’ Guide noted on November 27, “After extensive alterations Mr. Weill will occupy the house.”

Weill, his wife and daughter who was studying at Barnard College, moved into one of the newly-renovated residences.   Four years later marital problems boiled over when Mrs. Weill and her daughter stormed into the apartment of former showgirl Peggy Stone early on the morning of June 17, 1926.

Hearing his wife and daughter in the apartment, Henry left the bedroom by the window.  The problem was that Peggy Stone’s apartment was on the second floor.  His embarrassment at being caught in bed with another woman was now compounded by a broken leg.

It was not only Weill’s leg that was broken during the “divorce raid,” as described by police. The New York Times reported “The furnishings in the apartment which included some costly bric-a-brac, were broken or damaged but neither Miss Stone nor Mrs. Weill would say if the damage was caused during the raid.”

Seeing her husband injured played on the wronged women’s sympathies.  “Mrs. Weill said that when her husband leaped to the courtyard she went to his assistance while Miss Stone remained in the apartment.  When she learned that he had been seriously injured she said she did not know whether she would sue for divorce.  She really felt sorry for him, she declared.” 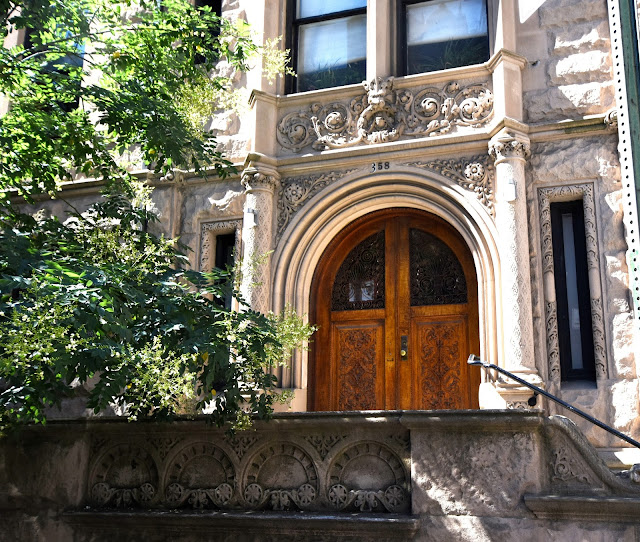 The Weills patched things up in time for Henry M. Weill to deal with another problem.  London artist Alfred A. Wolmark left valuable paintings at the West End Avenue house with understanding that they were “for exhibition only.”

Instead, Weill kept the paintings until Wolmark sued him for $50,000 early in 1928.  Henry Weill protested that he was under the impression “he had an option to buy them for $2,500.”  On February 9, 1928 Wolmark got his paintings back and Weill was directed to pay for the legal costs.

Later that year, on October 29, Henry M. Weill claimed surprise at hearing of an upcoming foreclosure sale on the house.  Despite efforts to “stave off the completion of the foreclosure proceedings,” the Appellate Division allowed the sale of No. 358 West End Avenue in March 1929.  Joseph Weisenfelder, who had held the mortgage, took back his property.

By now the era of the lavish Upper West Side mansions had already come to an end.  Weisenfelder remodeled No. 358 West End Avenue into 16 furnished apartments in 1937.  When he sold the building on June 20, 1940 to Olga Vojtickzky, The Times noted “The new owner also acquired the furnishings”

When Vojtickzky leased the building to Louis Goldberg in January 1943 it was now described as “containing twenty-eight rooms and fourteen bathrooms.”  The well-used furniture was again purchased by Goldberg who said he “will operate the property as furnished apartments.” 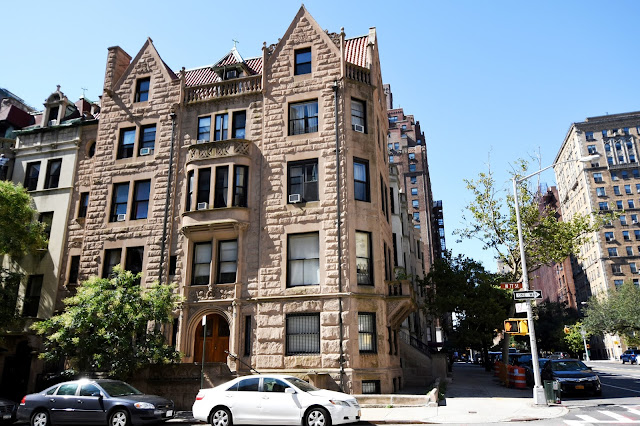 In 1999 the former mansion underwent another renovation that resulted in three apartments per floor.   Outwardly Clarence True’s romantic structure, the parlors of which once reverberated with the voices of opera singers, survives little changed.