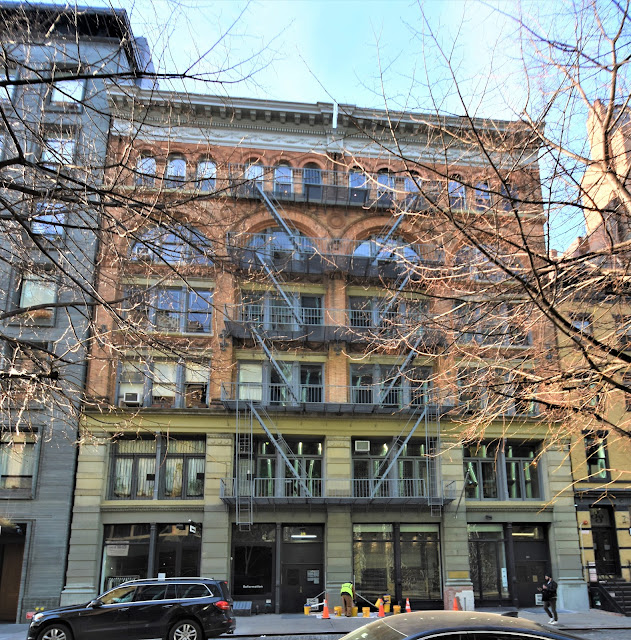 The block of Bond Street between Broadway and Bowery was lined with elegant homes in the 1830's.  Wealthy merchants George Sharp and James Hagarty lived in Nos. 35 and 37 Bond Street, respectively, while Judge William Kent occupied No. 39.  That high-tone residential tenor would be long gone by the last quarter of the 20th century.

In 1892 Havens & Winters purchased the three properties.  The real estate developers were well known for erecting modern factory buildings.  For the Bond Street project they turned to architect Ralph S. Townsend who designed several Havens & Winters buildings.
Townsend produced two identical structures that successfully pretended to be one.  His tripartite Renaissance Revival style structures were faced in brick and stone and lavishly decorated with terra cotta.  Each two-story rusticated limestone base held a storefront.  The brick-faced midsection featured three-story arches.  The panels between the floors were decorated with elaborate terra cotta swags.  Egg-and-dart terra cotta eyebrows above the grand arches sprung from Renaissance faces.  The top floor featured triple arcades below a pressed metal cornice and frieze.
Havens & Winters were developers, not landlords.  On March 11, 1893 The Real Estate Record & Guide noted "Last week builders Havens & Winters sold their recently-completed stores on Bond street."  The journal noted, 'The district is one of the most active in the city now; every new building rents quickly, often in advance of completion, and the demand is unsupplied."
The upper floors filled with apparel firms.  Among them was neckwear manufacturer Berliner, Strauss & Denzer whose massive factory on Elizabeth Street had burned on January 9.  Within a month the firm had relocated to No. 35 Bond Street and on February 4 the management showed its appreciation to brave employees.  The Sun reported that the staff "assembled at 35 Bond street yesterday afternoon to witness a presentation of medals by the firm to employees whose coolness and courage had helped in saving the lives of over 600 persons."
The three young men had, indeed, showed bravery.  The elevator boy, Samuel Bernstein, refused to retreat from the burning building until he had successfully brought all the female employees down.  Another, Solomon Altschuler, rushed back into the offices to close the fireproof safe which contained $40,000 in cash; and Nathan Ullman had directed some of the young females to the roof where they were rescued.
Berline, Strauss & Denzer was undoubtedly the largest tenant in the building.  In 1895 it employed 35 men, five boys under 18 years old, 400 women, and 26 females under 21 (five of them under 16 years old).  They worked a grueling 54-hour work week.
Other early tenants included the start-up firm, the Bloomingdale Company.  In its February 1894 issue The Clothier & Furnisher reported "There is a new concern in the manufacture of specialties in clothing line to be found at 39 Bond street.  Its founder, Larry Bloomingdale, "is ready now for business in garments for the Spring and Summer trade," said the article.  The size of Bloomingdale's operation paled when compared with Berliner, Strauss & Denzer.  In 1896 he was employing just three men.
The other tenants in the 1890's were clothing makers Cohen Mfg. Co., A. Robinowitz, J. Lamkay & Co., and Joseph Carmel & Co.  Unrelated to the garment trade was the Pacific Press Publishing Co., which operated from No. 39 by 1896.
Pacific Press Publishing was edited by Alonzo T. Jones.  It published books and pamphlets, most with a decided religious theme.  Among the books offered in 1899 were Sunbeams of Health and Temperance, Heralds of the Morning, and Almost A Man.  An advertisement for Almost A Man promised, "every boy will read it, and be better for it as was the boy in the story.  It is intended to help mothers and teachers in the delicate task of teaching the lad concerning himself, purely, yet with scientific accuracy."
The firm also published the weekly American Sentinel, "published in the interests of [issues] Religious, Liberty-Christian and Constitutional."  The articles shared a similar theme.  In the September 14, 1899 issue, for example, were articles entitled "Rome Aims to Rule the State," "Papal Titles for Sale," and "Political Religion." 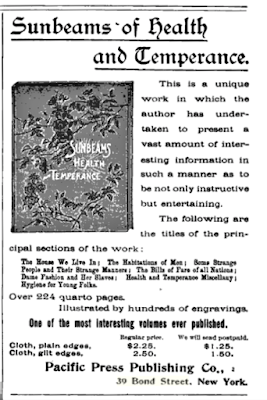 The American Sentinel, July 13, 1899 (copyright expired)
The turn of the century saw a diversification of the tenant list.  In 1901 the ungainly named Standard Cloth Examining, Sponging and Refinishing Works was here, employing 11 men who worked 59 hours per week.  Restoff & Bettman, manufacturers of "leather dressings" occupied space in 35 by 1905, and advertising agent Martin J. Ott's office was here in 1907.
Ott found himself in hot water on April 1 that year.  He was at a an office in No. 28 Ann Street where an illegal horse betting operation, known as a pool room, was conducted.  Suddenly Police Captain E. J. Toole and six detectives rushed in.  Ott was among those arrested, charged with aiding and abetting a poolroom.  It was no doubt a humiliating incident for him, and one which could be damaging to his professional reputation.  The New-York Tribune said "A large crowd watched the men being put into the patrol wagon."
Clothing manufacturer Jacob Cohn had operated from No. 39 as early as 1896.  His was a modest business with a staff of only about ten.   For several months in 1910 orders of cloth to be made into clothing mysteriously disappeared before making it to Bond Street.  On December 12 the New-York Tribune reported "Cohn has been missing bills of lading for goods shipped over the New York Central and other railroads.  Detectives discovered that the original bills of lading for shipments of goods to Cohn had been presented and the goods delivered."
When the freight depot turned over the signed bills of lading to detectives, they showed Jacob Cohn's signature--except "Cohn said the signatures on the bills were forgeries."  Investigation soon focused on the 19-year old office boy, Abe Silverberg.
As it turned out, the teen had been "impelled by one man to open letters and purloin bills of lading," explained the New York Press.  He would deliver them to Moses Trosky, who then signed the documents and claimed the freight.  The incentive was hard to resist.  Following Silverberg's arrest on December 18, Detective David Brown told reporters that "Not long ago...Trosky handed him $70 as his share of the loot.  Silverberg had $30 when arrested."  The $70 would equal nearly $2,000 in today's money.
The first decades of the 20th century continued to see a mix of tenants.  In 1917 the Columbia Dye Works, Inc. was in No. 39.  When a client failed to pay its invoice in August 1917, the firm sold the finished goods at auction--"2,000 opposum skins, dyed black." 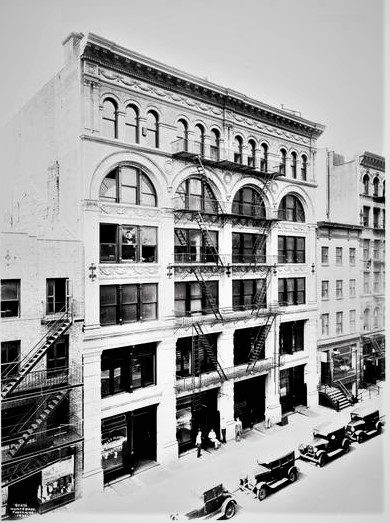 The appearance of the buildings in 1932 is essentially unchanged today.  Photo by Wurts Bros. from the collection of the Museum of the City of New York
In 1922 the start-up firm of Israel Brothers, manufacturers of "fabric and imitation leather belts," opened in No. 39.  Other tenants of the buildings in the 1920's included the Boston Ladies' Hat Company, the Exclusive Hat Frame Company, and the American Mirror Works.
Mid-century saw a more industrial type tenant.  Greenwich Village Plumbers Supply, Inc. moved in in the mid-1950's and remained through 1997.  But the last quarter of the 20th century were dark days for the neighborhood.  Most of the building sat vacant throughout the 1970's.
But little-by-little the block revived as artists discovered the Noho neighborhood.  In 1973 photographer Harold Feinstein rang a ten-week creative photography workshop in his studio in No. 39.  The course, open to beginners and advanced students, cost $100 (a little more than five times that much in today's dollars).
In 1977 the Carat Conway Dance Studio opened.  It staged works like the 70-minute work "Zero As A Value" presented on December 19, 1980.  The Villager described it as "a trilogy comprised of a monologue, a film and a dance that become interwoven."
In 1994 the buildings were joined internally and the upper floors converted to joint living-work quarters for artists, just two or three sprawling spaces per floor.  In 2000 the Soho shop Peter Roberts Antiques relocated to No. 39, and shortly after Modernlink furniture store moved into No. 35.   Lobel Modern Gallery replaced Peter Roberts Antiques in 39 around 2007. 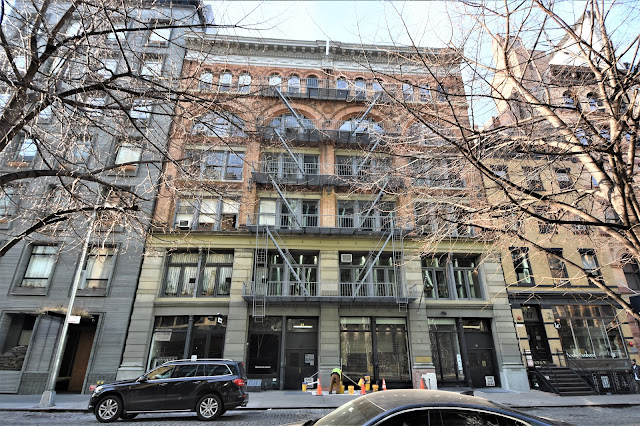 After its more than 125 years, Ralph S. Townsend's handsome commercial structure continues to be a handsome architectural presence.
photographs by the author
Posted by Tom Miller at 1:17 AM