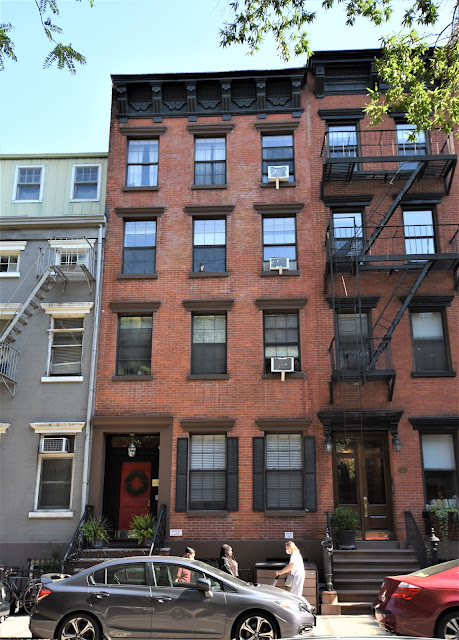 Before the addition of a full fourth story, the third floor attic level matched that of the house to the left.
Around 1842 a row of brick-faced Greek revival homes were erected along the north side of West 16th Street between Seventh and Eighth Avenues.  Each was two full stories tall with a squat attic level.  A stone stoop led to the entrances above the brownstone basement level.  In October 1845 an advertisement appeared in the Morning Courier and New-York Enquirer that read:

To Let--The modern built two story and attic House, No. 153 West Sixteenth street, between the 7th and 8th avenues.  The house was newly painted last spring, has marble mantelpieces, and Croton water throughout.  Possession given on or before the 1st of November.  Rent $300 per annum.  The furniture in said house will be sold cheap for cash.


The monthly rent would equal about $875 today.

John Jacobus Van Buren Westervelt answered that ad.  He had married Phoebe Ann Bogert four years earlier on Christmas Day 1841.  Born in Old Tappan, New Jersey in 1804, he served as under sheriff of the city and county of New York in 1842 and was elected sheriff in 1846.  His and Phoebe's first child, Leonora Kirby, was born the year they moved into the 16th Street house and they would have six more.

Westervelt's duties as sheriff were varied, ranging from collecting fines to participating in coroner's inquests and in executions.  On July 20, 1849, for example, Matthew Wood was executed for the murder of his wife by poison.  A small crowd of 150 was admitted to the prison yard downtown to view the hanging.  The New York Herald reported "About 20 minutes past 12 o'clock, the death procession rounded the northwest corner of the prison; and advanced slowly and solemnly to the place of execution.  The sheriff, Mr. John J. V. Westervelt, and the under-sheriff, Mr. James C. Willet, were linked together, and both wore cocked hats and swords."

The Westervelt family remained in the house until the early 1850's, after which time it was shared by two families, that of David Morris (who listed no profession), and Charles S. Oakley, a "weigher."  He double-checked the weight of freight being unloaded on the East River docks.

One of the families had moved on by March 10, 1856 when an advertisement offered:

To Let--To a small, respectable family the upper part of the three story brick house No. 153 West Sixteenth street, consisting of four rooms and pantries on the second floor and two rooms on third floor, with bath room, gas, and a spacious yard; rent $260 per annum.


The monthly rent for half of the house would be about $650 today.  The new tenants were the family of Conrad Braker, Jr., who listed his occupation as a clerk at No. 142 Water Street.  He received a promotion the following year, possibly even being taken in as a partner, now listing his profession as an importer.

By 1861 Mary Leamy, the widow of Edward Leamy, leased the house from Antoinette Camp and operated it as a boarding house.  Her boarders were working class, like Adrian Graf, a gasfitter; Robert McVicar, a clerk; builder James Dunn, and another widow, Ann Ferrell.

Graves was in the produce business, the principal of T. M. Graves & Co. located in the Washington Market.  He and his wife, Rachel, had an adult son who moved into the house with them.  William M. Graves was a city marshal.

The next tenants of Thomas and Rachel Graves were the Prindle family.  James E. Prindle was a clerk and Elisha W. Prindle made his income as a watchman (the equivalent today of a security guard).  The Prindles were still sharing the house with Rachel Graves in 1880, following the death of Thomas A. Graves.

Rachel sold No. 235 West 16th Street in February 1882 to Thomas H. Cook.   The house received an updating in the summer of 1884 when architect A. Templer was hired to raise the height to four full floors.  Rather remarkably Templer perfectly matched the brick color and recreated the original lintels.  An especially handsome cast metal cornice brought the vintage house up to date.

Cook would retain ownership of the house into the 20th century, however he did not live here.  It was again operated as a boarding house, its residents being slightly more affluent than in the past.  In 1901, for instance, Dr. Cavanaugh, an ambulance surgeon (what today would be called an EMT) at St. Vincent's Hospital; and Ralph B. Simmons, an insurance adjuster with an office on William Street were boarders.

The widow of Peter Reilly and her son, James, moved in within a few years.  Mrs. Reilly was born in Ballylongford, Ireland.  In 1916 James enrolled in Fordham University, but when World War I broke out, he went overseas with the Fordham Ambulance Corps.  Shortly after his unit arrived in France on August 22, 1917 he was transferred to the French Army.  A year later, on June 20, 1918 the 19-year old's name appeared on the "wounded in action" list.

Reporters came to the 16th Street house to interview his mother.  The feisty woman did not hold back.  "I am glad to know that 'Jimmy' is wounded and not captured by the Huns," she said.  "I would enlist myself, if they would take me, and fight hard to kill the Kaiser or catch him alive."  She went on to say "He is the seventh of my family to be fighting in France.  I have three cousins and three nephews over there."

Jimmy Reilly seems to have come home safe and sound.  His mother was still living in the 16th Street house when the funeral of his aunt, Mary Keane Tsumas, was held here.

Michael and Italia Mareaca purchased No. 235 in July of 1924.  They lived in the house, but as had been the case for decades, leased rooms.  Among the residents in 1933 was James Walsh when he put himself in a dangerous situation.

The Yonkers newspapers The Herald Statesman explained that he tried to cross Central Avenue through the rush of traffic following the last race at the Empire City race track on Saturday July 15.  Halfway across he found himself trapped among a swarm of moving automobiles and "jumped for the running board of a car operated by Arnold Schwartz."  But he was unable to hold on for long and "fell to the street, suffering contusions of the left thigh and leg, and abrasions of the hands."  He was held at Yonkers General Hospital.

Resident Thomas Costa's name appeared in newsprint for more serious reasons on May 18, 1938.  Costa was a known thug who ironically had been a policeman until his dismissal in 1925.  He was sentenced to Sing Sing in 1928 on a conviction of extortion, and was sent back in 1930 for parole violations.

In the spring of 1938 detectives were investigating "a wave of extortions and attempts at extortion by persons operating in the midtown area in Manhattan," reported The New York Sun.  On May 17 the 39-year old Costa and his two accomplices, Albert Masone and James Gualtieri, were arrested and charged. 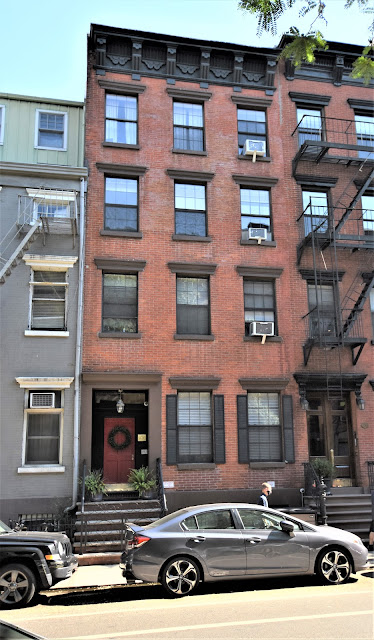 The house was officially converted to apartments in 1986--one per floor.  Today a brick stoop replaces the original brownstone and the entrance had been remodeled.  But overall No. 235 (given the catchy name The Chelsea Flats) looks much as it did after Thomas Cook made his substantial renovations in 1882.

photographs by the author
Posted by Tom Miller at 1:11 AM