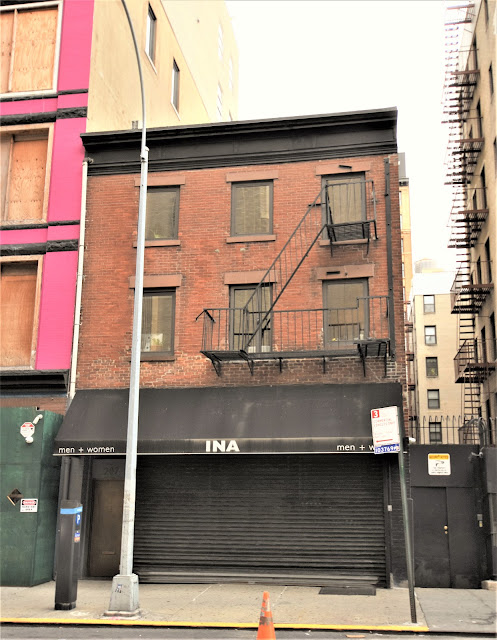 Born in Yorktown, New York on July 7, 1816, Edson Horton listed his occupation as a "carman" in the mid-1850's.  Most likely he owned and operated a delivery firm, rather than merely being a driver, for he was affluent enough to afford the three-story home at 129 West 18th Street (renumbered 207 in 1868), just west of Seventh Avenue.  Faced in running bond red brick and trimmed in brownstone, the Greek Revival residence would have had a short stoop.   The offset openings suggest that a horsewalk, or passage to the rear yard, tunneled through where the current ground floor entrance is.
Horton and his wife, the former Amanda M. Strang, had two children, Herbert, born in 1848, and Anthony born two years later.  Like many families they took in boarders.  The number of them, often around four, suggest that some of them lived in the smaller building in the rear yard.
Several of the Hortons' boarders stayed on for years, like Stephen Smith, who was listed as a clerk in 1853 but had advanced to "soaps" in 1855.  He would remain at the address for more than two decades.  His business on Washington Street would expand to "fancy soaps and blueing" by the 1860's.
The other boarders in 1855 were William Gilmore and James Riddle, both carman; and James Gillespie who either had no profession or stubbornly refused to list it.  Gilmore and Riddle were quite possibly employees of Horton.  Like Smith, Gillespie remained here for years, at least through 1868.
In the spring of 1869 Edson's sister, Phebe Jane Fowler, came from Yorktown for a visit.  What was no doubt a joyful reunion turned devastating when the 43-year old died in the house on May 30.  Her body was transported back to Westchester County for the funeral and she was buried in the Presbyterian Ground in Yorktown, where Edson and Amanda would also be interred in 1891 and 1896 respectively.
The Edsons sold No. 207 to Robert J. Kay around 1872.  Kay was a partner in James Kay & Co., butter dealers at No. 135 Washington Street.  He and his wife, Sarah, inherited two of the Edsons' boarders.  Stephen Smith was still here, as was carpenter Alexander McFarlane, who was first listed at the address in 1867.  The other two boarders in 1872 were Charles Mason, a driver, and James Clayton, a tailor.
Robert and Sarah welcomed a baby boy in August 1872.  Tragically, Henry Estwick Kay died only five weeks later.  Friends and relatives filed into the 18th Street house on September 25 for the infant's funeral.
James Collins purchased the house by 1887.   He had brought his wife and daughter from Philadelphia presumably to open a branch of his business here.  Like their predecessors, the Collins took in boarders.   In 1887 the colorful bachelor Charles W. Gardner took rooms.  The arrangement was most likely a result of his and James Collins's mutual memberships in the Munn Lodge No. 190 of the Freemasons.
Gardener fashioned himself as a private detective.  He was the right-hand man of reformist minster Rev. Charles Henry Parkhurst, the president of the New York Society for the Prevention of Crime, better known as the Parkhurst Society.  Parkhurst and Gardener would disguise themselves and haunt the most sordid streets of New York, gathering evidence of brothels and "vile resorts."
When a romance began blooming between Gardener and Florence A. Collins, her father may not have been overly enthusiastic.  Gardner was not only eight years older than his teen-aged daughter, but was divorced.

During a period when Dr. Parkhurst was being accused of frequenting brothels for his own lascivious gratification, Gardner left the Parkhurst Society to join the Sabbath Observance Society.   James Collins was in Philadelphia on May 14, 1892.  Gardner was having lunch at the Astor House when he suddenly decided to marry Florence immediately.  According to The Press, "He chopped his fork suddenly, jammed his hat on, hurried to the Bennett building, rushed in upon [Stephen W.] Brague and asked him to act as a witness.  Brague was willing and was told to be at the Liberty Island boat at 3 o'clock."

What followed was what The Press called "a queer wedding."  Florence and her mother, the Rev. A. H. Cladin, Gardner and Brague, took the ferry to the Statue of Liberty.  They climbed to the head and waited patiently for a break in the line of tourists.  When it came, the clergyman said "Now is the time."  The New York Herald reported "They were standing in the chin of the statue directly over the jugular vein, but the bronze goddess didn't seem to mind it in the least.  The ceremony didn't take more than five minutes and it was just over when more visitors arrived."  The bride was 18-years old and her husband 26.

Five months before the unorthodox ceremony the 18th Street house had been the scene of a funeral.  The family of Wilmot M. Dunning also boarded in the Collins house.  Born in Middletown, New York in 1833, Dunning had come to New York City as a young man.  He served in the Civil War, earning the rank of captain.  Immediately upon returning to New York he found a job with the Erie Railroad.  The 59-year old caught a cold early in 1892 which worsened to pneumonia on January 13.  He died in the house five days later.
Lormain Vetter rented rooms here by 1896.  The 55-year old had worked as a blacksmith for the Knickerbocker Ice Company for 28 years.  But his health failed that year and he was forced to quit his job.  According to his son, William, he "had become melancholy and despondent."  On Sunday morning, February 20, 1897, Vetter was struck and killed by an elevated train at the Cortlandt Street station of the Sixth Avenue line.
Suicide in the 19th century was considered ignominious and reflected badly on the surviving family.  Members routinely covered up the act publicly.  The New-York Tribune reported that William Vetter "says that his father had become weak from illness, and was clumsy in his walk as a consequently.  He thinks that his father stumbled and fell in front of the train."

In 1920 the building's owner converted the ground floor to business.  The top two floors were now described in Department of Buildings documents as "storage."

A subsequent renovation completed in 1984 resulted in a duplex apartment above the store space.  For several years, at least from 1991 through 1996, the store was home to a branch showroom of Home Works.  The firm sold kitchen and bathroom cabinetry and fixtures.

Home Works was followed by Lobel Modern, run by Evan Lobel.  Its offerings were described by Stephen Treffinger of The New York Times as "an unusual mix of midcentury modern originals."  Decorators could find items here like the pair of 1950's ceramic lamps fabricated in Italy which were priced at $2,200 in April 1999. 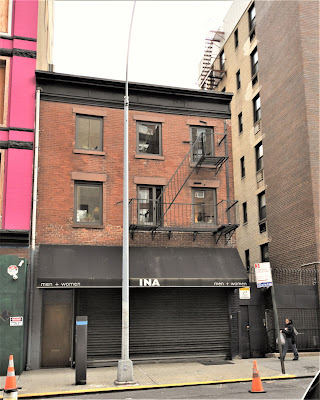 The clothing store Ina, one of four shops in Manhattan, was in the space by 2012 and still remains.