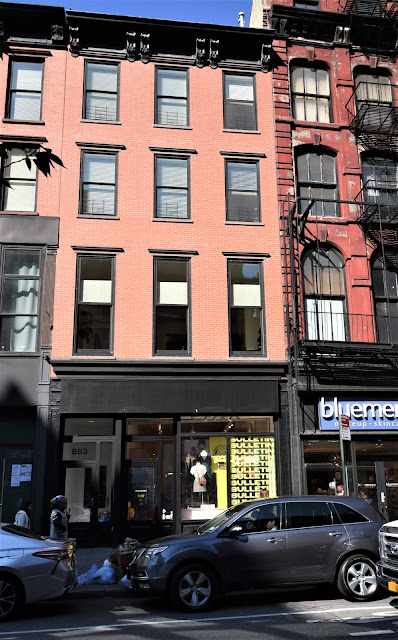 In 1841 work was well underway to make Union Square among the most exclusive residential enclaves in the city.   Elegant iron fencing encircled the park and within the year its decorative fountain would be completed.  Fine brick-faced homes were already rising around the landscaped square.  That year John Ferris began construction of his fine home just north of the park, on the west side of Broadway between 17th and 18th Streets.

Completed in 1842, it was designed in the Italianate style.  Twenty-three feet wide, it would have had a stone stoop that led to the entrance above the English basement.  Simple brownstone lintels capped the openings and a handsome bracketed cornice crowned the design.

It is unclear how long Ferris lived here, but before 1853 Peter Gilsey owned the house.  Born in Denmark in 1811, he arrived in New York in 1837 and entered the tobacco trade.  As the Union Square neighborhood developed, he recognized the potential and invested heavily in properties.  Along with No. 863 in 1853, he owned properties at Nos. 130, 169, 337, and 693 Broadway.  Whether he ever lived in No. 863 is questionable.  On January 6, 1853 The New York Herald reported he had received $38,000 in rents on his Broadway properties (about $1.1 million today) the previous year, suggesting he leased the house.

In the early 1860's the house was operated by Sophia C. Weesells as a boarding house.  In 1863, with the Civil War raging, she leased rooms to newly-organized The Loyal Publication Society.  The organization was formed to bolster support for the Union cause by disseminating pro-Union news articles and editorials.  Its goals, established at its first meeting on February 14, 1863 stresses the distribution of such material "in the Armies now engaged in the suppression of the Rebellion," in order to bolster soldiers' spirits.


One of Sophia's boarders in 1865 was W. W. Brome, a merchant, who barely escaped death in his bed on December 20 that year.  Three days later The New York Times wrote "A most determined attempt at murder was made by a colored errand boy named Edward Brown, 16 years of age, on Wednesday morning last, who endeavored to kill his late employer, Mr. W. W. Brome, while asleep in his room at No. 863 Broadway."

The problems between the two had begun the Saturday before when Brown returned from an errand.  He explained to police, "Mr. Brome accused me of stealing some of his papers.  I told him I did not take them, when he said he did not want me any more."

The teen was infuriated at being accused of theft and being fired.  And he was even more concerned that Brome would file charges against him.  "I made up my mind that I would do something to him so that he would not make a complaint against me," he said.

The following Monday morning before dawn Brown went to No. 863 and found the street door open, but when he made his way to Brome's room, he heard him stirring.  So he retreated and went back home.  He tried again the following day, with the same results.  When he came back on Wednesday the door was locked, so he managed to climb atop a shed in the rear and gain entrance through a window.

He found Brome asleep in his bed and struck him in the head with a hatchet.  He dropped the weapon to the floor and, before fleeing, grabbed $35 in cash and a check for $100 sitting on a table.   The Times explained that he "was so nervous and hurried in his movements that the blow was not sufficient to kill, although it inflicted a very severe wound."

Brome's cries aroused the other boarders, but before they made it to his room Brown had escaped.  He fled to his sister's home in Dobbs' Ferry where he hid out.  He destroyed the check rather than attempt to cash it and be caught.  But it only took detectives a day to track him down.  The Times reported "Brown at first stoutly denied any participation in the crime, but was finally induced to confess to the facts."  Of the $35 he had stolen (about $557 in today's money) he had $16 left.  The article noted "The injured gentleman, Mr. Brome, is under medical treatment, and will recover in time, although the wound is a very painful and severe one."

At the time of the attack stores were invading the previously exclusively residential neighborhood.  In 1869 the basement level of No. 863 was converted to a store, home to the "fancy goods" store of Friend Pitts.  As Christmas neared that year he advertised in The New York Herald:


An Elegant Present for the Ladies.  The Cuban Cascarilla is the best powder for the skin; can be used instead of soap; removes pimples and freckles; an excellent dentifrice, inoffensive, and a sure remedy for the heartburn.

After Friend Pitts suffered a rash of break-ins he hired a night watchman.  Unfortunately for Pitts the man was either a coward or a fool.  On the night of Friday, May 5, 1871 burglars broke in.  But instead of confronting the intruders or finding a policeman, the watchman ran five blocks to Pitts's house to tell him.  The New York Herald reported "Mr. Pitts not being in at the time, the watchman waited for him, and by the time they reached the store the burglars had decamped."  They had made off with goods worth the equivalent of $23,000 today.  The newspaper noted "Mr. Pitts has only occupied this store two years, and this is the fifth time it has been broken into."

It may have been his bad luck with burglars that prompted Friend Pitts to relocate further north to the corner of Broadway and 33rd Street in May 1875.  If so, his bad luck followed him.   On January 16, 1876 The Sunday Telegram reported that thieves had broken through a sidewalk grating, entered the cellar, then "cut through the floor, into the store occupied by 'Friend Pitts.'"  They escaped with $1,000 in gloves and lace--a loss of more than $24,000 in today's dollars.

That year the photographer J. A. Taylor leased space for his studio in No. 863, and the office of Simmonds & Brown, dramatic agents was here as well.

Major change came on May 1, 1886 when the owner, Maturin Livingston, rented the building to John Seys Huyler.  The following month Huyler hired architect George Halbert to alter the store for his candy shop.

Huyler's father, David, ran a bakery and ice cream shop on Jane Street in Greenwich Village.  While working in the shop as a teen, John began experimenting with making chewy molasses candy.   He opened his first shop in 1876 age the age of 30, and in 1881 incorporated the business as Huyler's, Inc.  By now it was a recognized name in the candy business.  While No. 863 was his main store, he had two others in the city and one each in the fashionable summer resorts of Newport, Saratoga and Long Branch, New Jersey.

By the end of the 19th century John S. Huyler had garnered a substantial fortune.  He used his money and time for public good, serving as president of The Water Street Mission and donating donating $15,000 "to promote the work of the Christian Associations of Syracuse University" in 1902, for instance. 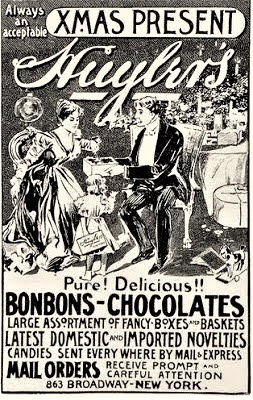 Decades later, on March 16, 1929, Ernest Gruening reminisced in an article in The New Yorker "To 23rd Street and vicinity in the early nineties, Huyler's meant just one place--on Broadway, near Eighteenth St...It was the custom among a great many to enter Huyler's bent on the purchase of a quarter of a pound of mixed chocolates and bonbons, and while waiting sampling the candies.  Sometimes the wait would be so long, and the candy so filling as one sampled, that one did not make the purchase.  One fine day Huyler's covered its candies with glass cases.  'Tasting around Huyler's,' was no more."

The popularity of Huyler's candy and ice cream parlor was evidenced when the Confectioners' and Bakers' Gazette announced the opening of a shop across the street on June 10, 1900.  "A comparatively new bakery and lunch room is Conrad's, at 864 Broadway, nearly opposite Huyler's main Broadway store.  It is superfluous to say anything of this latter great establishment.  Huyler's, for whoever has had experience with the crowds in the place on a summer's afternoon will never forget it."

John S. Huyler died at his country home in Rye, New York on October 1, 1910 at the age of 65.  In reporting on his death newspapers focused as much on his philanthropy as on his tremendous business success.  The New-York Tribune noted "It is safe to say that he contributed in the course of his life more than $1,000,000 to many causes which he though deserving of support."

Huyler and his wife, the former Rosa Lee, had had four sons--Frank DeKlyn, David, Coulter and John Jr.--and a daughter.  Frank was 30-years-old at the time, and their youngest, John Jr., was 15.  Their daughter had died two years prior to Huyler's death, leaving two grandchildren.  The New York Times noted "His estate is probably worth many millions, perhaps ten, perhaps twenty."

Huyler's will gave his sons equal shares in the candy business.  He had already groomed them, according to National Magazine the following year.  "During his lifetime this far-seeing father planned the conduct of his candy and chocolate business by starting each son in a different branch of the business and at the bottom of the ladder."

But there may have already been tension among the brothers.  The article pointed out "At the time of John S. Huyler's death a stray newspaper clipping conveying the sentiments of a family 'pulling together' was found among his valuable papers in the vault--a silent and powerful message to his sons."

Young John Jr. was a freshman at Princeton in 1912.  On December 19 that year the 19-year-old went to Morristown, New Jersey to attend a debutante dance at the Morris County Golf Club.  Afterward he spent the night at the home of a friend, Charles Delmonico.  The next morning John, Charles and another friend walked to the train station.  While his friends boarded the train, John stopped to buy a newspaper.  As he rushed for the train, the dealer called him back to retrieve a dropped coin.  That small delay ended in tragedy.

By the time he picked up the coin the train had starting pulling away from the platform.  John ran with his suitcase and grasped a rail.  The Sun reported "He jumped and thereafter either his foot slipped or the bag overbalanced him."  The teen fell beneath the train, which severed both legs.

John remained calm and alert as he even helped apply tourniquets improvised by baggage ropes.  When an ambulance was delayed, he suggested an express wagon.  But despite what newspapers called "his grit," he died later that morning.

If John Sr. had been concerned that his brothers were feuding, he was proved right in 1916 when David sued his other brothers for control of the company.  The New York Times commented on October 20 "The fact...that David Huyler has not been on speaking terms with his two brothers for months, became known yesterday."  According to David, his brothers had gotten controlling interest by "trick and device" and had ousted him as a director, as treasurer, and factory manager.

Huyler's was purchased by a syndicate in December 1925.  In 1949 the former candy store was renovated for a restaurant.  A store operated from the second floor and Department of Buildings stressed that the upper floors were to remain "permanently vacant and unoccupied." A renovation completed in 2009 resulted in a commercial space at ground level and two apartments above--a duplex and a triplex.   Today a clothing store operates from Huyler's candy parlor, once a famous destination and today completely forgotten.