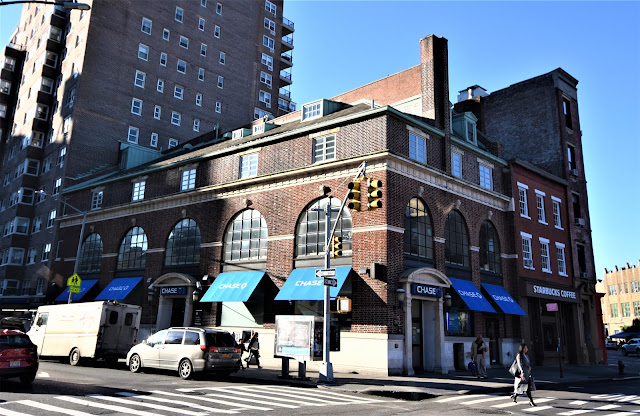 Founded in 1853, Corn Exchange Bank had gobbled up other banking institutions like the Astor Place Bank, the Home Bank and the Washington Trust Company by 1919 when it looked to Greenwich Village as the site of a new branch.   On March 19 that year The Sun reported that the bank had purchased "the property at 76 Grove street, and 7, 8, and 9 Sheridan Square" as the site of its 42nd branch.  The plot, it said, "faces the new subway station of the Seventh avenue subway, and the modern and attractive Greenwich Village Theatre."

By the time of the newspaper's article The Corn Exchange bank had hired architect S. Edson Gage to design the structure.  He worked with an oddly-shaped plot, more than 91-feet long on Sheridan Square (later West 4th Street) and just 15-feet on Grove Street.

Gage's post-war take on neo-Georgian  gave a nod to the city's early architectural history.  Faced in variegated red and gray brick laid in Flemish bond, it was trimmed in marble.   The entrances were capped by bold arched pediments and the massive arched openings of the second floor wore scrolled keystones.  A marble frieze and cornice separated the third story, where especially handsome carved and paneled window lintels graced the windows.  Gage joined the pitched roofs of both sides, creating the illusion of a hip roof.


Until the second half of the 20th century firms would pay their employees in cash.  Workers received a pay envelope each week.  It was a practice that allowed employers to coldly let a worker know he had been fired by inserting a pink slip into his pay.   It also required at least one officer worker to make a bank run every week to withdrawal the large amounts of cash--making him a target for thieves.

Such was the case just before noon on August 11, 1928 when the cashier of the Arthur R. Purdy Iron and Metal Work Company on Greenwich Street walked out of the Sheridan Square branch with the company's payroll.  The routine of A. E. Gleason had most likely been watched for weeks, and as he entered the hallway of the firm's building, he was attacked by two men, one armed with a pistol.  Although it was not an enormous payroll, the bandits nevertheless made off with the equivalent of $8,800 today.

In 1929 S. Edson Gage was called back to enlarge the bank by slightly doubling its width on Grove Street.  His nearly seamless addition was separated from the original building at the roof level by a tall chimney and wall.  Their purpose was most likely to disguise the additional full fourth floor of the new structure, slightly higher than the original.  Behind its two copper clad dormers were two "non-housekeeping apartments."  The term meant that they had no kitchens.

The nation was captivated by the sensational kidnapping of the 20-month-old son of aviator Charles Lindbergh in March 1933.  Before the ransom was paid, the F.B.I. recorded the serial numbers of the bills.  One of them would turn up in the Corn Exchange Bank's Sheridan Square branch and provide critical evidence.

Cecelia M. Barr was a cashier in the Loew's Sheridan movie theatre on Seventh Avenue at West 12th Street.  At 9:30 on the night of Sunday, November 26, 1933 Richard Hauptmann stepped up to her window and threw a folded $5 bill at her.  The next morning the assistant manager of the theater took the night's receipts to the bank.

Teller William Cody--along with employees of grocery stores, insurance agencies, gas stations, airports and such--had been given a pamphlet warning to watch for the ransom bills, along with a listing of the serial numbers.  The sharp-eyed teller discovered that the $5  bill Barr had received from Hauptmann was one of those marked by the FBI.

The collection of circumstances led Cecelia Barr to distinctly remember the man among the 1,500 patrons that night, and to describe him to Federal authorities.  She later recounted “He took the bill out of his watch pocket and threw it at me.  That naturally made me look up—the way he did it.”  Other factors made her take notice of Hauptmann.  He was late for the screening—she was even counting her receipts, not expecting anymore patrons—and although it was a cold night, he wore no overcoat.  The third reason, other than the tossing of the bill, was the way it was folded.  “The bill was folded in eight parts as if it had been taken from a watch pocket.  I had to unfold it myself,” she later testified.

The evidence and Barr's testimony partly let to Haupmann's conviction and execution.  She received a $1,000 reward in January 1938.

Crime was not restricted to the banking floor.  Upstairs were the offices of Ragwomen Distributors, founded to supply newsstands with feminist periodicals, like the  women's bi-weekly newspaper, the Majority Report.  In February 1975 criminals broke in, and stole typesetting equipment and financial records.  It was more than a case of burglary, however.  An employee, Nancy Borman, told reporters that "bright orange paint was sprayed on the walls."

While the neighborhood around it has seen significant change since 1919, S. Edson Gage's dignified bank building has survived virtually untouched; a striking presence on the high-profile corner.