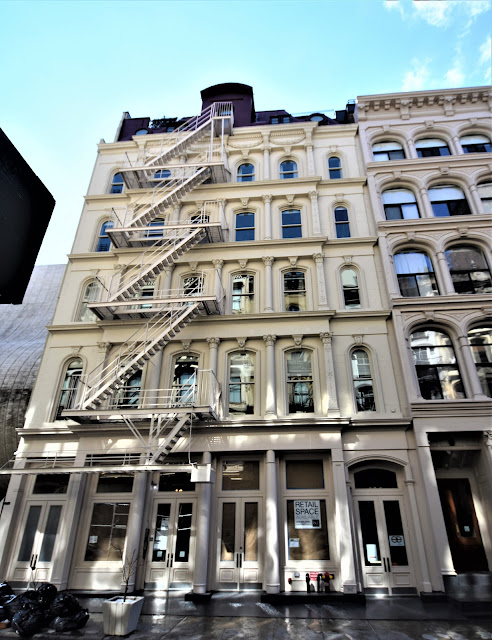 In 1836, at the young age of 24 Enoch Redington Mudge became manager of the lavish Astor House Hotel.  Four years later he opened his own hotel, the St. Charles Hotel, in New Orleans, "amassing a fortune," according to The Philadelphia Inquirer decades later.  Mudge's son, Charles, was killed at the Battle of Gettysburg.  Before the end of the war the Mudge family had moved north and Enoch partnered with Joseph D. Sawyer to form the drygoods business E. R. Mudge, Sawyer & Co.

In 1866 Mudge purchased the two small structures at Nos. 43 and 45 White Street and commenced work on a new building.  Designed in the newly-popular French Second Empire style, its cast iron base supported four floors faced in stone and a stylish mansard.  Construction would not technically be completed before 1868; but E. R. Mudge, Sawyer & Co. had moved in well before then.


E. R. Mudge, Sawyer & Co. was a commission merchant for several mills.  An advertisement in The Chronicle on July 6, 1867 touted "Cotton Flannels For the Season of 1867":

The situation of the trade is specially invited to the new production for the season of 1867, sample cases of which are now ready for inspection at our store, 43 and 45 White street. 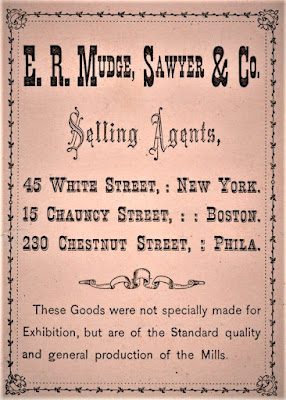 E. R. Mudge, Sawyer & Co. established its headquarters in Boston.  There Mudge moved his family into a mansion on Beacon Street and purchased a 100-acre summer estate in Swampscott, Massachusetts.  The New-York Tribune, on August 6, 1874, called it the "finest estate in town."

Mudge donated a striking Romanesque Revival style church to the nearby town of Lynn, Massachusetts in memory of Charles.  Construction began in 1880 and the cornerstone laid in May 1881.  But Mudge would not see its completion.  Three months later, on October 3, The Philadelphia Inquirer reported that Mudge, "a leading commission merchant in cotton and woolen goods, and head of the firm of E. R. Mudge, Sawyer & Co., of Boston, New York and Philadelphia, died of apoplexy at his summer residence in Swampscott, Massachusetts."  He was 69-years old.  His funeral was held in St. Stephen's Church, still under construction.

Upon Mudge's death the firm was liquidated.  In March 1882 the Mudge heirs sold the White Street building to the estate of James C. Ayer.  It was a costly transaction, the $183,750 sale price equal to more than $4.6 million today.

Around the turn of the century commission merchants Hesslein & Co. were leasing the building.  The firm listed itself as "importers, general commission, trading, exporting, importing and mercantile and manufacturing textiles."  It would remain in the building for decades.

The Ayer estate still owned the building in 1939 when it modernized the cast iron storefront with a stucco surface.  The renovated store and the floor above was leased to the textile firm The Central Processing Corporation the following year.

At mid-century a variety of tenants filled the building, including Mae Marie, Inc., apparel makers, and the New York Sun Transporters, Inc. 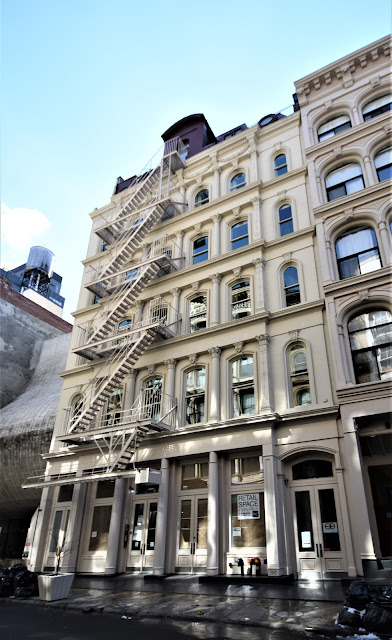 The Tribeca renaissance caught up with the E. R. Mudge, Sawyer & Co. building in 2003 when renovations were begun to convert the upper floors to residential use.   In 2009 there were now two apartments per floor and the storefront had been restored, albeit without the elaborate Corinthian capitals which once crowned the columns.

photographs by the author
Posted by Tom Miller at 1:10 AM