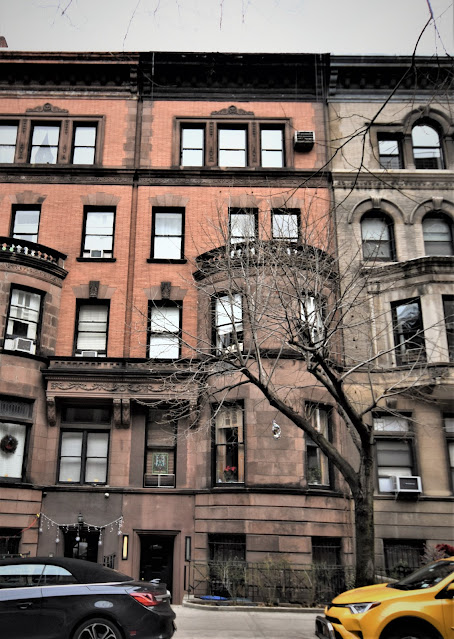 Henry F. Cook acted as developer, architect and contractor in constructing speculative houses in the late 19th century.  In 1895 he embarked on an ambitious project of eight rowhouses on the north side of West 69th Street between Central Park West and Columbus Avenue.
Cook designed his row in the Renaissance Revival style, arranging the dwellings in an off balance A-B-B-C-C-D-E-F configuration.  The mirror-image "C" houses, Nos. 31 and 33, were "of Long Meadow stone and coral brick," as described by The Record & Guide.  Side-by-side dog-legged stoops rose to the balcony-topped entrances.  Rounded bays rose from the basement level through the second floor, terminating in balustraded balconies.  Grouped windows at the top floor sat atop an intermediate cornice, their interior piers decorated with Renaissance-inspired carvings.
On January 2, 1896 The Real Estate Record & Guide reported that No. 31, "one of the handsome row recently completed by Henry F. Cook," had been sold to Theodore K. Pembrook for about $75,000.  (The price would translate to about $2.3 million today.)
Pembrook was a partner in the wholesale dry goods firm of Sweetser, Pembrook  & Co.  He was also a director in the New York Casualty Co. and the Traders' Fire Insurance Co.  Sweetser, Pembrook & Co. was organized in 1868 and by now was described by King's Handbook of New York as "among the most prominent of the dry-goods firms of America."
Pembrook's social status was reflected in his several club members, including the Colonial, the New York Athletic Club, and the Merchant's and the Manhattan Clubs.  He and his wife, the former Bertha Patience Woodruff, had two daughters, Bertha Woodruff and Sara Isabelle. 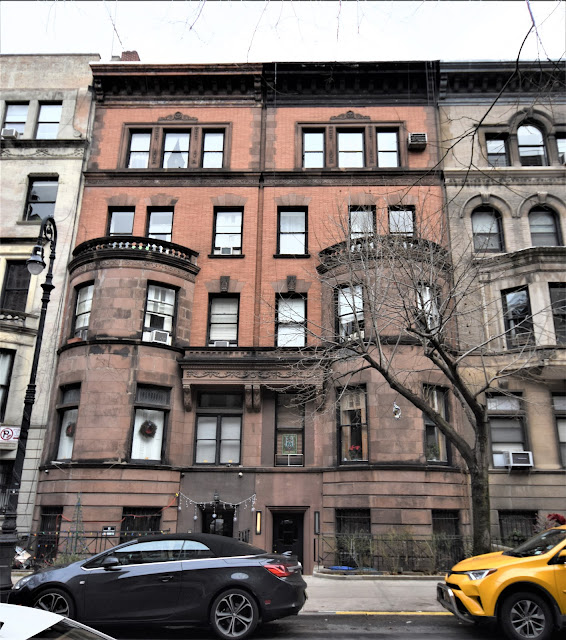 Mirror images, Nos. 31 and 33 shared a balcony created by the creative hoods above the entrances (now windows).
The Pembrooks enjoyed an extended stay in Lakewood, New Jersey for the 1897 Thanksgiving holiday.  On November 28 the New-York Daily Tribune noted "Theodore K. Pembrook and William B. Dowd, of New-York, are out for quail these days, with good results.  Their record for four days is eighty-six birds, and on Tuesday they brought in thirty-four quail and two woodcock."  In a separate article the newspaper reported "Mrs. William A. Pembrook is visiting her son, Theodore K. Pembrook, a New-Yorker, who is here for a long stay."
Interestingly, in addition to being a businessman and huntsman, Pembrook had an artistic side.  He had an art studio on West 68th Street and owned the Lyceum Theatre in Elizabeth, New Jersey.
But things were about to fall apart for the Pembrooks.  On April 10, 1900 The New York Times reported on a judgment against "Theodore K. Pembrook, the artist," for $6,344 (nearly $200,000 today).  In his hearing, Pembrook has said "that there was another judgment against him held by his father's estate for about $8,000."    He claimed he owned no real estate, saying he "did own the property at 31 West Sixty-ninth Street, but it had been foreclosed and sold."  (That was not exactly true.)
In November Pembrook sold the Lyceum Theatre.  He had already transferred his interest in Sweetser, Pembrook & Co. to his mother.  The Pembrooks managed to stay on in No. 31 until August 1903 when Theodore leased the house which he had earlier insisted was not his to Frederick M. Strauss and his wife Julie.  Two years later, on October 5, 1905, Pembrook sold the 22-foot wide house to his tenants.
Strauss was a member of the American Association for the Advancement of Science.  The couple's son, Walter C., was a freshman at Harvard, and son John Francis was an attorney in the law firm of Strauss & Hedges.  More notably, he was a recognized photographer.
Known sometimes simply as J. F. Strauss, he was a co-founder with Alfred Stieglitz in 1902 of the Photo-Secession.  He worked as an associate editor for Camera Work, a quarterly founded by Stieglitz.  The magazine featured a photogravure by Strauss, The Bridge, a haunting shot of the Brooklyn Bridge at night. J. F. Strauss's The Bridge was taken in 1903.  from the collection of the Minneapolis Institute of Art
While living in the 69th Street house J. F. Strauss exhibited his works at impressive venues like the Corcoran Gallery of Art in Washington, the Carnegie Institute in Pittsburgh and the National Arts Club in New York.
Around 1911 the Strausses shared the house with Ernest A. Cardozo.  A widow, the well-to-do attorney had graduated from Columbia University in 1899 and was a member of the Sons of the American Revolution.  He was financially comfortable enough to own a Pierce Arrow automobile.
It appears that John Francis left the family home in 1913.  On December 7, 1912 The Brooklyn Daily Eagle reported that he had purchased Larchmont Manor, the former George Croker estate in Larchmont, New York.  The price he paid would equal just over $2 million today.
Ernest Cardozo was still living with the family in June 1919 when he married Mary Ellen Katon of Cincinnati.  In reporting on the wedding The New York Times mentioned that he also owned a summer home at Allenhurst, New Jersey. 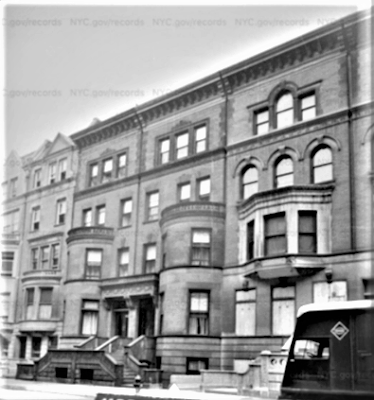 The split, shared stoop was intact when this photo was taken around 1941.  via the NYC Dept of Records & Information Services
The Strauss family remained in the 69th Street house through the 1920's.  In 1938 it was being operated as "furnished rooms," and in 1947 a renovation converted it to two apartments per floor.  Sadly, the stoop--so integral to Henry F. Cook's design--was removed, the entrance converted to a window, and a new, unattractive doorway installed in the former basement level.
Among the first residents was opera singer Dino Yannopoulos.  He was no doubt thrilled to receive a letter from the Metropolitan Opera Association dated March 2, 1949 which said in part, "It is the intention of the management to offer you a contract for the season 1949-50."
Other than replacement windows, the tragic loss of the stoop, and an air conditioner projecting through a hole gouged in the brickwork of the top floor, Henry F. Cook's handsome design is essentially intact.
photographs by the author
Posted by Tom Miller at 1:21 AM