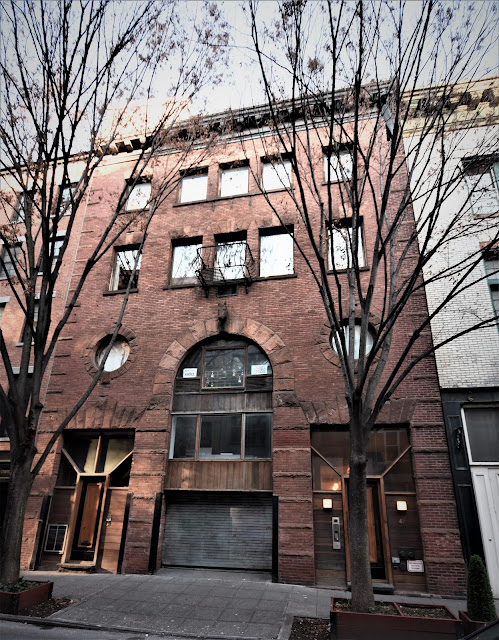 At noon on March 27, 1879 the "four story brick Buildings and Lots Nos. 49 and 51 Downing st., just south of Bedford st." were sold at auction.  Within a decade Downing Street would see change as stables and commercial buildings buildings replaced many of its residences.  In December 1882 the Real Estate Record & Builders' Guide announced that Francis Caragher had purchased the two "brick tenements" for $16,000--about $405,000 today.

Although he was by trade a "carman," the head of a delivery wagon firm, Caragher invested in Greenwich Village investment properties, as well.  He operated Francis Caragher's Sons with his sons, John F. and Joseph A.  The family lived conveniently nearby at No. 110 Leroy Street.  Francis and his wife, Mary, had a married daughter, Sarah L. Gowdy, who lived not far away on West Houston Street.

Francis Caragher's Sons did trucking for many produce merchants.   So involved was the firm in that field that by 1896 John F. Caragher was a member of the New York Produce Exchange, listed in its rolls as "carman."

In April 1893, following Francis Caragher's death, the estate sold several of his investment properties, including a two-story house at No. 131 Charles Street, a three-story "store building" at No. 731 Greenwich Street, a similar building on Washington Street, and a vintage house at No. 44 Morton Street.  But the Caragher siblings had other plans for Nos. 49 and 51 Downing Street.

In February 1896 architects Werner & Windolph filed plans for a four-story "brick stable and dwelling" to cost $18,000 (in the neighborhood of $555,000 by today's terms).  John, Joseph and Sarah were all listed as the owners.

Construction took only seven months and on October 4, 1896 an advertisement in the New York Herald read:

Werner & Windolph had produced a formidable Romanesque Revival style structure of red brick trimmed in chunky, rough cut brownstone.  A massive three-story centered arch enclosed the truck bay.  The flanking entrances were capped by hefty splayed lintels.  Directly above each was a round opening.  Nineteenth century livery stables were often easily recognized by a sculpted horse's head--artistic street advertising that announced they were not private stables.  The carved head at the Downing Stables doubled as the keystone to the entrance arch. 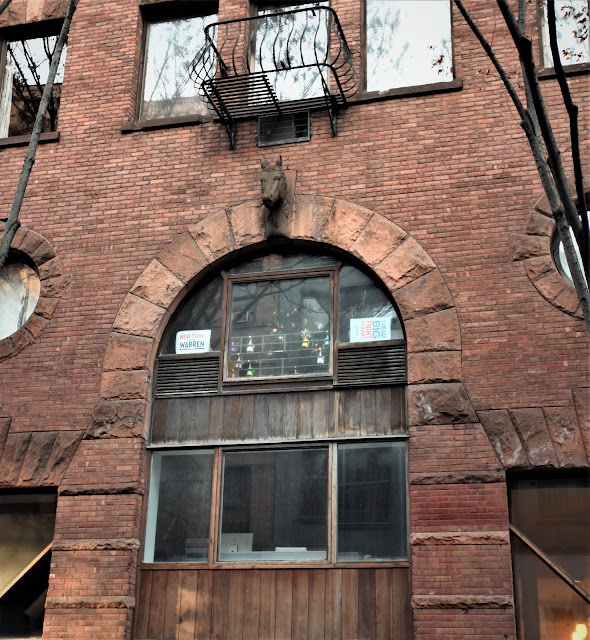 The windows of the two top floors were also given splayed, stone lintels and a pressed metal cornice completed the structure.

The new building doubled as a livery stable and the headquarters of the Francis Caragher's Sons business.  On the top floor was living space for at least one employee.

Among these renting space in the new building for its delivery horses was the Hecker-Jones-Jewell Company, a flour mill on Broome Street.  But problems forced the firm to cease operation on August 20, 1897.  Among the delivery men informed that he was out of a job that day was Thomas Cohen.

The man brought his team back to the Downing Stable for the last time.  As he removed the tack from the horses, he despaired about the turn of events to one of the stable hands.  The New York Press explained "Cohen had a wife and three children, and he was complaining of the hardship that enforced idleness meant to him."  His anger suddenly ended in tragedy.

To stress a point, he slapped the rump of the horse he was working on.  "The horse, though ordinarily docile, was frightened, and he kicked Cohen in the breast," said the article.  Cohen fell to the floor unconscious.  The stable hand summoned a policeman who called for an ambulance.  "The doctor found the imprint of the calks of the horse's shoe on Cohen's breast, and said death had been almost instantaneous."

For years Francis Caragher's Sons operated from the building, mostly delivering produce.  That they maintained a top-notch fleet of trucks and horses was evidenced in the advertisements throughout the years as they replaced both.  On March 28, 1897, for instance, an ad in the New York Herald offered "For Sale--20 seasoned Truck Horses, Francis Caragher's Sons 49 and 51 Downing st."  And in August 1902 another read "For Sale--Six double Trucks and one single.  In good order."

It was not long after that advertisement that Francis Caragher's Sons moved to No. 595 Washington Street and the Downing Street building was leased to the Borden Milk Co.

On March 26, 1906 the building--and the entire block--was nearly lost in a massive fire that broke out in the six-story factory building at Nos. 35-43.   The Annual Report of the Committee on Fire Patrol reported that fifteen other buildings on the block were damaged by the conflagration, including "Nos. 49-51 Downing Street...occupied entirely by the Borden Milk Co. as stables."  Insurance Engineering magazine noted that the building was "considerably" damaged.

Borden Milk Co. remained in the repaired building and in November that year extended its lease with the Caraghers for another five years.

On September 30, 1919 John, Joseph and Sarah transferred their shares in the property to their mother, Mary E. Caragher.  She immediately sold it to the Cincinnati-based furniture manufacturer Globe-Wernicke Company.  The firm had opened its five-story New York headquarters at Nos. 451-453 Broadway three years earlier.  Within a month the New-York Tribune reported "The building will be altered into a garage from plans by Charles Pohl."

But the firm seems to have been indecisive.  Five months later, on February 29, 1920, The Sun reported on a change of architects--now Joseph A. McCarroll.   And then on April 10 The Record & Guide announced that Globe-Wernicke had sold the building to August Costa.

As the Caraghers had done, Costa leased the former stable to a milk company.  The Trinity Dairy Company, Inc. had bought out what the Standard Union called "a long established business" that year.   The Downing Street building became its headquarters.

It maintained two creameries in Pennsylvania--at Clemo and at Honesdale.  On April 30, 1931 the Standard Union stated "The four men employed at the Clemo plant and the twelve at the larger creamery in Honesdale collect and prepare for shipment to New York daily about 5,000 gallons of milk and 1,000 quarts of cream...At the New York end there are eight trucks to deliver to customers in all parts of the city without any delay whatever."

Although the Trinity Dairy Company's long term lease included the "privilege to buy during the occupancy," it left Downing Street in 1937.

The property was sold by the Costa estate in April 1938.  The New York Sun reported it "brought eighty-five bids before it was finally knocked down to O. Stuart White for $21,000."  In fact, White was apparently bidding as an agent for other members of the Costa family.  The owners of record were now Charles and Thomas Costa.

The Costas retained ownership until 1944 when it was sold to George Cuomo and Mildred Magaldi.  They converted the building to a storage facility with garage space on the ground floor for trucks used by the tenant.

As the 20th century drew to a close, little Downing Street was again changing.  The charm of Greenwich Village's vintage architecture and winding streets drew affluent residents to buildings once occupied by factories and stables.  In 1987 the former Downing Stables was converted to a total of ten apartments with the lobby and "accessory garage" on the ground floor. 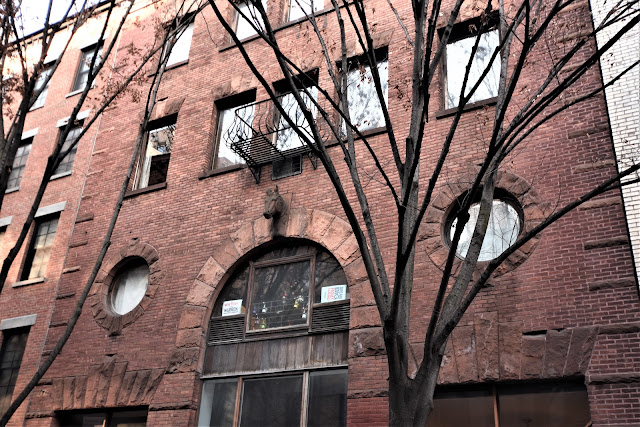 In 1995 Yoko Ono purchased the top floor apartment for her son, Sean Lennon.  Although he lived there for only a few years, she retained ownership until 2013.  The $6.5 million listing described more than 5,700 square feet with three bedrooms and baths, library, a "greenhouse/rec room," and roof deck.  There was also a private building entrance.

The apartment's new owner, real estate developer David Blumenfeld, soon butted heads with the co-op board.  In 2016 he sued claiming the board and the landlord failed to address $1 million in repairs in his apartment.  The Supreme Court judge dismissed the lawsuit and then turned to the board's complaints "that Blumenfeld played party host to a 'constant stream' of club kids and other rowdy guests," according to the New York Post. 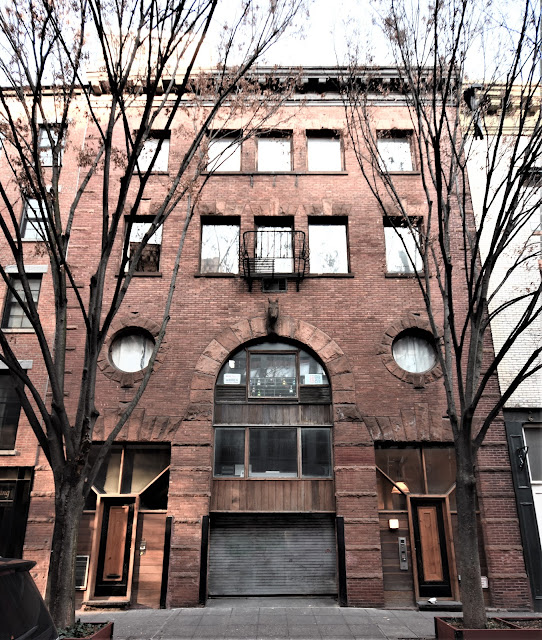 Resident infighting aside, the vintage stable building still impresses after a century and a quarter.  The alterations to the arch and the entrances are certainly not sympathetic to the architecture--some might call them regrettable--but the overall integrity of Werner & Windolph's design survives.

photographs by the author
Posted by Tom Miller at 1:03 AM