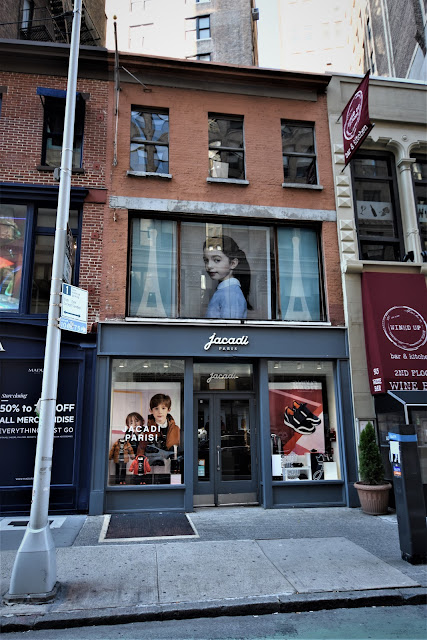 When Albert Horn built his brick-faced house at No. 911 Broadway between 20th and 21st Streets around 1830 development had just begun in the area.  Three blocks to the south Union Square, which would become one of the city's most elegant residential enclaves, was not even in the planning stages yet.

Horn's modest three-story house would have had a short stoop of perhaps two or three steps.  Simple stone sills and an understated cornice reflected the middle-class stature of the residents.

In 1836 Horn sold the property to William Fairman, who owned the property next door at No. 909.  He erected a near-matching house on that lot within a few years.

By 1856 the house was owned by Thomas A. Hunter and his wife, Eliza.  They had a boarder that year, Ebenezer M. Lincoln, a carpenter.  Hunter listed his occupation as cabinet maker, but he changed directions by 1858.  Businesses had already begun appearing along Broadway and Hunter and his wife did not miss out on the opportunity.

By 1858 the ground floor had been converted to Thomas A. Hunter's fancy goods store which shared the space with Eliza A. Hunter's dress making shop.

Mitchell & Seixas remained in the space into the 1870's.  And although it continued to sell books, it is best remembered today for its branching into photography, most notably it portraits of Civil War figures.


In 1882 L. H. Goldsmith established what today would be called a gourmet shop here.  In December 1886 that year he advertised:

George Henry Warren owned Nos. 903 through 911 Broadway at the time, as well as  Nos. 663 and 665 Broadway.   He and other property owners and businessmen along the street revolted against the New York District Railway Company's proposal to erect an elevated train line that year.  The railroad was ready to pay the property owners handsomely for possibly inconvenience.  But when it offered Warren a total of $295,000--a tempting $7.5 million today--he "sent word by his clerk that he refused," according to court a hearing later.

As it turns out, Warren had big plans for his properties.  On February 15, 1890 The Real Estate Record & Builders' Guide reported that McKim, Mead and White were preparing plans for a 7-story office building for Warren.  "The site comprises Nos. 903 to 911 Broadway...The present buildings will be torn down in May."

But for some reason Warren scaled back his ambitious project, stopping short of razing Nos. 909 and 911.  The decision was no doubt a happy one for L. H. Goldsmith, who was still operating in the building.

In 1891 A. Simonson's hair salon moved into the building.  An advertisement in the New-York Tribune on May 21 that year boasted "The Hairdressing Parlor has been trebled its former size to accommodate the constantly increasing patronage.  All the modern improvements and luxurious accommodations, as well as an expert corps of artists, will be found here to attend to hairdressing, shampooing, haircutting, singeing, or hair coloring in any shade."

A. Simonson's catered as well to women who were losing their hair.  An advertisement in The Evening World on May 21, 1892 boasted:

Simonson's Human Hair goods must be examined to realize its immense variety of styles, matchless quality and superb workmanship.  Every possible color in abundance.  Superior accommodations for Hair Dressing.

The lady who wanted "the petite 'Titus' front coiffure, a dainty stylish hair dress, guaranteed natural curly hair" in 1892 would pay "$3 and upward" for the new hair style; about $85.50 today.

The New-York Tribune fashion editor diplomatically side-stepped the issue of thinning hair by calling Simonson "a connoisseur in the art that sometimes rivals, and always remedies, the mistakes and omissions of Dame Nature."  She gave him credit for coming up with what today is known as the hair weave or hair extension.  "Mr. Simonson enjoys the distinction of having invented and patented the Newport coil, an ingenious arrangement for the most perfectly combining the natural hair with an additional braid."

Following George Henry Warren's death, his estate continued to own and manage the building.  In May 1899 the estate joined other business owners in the neighborhood to petition the Board of Aldermen to pave Broadway from 14th Street to 42nd Street.  Calling the street "the most important thoroughfare of this city," they were firm.  "Moreover, your petitions ask that the work shall be begun immediately and completed without unnecessary delay."

By the time of the petition A. Simonson had moved to No. 933 Broadway and the fashionable leather glove store of P. Centemeri & Co. was here.   As was the case with all wearing apparel and accessories, different gloves were necessary for different times or day or various events.  An ad in the New-York Daily Tribune on April 2, 1899 described P. Centemeri & Co.'s gloves as "Distinguished for superb quality, for artistic making, for delicate coloring and for perfect fit."  It offered gloves "for Promenade, Reception and Evening Wear."


In 1906 the Warren estate gave P. Centemeri & Co. what was essentially a new store.  Architect Robert W. Gardner was commissioned to replace the ground floor show windows and install a bay window at the second floor.  At the same time he introduced a simple, galvanized iron replacement cornice.

P. Centemeri & Co. remained in the space until the fall of 1911 when it moved to No. 296 Fifth Avenue.  In 1917 the store was leased to M. Lhowe, dealer in upholstery goods and supplies. 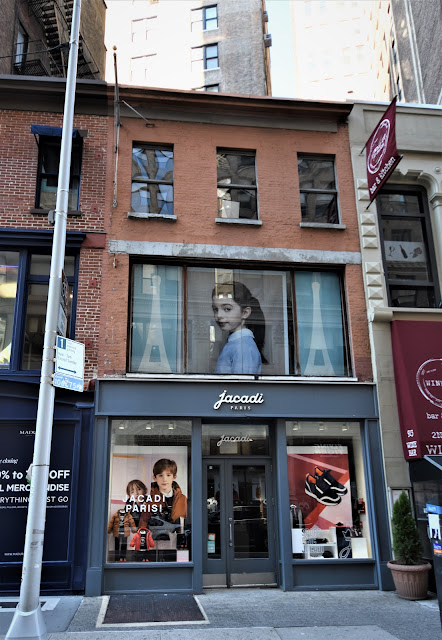 The second half of the 20th century was a bleak time for this section of Broadway and Union Square.  At some point the second floor bay was removed, replaced by flush show windows.  But in the 1990's a renaissance in the district began as buildings around the Square and north along Broadway were renovated.  Most recently No. 911 received an updated storefront in 2013.

photographs by the author
Posted by Tom Miller at 1:05 AM