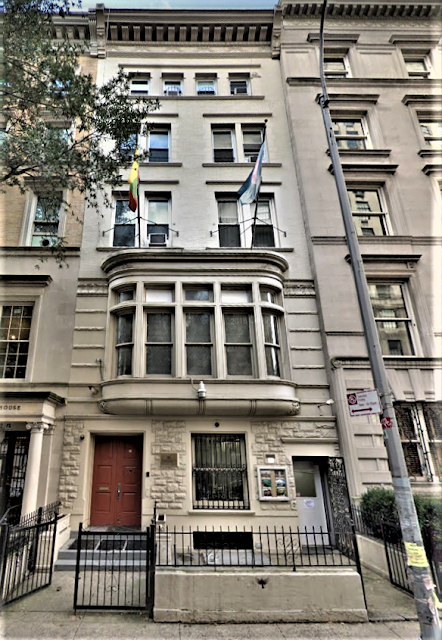 Not only was Richard W. Buckley a partner with Robert McCafferty in the development firm of  McCafferty & Buckley; he was the firm’s architect—a significant cost savings.  In 1895 the partners started construction of seven high-end homes at Nos. 4 through 16 East 77th Street.  Unlike the nearly identical high-stoop brownstones erected a generation earlier; McCafferty & each of Buckley’s handsome neo-Renaissance style residences, completed in 1897, was given its own personality.  Perhaps to compensate for the sloop of the street, the two eastern-most houses were designed on the English basement plan, which provided them with high stone stoops.

Like its neighbors, the central house, No. 10, was 25-feet wide and rose five stories.  An American basement dwelling, its entrance was just two steps above sidewalk level.  The ground floor was clad in a seemingly random arrangement of small, rough-cut blocks.  The understated entrance and the service doorway flanked a window.  Directly above a wide, curved oriel all but engulfed the second floor where planar-faced limestone was interrupted by bands of undressed stone.  The upper three floors were faced in sandy-colored Roman brick and trimmed in limestone.  A pretty frieze of bows and swags ran below a band of egg-and-dart molding under the bracketed cornice.

In 1897 McCafferty & Buckley sold the house to Charlotte Mathilda Tytus, widow of Edward Jefferson Tytus who had died in 1881 at the age of 35.  Tytus had been a partner in the wholesale paper business Tytus, Van Buren & Company.  Moving into the new house with Charlotte was her 20-year-old son, Robb de Peyster Tytus, who graduated from Yale that same year.

It was not long before Charlotte addressed what she apparently felt was a lack of light within the house.  On November 18, 1898 architect W. H. Whittal filed plans for a "new glass and iron skylight."  It was no small project, costing Charlotte the equivalent of more than $28,000 today.

An accomplished artist, Robb's sketches appeared in magazines.  Many of them depicted scenes he captured while traveling abroad with his mother.  He became fascinated with Egypt and, subsequently, archaeology. Before long the Tytuses visited that country annually.  The Washington Times mentioned in 1903 that Robb "is not connected in business in any way in Egypt, but has a dahabieh, on which he and his mother take their winter excursion up the Nile."

The year 1903 was momentous for Robb de Peyster Titus.  The New-York Tribune reported that Yale University "gave him a degree of A. M. for research work in Egypt" and on May 19 he was married to Grace Seeley Henop in Grace Church.  The New Haven, Connecticut newspaper The Daily Morning Journal and Courier called it "one of the largest church weddings of the season."  The New-York Tribune chimed in saying "The church was crowded with friends and acquaintances, among whom the old Knickerbocker element was largely represented."  Indeed, among the families mentioned were Livingstons, Barnes, Stokes, Schieffelin, Gallatin, Duncan, and Potter.

Newspapers nationwide picked up on a detail of Grace's wardrobe.  The South Carolina paper The County Record noted "The buckles on the bride's shoes were of rhine stones, the same worn by Dolly Madison at her wedding."  The New-York Tribune reported "A part of the honeymoon will be spent at the bridegroom's camp in the Adirondacks, and afterward the couple will visit China and Japan, proceeding by way of India and the Red Sea to Egypt for a trip up the Nile next winter."

Robb de Peyster Tytus would go on to have a celebrated, if relatively brief career.  With an English archaeologist he made several excavations in Egypt.  The New York Times later recalled "he obtained from the Khedive of Egypt a concession to make explorations at Luxor, where he found, among other things, that King Amenhotep had built eight bathrooms of cement, with tubs twelve feet long, six feet wide and eighteen inches deep, for the use of the royal family."  In 1907 he was elected to the Massachusetts Legislature.  He and Grace purchased a 1,500-acre estate in Tyringham, Massachusetts where he built a country villa costing more than $2.5 in today's dollars.  He died of tuberculosis of the throat in August 1913.

In the meantime, with her son gone, Charlotte left the East 77th Street house, selling it to J. Horace Harding in March the following year.  In reporting on the sale on April 2, 1904 the Real Estate Record & Guide noted "One of the fixtures of the house is a large pipe organ."

Born in Philadelphia, Harding had entered the banking profession at the age of 20.  In 1898 he married Dorothea Barney, and was taken into her father's banking firm, Charles D. Barney & Co. (it would later become Smith-Barney).  By the time the couple moved into the 77th Street house he was a partner with J. P. Morgan, the chairman of the board of the American Express Company, and a director in two dozen others.

He and Dorothea had four children, Charles, Catherine, Laura, and William Barclay.  The couple were close friends with Henry Clay Frick and his wife and traveled with them to Europe on art-buying trips.  The 77th Street house was filled with irreplaceable masterpieces and antique objets d'art.

Harding was an early automobile enthusiast.  On March 24, 1905 The Sun reported on a shocking turn of events--the Morris Park raceway, long a haunt of the fashionable horse set, would be the scene of an automobile race.  "In the wake of the horse comes the motor car," the article said.  "The tracks of the famous ground where thousands have watched the thoroughbreds is to become a new home for automobile racing this summer."

Highly involved in the revolution was Harding, who had helped form the Morris Park Motor Club earlier that year.  The Sun reported "J. Horace Harding, the Wall Street broker, and J. S. Bunting, both members of the Automobile Club of America, will be vice-president and treasurer, respectively."

His love of mechanized transportation had gotten him in trouble for speeding earlier that year.  On February 20 The Sun reported "Bicycle Policeman Rensselaer saw a machine in which J. Horace Harding, the banker, and a chauffeur were riding.  After a short chase they were overtaken and Mr. Harding went to the station and bailed out the driver, George Sailor."

It would appear that Harding had always intended his family's stay at No. 10 to be temporary.  On November 15, 1905 The Evening Post had reported that construction had begun on a six-story mansion on Fifth Avenue designed by C. H P. Gilbert.  Now, on March 7, 1908 the Record & Guide reported that Harding had sold No. 10.  "He moves around the corner to 953 5th av, a beautiful modern residence."  As an interesting side note, the couple escaped almost certain death by a caprice of fate four years later.  Having toured Egypt with the Fricks, J. Horace and Dorothea took the parlor suite on the new R. M. S. Titanic after J. P. Morgan, who had initially booked the massive space--Suite B 52/54/56--changed his plans.  But nearly at the last minute J. Horace was able to book an earlier ship.  Their suite was then given to the White Star's director, J. Bruce Ismay.

In the meantime, stock broker Edmund Q. Trowbridge, senior member of Trowbridge & Co., was the buyer of the 77th Street house, title to which was put in his wife's name.  He and his wife, the former Gertrude Harrison, had been married in London on July 1, 1901.  Edmund had graduated from Yale University two years earlier. They had two daughters, Nancy and Barbara Harrison Trowbridge.  The family maintained a summer house in Guilford, Connecticut.

The Trowbridges would remain at No. 10 for years.  Barbara attended the exclusive Foxcroft School and was introduced to society in the fall of 1923 at the Colony Club.  On May 15, 1925 her mother hosted a luncheon during which her engagement to Joseph Potter Murphy was announced.  The wedding was held in the 77th Street house on November 4, 1925 with Nancy acting as her sister's maid of honor.  The New York Times noted "Autumn foliage, palms and chrysanthemums decorated the house."

On July 8, 1927 The New York Sun reported that Gertrude had sold the house.  The purchaser was John Howie Wright, president of the Dry Goods Credit Adjustment Corporation and editor of the magazine Postage.  The family's summer home was Seaside Cottage at East Hampton, Long Island.

The Wright's daughter, Anne, enjoyed a privileged upbringing.  On August 26, 1932 The East Hampton Star reported "Forty young summer residents were the guests of Miss Anne Wright on Saturday, at a party arranged by Mrs. John Howie Wright at the Devon Yacht Club, in celebration of her daughter's 12th birthday."

The house was the scene of a society wedding on September 4, 1937.  The Mount Vernon, New York newspaper The Daily Argus reported that Betty Devine, Mrs. Wright's niece, would was married to George Byron Smith, 2nd, here.  Both of their families lived in Pelham.  Anne was a bridesmaid.

As Anne grew the social spotlight turned to her.  Her coming out was celebrated in the fall of 1938.  On November 14, 1938 The New York Sun reported, "Miss Anne Wright, debutante daughter of Mr. and Mrs. John H. Wright of 10 East Seventy-seventh street...will participate in the cavalcade of dances to be staged by Ned Wayburn as the feature of the Miami-Biltmore fashion show and ball to be held on December 16 at the Waldorf-Astoria as a benefit for the Goddard Neighborhood Center."

And a month later, on December 6, the newspaper wrote, "Miss Anne Wright, member of the junior committee for the Caucasian Allaverdy Ball to be held at the Plaza on December 9, agave a tea yesterday at her home, 10 East Seventy-seventh street, for the other members of the committee."

The Wrights sold No. 10 in July 1943, and in 1950 it was purchased by Daniel Saidenberg and his wife, Eleanor Block.  Although Saidenberg's career had been as a cellist and conductor, and Eleanor had been a professional dancer in Chicago, they were now focused on modern European art.  Eleanor had been working as a private art dealer since soon after moving to New York in 1943.  Now the ground floor of No. 10 became the Saidenberg Gallery.

Theirs was a significant venue.  In December 1955 they opened a Picasso exhibition, and they showed the works of artists like Paul Klee and George Braque.  On November 10, 1959 The New York Times' John Canaday wrote "Picasso is with us again, this time in an exhibition called 'Faces and Figures' at the Saidenberg Gallery, 10 East Seventy-seventh Street.  For some reason the master's social aplomb is more apparent than usual.  The seventeen paintigs are dominated by half a dozen of such witty elegance that the charging bull of modern art appears to have been caught in a moment of atypical amiability."


The Saidenbergs sold No. 10 in January 1964 to the Government of the Union of Burma for use as its Permanent Mission to the United Nations.  The New York Times reported the $300,000 price was paid in cash.  Now the Permanent Mission of Myanmar, it continues to own the property.
Posted by Tom Miller at 2:16 AM