The "three-story, high stoop house," as described by the New-York Tribune in 1881, at No 454 West 22nd Street was an extraordinary 28-feet wide, easily qualifying it as a mansion  It was the home of the H. Sylvester Bosworth family at the time.

In 1892 the Association of Trained Nurses acquired No. 454 as a sort of hotel-clubhouse for nurses.  As it prepared to open, The World explained on November 4 "Those who want to take up their residence at once in the home may, by paying a certain rent per week, obtain apartments for their individual use.  Table board can be furnished on a large scale for nurses who live in the home, as well as for those who wish to drop in for meals and recreation.  A large laundry will be a most necessary part of the institution."

The scheme did not work out as a home solely for nurses, and by 1894 had become The Carolyn, what the New York Herald described on May 28 as, "Formerly a handsome private residence, but converted into a boarding house for working women."  But at the time of that article, the end was near for the venerable old dwelling.

On January 16, 1897 the New York Journal reported that "No. 454 West Twenty-second street, an old building," had been sold to William W. Gallagher "for immediate improvement."  The term "improvement" was universally understood to mean demolition and replacement.

Gallagher had apparently already hired the well-known architectural team of Neville & Bagge to design a modern apartment building on the site.  And he wasted little time.  Just over two weeks after the New York Journal's article demolition was well under way.  And the site soon became the scene of unspeakable tragedy.

On February 1 the New York Herald reported the heart-wrenching story of Daniel Riordan.  "A little hope came into the life of the Riordans when the husband got a job after seven weeks' idleness and had a prospect of earning something to warm and feed his bed ridden wife and miserable children.  That hope dawned on last Wednesday."

Riordan had found a job with "a contractor who tears down buildings," said the article, adding "It was perilous work."  The job came at when the couple were desperate.  "They had too many children already...and while the man looked for work he knew that there would be another mouth to feed."  To make matters worse, Riordan's pregnant wife was essentially crippled with inflammatory rheumatism.

The Irish laborer worked all day Friday and was back the following day.  He was on the top floor of the house when, at around 4:00, he fell four floors to the basement.  He died at the New York Hospital at around 6:30.

Riordan's sister and her husband, who had held vigil at the hospital nearly the entire time, now had to face his family.  "Then there was the helpless widow to be told.  There was the body to be taken from the hospital, and how were they to give it decent burial?" wrote the New York Herald.  In dramatic Victorian prose, the article continued "They carried Daniel Riordan, battered and dead up into the dark tenement he had called home yesterday, and set the body down in a room next to that in which lay his crippled widow...In the tenement last night there was a weeping company about the dead man and another about the stricken widow, and none could think of a word or a hope to make the thing look better."

The five-story structure, named L' Monette, was completed by the fall.  Orange brick above the first floor was trimmed in starkly contrasting brownstone.  Neville & Bagge's design was a surprising marriage of styles.

Renaissance Revival took the lead role, appearing not only in the carved panels of the pilasters and entablature of the entrance, but in the handsome architrave surrounds and pediments of the central upper openings.   Surprisingly, neo-Federal elements appeared in the modified Gibbs surrounds of the end windows on the second through fourth floors, and in the splayed lintels of the fifth.  Hefty brownstone quoins rose to the cast metal cornice.  There were three apartments per floor.

William W. Gallagher was in the business of real estate development and apparently had no intentions of running an apartment building.  He sold the newly-completed L' Monette to M. Jacoby in October 1897.  Jacoby's subsequent advertisement read:

The rent was surprisingly affordable, at least by today's standards.  The highest listed in the ad would equal just over $1,000 per month today.

L' Monette filled with a wide range of tenants.  Among the initial occupants were Albert C. Reuter, who worked as an engraver; John Furman, a clerk; and former bookkeeper Max Rosenburg and his wife.

Rosenburg was 27-years-old when the couple moved in.  He had a history of financially irresponsibility which would result in his stay in L' Monette being short.  On December 10, 1897 the New York Herald explained "Rosenberg, when he was twenty-one years old fell heir to several thousand dollars.  When this was gone his mother invested money for him in a coal yard at the corner of Sixty-fifth street and Third avenue.  He did not succeed there and sold out after running the place a few months."

After that he married "a Mrs. Steinhardt" and found a job as a bookkeeper.  He did not succeed at that, either, was was soon fired.  With no income he devised a new way to make money:  forgery.  But he was not very good at that profession, either.  He passed two fake checks, one for $21 from a Third Avenue druggist and another for $10 from a restaurant owner on the same street.  He was a prisoner in the Yorkville Court on December 9.

Five months later J. Duke Murray's name appeared in the newspapers for far less scandalous reasons.  For years he had been the business manager of the Grand Opera House not far away at the corner of Eighth Avenue and 23rd Street.   On May 21, 1898 The New York Dramatic Mirror reported on his "retirement" from that position; although it appeared to everyone that there had been a rift between him and manager Augustus Pitou.

Those suspicions were heightened four months later.  Murray still had his house pass and he used it to gain admission on September 21.  The Morning Telegraph reported the following day, "It appears that Mr. Murray had a pass for the evening's performance and upon entering the theatre took a rear seat.  The usher asked him to move for some reason or other, and during the melee that followed Mr. Murray soundly thrashed his former employee."

Murray was born in Edinburgh, Scotland, and had been brought to America while still an infant.  He started out his career as an actor and was first noticed in his role as Smike in Nicholas Nickleby.  He gave up acting for management in 1878. In 1889 he married the stage star Mary Davenport, who lived with him in L' Monette.

The New York Dramatic Mirror's description of him in April 1893 helps explain how he so soundly "thrashed" the usher.  "Mr. Murray is a man of commanding physique, standing six feet in his stockings and tipping the beam at 225 pounds."

The middle class tenants of L' Monette had small staffs and advertisements for help such as chamber maids and cooks routinely appeared in the newspapers.  The residents were, nonetheless, not wealthy.  At the turn of the century, for instance, Leland Potter was a fire fighter and Edward J. Dwyer was a Commissioner of Deeds, an appointed civil service position similar to a notary public.

Leland Potter's firehouse, Hook & Ladder Company No. 11, responded to a major gas main explosion in the basement of a seven-story tenement on Avenue C on November 11, 1902.  The disaster resulted in one dead and 40 injured, including Potter.  The 27-year old was taken to Bellevue Hospital where his scalp wounds were treated before being driven home to his wife.

The Fourteenth Street Theatre was staging Foxy Grandpa earlier that year.  L' Monette resident Mrs. Jane Calvin attended a performance on May 10 and took her baby along with her.  As she prepared to leave the theater, she was suddenly taken ill.  The Sunday Telegraph reported "Her illness made it necessary that she go at once to a neighboring drug store...Frank Abbott, manager of the show, politely volunteered to hold the baby."

Jane disappeared into the crowd.  She did not return.  "Abbott carried the baby into the box office and received the ironical congratulations of his friends on being so easy."  As midnight neared, he was convinced he had been duped and was about to call a cab for the nearest founding hospital.  And then Jane Calvin came rushing, breathless, back.

The article said "She had gone home after her failure to get what she wanted in the drug store, and found a fire on the block."  Although detained by the emergency, she was not concerned.

"I knew that baby was in good hands so I didn't hurry," she reportedly explained. "How is the little darling?"

"'The idea!' mamma exclaimed.  And that's all the thanks Abbott got."

J. Duke Murray and Mary Davenport were in California in 1917.  Mary died in Fresno on June 26, and her husband died there five months later.

The building had lost its French moniker by now, identified only by the street number.  It continued to be home to middle class tenants like Mrs. Mary Holder.  She dropped her billfold on the way to work in the spring of 1922.  Her advertisement in The Evening Telegraph on April 2 said it had contained $100 and offered a liberal reward.  It is questionable whether the finder would consider the reward worth the cash inside--equal to about $1,500 today.

The Federal Government kept close tabs on socialists and communists in the Depression years.  The practice was understandable considering that labor groups were responsible for bombings and other terrorist incidents.  In 1936 resident Thomas Drosin was listed among The Names and Addresses of the Voters for the Communist Party Ticket. 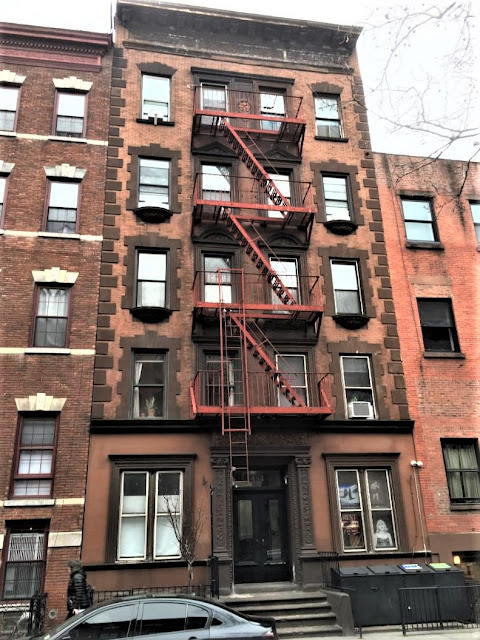 Little had changed to the handsome, if architecturally quirky, building.  A 1988 renovation retained the original configuration of four apartments on the ground floor and three on the upper floors.