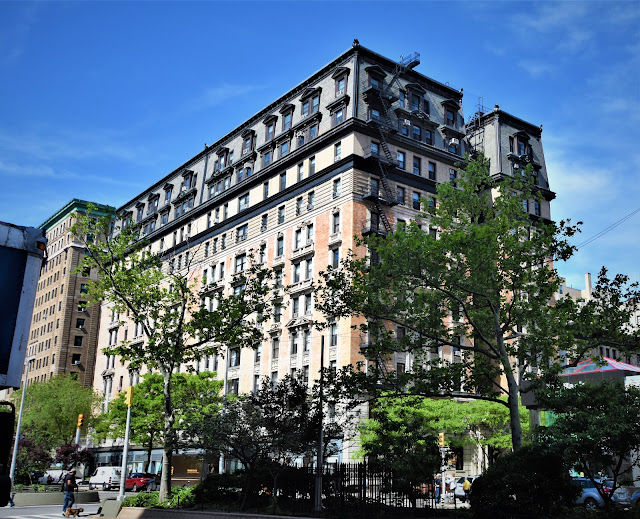 While development continued with a fury throughout most of the Upper West Wide in the 1890's, the district around what was known as Schuyler Square (later Strauss Park) was ignored.  The fact was, there was no convenient way to get there.

But that was all about to change.  In 1894 plans were announced for the city's first subway line, which included stops at West 96th Street and West 110th Street.  Developers descended upon the vacant plots.  In 1897 construction began on the first apartment building in the Schuyler Square neighborhood, and by the end of the following year the number had risen to six.

On May 29, 1899 John W. Noble, Jr. purchased the property on the western side of Broadway between 108th and 109th Street from Jacob D. Butler.  The Record & Guide noted that the site included two, two-story wooden buildings and vacant plots.  Of the staggering $255,000 price (nearly $7.8 million today), Noble mortgaged about half from Butler.

Noble partnered with his brother, William, to construct two matching apartment buildings on the site.  William was already well-known in real estate circles as a building contractor and developer, responsible for several large hotels and apartment houses throughout the city.   The pair, under the name William Noble & Co., hired Joseph Wolf to design the upscale structure that would be known as The Manhasset.

Wolf filed plans for an eight-story "brick and stone" apartment house.  The two sections successfully pretended to be a single building.  Their two-story rusticated stone base upheld a five-story central section of pink-beige brick decorated with contrasting stone in the form of pseudo balconies, broken pediments, and cartouches.

But construction had barely begun when trouble came.  The Record & Guide later commented that William Noble "occupied a prominent position as a builder, but was unfortunate in his ventures.  With both the Grenoble and Empire Hotel, which were his most important undertakings in this city, he met with lose, nor was he luckier with some other building ventures."

It came to a disastrous end in 1899, with construction of The Manhasset still underway.  Noble filed for voluntary bankruptcy "for $1,000,000" as reported in The Record & Guide.  The amount would be more than 30 times that much today.

William Noble & Co., however, limped along long enough to see the buildings finished in 1901, the same year that Jacob D. Butler foreclosed.  But Butler had grander plans.  On February 15, 1902 the Record & Guide announced he would "add three stories and a roof garden" to the buildings.  "He also arranged for an electric cab service from the building to the L station for the convenience of tenants."

Rather than bring Joseph Wolf back to make made the enlargements, Butler hired Janes & Leo.  The firm designed the top two of the additional three floors as a nearly vertical slate-covered mansard.  Additionally, they placed majestic stone entrances within the light courts.


The original interior layout was changed, as well, nearly doubling the original number of apartments.  An advertisement explained "With its 200 feet frontage on Broadway the Manhasset has six apartments on each floor in suites of six, seven and nine rooms, and one, two and three baths."  In noted that along with "every modern improvement," there were "four elevators, two for the exclusive use of tenants and two for servants and freight."

Butler had put the title of the property in the name of his wife, Carrie.  The couple sold The Manhasset for $3 million in January 1910 to the newly-formed Realty Assets Company.   The firm immediately set out to convert the Broadway street level to shops--a project that turned out to be a massive undertaking.  Architect Clarence Shunway's 14 storefronts under a metal cornice required serious underpinning of the heavy structure. 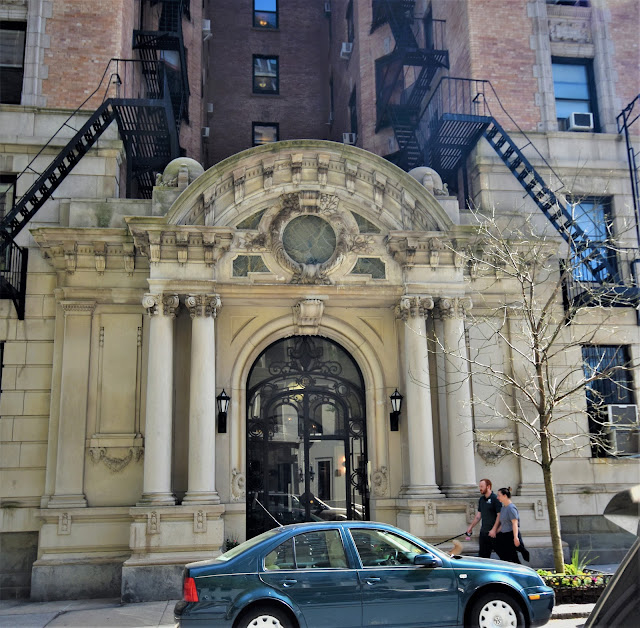 On December 17 that year The Record & Guide pointed out that "altering the first story into a number of stores was a very complicated structural feat, as well as an expensive one."  While the plans, filed in July, estimated that cost at $1.6 million in current dollars, the article felt it "probably does not fully cover the cost to the owners."  (And, indeed, that same week The Engineering Record adjusted the price tag to $75,000--more than $2 million today.)

Replacing the Broadway facade was the simple part.  The foundations had to be extended four feet deeper.  The Guide noted that amazingly, "While the work was going on the upper part of the building was undisturbed."


The Engineering Record reported "The shoring and steel work have now been successfully accomplished without accident and without interfering with any tenants or with any portion of the building."

One of the tenants apparently not disturbed, at least by the ongoing construction, was H. S. Morse.  Instead, it was bees that bothered him.   Morse owned the nearby tennis court behind the building.  When he went there to play on Monday, May 30 that year he found it, according to The New York Times, "occupied by thousands of bees which had apparently cruised across the Hudson from the Jersey shore."

His court keeper assured Morse there was no danger, "as bees never stung people in May."  Morse was unconvinced.   He began throwing stones at a post which had become covered in bees "fully six inches deep."   The swarm was only momentarily annoyed, and they quickly returned.

Before long locals gathered, offering any number of solutions to Morse's bee problem.  "One man brought a barrel with molasses in it and a box to cover over the end when the insects went in after the syrup," reported The Times, "but the bees just droned away on the post and appeared to be having a convention to decide on the price of honey this Summer."

Eventually the tennis players decided that the bees, indeed, did not sting in May and played on all afternoon.  Nevertheless, the bees' unwilling landlord was intent on evicting them.  "Mr. Morse said it was a case of either moving the court or the bees.  He added that to any person who could make use of them the bees were worth money and he didn't care how soon some one came along and took them away."

Frank N. Hoffstot, president of the Pressed Steel Car Company, purchased The Manhasset in May 1919.  He was delving into real estate investment at the time, having recently purchased Euclid Hall on Broadway between 85th and 86th Streets.  In reporting on the sale, the New-York Tribune noted "He has no present intention of altering the Manhasset."  The building would change hands at least once before being lost in foreclosure in 1932.

One of the Broadway shops was occupied as a Western Union Telegraph Company branch in 1941.  On the morning of September 14 that year the office was staffed by three young employees, including 25 year old Mary Mitchell,, when three well-dressed men entered at around 11:40.

One of them mumbled something to Mary, which she did not understand.  The New York Times said that Western Union employees were "under instructions to be polite at all times," so Mary replied "Pardon me. sir, I didn't hear you."  This time he made himself clear.

The three employees were ordered into a rear room and the supposed gunmen (they merely held heir hands in their pockets to suggest being armed) grabbed $60 from the cash register and ran.  The headline of The Times article read "Never Omit Courtesy / Western Union Girls Do Not Except Stick-Up Men."

By 1963 the building was home, rather unexpectedly, to the Eastern Trading Company.  Far from New York's Chinatown, it was the source of hard-to-find authentic ingredients for chef Florence Lin, who taught Chinese cuisine at the China Institute.

Three years later The New York Times culinary columnist Craig Claiborne interviewed Grace Chu, author of The Pleasures of Chinese Cooking.  Like Florence Lin, she advised that the ingredients (including the chopsticks) could be found at the Eastern Trading Company in The Manhasset.

The Asian tradition continued when East Wind Trading Company opened by 1973.  On October 8 that year The Times journalist Richard P. Shepard called it "a commodious, neatly laid out store dealing in food, literature and various articles from China."

The Health Department was not so enthusiastic, slapping Rainbow Chicken with violations in August the following year.  But the little restaurant persevered and nearly a decade later The Times was still a fan, saying on July 2, 1995, it "makes a good grilled chicken, crisp around the edges and juicy."

On March 11, 1999 The Manhasset was two weeks away from the completion of a $2.5 million renovation.  That afternoon a devastating eight-alarm fire started in a ground floor restaurant and swept through the building.  The tenants were, as The Times worded it, "abruptly homeless."  Among them was 104-year old Louise Stern who had moved into her apartment in the 1940's.  She told reporters "The firemen carried me down.  We had to get out in a hurry."

Louise had been unaware where was a fire and when she heard a banging on the door, she shuffled over with her walker to answer it.  Although she did not remember much about the incident, neighbors later recalled she opened the door to the firemen and said "Please come in gentlemen.  I'm sorry I cannot offer you any tea."

Robert C. Cornell narrowly escaped his 10-floor apartment by climbing out a window and "inching along a ledge in bare feet," as he later described.   Denise Pelligrini, her husband Laddie de Paur, were at work.  Mr. de Paur's 72-year old mother was babysitting their three children (the youngest only 16 months old) in their 11th floor apartment.  The elderly woman opened the door with the infant in her arms, to see fire.

With the renovation still underway, there was a workman on the scaffolding outside the window.  Mrs. de Paur handed the baby to him.  A fire fighter then helped the rest of the family climb out the window to a safer lower floor where they waited to be evacuated.

Of the 134 apartments, half were rent-regulated and the other half were co-ops.  Three months after the fire The Times described the residents as being "as diverse as the Upper West Side itself.  There were single people sharing the rents on modest apartments and freelancers who worked at home.  There were elderly people who were able to remain in the neighborhood because of regulated rents and Social Security, but who are now struggling to rent a temporary shelter on their limited fixed incomes." 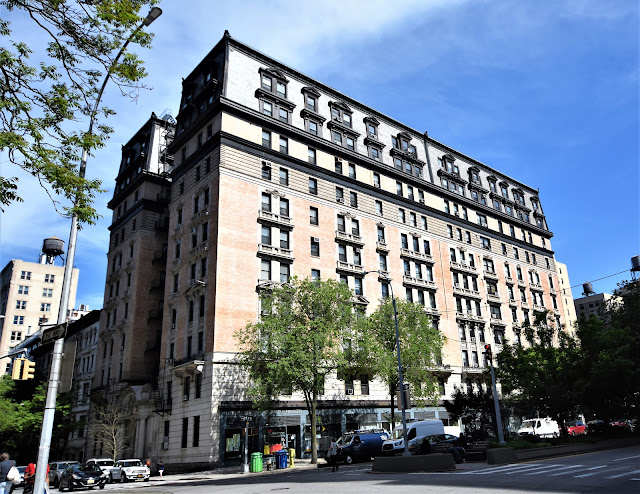 While the north end of the building was devastated, tenants in the 108th Street section were able to return to their apartments within a few months.  Today no hint of the fire remains and the majestic Manhasset still commands the same attention it did more than 110 years ago.